"The Saddle" by Perception

I was given something to me by a friend called "The Saddle". It's a polyethylene seating/kneeling platform for canoes. It was made by a company called Perception in SC who appears to still make Kayaks today. I found some pics online and it appears to mount between the thwart and yoke and most likely attached to the hull in some way. I'm not sure I'll ever use it but thought it was interesting and would create some interesting discussion.. Has anyone had any experience with this saddle? What are your thoughts? 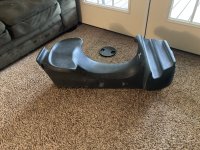 intended for short whitewater boats I believe. The moulded knee retainers made for easy in/out compared to strap systems. These boats wouldn’t have had a yoke. The saddle was set pretty central so that the paddler’s weight was evenly distributed fore and aft.
P

Yes, I have had one in several solo whitewater canoes and still have two of them laying around in my garage/workshop. They were very popular in whitewater canoes back in the 1980s and early 1990s. One seldom sees them today.

It was an interesting design concept and in some ways a forerunner to the minicell foam bulkhead/pedestals in many whitewater open boats today. In order to properly position them in a solo canoe requires two thwarts. One thwart needed to be forward of center and the other rear of center. The rear attachment utilized an upside-down U shaped stainless steel bracket attached to the underside of the thwart with stainless steel machine screws or sheet metal screws. The U shaped bracket ends slid down into the recesses on either side of the far rear end of the saddle The front attachment required long stainless machine screws that went through the front thwart and then through the plastic of the saddle at the far front end. In order to have the pedestal at a reasonable height for most people and most boats, the whole thing had to be blocked up on a rectangle of Ethafoam on the bottom of the hull.

There were lots of problems with this saddle. One is that although it was possible to glue additional pieces of minicell or other foam to the top of the saddle or the underside of the "wings", the saddle could not be shaped like modern minicell pedestals can be. The seating surface of the pedestal itself was quite narrow and uncomfortable for many. What is worse the "wings" were positioned too close together for a good kneeling stance for most boats and most paddlers of above-average or even average size. And the saddles are much heavier than minicell pedestals. On the other side of the coin, the saddle does provide some interior storage but the Beckman hatch rings at the front of the saddle tended to crack and the hatches usually leaked at least a bit of water. Smaller items put inside the saddle often wound up in recesses near the aft end of the saddle and could be quite hard to retrieve. Lastly, the wide "bicycle seat" at the back of the saddle was intended to allow the option of sitting up and relaxing during the placid stretches. But using this usually placed the paddler's center of gravity too high for stability and positioning your legs around or under the wings when sitting was problematical, especially in a narrow canoe.

A modern minicell bulkhead pedestal offers almost all of the advantages of this rotomolded PE saddle and none of the disadvantages.

Here is what one looks like installed in a very early Royalex whitewater solo canoe: 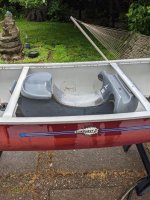 The first canoe I ever purchased was a Whitesell Descender and it came with a Perception saddle installed. I bought it to take on a Colorado river trip.
P

Johnny 5 said:
The first canoe I ever purchased was a Whitesell Descender and it came with a Perception saddle installed. I bought it to take on a Colorado river trip.
Click to expand...

I think that Nolan Whitesell installed Perception saddles in all of the boats he sold unless the buyer requested otherwise.

The Perception saddle came installed in my canoe with adjustable toe clips. It was and is the only saddle I have ever used in a canoe so I cannot make any comparisons. I felt that it offered excellent control.
Last edited: Apr 19, 2022

I have one that I took out of MR ME hull. Still don't know what to do with it. If anyone wants it and is in the NH area it's yours for free. It may end up on the side of the road for free at some point!

I put a Perception saddle in a Mad River ME I bought from John Berry in 1983, which motivated him to buy one to install in his teaching fleet of ME's.

Nolan Whitesell put them as standard equipment in his canoes, including adjustable toe toe blocks drilled through the foam block that had to be placed under the saddle and glued to the canoe bottom. I bought my Piranha from Nolan after we paddled the Ocoee and Section IV of the Chatooga with him in 1986. I still have it. Here's Nolan in later years: 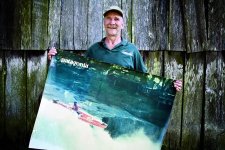 Our CT AMC club installed a Perception saddle in our rental Blue Hole Sunburst II, which became our most popular rental canoe. The saddle broke loose from the glued bottom on me on the Rapid River in Maine when I was doing a strong low brace, causing me to lose balance and swim right above Smooth Ledge, where legendary squirt boater Jim Snyder happened to be teaching Mystery Move classes. Embarrassing.

One of our club couples put three Perception saddles in an ME for both tandem and solo paddling, but decided the canoe was too hot for them after all that work. It was a heavy sucker.

There were blocky foam saddles wedged under two thwarts long before the Perception saddle, which was intended to improve upon their ergonomics and do away with thigh straps. I liked the Perception saddle a lot, except for its weight. It fit me well. The storage wasn't all that useful, as the hatch was very hard to twist open, especially with cold and wet hands. The high rear sitting surface was usable if you had good balance, a wide canoe like the Piranha, or both.

Bob Foote came out with his own version of a plastic saddle a couple of years later, called the Grand Canyon saddle. It used thigh straps and had depressions for two bottles and an ammo box in front, and bungee cords to hold a rope bag in back. My club had one of those in a canoe, too, and I know planc has or had one in his collection. 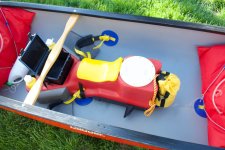 Later, I preferred custom-fitted, hand-carved foam pedestals with hip blocks secured under one rear thwart, offered by Tom Foster and John Kazimierczyk and perhaps others.
P

Yes, my Bob Foote Grand Canyon saddle is also gathering dust in my workshop and keeping my Perception saddles company. Of the two, I much preferred the Grand Canyon saddle to the Perception saddle, although I did glue some flat pieces of 3/4" thick minicell to the sides to widen the seating area a bit. The Grand Canyon provided a much better knee spread for me and had more easily accessible and usable interior storage. One of the "selling points" that Bob claimed for this saddle was that if you bought an additional set of vinyl anchors you could move this saddle from one boat to another, although I never did that. I did however, have one boat, a Dagger Caper, that was originally outfitted as a tandem with two kneeling thwarts that I used as a solo tripping boat on Class II-III whitewater rivers and when doing so I used the Grand Canyon saddle and removed the two kneeling thwarts.

But like the Perception saddle the Grand Canyon saddle was much heavier than a comparable minicell saddle and apart from the interior storage it offered no real advantages over a minicell pedestal. It is also quite possible to devise a removable minicell pedestal if you want a removable saddle. The Grand Canyon saddle was also dependent on the integrity of the five vinyl anchors bonded to the hull to keep it securely positioned. On one memorable run on the Tellico River I took my Dagger Prophet equipped with Bob Foote saddle but failed to check the vinyl anchors. I bonded the anchors to the boat with vinyl adhesive which has a tendency to degrade over time. When I got to the river after a several hour drive on a warm, sunny day I found that two of the five anchors had become detached. After the first couple of rapids the remaining three gave way and thereafter I was simply sitting on the saddle which was no longer attached to the boat.
S

I have a Whitesell Descender and would LOVE to get my hands on one of these Perception saddles. It’d be cool to put it back to its original state. I’m aware of the weight and other performance issues, but I still think it’d be fun to run it that way for a while.
If anyone here is willing to ship to Arkansas, please let me know.

dougd said:
I have one that I took out of MR ME hull. Still don't know what to do with it. If anyone wants it and is in the NH area it's yours for free. It may end up on the side of the road for free at some point!

Oh no, don’t do that. If possible, I’d buy it and pay for the shipping if you’re willing to put up with the hassle. I live in Arkansas.

Blane said:
I was given something to me by a friend called "The Saddle". It's a polyethylene seating/kneeling platform for canoes. It was made by a company called Perception in SC who appears to still make Kayaks today. I found some pics online and it appears to mount between the thwart and yoke and most likely attached to the hull in some way. I'm not sure I'll ever use it but thought it was interesting and would create some interesting discussion.. Has anyone had any experience with this saddle? What are your thoughts?

Do you still have this or have you sold it already? I'd be interested if it's still available. Thanks.

bwr3rd said:
Do you still have this or have you sold it already? I'd be interested if it's still available. Thanks.
Click to expand...

Blane said:
I still have it. How’s $30 plus shipping sound?
Click to expand...