Should you have to pay the costs of a rescue?

alsg said:
That's an excellent point and may explain why the guy wasn't able to make a rescue attempt himself.

Also, not being there, it's hard to tell just how significant the upstream rapids were. I know that stuff that looks big and bouncy when you go down through it often looks pretty tame when viewed from downstream looking back up.
Click to expand...

Here's a picture of the rapid just upstream of where they put in, you can see it as Son starts to wade the boat to where he pulls it out of the water. It should be noted that you can see at the put-in and immediately afterwards (plus many other places) that the water levels were very high even though they were below the peak (all of northern Ontario had record setting levels this spring). In a normal year and especially later in the season the upstream rapid would be not much of anything even at high levels if you were coming downstream. Going upstream is a different story, the calm water was on their left so they would have paddled on that side, when they reached the "rapid" you can see that the left is blocked, not 100% sure, it could be a tree or maybe it's the "ledge" that creates the rapid, a part that normally would be fully out of the water. In any event, paddle up to the "rapid and then turn to get around the obstruction, bow enters the current, boat turns sharply, bad leaning and over you go into deep water with strong current with a very scary swim not far away. 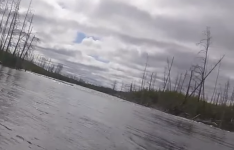 Here is a Satellite image of the rapid, flow is right to left, they were travelling left to right. The water levels are much lower, there is no water going through the overflow channel where you can see the normal portage. The island appear much bigger but for them everything except the tree was under water. You can see the obstuction, about 70m upstream from the island/portage put-in. There is no obvious sign of a rapid there, perhaps a swift, the resolution isn't good enough to determine. One thing for sure 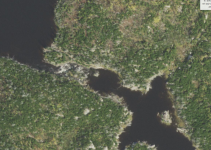 I think you all are too hard on this young man. They put in way too early, but having read the survival book (who lives, who dies and why - see books thread), even extremely experienced people make these kinds of mistakes or worse. One of the examples in the book concerns experienced guides launching into a river obviously in flood.

I think one of the biggest mistakes we make is believing ourselves immune from stupid mistakes.

I dumped once when about 13 years old into ice cold water. To this day I recall the sharp automatic intake of breath and total inability to think or move normally. Experience helps, but thinking you can fight and win over autonomic responses…

It looks to me like that island is too far away to use a 50 ft throw rope.

While the current was strong, the water may have been too shallow in places to successfully ferry.

Filming? I think that is just the younger generation.

Now, did they require a rescue? Don’t know. Not enough info. I wasn’t there.

BTW, Spot subscription comes with rescue insurance. I know. I have it and recently confirmed it with them.

I also had what I thought was SPOT insurance for a while, but recall that it might have had strict limitations, as was indicated when I carried it ( as a race rule mandated requirement) during Yukon River races. GEOS provides S.O.S. monitoring and emergency dispatch through the dedicated International Emergency Rescue Coordination Centre (IERCC) based in Houston, TX

What you need to know about Spot®, inReach® and Rescue!

The GEOS Membership is not an insurance policy it is a “pre-paid” service that allows you to draw from the pot, up to $100K for your Search and or Rescue. But there is a catch; GEOS services must dispatch your rescue (policy is for the Spot owner only, not for companions). This means that if someone else dispatches A.L.E.R.T or any other helicopter extraction or dispatches a local Search and Rescue Team you will not be covered.

So the way to insure that your special GEOS membership covers the cost of getting you out of the backcountry you must let them dispatch the services to help you, no exceptions.
Last edited: Jul 20, 2022
R

Always gotta know what the “gotchas” are!

My conclusion was to the GEOS membership would never pay in US and Canada, where bonafide rescues seem to be covered. I'd always pay the local fees like (I think) in New Hampshire and Colorado. Wish more states or regions did that.

Thanks for the heads up yknpdl. Good to know.

Spot instructions do advise you NOT to ask for friends/family help if you are going to press SOS button. Reason stated is that it gets rescue efforts working at cross purposes.

billconner said:
My conclusion was to the GEOS membership would never pay in US and Canada, where bonafide rescues seem to be covered. I'd always pay the local fees like (I think) in New Hampshire and Colorado. Wish more states or regions did that.
Click to expand...

There are no fees for NH if your accident was not due to negligence and ill preparedness. Accidents do happen...slips and falls on lichen result in broken bones. But if you call for rescue because you got caught above treeline in summer clothing and now are cold..yep a fine.

yellowcanoe said:
There are no fees for NH if your accident was not due to negligence and ill preparedness. Accidents do happen...slips and falls on lichen result in broken bones. But if you call for rescue because you got caught above treeline in summer clothing and now are cold..yep a fine.
Click to expand...

Which I don't thing GEOS membership would cover.

I was referring to the NH Fish and Game Hike Safe Card. It definitely covers bona fide necessary rescues. Maybe they're covered without the card.

Recall the strange case of Carl Skalak who was canoeing in the Adirondacks and got caught in a not too unusual late November snowstorm. The snow was heavy, and although within walking distance of self-extraction, he pressed the SOS button on his SPOT device for the first such rescue in the lower 48. I've been to the exact location and know it is a not too distant walk out to your vehicle once you leave the swampy area he was camped in and head into the highland wooded area. GEOS was alerted with the SOS and a helicopter from the nearby army base at Fort Drum responded to save his butt. However, he had to leave his canoe and gear behind. So three weeks later he returned to the site and again, on foot when bad weather again struck, and lacking sufficient gear and food for another stay, he pressed SOS again and was promptly rescued for a second time. This made national news. The DEC and army was not impressed and he was promptly arrested, charged, and later paid an undisclosed fine after a court appearance.

I'm considering getting a McMurdo. I sometimes hike alone and may backpack alone in the near future.

Although SPOT devices are required during the Yukon River races, a $500 rescue extraction deposit is required, subject to refund if not used. I know this has been used at least once during a race event I was on without use of a SPOT SOS signal. It was requested by a tandem kayak team during and at a common planned rest stop by the pair of ladies who had had enough and wanted to go home when at 300 miles into the 440 mile race. Extraction was performed in that case, including kayak recovery, via power boat.

Normally during the Yukon River races (440 mile and 1000 mile events), SPOT devices are set to automatically send your geo location every 10 minutes. The "I am OK" button may be pressed at any time for a status check. The "send help, no emergency" button may be pressed if needed, but accoding to the race protocol, it is up to an agreement with your pit crew to understand that no real emergency is in progress, but we are not continuing to reace, and to respond to the next available take-out location First Nation village if we are still seen to be moving downstream. Of couse if there is a true emergency, the SOS button could be pressed at any time for a GEOS rescue. Those races are now under a different director and management team, so I believe the rules of team communication may have changed.

These days, we carry an InReach. The ability to communicate exactly what the emergency is, is of great value to us. It may be as simple as "we need the nearest hunting lodge to send a boat, we have a broken leg/boat/ our food got carried off by a bear/fell off a cliff". The advent and value of two-way emergency communication is not to be overlooked. Previously, the only option was to Call The Cavalry. This might involve sending a chopper on board a Herc to the nearest airstrip - a rather expensive proposition - when a simple courtesy call from a local operator would have been sufficient.

We play it safe now. We deal with a local outfitter somehwere, who has a detailed trip plan, and who gets regular reports of our location. We're quite happy to pay someone for that service. We don't simply leave a trip plan with our significant others or the local authorities, we leave them with someone who knows exactly what to do, where to go, and what resources to muster if the s#*t hits the fan.

Two years ago we were 5 days or so behind schedule at the end of a trip. We weren't worried about the folks back home, because we were in regular communication with a local outfitter who knew we were doing just fine. We did, however, call for an evac - it was a $1500 turbo otter flight. Had we not had that communication in place, it would have been quite likely that folks back home would have become worried and called "The Cavalry".

The long and short is, we now have a prearragned evac plan, and its usefulness has manifested itself in more ways than one.
You must log in or register to reply here.

My Review of the Zoleo 2-way Satellite Messenger
2