No, I don't mean the folks you've taken your trips with. I mean strangers you've met along the way who are memorable for some reason, such as being just interesting, helpful, entertaining, needing your help, annoying or even obnoxious. They could be other paddlers, hikers, rangers, fishermen . . . whoever.

I'll just mention some folks I encountered on a six day trip in the Adirondacks a few years back, which included the famous 1.1 mile carry around Raquette Falls. This carry was the much anticipated Jeckyll-Hyde "highlight" of the trip for me because, given my age (69), not-so-great physical condition, and the almost 90° heat, I would have to triple carry. This carry starts with what has been likened to a climb up football stadium steps; its total rise being 187' and decline being 191'—5.5 miles for a triple carry.

So, to avoid a full triple, I decided to try to canoe cart most the carry even though some sources claimed it not to be wheelable. My collapsible canoe cart fit nicely in the deep bow of my Hemlock SRT as I began my trip at Blue Mountain Lake. 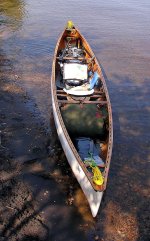 Around noon of the fifth day I entered the mouth of the Raquette River at the north end of Long Lake. 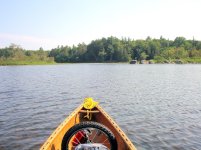 A few miles down is the junction of the Raquette and Cold Rivers, the latter having been called "the wildest and most remote river in [New York] state" (Jamieson & Morris, p. 76). 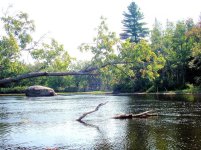 After exploring the Cold River and returning to the Raquette, I passed two massive guys in an aluminum tub engaged in "fishing", which is just a universal euphemism for drinking lots of beer. Being a non-fishing teetotaler, I regarded these louts with some disdain.

Forthwith, one comes upon a subtle hint that Mr. Hyde has arrived . . . Raquette Falls! 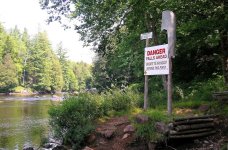 Dreading my triple carry up the football stadium to be followed by a possibly impossible wheeling experiment, I was further embarrassed by two guys and two gals, training for the 90 miler, who hoisted their GRB-Newman racing boats on their shoulders and sprinted up the hill.

"I coulda done that 40 years ago, you show offs!", I shouted in the caverns of my mind.

I was tired and hot, having paddled for nine hours since 6 am. The mid-afternoon sun was pushing 90°, and I plopped down amongst my boat and gear at the foot of the hill.

"Hello, sir, could we help you carry some of that stuff," said a voice from the water.

It was the aluminized, beer-swilling louts . . . now transformed into helpful gentlemen of the highest order of chivalry. Struggling with my ancient pride and self-reliance, I finally gave in and said, "yes". So, those two Samaritans carried my canoe up to the first part of carry trail that seemed arguably wheelable. 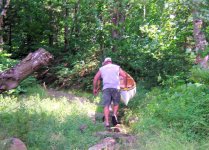 I only had to double carry to that point, at which time I loaded the canoe with all my gear in an attempt to wheel that unknown-to-me mountain goat trail. 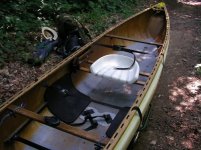 I dumped most of my drinking water to save weight. I muscled and struggled and tugged and pushed and hauled and finessed my loaded gear on a canoe cart for about a mile. Over rocks, around rocks, around corners, up hills and down hills. Frequently, my 100 pounds of wheeled canoe and gear got very stuck in washed-out ditches that would have been easy to step over with a canoe on shoulders or for a tandem team of wheelers. 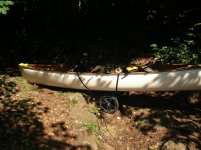 So I yanked and pulled and pushed and tugged. And sweated and sweated.

My heart was pounding against my chest so hard and so fast I knew -- just knew -- I was going to die. But I sort of accepted it. Die while canoeing. I'd thought about that for decades, and decided it would be my preferred way. Just to go out in my canoe . . . alone . . . and die. Leave no trace.

But I didn't die.

I completed the portage, out of water and out of energy.

The resident ranger at the base of Raquette Falls came over to me and expressed concern over my physical condition. He said I Iooked heat stressed and possibly dehydrated. He asked if I had water, and I told him no, I had dumped out all my reserves and would have to gravity filter some more. He told me to just sit in the pool at the base of the falls and cool off while he fetched something for me.

He came back with two cold bottles of apple juice, an apple, and a half gallon of fresh water. He gave me some packets of Gatorade to mix in the water for energy and electrolyte balance. And then asked if I needed any help reloading my canoe.

I probably looked worse than I really was, but this guy was a saint. I got the feeling he was equally solicitous to everyone who struggled out of that portage.

Evening was closing in, so he advised me where all the campsites and lean-to's were downstream. But every one of them was full and I was paddling like a bat out of hell to try to make the next one, and the next one, and it was getting dark, and . . . . Finally, I gave up and set up my tent on a small clearing next to the river that was not an approved campsite. This is against park rules, as you have to be 50 yards (or something) back from the water to wilderness camp. But I was too exhausted to bushwack into the forest.

The next morning a dangerous thunderstorm with high winds was predicted. Down river comes the same ranger in a motor boat, warning campers of the oncoming danger. He sees me breaking camp by the riverside. He says, "I didn't realize yesterday that all the campsites would be filled, and I bet you were in no shape to hike into the woods." I say, "You got that right." He says, "That was a smart and safe decision," and gives me a friendly good-bye salute.

I blasted through the storm that morning . . . 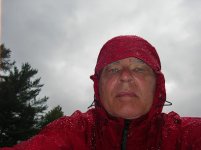 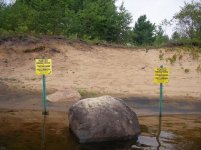 . . . and made it to the takeout under an Edgar Allan Poe sky. 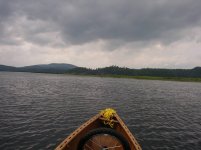 I'll never forget those fit young racers, the two beer-fishers-cum-gentlemen, and that most helpful park ranger.

I rarely see anyone close enough to talk to, but if I too met a red headed ranger named Gary at the base of the Raquette Falls. I was with a couple inexperienced friends and my Dad, and it was pouring rain (probably beginning of October) and after a few minutes of talking, Ranger Gary left momentarily and came back with a large bundle of dry wood “slats” to help get the nights fire started.

on another trip Ranger Gary approached my lean to camp and asked if he could repair the fire ring. He brought up a bucket of water and cement and rebuilt it while we talked about his love of wood working and strip boat building….and the bear that raided that very campsite the night before without disturbing any of four coolers the group had left around the fire.

I had a very memorable experience with two different ladies on Long Pond...

I paddled in to Long Pond solo on a midweek day, the goal was to have some alone time and secure a nice site for my buddy and his wife that would be coming the next day, and another buddy of mine with his current girlfriend.
As I poked around the shores, scouting for a site large enough for 6 of us, a lady's voice called out "hey, nice boat", I was paddling my stripped DY Special. She was reading a book, camped out on a prominent site along the main paddling route. I thanked her for the compliment and continued on.
About halfway up the pond I secured a nice spot, set up my tent, made lunch, yada, yada, yada. As the day grew longer, I went out for an evening paddle, to enjoy the sheet of glass water and the changing colors. As I'm dipping along, I hear another lady's voice calling out to me, sounding very nervous, asking "where is the carry and parking lot". She was solo in a Hornbeck, with but a daypack and a days worth of snackbag residue.
She was near panic, and explained to me that she had been quite proud of herself, loading her boat by herself, driving to the put in, making the carry and then paddling all of Long Pond and even carrying to Turtle and Slang. But, she explained through tears, that she attempted to return to her put in and nothing looked familiar along the carry...there was even another pond that she never saw on the way in. She had only a brochure from the outfitter as a guide.
So, I try to calm her, and ask a series of questions so that I can understand where she started from. After just a few questions it's clear to me that she started at the far end parking area, same as I did, and made the short .3 mile carry. It's also clear that she made the wrong carry on her attempted return to her car...she took the longer, beaver flooded carry from midway along Long Pond that leads to St Regis Canoe Outfitters, with a beaver pond in the middle.
She's still quite nervous and unsure, even after I show her my map. So I show her some images on my camera, with photos of the parking lot, asking her which car is hers. "Oh my God, that's my Subaru" she squealed. Ahh, I can see her body relax. Feeling pretty good about helping someone in distress, I offer to accompany her to the correct carry. So we paddle along, with her Hornbeck making all sorts of gurgles from a dragging painter in the bow. She thanks me profusely.
We part company near the carry, and I paddle not far from that solo lady's site, the one I spoke with on the way in. She starts yelling at me, because....wait for it....because my conversation with the lost soul was disturbing her "wilderness experience". OK, everyone has their pet peeves, I suppose. I explain the situation of the panic stricken, lost lady, to deaf ears. HER wilderness experience has been degraded because of ME.
OK, I've had enough of her sh!t at this point, and make it very clear that she was now disturbing MY "wilderness experience". Furthermore, I tell her if she wants an undisturbed experience, she should not camp in such a prominent site, and if she truly wanted a wilderness experience, she should not expect it on such popular water on a holiday weekend.
The next day, the rest of my group arrives, makes camp, has lunch, yada, yada. We decide to paddle to Pink and Ledge ponds. 6 of us, in 4 canoes head that way, carrying on casual conversations between boats. Of course, I've already told my friends about the "wilderness experience" lady.
And guess what? Here comes Ms. wilderness again, rushing to the shoreline to admonish us for ruining (here it comes again) HER wilderness experience. I'll just say that my fellow campers were not nearly as tactful as I was, they promptly told her where she should place her opinions.

So there it is, two ladies that left a lasting impression, for vastly different reasons.
You must log in or register to reply here.

Fears while paddling or on canoe trips
2