I've read this write up before Chip and am glad you posted it again! Really brought a grin on!

PORTAGE AT NORTHEAST CARRY. We pulled on our hiking boots and walked the half-mile to Raymond’s Store. Having both called Raymond’s and written them a letter to say we were coming, it was disappointing to hear the proprietor’s curt reply when I asked if we could hire a shuttle: “nope, not today.” What about tomorrow? “Not shuah.” We asked if he thought we could contact a local that might want to earn some cash by helping us out. “Thahs nobody else heah.”

Raymond’s is a small store, maybe 20’x30’, with a formica table for six in the center. I bought some coffee and sat down to ponder. Our boats were heavily loaded. It’d probably take us three trips to carry it all; six miles hauling gear and twelve miles of walking. That’d make an unpleasant day. We considered setting up camp, though it isn’t a designated camp site.

A half hour after entering Raymond’s, we were still pondering options when two customers drove up in an F-250 with a couple rec boats in the bed (these were the only customers who happened by while we were there). We explained our situation to these two Bay-staters and they quickly agreed to ferry us across the Carry. These guys, Wayne and Steve, earned a place in my heart. They dumped out their kayaks and carried us back to the Lake. We were barely able to lift our loaded boats into the pickup. The cockpit of the Azul sat squarely on the tailgate, and I climbed into the bed and sat on the bow to keep it from rocking out. I was a little scared the boat would snap in half as we jounced the mile-and-a-half to the Seboomic Road. From hiking here in 2004, I knew the last half mile of the Carry, down to Penobscot Farms, was much rougher, but I was unprepared for how rough the road had become in the four years since then. There were huge, axle-deep ruts and puddles. Steve’s driving was magnificently gentle, yet my boat still bounced severely in the bed. We came to a severe wash out, and I thought that this was the end of the ride. Steve and Wayne got out and walked the gulley that sliced through the road. Steve decided he could do it and I felt the truck go into low-range 4wd. I was stunned he was able to get through the wash-out as gently as he did, and after that, it was only a few more ruts and small ponds to drive through to get to the River.

At Penobscot Farm we encountered the single most viscous swarm of mosquitoes I ever experienced. Wayne helped me carry my boat to the river, ignoring mosquitoes that landed on his bare legs and arms covering him like body hair. “What else can you do?” he asked. None of us tarried in that environment. We thanked Wayne and Steve profusely and quickly and watched for a moment as the truck disappeared toward the Seboomic Road.

I ripped open a hatch and grabbed my fleece pants, somehow pulling them on over my hiking boots, covering my bare legs. Driven to distraction by the swarm, I leapt into the cockpit, shoved in a few items I was carrying, including my spray skirt, and shoved off. Size twelve hiking boots don’t fit in the cockpit of my kayak. My legs were crossed and toes shoved down beyond the footpegs and I had so much other stuff shoved into the cockpit that I was really crammed in. But on the Penobscot, while the mosquito population was still strong, we paddled away from the swarm and….

Paddlinhal said:
It was more than 20 years ago when me and DougD were portaging through Portage Maine,
Click to expand...

The photo of the Portage ME Post Office brought a big smile to my face! My Dad, brother, a few friends and I deer hunted North Maine Woods land through the Fish River Checkpoint from a rented camp on Portage Lake from 1985-2008. One year my Dad hit an 8 point buck with his truck on the way into town. Jim Fahey gave him the deer, which we processed at camp. We ate well and cheaply that year! John Robertson was a well known and highly regarded trapper. I still use a "Robertson set" for under ice beaver trapping. One year a friend with us shot his buck early in the hunt and was looking for something to do. He asked the folks next door if he could borrow their kayak, which he'd noticed stored outside behind a shed. They kindly consented and the next day I dropped him off on Hewes Brook Road where the Fish River crosses. He floated down the Fish into Portage Lake and paddled across the lake back to camp.

I love Northern Maine. The working landscape with generous public access is incredible. We've met so many wonderful people there who have been unfailingly kind, generous and helpful.
L 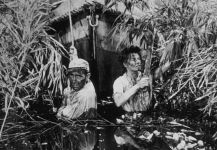 Met this couple on a "paddle" down the Horse river to Basswood river.
Larry S

LarrySw45 said:
View attachment 129643
Met this couple on a "paddle" down the Horse river to Basswood river.
Larry S
Click to expand...

Your memory may have bogeyed this hole. You probably shot this photo on the Ulanga River, hopefully avoiding the leeches.

Glenn MacGrady said:
Your memory may have bogeyed this hole. You probably shot this photo on the Ulanga River, hopefully avoiding the leeches.
Click to expand...

I’m a little surprised that you didn’t put ”bogeyed” in quotes.

I made an overnight trip on part of the Whanganui River in New Zealand. Arriving at the Poukaria camp site, I encountered around a fire a group of perhaps a dozen rough-looking young people. Extreme hair styles, body piercings, lots of tattoos, lots of leather (no nylon) and rough sounding Kiwi accents was what made them rough looking to me. Of course, it's wrong to judge a book by the cover, but these folks were certainly not the type you normally meet in a backcountry camp. The next day, the group and I hopscotched each other as we paddled downriver.

I stopped to admire the scenery at the confluence of the Ohura River. The rough lot pulled their canoes in soon after. This was when I met the group's trip leaders, Ray and Mike. Ray was in his fifties, and he told me he works for the New Zealand government, and was guiding this group of "hardcore unemployed" on a five-day river trip. He allowed that he was lucky to be getting paid for doing what he loves. A minister by the name of Mike was the other guide, and there were a couple European women along, decidedly not rough looking, who were on some sort of internship.

Meeting Ray was a stroke of luck for me. He explained much history at the confluence of the Ohura, where there was a Maori totem pole carved from Tatora wood, unique to New Zealand, that is extremely rot resistant. My lessons continued as we paddled together below the Ohura, along with stories of groups Mike previously guided on the river. He told me about Maori traditions and legends, the history of steamboat travel on the Whanganui, local paddling groups and how the river conditions changed with various water levels.

The Government of New Zealand was paying Ray to guide this group down the river. The "kids" were troubled, unemployed youths who applied and were selected to go on this trip. The goals of the trip were to expose the kids to the wealth of New Zealand's natural attractions, teach self-reliance, teach team work and boost their confidence. Ray was perhaps biased, but told me, "it works."

Ray and Mike were two gregarious guys going about their business of trying to make life better for the trip participants. I think they appreciated me as an attentive audience eager to absorb the knowledge they shared. I wasn't happy to be sharing the river with the rough lot, but in the end, I really appreciated what the two leaders had to share, and meeting this group became a highlight of an already great trip.

My Trillium has had the added benefit of improving my social life; it's blacklite with wood trim and I took off all the (obnoxious to me) decals). I always get compliments on it. One was from a vey nice lady at the put-in, with a blacklite Northwind. A few pleasant dates resulted. Guess that's the best I got so far.
You must log in or register to reply here.

Furthest you have carried to launch a canoe?
2

Worst medical situation you've had on a canoe trip
2