Saw many woodland bison, with a large bull taking his place with his female harem on the road (his road) on the way to Whitehorse. A couple of friendly goats at a rest area greeted us during a brief stop. Lost count at 40+ Dall sheep single file traversing a distant hillside.

While attempting to find relatives in a remote part of Poland a couple of years ago, I hiked a muddy dirt road on a false lead to find a relative's home. Took a photo of a recent k9 track of some kind in the mud next to my size 12 boot. Later, after having found a family member, practically the only English I ever heard him say when I showed him the photo, was "Big Wolf".
y y 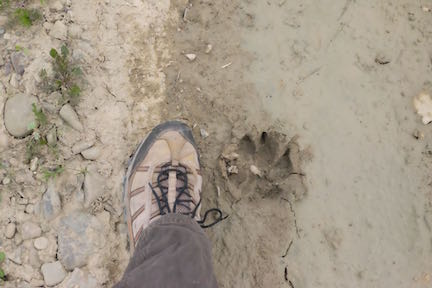 Went off topic and stayed off topic.

I s‘pose I’m in the minority, but I enjoy the good stuff that comes with thread drift. It can be hard to find again later though.

One of the reasons I like this site is that the threads drift & (usually) drift back. More of a "campfire, no real hurry" feel IMO...

To the original question: I hang bear bags. Yep, I'm well aware that bears climb but I'm a creature of habit and will hang wherever suitable trees are found (and no apologies for my stubbornness). All food, trash, toothpaste, etc is in the pinata so the critter(s) will be amply rewarded if he/they can figure out how to get it.

I have started using odor-proof zip-lock bags (inside the hanging grub sack) and I've tested them in the backyard (cats & bacon... really scientific!) as well as while in a burn area of the BWCA about a year ago. All remained unmolested but I can't really see the harm in tossing a shot bag over a limb & making the critters work a little...

Serious question- cause I really don’t know… has anyone moored their food in the lake or river?

Woodpuppy said:
Serious question- cause I really don’t know… has anyone moored their food in the lake or river?
Click to expand...

On a raft of some sort? Remember, bears swim almost as well as they can climb.

I've thought about sinking the food with weights in some sort of waterproof container near shore, but have never actually done it.

alsg said:
On a raft of some sort? Remember, bears swim almost as well as they can climb.
Click to expand...

Glenn MacGrady said:
I've thought about sinking the food with weights in some sort of waterproof container near shore, but have never actually done it.
Click to expand...

Either way- anchored and buoyant, or submerged. I suppose it still wouldn’t protect the other packs from tasting.

That question has been asked before, some time ago. I don't remember if it was on this or some other forum. After considerable discussion, when you do the calculation of how much weight would be needed to submerge a container of food and air, it seemed impractical.
As Alsg mentioned, bears are good swimmers. A few years ago at Lows Lake in the Adirondacks, there was a bear who was known to make nightly rounds by swimming half a mile from island to island to mainland, visiting numerous commonly used campsites along the way. He would then return to his starting point by land (there is a dirt road inland not quite long the shore). I know campers who lost some of their food when they forgot to pack up all of it after dinner and neglected to protect it all.

What is your preferred method for protecting food from the elements, insects and animals while remote camping?
Click to expand...

Ok, so back to the original question. In all honesty, my preferred method is a non-lethal aggressive stance to anything that is trying to take my food or is unwelcome in camp. My lesson in this started early in life. I was about 6 and my dad and I were camping in northern Manitoba at a well used fishing site. A bear came by in the evening, and my dad and his chums threw everything they could find at it, even D sized batteries. This was accompanied by a tirade of insults designed to really do some emotional damage to the bear. The bear left, he couldn't put a tail between his legs, but he was certainly shame faced.

Since then, my fear of bears has been fairly minimal, and I have had many, many encounters. My son and I have chased them out of our yard with axes, I have broken a bicycle pump across the snout of one, busted cans of diet coke on their heads, and yes, even thrown a cat at them. In all cases so far, I have been the victor.

Now let us take this attitude to parks, and areas that are frequented by dirty humanoids and opportunistic ursines. If in the beginning, the aforementioned garbage strewing people had kept a clean camp and used strong persuasion against the marauding bears, the bears, being fairly astute in the ways of plunder, would have passed the word down the grunt chain that the area was undesirable.

However, when people see a bear and shriek in terror and abandon all hope, retreating in their gotchies to their canoes and paddling like all heck to "safety", the bears become thug-ish in their attitudes, and realize that the bald bipeds are easy pickins. So the old grunt chain of bear info gets passed down through generations, saying "this spot good, if no food on ground, climb tree".

It's pretty hard to recapture these bear buffets once they take over. However, if you are "remote" camping, the bears should still be impressionable, so treat them rough and make them know that despite our puniness, humans are not walking lunch buckets, but bad to the bone predators. Future canoeists will thank you for being bad-assed.

I just read your excellent screed on the other site. Based on that, I’m a little surprised that you didn’t post an image or two to support your posting here.

I just read your excellent screed on the other site. Based on that, I’m a little surprised that you didn’t post an image or two to support your posting here.
Click to expand...

What is the other site?

Woodpuppy said:
What is the other site?
Click to expand...

It’s myccr. Very difficult, to the point of not worth it, to post images there. Our site, canoetripping.net, in my opinion, is vastly, overwhelmingly and unquestionably much superior. At one time, myccr was the standard bearer, at least for Canadian trippers.,

“I haven't had a bear bother my grub in the last 50 years. We always pee around our camp to provide a human scent fence which works, usually”

Another reason to pack sufficient beer.

Mike McCrea said:
“I haven't had a bear bother my grub in the last 50 years. We always pee around our camp to provide a human scent fence which works, usually”

Another reason to pack sufficient beer.
Click to expand...

On the plus side needing to take a leak at 4:30/5:00am means I get to see sunrise every morning.
You must log in or register to reply here.

G
Quick foods for recovery when running on empty?
2

How do you store your food waste trash at campsites?
2