Books that made a profound impact

Are there any books that profoundly affected your canoe tripping lifestyle or outdoor world in general?

I am rereading a book that I originally read in high school and many times since. It planted a seed that at the time I was unaware of. After college I moved to Chicago to begin my career and as much as I enjoyed living there in my early 20’s was always looking for a reason to go north to camp and fish. After a few years I was on a business trip to CT and took a couple extra days to fish a river I had read about in a fly fishing magazine. I had never fly fished, but after a couple days of flailing the water and accidentally hooking a good sized rainbow trout I was hooked. A month later I bought a tiny lake cottage returning to the earth in NW CT and spent untold hours on the water fishing and canoeing. 20 some years later a lot and little has changed. 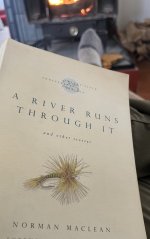 Song of the Paddle as well as the other Mason books, but without a doubt, Song of the Paddle. Its definitely the rattiest looking book on the shelf.
For fiction, Lost in the Barrens and The Curse of the Viking Grave were very inspiring, and still are.

I don’t know if any had a profound impact. A tripping book that influenced me was Davidson & Rugge’s The Complete Wilderness Paddler. I had done some trips and canoe campers before 1976, and that year was on my first long coast-to-coast cross country trip, with that along as part of our shared library.

I loved the self-deprecating style in which they described their trip, from preparation to self-shuttle to “For the good of the trip” success.

Some of Colin Fletcher’s stuff too; The Man Who Walked Through Time (1967), I was a backpacker before I was much of a tripper.

Add some Edward Abbey. Desert Solitaire (1968) or other of his non-fiction. Another writer who knew how to use self-deprecation. His short story of burning out a beautiful canyon before the Glen Canyon Dam drowned it – by setting fire to his toilet paper – comes to mind.

Thinking about those three first-to-mind books I suppose that their influence and impact was the timing and my coming of wilderness travel age. None the less I could re-read any of them, and have.

Also pondering those books I have a harder time with some outdoors writers who recommendations and way is always the best and only way. Until their next book. 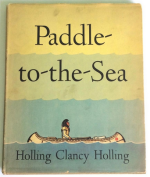 All of Robert Service, Sigurd Olsen and Calvin Rutstrum. Calvin’s Paradise Below Zero got me excited to live in a wall tent (with stove) for a year and a half in northern Idaho.
Jim

Davidson and Rugge. It was my bible for years and the go-to for my most adventurous trips.

When I was a boy, bored in school … I would dreamily stare out the large windows of my elementary classroom and drift off to the Catskills, living my version of the book, “ My side of the mountain “, by Jean Craighead George. I always had a deep love for the outdoors and this book spoke to me as youngster … and had me searching intensely for a tree to live in and a pet falcon … in rural Indiana!

All these decades later, I still remember this book so fondly but have given upon on owning a falcon. Instead, I now roam the timber with my dogs.

Bob, I expect that I read My Side of the Mountain a dozen times of more as a pre-teen. So yeah, that book did have a profound effect on my young life.
P

We belong to the same fraternity of paddlers.
In college John Muir, Ralph Waldo Emerson and HD Thoreau started me on the path to becoming a forester.
Then is was Robert Marshall, Robert Service, Townsend Whelen, Calvin Rutstrom, Nessmonk, Bradford Angier, Horace Kephart, Sig Olsen, Verlen Kruger and many others.

Then I got serious about Bill Mason and Cliff Jacobsen. It was CJs book "Canoeing Wild Rivers" that gave me the confidence to lead some more serious river trips of 75 miles or more.

I read a lot of western history and books about the Alaska/Canadian bush. I have a stack of new ones next to the bed that my girl gives me every year for Christmas. I do not read much fiction, it is just too confusing.

Song of The Paddle for me too, I learned a lot about canoe tripping from this book, and it help steer me towards Chestnut canoes, canvas packs, and more old-style canoe camping.

Song of the Paddle for me too. For lack of better words it changed my attitude about canoes from them being a "beast of burden" to the "family pet."

Location
In the mountains North of Montreal.

I read this book some 75 years ago when I was 7 or 8 years old. It confirmed my desire to be in the woods whenever possible. 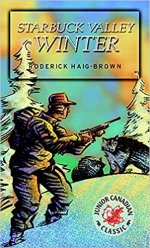 On the canoeing front:
Canoeing with the Cree, One Incredible Journey, The Complete Wilderness Paddler, Canoe Atlas of the Little North, Canoeing North Into the Unknown, Cold Summer Wind.

Ann was a huge force in the small California canoe community and she probably started the rec kayak boom in the USA with her Kiwi Kayaks business. She also ran businesses under the names Dragonfly Designs and California Rivers. I still own a throw bag and float bags made by her, as well as one of the first Goretex paddling outfits ever made, though it no longer fits me.

As far as tripping books in my early career, I also enjoyed The Complete Wilderness Paddler and, a few years later having moved to New York State, I was pleasantly surprised to have John Berry show us rapids that Davidson and Rugge trained on in the Riparius to The Glen run on the Hudson River.

Another read that made an impression on me was John McPhee's The Survival of the Bark Canoe. I don't think many of our builders here incorporate wulegesesek (plural of wulegessis) on their bows and sterns as Henri Vaillancourt did.

If a welegesek is something like a bark piece that creates a deck at the stems, and maybe comes a bit down the sides, I use them, or often reuse them, on every rebuild.

In modern parlance deck plates or deck caps. I have a collection of old ones in case they fit future rebuilds. 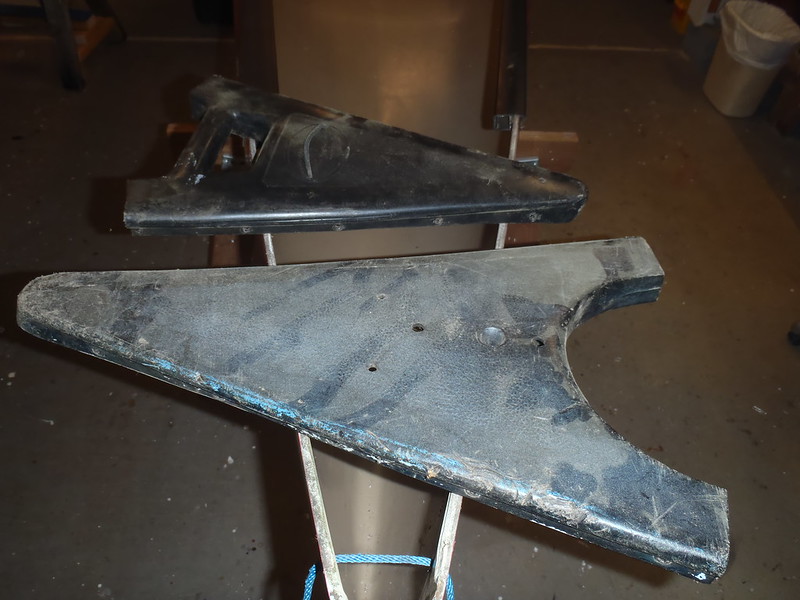 The mismatched deck plates on the Explorer re-rebuild were originally worn through, enough that I had to refashion the tips. I had thought those were old Mohawks, that being a familiar Mohawk color. 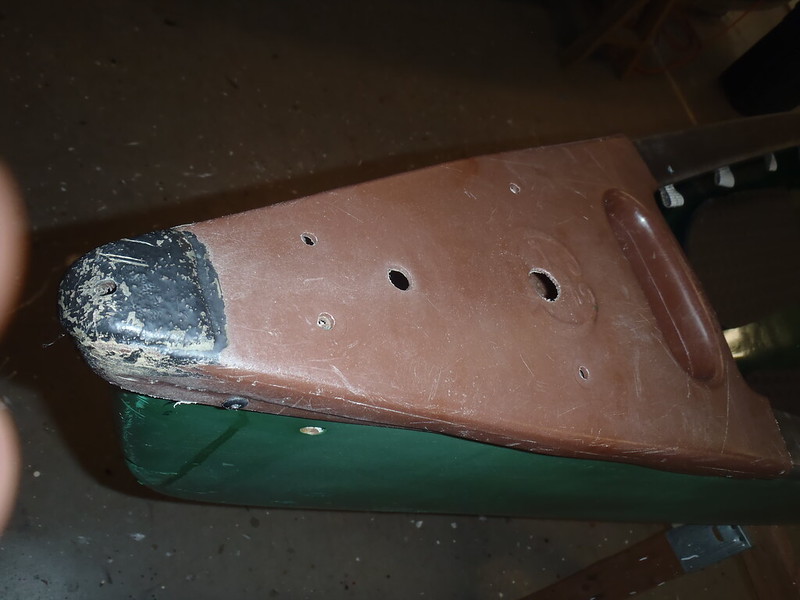 In an example of how unobservant I can be one of those big WTF? holes is drilled through an embossed rabbit smoking in the ferns.

If I can’t re-use them I’ll buy new ones if I have to have to. 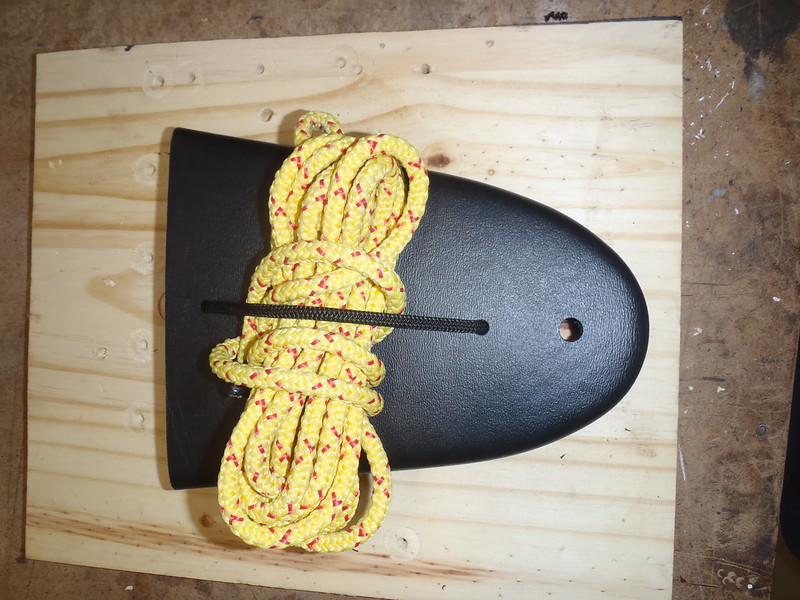 If a welegesek doesn’t have to have the side bits, many builders make beautiful deck plates, with inset woods and patterns. Or, if the side flaps are a requirement, DIY’ed Kydex.

I recognized that some folks prefer going deck less. With wood I guess it looks OK; still looks like something is missing to me. With vinyl gunwale it looks unfinished ugly and with aluminum gunwales potentially dangerous.

Or a welegesek is something else entirely, and I’m just having fun with Glenn.

Mike McCrea said:
Or, if the side flaps are a requirement, DIY’ed Kydex.
Click to expand...

A wulegessis is the flap extension of the deck folded under the outwale, overlapping the end of the hull.

A wulegessis made of Kydex? Uncas, Chingachgook, Natty Bumppo and Henry Vaillancourt would puke! Please read the book about the Abbe Museum in Bar Harbor, on Mt. Desert Island, Maine. There, you will see photos of wulegesesek made of proper materials as well as (your favorite) skid plates made of leather instead of Dynel.

Let's all get back more to pre-Dupont canoeing, and books made of paper instead of LCD. 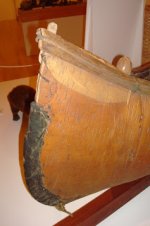 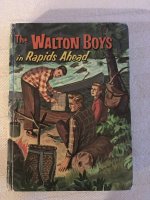 This is the book which started it all. Growing up in suburban Maryland in the 1950’s, I had never heard of canoes, rapids, canoe camping,black flies, or the north woods of Maine. This gift from my brother when I was 10 years old introduced all of these things and instilled a desire to experience some of them (sans black flies) myself. The flames were later stoked by Davidson& rugge, Bill Mason and others. I enjoy re-reading old issues for Canoe Magazine, Paddler, Canoe&Kayak and Canoesport Journal from my collection during the winter months.

I think I have most of Cal Rutstrum's books that I've read many times. As a very young canoeist, I met Cal and wife in Grand Marais, MN.

I have had the pleasure of meeting many of the local (some more distant) guidebook authors, as well as boat and paddle making luminaries. Back in the olden days, when canoe clubs were a force, winter meetings were off-water affairs; pot-lucks held in a high school cafeteria or rented rec room, with a scheduled guest speaker.

They say never meet your heroes. I disagree; I suggest arranging to meet them before their talk at a (locally notorious) Irish Pub, if possible with a select group of other cherry picked club members, well before their talk. Make it clear that you are picking up the tab, will be chauffeuring them to and fro, and remember the phrase “We’ll have another round of Guinness”.

Best Jim Snyder paddle-making talk ever. This was the days before video-tape, or he would today be Tik-Tok famous. Somewhere I have notes on what he said; Snyder had a Lewis Carroll/Jonathan Swift way of making up new words to describe directed and irregular laminar flow over paddle blades. Sadly I do not remember his terminology; I’d had a few Guinness myself, and a portion of his cafeteria audience was shit faced.

I really wanted one of the demo didn’t-work assortment of experimental paddles he brought to show; if only for a souvenir of his tipsy confessional “WTF was I thinking when I built this” design revelations.

Based on that meeting I like him a lot. He was, still is I believe, a master builder of wood whitewater paddles.

FWIW we tried to recreate that pub experience a few years later with another paddling club guest speaker. We had not considered that the winter meeting date was the day after St. Patrick’s Day. The pub was trashed, closed and still sweeping up broken glass, including the shattered front widow.

With a talk scheduled a day earlier that could have been a memorable evening.

Rubbaboo said:
Song of the Paddle as well as the other Mason books, but without a doubt, Song of the Paddle. Its definitely the rattiest looking book on the shelf.
For fiction, Lost in the Barrens and The Curse of the Viking Grave were very inspiring, and still are.
Click to expand...

over the years, I've worn out copies of all 3, as well as many other Mason and Mowat books. In fact, when I went north to work restoring logging sites for about 5 months, those three as well as Never Cry Wolf and the Dog Who Wouldn't Die were my evening entertainment as I lay in the tent every night as the woodstove slowly died...
You must log in or register to reply here.