What was the worst canoe you ever owned or paddled?

The worst I've ever owned was the first I ever bought in 1980 when I lived in San Jose, California. It was a plastic Pelican canoe that I had to assemble—metal inside keelson, foam sponsons, seats, other things. I also bought a motor mount and a 2hp Mercury outboard motor. After assembling the thing and somehow toting it to a local reservoir, I put the motor on the stern, plopped my then-trim self in the stern . . . and . . . the stern of the boat sank under the water. Paddling it was also a chore.

The marine store took back the canoe, sort of glad that I had put it together for them, and I kept the motor mount and motor. I then bought a Royalex Mad River Explorer, which was and still is a great all-around tandem and solo canoe.

One of the worst canoes I ever paddled was one of the first short whitewater canoes in the early 1980's, the Perception HD-1. It's the only canoe I've ever been in that seemed to have no primary or secondary stability, and which was most at home flipping itself upside-down. Not my photo, but here one is: 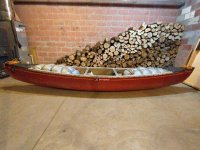 It's interesting you mention the HD-1. In the early 80's, Rob Lesser ("hair boater" (kayak) of Stikine, Rio Bio Bio, etc. etc. fame, and International Whitewater Hall of Famer, Rob bio) was the Perception rep for the shop I worked at. He brought an HD-1 out, and we were playing in a local creek. He pretty promptly went over, and I fished him out (ironically I was in a kayak) , chuckling to myself that I had pulled the best kayaker in the world out of the drink. He's a super nice guy, and I fortunately ran into him a couple more times over the years.

Wow, I had an HD-1 as my first open whitewater canoe. I paddled a bunch of rapids and swam a bunch of them too! I learned whitewater paddling in an old Hann designed C-1 (early 1970's vintage), but it didn't prepare me for this boat. Mine was black. No digital photos of it, film was still the format back then.
For flatwater, my first canoe, a poly Coleman 16', was the worst; heavy, flexed even with the metal pole running the length of the boat, and handled side winds like it had a sail attached.
Last edited: Jul 10, 2022

A plastic Coleman with an aluminum frame.

The “worst” canoe could be very subjective, as in “worst for X type of canoeing” but in my early canoeing the boat mattered little, I just loved doing it. Worst I’ve ever paddled would probably have to be an aluminum rental, but I didn’t know it at the time. Worst I’ve owned still wasn’t a terrible boat, just heavy - an OT Disco 164. Most involuntary swamps goes to a Kevlar Wenonah Prism, but we’re getting along less swimmingly now

Where were you living at that time? I'm curious because I always perceived the Hahn C-1 to be a very northeastern canoe. John Berry made them in Vermont and later the Adirondacks, and John Sweet made them in Pennsylvania. (BTW, you might consider adding your location to your profile so it shows up under your avatar.)

I came across a banged up Sportspal canoe hidden in the brush near a secluded Adirondack Lake a few years ago. I took it out for a spin, I would have to say that was the worst. The foam "seats" which were stowed into the bow&stern had bungee cords apparently used to keep them in place as you sat on them were comically useless.

Glenn MacGrady said:
Where were you living at that time? I'm curious because I always perceived the Hahn C-1 to be a very northeastern canoe. John Berry made them in Vermont and later the Adirondacks, and John Sweet made them in Pennsylvania. (BTW, you might consider adding your location to your profile so it shows up under your avatar.)
Click to expand...

I was living in western NC. The boat was, from what I was told, built on a mold by the Georgia Canoe Club.
Thanks for the Profile addition info, I thought that I had already done that; guess not though.

Haha, Russ, Sportspals we’re just as terrible as my first canoe.
Or should I say half of a canoe, I chipped in with my father for a Radisson (ugly twin of the sports pal). He loved it for fishing.
MDB and I called it “The Cork” for its poor handling in waves and the fact that it went as fast sideways as it did going forward!
To this day, when I see one, I silently mock them with an internal question— is that really birch bark?

I like all the canoes I've owned, the "worst" canoe I can remember paddling was a Grumman at summer camp when I was 12(?) prior to that I had only paddled the family Peterborough W/C or other rental W/C boats. It was probably the 17' version, killer portaging for two kids.

My former tripping partner (1999 - 2011) revealed to me the beauty of solo paddling and schooled me on the art of running rapids. For the first 6 years he paddled an HD1, he let me try it once on our first trip, I survived 30 seconds without falling out but never asked to try it again. I never saw Steve swim from that HD1 (nor any other boat) 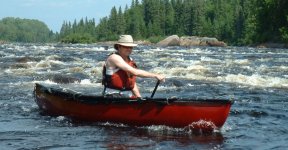 Now back on topic.....worst canoes....the one that drifted off in the night

A 'White' "Allagash"? Very shallow at the center that took on a lot of water. I sold it as soon as I got back and bought a new Spirit II

Sportspal for sure. Me and two of my teenage buddies wrapped it completely around a tree mid current. Then we banged it back into roughly a canoe shape and slathered roofing tar on every seam. It always leaked after that. My dad replaced it with a 13 foot springbok aluminum bathtub, which was lightyears better than the sportspal, but still a pig.

The faux birchbark monstrosity out on the dock below. I don't even know who made it. When my aunt was looking for a new boat for the lake I told her to look for an OT Guide or Disco, but she came up with this thing. Ugly, and paddles like a bathtub.

Probably our 15 foot Grumman.. That said it did ALOT of trips in Algonquin and even the Allagash where we learned about alu keels vs rocks in Chase Rapids. Bent the canoe and jumped on it to get some of the bend out. That said we did many more trips in that now hogged by us craft but the final straw was Pickerel Lake in Quetico in a 20 mph headwind.. Took 10 hours to go ten miles.. It had the shape of a bathtub. On our way home we stopped at Sawyer in Oxtongue Lake ( now Swift) and picked up a little bigger Sawyer 190. Saved just 7 lbs but was a little faster. Then the insanity started. We wanted to do a long trip and the Sawyer was too little. In 1991 we went to Yawgoo Valley Ski Area in Rhode Island and picked up a Wenonah Odyssey. ( yes there was a paddle shop there). Went to Wabakimi, missed a portage on day 2and bent the gunwales in a short sharp rapid hitting a rock head on.. And tore out a thwart. And finished 14 days anyway.

The boat least to my liking ( it wasn't mine but someone let me try it) A Souris River Tranquility Solo. Worst canoe for me. Not worst for everyone; it has its fans.

IIRC my first solo was a Wenonah Solitude which of course I loved at the time…”first love”and all that. But as skills improved I found it uninspiring in both performance and aesthetics. Stiiilll…have fond memories of paddles with friends at that time as we were all discovering the joy of solo.
Not really a “bad” boat, just think looking back it was my least favorite.

Old Town Pack canoe. I’m 250lbs, trip with a dog. Add gear on top of that and this boat sucks.

when I first starting teaching kids I used the pond and creek at a local scout camp for their first "open water" lessons, they had a motley mix of badly abused Colemans and Pelicans with bent keel stiffeners, caved in gunnels, missing caps, and busted seats, not one would paddle in a straight line and most leaked. they were the absolute worst at anything faster than a crawl, and quickly led me to getting a 1/2 dozen Swift Kippawas in expedition kevlar for training...

I've been lucky enough to own some nice boats so I'll have to choose the first canoe I bought, an Old Town Discovery 158. It's not a bad canoe and it took me on many adventures but that thing was a beast! Of course it was far better than any of the canoe livery aluminum beaters that I happened to find myself in.
Last edited: Jul 12, 2022

I don't think that was the boats fault! Wee bit overloaded the best boat in the world can be like paddling a log! I have overloaded my RapidFire and had the same feeling but having paddled it with a reasonable load I knew it wasn't the boat. Hope you had a good time anyway! I know in my worst canoe I still did..except when I got sunburned from the reflective metal.
You must log in or register to reply here.

The first canoe you ever PADDLED and the circumstances
2 3

What was the first river you ever paddled?
2 3