Spent some time this winter putting together a wanigan, especially after seeing's OM's gorgeous camping boxes in this post here.

The intention wasn't to build a heavy duty box for rough use, but make something functional for light duty tripping and some of upriver poling trips. Plus there was a growing pile of wood scraps and leather supplies accumulating in the house (don't have a garage or workshop ) so thought this would be great winter project to use up some stuff. Sort of followed the construction methods of "Temagami" style wanigans I've seen. The bottom and short sides were leftover scraps of 1x12 pine used for shelving. The long sides are 1/4" birch ply that were originally cut to be panels for woodburning art. The lid is from a piece of scrap 1/2" poplar plywood with 1x2 pine for the handles and feet. Ended up re-using a store bought birch-ply gallery panel (basically a 1/4" birch board with a 2" frame) as a tray. It fit nicely on some rails made from square dowels. Also ended up using some brass box latches that were originally intended for a humidor project that never materialized. Wanted to emulate the style of wonderful illustrator Les Kouba so the lid is decorated with a modified camp scence from Rutstrum's North American Canoe Country 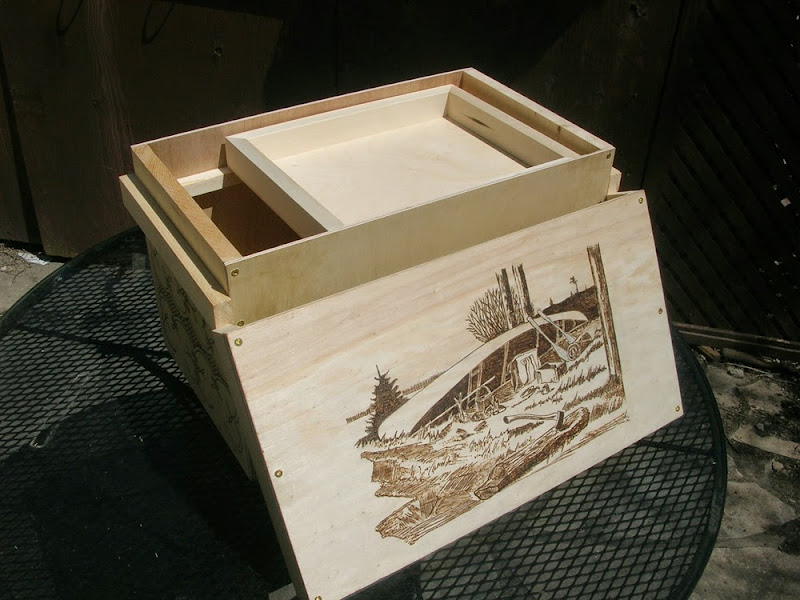 Here it is all varnished up and rigged with a leather tumpline: 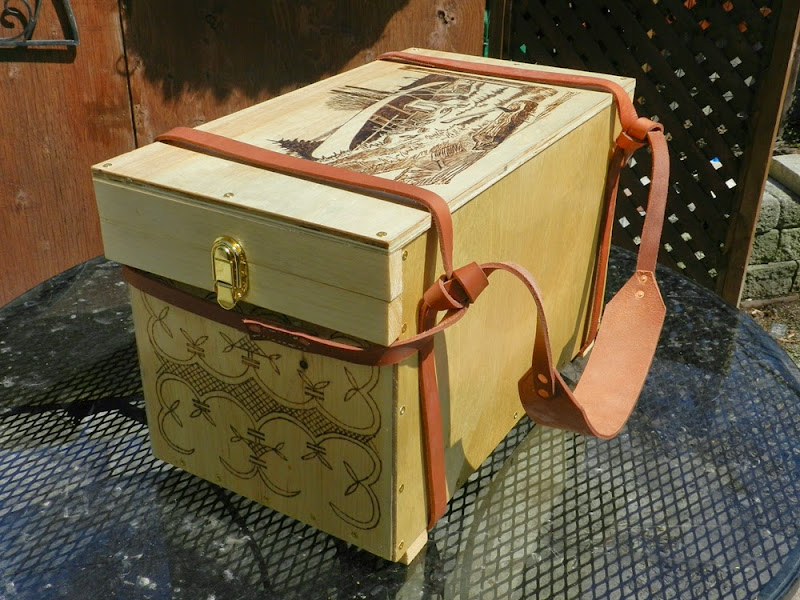 Realize wanigans aren't the most popular bit of gear out there, but I like how they transport bulky kitchen stuff. Plus having a level surface is a nice feature in camp.

If anyone else wants to build one, here are some links online. Each has a slightly different construction method

Thanks OM for the original inspiration!
Last edited: May 4, 2014
G

What a nice piece of work - and a work of art, to boot!

Wanigans are part of my tripping life too. Always have been. The important thing from my perspective is to use a design that enables you to paddle all day in the rain without taking on water inside the wanigans through the lids. I've been thinking about such designs a lot lately because I have to build some new wanigans sometime soon.

If you look at the first lid in that Northwest Woodsman tutorial the thing that I don't understand is how the long sides - they look like 1/4 inch plywood - are joined to the top itself - also 1/4 inch ply. But I like the look of that top design as far as keeping rain water out. Also light weight but strong enough to sit on.

Holy smokers! Now THAT'S a wanigan! What beautiful work, where did you come up with the illustration for the lid? I really like the idea of a removable tray; it's such a great way to keep track of small items that would get lost down in the bottom otherwise.

I'll bet before everyone got all mass productioned, the way we are now, humans probably spent the long winter's confinement building and decorating items for everyday use. There surely is a quiet pride in being able to say "I made that".
No question, this 21th century is a pretty big noise, but I think it leaves many people still hungering for something that feeds their soul. Like your project here Murat.
Thanks for sharing with us!

I like that, very nicely done. Just to have a neat box like that to store some gear in would look great in many spots in my house. Better yet, a great Christmas gift for a young sportsman to keep his/or her future fishing, hunting and camping gear.
Now how do you get that picture on the lid or the designs on the side. Is there a tutorial somewhere?
Thanks for the links, just about all you need to know to build one.
Thanks

Nice work. I built a couple a long time ago, and thanks to your work here I will never share them, but found them to be too heavy and cumbersome for my liking. Besides looking infinitely better than the ones I built, yours also appear to be lighter.

I considered building new ones using different techniques and wood choices but decided I am happy with my packs. The ones I did build are used for car camping, boating shore lunch kit or ice fishing trips and get loaded up with the heavy gear.

Again, incredibly nice work. I am envious of your patience and skills to create such beautiful pieces.

Very nice! What are the dimensions on that piece? I would be afraid to cook or sit on it. I wouldn't want to ruin that nice camp scene!

Thanks guys. The artwork is a fun part of the process too & figure it'll give me something to stare at during the off-season.

Because I had precut the ply sides into 12" x 20" panels for another project, the overall size is smaller than typical wanigan plans I've seen. This one is roughly 12 x 12 x 20. Plenty big for solo needs. They can get quite cumbersome if too big and I know I won't be hauling kitchenware for a whole group of hungry campers. Paddling friend Rob Stevens (member here I think) makes them from that high end stuff...the 7ply - 1/4" baltic birch. Lightweight as far as wanigans go with quite a bit of strength.

rpg: Never really thought about the lid letting in rain, but you've got a good point. I just followed what a saw as the common lid method for those Temagami / Keewaydin style wanigans.


OM - your thoughts about feeding the soul are spot on. Felt like this tough winter ultimately had a saving grace spent working on rejuvenating projects. The illustration on the lid is from Calvin Rutstrum's North American Canoe Country. My edition is a retired library book from '64. Lots of great black and white illustrations there. Here's a shot of the original pic. 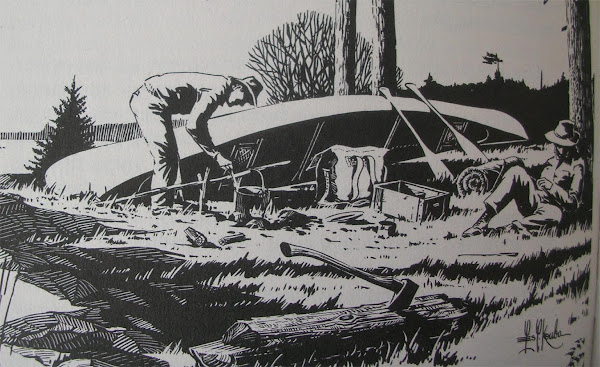 Since I pretty much go out solo, took out the two gents in the pic and just wanted the scene. Liked it because the canvas pack reminded be of my own gear.


Robin: No real tutorial. I just printed off the image and enlarged with photocopier to fit the lid. I use some transfer paper to get the basic outlines of the shapes and then do the fill work free hand with a basic woodburning pen got at an art store for a few bucks...something like this. You can also transfer images by printing an image on a laser printer (not inkjet) and then vigorously rubbing a solvent like denatured alcohol or citrus-based cleaners onto the paper to transfer the ink outlines. Always liked those double curve scroll motifs so used those on the side but pine doesn't burn well with the woodburning pen because of the grain and resin content. For some inspiration, there are a lot of documented designs available online in Frank Speck's 1914 book Double-Curve Motive in Northeastern Algonkian Art.

You guys have got me all fired up; no canoe building next winter, going to work on some wannigans.

That looks fantastic!! Truly a work of art...I want that lid to hang on my wall!
Some of the stuff you guys are building does surely inspire me.

Thanks for sharing your thoughts on the art of transferring the image onto the wood, seems like something I could do. Like Red, I built some boxes years ago but nothing like yours or Oldie's. I used them when my sons and daughter where small for canoe camping, but those trips where portage free and heavy on the food and gear, they also doubled as a seat. I now store my gear in them as I am so used to going with packs.
But, when I use my wall tent with the wood stove a box is just what I need, here's what I use to eat off of when camped with the canvas tent and then at home I store gear in it. It's been around awhile so it's not too pretty, but serves the purpose. I would like to retire it and build one as nice and functional as yours.

Nice work, as with others here wannigans are a project I'd like to tackle at some point.

How long are the tails on your tumpline?

Sweeper, the tails needed to be about 9 feet long. I could only source out 3/4" straps that were 6' long. Got three of them and cut the 3rd one in half to add 3' to the ends of the other two. Stitched and riveted with a few inches of overlap. The headband is from a 3" x 18" piece. The whole thing took a while to oil and soften but it was pretty relaxing during the crappy weather. 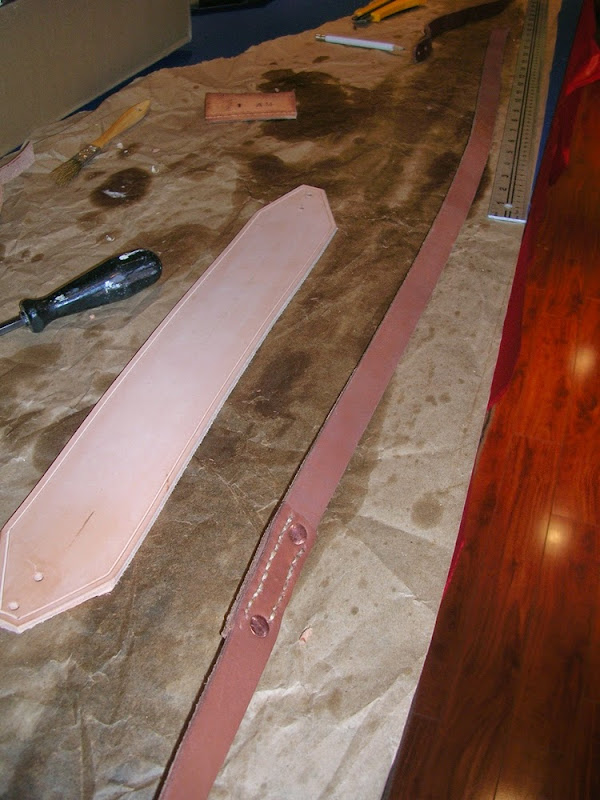 Wowee!!! Nice job. Although I only own and use modern stuff the classic, traditional canoes and gear really do appeal to me. Thanks for showing us your work.
G

Where some people see yet more extra book shelf material, or firewood amongst extra wood shop pieces, Murat sees a beautifully crafted wannigan waiting to happen. Nice work Murat! I love the burned images you've done. Like those of Oldie's, they invoke an appreciation for the past. That's also a fascinating link to Ojibway design.
S

Absolutely beautiful work. Both you and OM are an inspiration. I do seasonal work for a program in the Adirondacks where wannigans and tumplines are still available for use but I doubt any of them have gone on a trip in years. I used to be the person who demonstrated how to tie up the box using the tumpline. I'd then put a student (one of the smaller ones) on the box to show how you could carry weight efficiently. In the dining hall of the program there were two photos from a long ago copy of National Geographic that showed to Native people with extremely heavy loads that were being carried as part of a contest. The load was made up of dry goods (sugar, tea, flour, etc.) and the winner got to keep all that they carried. I remember being blown away by the weight both the men's & women's winners were able to handle. Made me feel like an absolute wimp.

Murat,
You did good. That is what canoeing is all about. Investing in your outfit. I like to draw on the sides of my canvas canoe with scenes that fit the river I am paddling. The feel of Duluth packs, homemade paddles, and a Dutch Oven are part of the reward of traveling with paddles. It is fun to wear old timey clothes and cook on a fire. I don't care much for all of the brightly colored nylon and titanium out there. Food deserves some special consideration on a canoe trip. Your wannigan is a very fitting way to do it.
W

I was looking around on various woodworking sites this morning and found this one... the site has a bunch of well detailed projects including a wanigan that I thought might be of interest here.

Makes me want to build one from the extra strips and scraps of fiberglass I have from building my canoe.

That does look interesting. Thanks for sharing
You must log in or register to reply here.