I just bought a Sawyer 17'9" Cruiser for $200!!
It's got a broken seat in the back, otherwise in great shape. Spent most of it's life indoors. This is the Goldenglass layup, with red gelcoat, aluminum trim with whatever black coating.
I'll get some photos to post tomorrow when I bring it home. Even though it's not a stripper, it's still nice to have a good performing boat as a spare, or to loan out to family and friends.

What a find! I am waiting patiently for the right deal on a Sawyer Cruiser to add to my collection. Looking forward to the photos!
A

Nice canoe. When I was first getting into canoeing I picked up an old Cruiser in the Goldenglass layup. Really nice paddling boat and those are some of the most comfortable bucket seats I've ever sat in. I eventually traded it and always kind of regretted it. Then a couple years ago at the Midwest Mountaineering spring expo one was in the auction. It was the Superlight layup and had seen a lot of use. Many scratches and patches but they looked like well done repairs. It was the last boat of the auction and I bought it for $400. Talked the guy afterwards who owned it. It had been on well over a dozen trips to the BWCA and Quetico. He said Northwest Canoe had done all the repairs to it. Brought it home, did a little more patching, and now I've got a Cruiser again.

Well, I got home too late yesterday to take any photos.
But, I just went outside and took the Cruiser off my racks...here are a few photos.
You can see that the hull has had a couple of minor repairs, they appear to be well done.
Aft seat is split, I knew that from the original ad. A little sprucing up and it will be ready to enjoy on the water! 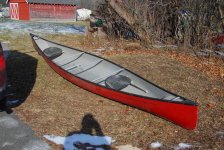 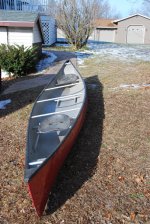 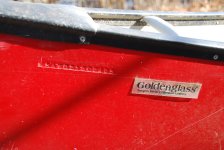 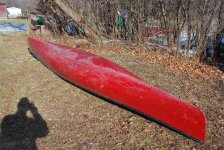 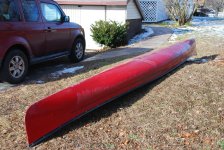 Nice find stripperguy. I scored a great deal on an old Sawyer cruiser last fall myself. Needs some repairs and I'm researching those now.

From every thing I've heard these are great canoes, great tripping boats.

My plan is to use this boat for my ride in a 340 mile marathon that I participate in every year.

Cruiser is a great Lynn Tuttle design, a downsized USCA tandem Cruiser to improve efficiency for smaller teams. Like all Cruisers, it could use more bow rocker for use as a tripper. Try running it upstream to demonstrate why.

Nice find,especially at that price. I am jealous. I am now hunting to find a nice Cruiser closeby, either kevlar, goldenglass or fiberglass. I am sure patience will pay off someday in the not too distant future.

bcelect said:
Nice find,especially at that price.
Click to expand...

Thanks...it's funny that the Sawyer should be the topic of discussion today.
We just had a huge lawn sale, extremely successful, even sold my old Mistral windsurfer. MDB looked around and said "now you just have to get rid of those two boats in the backyard!!". I said "Do you mean the Sawyer and the Mohawk? The answer is absolutely not!!"

I'll keep the Sawyer as a spare for friends and family, and the Mohawk is perfect for the few time I paddle the frothy stuff.

Yesterday was a very good day on Craigslist, and I am pleased to join the Cruiser club. It's a skincoat kevlar and it's taken a few hits, but they were well repaired with the work on the inside (not like my scuzzy Wenonah project). A few interestate miles were involved, but well worth it. Can't wait to get it wet. 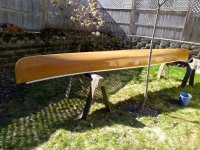 Thanks stripperguy! I was just about to ask you for a detail photo of your front sliding seat, but I see there's a set in your picasa site. My Cruiser is curiously austere on the inside -- white composite seats, both fixed; no footbrace; no float chambers. I really need a slider as my bow paddlers are 60-80lbs lighter than me.
P

NIce. It is one of the later ones in goldenglass. I was just telling the story of buying my first canoe a fiberglass Cruiser in about 1985 for $25. It had been wrapped and both sides were torn out of it. I repaired it and paddled it for years. They are fast but plunge through waves. I sold it after many years for $400. wish I had another one.

Sawyer fans, does anyone have a good (sharp, square, high contrast) photo of a old style (70's to early 80's) Sawyer logo, the one with the groovy font and crossed paddles? My old Cruiser has no markings at the moment, and while some people like that on their understated German sedans I'd rather let people know what it is. I have a plan to improvise a decal but I need an image to trace. Best thing I've found so far is the attached, but it's dark and not very sharp. Thanks in advance for any pix or suggestions.

Thanks guys. That white one Glenn points to has nice contrast. I'd love to get one like that but square on, since the transform adds fuzz, but that may be wishful thinking with a 40+ year old logo.

Stripperguy, that lady in the bow looks like she'd really pull that fire engine down the river. Canoeists are not normally in a hurry, but there's a good feeling to making a boat really move.

Haha
thats my daughter
she’s more like me than my son!!
And yeah, she can definitely move any boat quickly

I sure as hell wouldn't arm wrestle with her or that little guy behind her in the pic! ;-)
You must log in or register to reply here.