Alan Gage said:
I would think that would be the whole problem right there. I get slowly get dehydrated over multiple days if I'm not drinking 2-3 quarts/day, and that's just my regular day, which usually isn't very strenuous.

From my personal experience if you can keep up on water then extra salt isn't necessary. But if you're not drinking enough water you can't overcome that with salt intake.

Certainly there are situations where it might be necessary, and Yellowcanoe's could be one of them, but that's not normal tripping for most of us. For most activity, even strenuous, I just don't think it's needed.

That has been pretty much my experience as well.

Years back I used to do a lot of bicycling and one Spring a group of us went out to Utah to the canyon lands area and did a week long trek. This type of thing absolutely requires a sag wagon (in this case a large truck) to carry camping equipment, food, and most importantly large amounts of water. The guides from the company who ran the tour did the cooking and traded off driving the sag wagon.

Even in the fairly early Spring it becomes brutally hot out in that area. We would camp each night and get up at first light, pack our tent and sleep gear and put our stuff in the truck as the guides were making breakfast. We would try to get going by 7:30 AM at the latest. I had a Camelback Mule hydration back pack that held 100 oz and two larger plastic bike canteens on the bike frame each of which held 24 oz. In addition I wore a waist belt with a small fanny pack that also carried two smaller 21 ounces of water on each hip. That is a total of 190 oz of water, almost 1 1/2 gallon. I went through that by 10 AM at which time we all stopped and waited for the sag wagon so that we could "water up". We would then ride for another 1 1/2 hour or so before we stopped for an extended lunch/siesta and during that time I would drink about another gallon. In the afternoon we would ride another 1 1/2 hour or so before stopping to set up camp.

I was drinking at least 3 1/2- 4 gallons of water a day while riding, not counting what was consumed at meals. One never had any perceived perspiration whatsoever but by midday you could look down at your jersey and see a complex and intricate pattern of fine white lines where salt had precipitated. Our food was generously spiced, I'm sure, but I never drank any type of electrolyte replacement solution and didn't feel the need for any.

Thought we were talking exclusively salt here, but since we're not, I completely second tryin's post. Magnesium and potassium are also critical electrolytes, and calcium is another. A lot of energy drinks and "foods" for endurance sports try to put them all in, and are way ahead of things like Gatorade. Trying to think back to my bike racing days, but I'm drawing a blank. One easy to have on hand source of calcium though, is Tums. It has gotten me home from more than one bike ride where I started cramping. Potassium is also easy, bananas, but not necessarily on a multi day trip. Magnesium is the hardest to find ime.

It all depends on the person. My race partner will cramp up something fierce if he does not stay on top of his electrolyte intake. He drinks plenty of water but if he ever get behind on electrolytes his hands, arms will cramp up so bad he can not let go of the paddle or take a stroke. I've done it once last year but we was going pretty hard during a race. Normal paddling I drink water and mix in Tailwind or take Salt Stick tablets. Hyponatremia is one thing thing we have to be careful about here in the heat while paddling hard.

Cashews pretty much have it all........Salted are best. 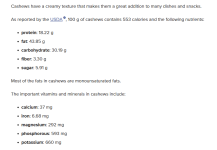 Jerky has been mentioned but only beef, I've pretty much entirely switched to pork jerky.

Miscellaneous things re discussion so far:

• Lots of medical authorities recommend drinking two quarts of water (or other liquids) every day even when home, doing not much. With this as a baseline, requirements would obviously be much higher during outdoor exercise, especially in heat.

• As far as drinking just water vs. water plus electrolyte replacements, recommendations change depending on the intensity of the workouts—e.g., this summary of a study, which says:

LiveWell recommends that adults and children should only consume sports drinks with electrolytes during or after extended and heavy exercise that lasts longer than an hour. Water is the better option for lighter workouts. However, after an intense and long workout, athletes would benefit more from eight to 16 ounces of a sports drink than from water.

Researchers compared the effect of only water; water plus 8 oz of a sports drink; and half a banana, using 20 competitive cyclists on a 47-mile bike ride. The results, published in PlosOne in 2018, showed that drinking only water led to high levels of inflammation in the study group's blood. When the cyclists drank the sport's drink or consumed the banana, the levels of inflammation were much lower.
Click to expand...

after extended and heavy exercise that lasts longer than an hour
Click to expand...

For most paddlers I would think that it's "extended" but not usually "heavy" unless portaging is involved.

I can paddle for 3 or 4 hours and barely raise my heart rate, on the other hand a 200m portage carrying a canoe and/or heavy packs will pump up my heart rate before I've covered 50m.

“Word of caution: don't "slug" these salts, especially on an empty stomach. Space it out over a half to full hour. Explosive decompression may result.”

One of my early jobs was working as “stool technician” with quarantined cholera patients, essentially weighing their, uh, output and dispensing the appropriate amount of OER solution.

I needed to observe them consume the OER, so they didn’t dump it out on the sly, and I would caution them “Go slow, take your time and just sip it ‘til it’s gone”. Most listened to my advice, some did not.

I can deal with watery crap, but projectile vomiting is a different story. I got skilled at ducking and dodging.

Mike McCrea said:
“That’s why we drink Powerade in Tallahassee”

That’s better than the name of the oral electrolyte rehydration originally developed at Florida State.
Click to expand...

I cringe at the thought!

“I cringe at the thought!”

Gatorade is a less cringy name than Seminole Fluid

Mike McCrea said:
“I cringe at the thought!”

Gatorade is a less cringy name than Seminole Fluid
Click to expand...

Recep, I compared your cashews with my preference for macadamia nuts and pecans. Cashews beat both in almost everything except calories. Macadamia nuts are 768 calories per 100 grams. Pecans are 691 calories.

Here in the south, in pecan country, they sell sweet and salty pecans. Sounds good to me.

But cashews beat both on the basis of overall nutritional value. I just don't like them as much.

I worked summers outside in Illinois and had to take salt tablets on the hot days. More recently, I ended up with heat exhaustion out in the 10,000 Islands. A brisk Gulf breeze swept away all the sweat before I even knew it was there.

Certainly summer trips even in Canada would sometimes result in days hot enough and sweaty enough that I craved salty snacks.

I forgot to mention this is probably my favorite snack of all time. Quick and easy to eat in the canoe. 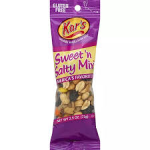 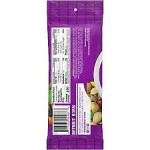