Playing off PaddlingPitt’s “Ever been rescued or evacuated?” thread, who here has abandoned a canoe?

I’ve come close a couple times, one I didn’t think was getting unpinned, but (knock wood) never yet walked away. Thought about it a few times.

I know a number of folks on Canoe Tripping have left canoes; irretrievably pinned, damaged beyond repair or, not exactly “abandoned”, but washed away in a flood (or left poorly secured for the night). Including one alluded-to story (Ben?) I have yet to hear. It might be educational in a cautionary way to hear those tales.

We could have abandoned the canoes & gear and hiked out along the beachfront. Long ugly hike in beach sand, but do-able.
Click to expand...

That near abandonment was reprised, once again on Assateague; the closest I have come to leaving the canoe and walking away. Freaking, freaky Assateague; out of 1000 canoe trips I have probably paddled Assateague 50 times, yet somehow have more memories of travails and tribulations there than anywhere else in the country. It is a weird place.

Standing against the Atlantic Ocean the weather is, uh, peculiar. A strong wind from the west will push bay water into the marsh, resulting in a high tide and a really high tide. Reverse that and a wind from the east will drain the marshes to low and “Where did the water go?”.

The oddest weather phenomenon encountered on Assateague was a fog wall. We awoke one dense foggy morning at our bayside campsite, and decided to hike the mile east to the Atlantic shore. Half way across the island, in the scrubby open middle, we stepped out of the fog. It was like stepping out from behind a curtain. A couple steps east it was sunny and clear, and behind us was a well defined vertical wall of fog. Of course we had to dash back and forth; sun, dense fog, sun. Freekeeey.

I digress, but that island weather weirdness came into play in almost abandoning our canoes. We were on a group canoe review trip, swapping off boats and test paddling five different Prospectors. Early one morning Tom, Topher and I elected to take a couple of the canoes and do a day paddle to the next site further south.

Gentle breeze and beautiful weather, so beautiful I hadn’t checked the forecast. After an easy paddle down to the next site we landed and hiked the mile across the island to the beach side. Equally beautiful, and we lingered for half the day. That afternoon, hiking back west to our canoes on the bayside, it became windy. Increasingly windy the further west we hiked. Protected by the dunes and stands of Virginia pine near the bayshore we had not realized just how windy it had become.

We did not appreciate how windy ‘til we walked out past the pines; the 5 mile wide open bay was a storm tossed, white capped tempest. Not where you want to paddle unburdened Prospectors; we had a couple long peninsulas to paddle out and around on the open bay route back, and couldn’t have made headway in that maelstrom if we had unwisely tried.

Fortunately, I’ll call him “McCrea”, knows a sneak route back through the more wind and wave protected marsh. Gotta hand it to that McCrea fellow, he’s a sharp cookie.

Unfortunately McCrea began to exclaim that the sneak route did not resemble his previous experiences; the wind had piled so much water into the marsh that nothing looked familiar. We (he. . . .McCrea) made a few wrong turn route errors.

Even more unfortunate that effing moron McCrea had not taken into consideration that his sneak route necessitated crossing a number of wide guts and channels, fully open to the howling bayside.

Crossing the shortest distance, broadside to the focused and funneled wind and waves in an empty Prospector was not possible. We had to cross diagonally with the wind, and each time we did were pushed still further inland. Think repeatedly swimming “across” a fast moving river.

Topher was paddling a 15’ 6” SP3 Prospector, and managed OK, but Tom and I were in some 17+ footer and that sucker desperately wanted to get sideways and broach. And nearly did a few scary times.

I have had more fun in a canoe; it didn’t help that Tom kept wanting to stop for a bite to eat, and I kept yelling “F#$% FOOD, PADDLE DAMMIT!” But we got to see parts of the inner island never before explored by boat.

Night fell. Tom insisted we stop for a bite to eat. By then we were so far inland that we ran out of water as the wind finally diminished the marsh slowly drained. Dragging heavy RX Prospectors through the marsh in the dark, unsure of exactly where you are is not a recommended activity. I might have simply abandoned the canoes at that point, but they were loaner boats from the different manufacturers.

Well into the night, mud covered and stumbling in exhaustion, we glimpsed a campfire. A campfire oddly a half mile west of our struggles deep in the marsh. It was the rest of the guys back at camp, by now anxious as to our whereabouts. Eventually they heard our plaintive cries and slogged out to help us drag the canoes the last half mile into camp.

It was undoubtedly the most tiring “day paddle” ever, made so by a compounding series of mistakes and bad decisions. Most of them mine.

In terms of the number of words, the new you appears remarkably similar, even indistinguishable from the old you! Good story though. Perhaps it could not have been told in fewer than 100 words.
M

PaddlingPitt said:
Perhaps it could not have been told in fewer than 100 words.
Click to expand...

Went for a day paddle using unburdened Prospector canoes. It got windy. Some guy declared that he knew a wind protected sneak route through the marsh. The wind flooded the bayside marshes, and pushed us further and further inland. He got us lost. The same guy refused to stop for a bite to eat.

We could not cross the open guts and channels without paddling at a downwind angle and ended up a mile back in the marsh. Night fell, the wind died down and the wind driven water drained from the marsh.

Made it back. 99 words exactly.

mmccrea said:
Went for a day paddle using unburdened Prospector canoes. It got windy. Some guy declared that he knew a wind protected sneak route through the marsh. The wind flooded the bayside marshes, and pushed us further and further inland. He got us lost. The same guy refused to stop for a bite to eat.

We could not cross the open guts and channels without paddling at a downwind angle and ended up a mile back in the marsh. Night fell, the wind died down and the wind driven water drained from the marsh.

Not my canoe but this May a friend nearly had to abandon his pinned 16' Royalex Prospector which was pinned beneath a strainer on the Buffalo River in AR. Took four days and the help and input of multiple individuals to get it out.

I've seen canoes lost temporarily or permanently in whitewater, but don't know that "abandoned" is the the right word.

I and many others have come out of canoes in hard rapids and have had the canoe disappear downstream out of sight, but luckily found at some later time pinned on a rock or bridge abutment or just floating in an eddy.

One time in fast rising New Hampshire snow melt river, I dumped while while trying to rescue paddler A and came out of my boat, which disappeared downstream. Paddler B began to rescue me but he dumped and came out of his boat in the process. Everyone pulled off the river and stopped the trip because of the increasingly rising and violent water level. My boat was eventually found downstream; B's boat was never found.

On another steep mountain river in New Hampshire, A and B, a teacher and student, were paddling tandem in a borrowed canoe and B was using a paddle borrowed from me. They dumped at the takeout, which was right above an unpaddleable gorge, and the boat and my paddle disappeared into the gorge never to be seen again. Everyone abandoned any effort to rescue the boat because of fear of the gorge. A and B eventually paid to replace the borrowed but lost canoe and paddle.

Once in California, we abandoned a canoe wrapped around a rock in the middle of a wide river because we didn't have sufficient rope or paddler skills to reach the mid-stream rock. The next day more skilled paddlers with better equipment managed to unpin the boat at a lower water level.

I've also seen the ultimate abandonment in whitewater in New York -- the death of a dumped rafter who drowned when his leg got pinned between rocks on on the river bottom.

We have never endured the experience of abandoning a canoe. But here is Kathleen visiting an “abandoned” canoe on the Coppermine River, NWT. Don’t know the story, but we came across this just below a set of 4 very challenging rapids. 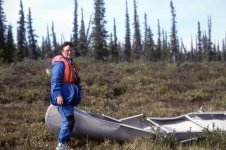 Some people may be aware that I'm very fond of my (yellow) Mohawk XL14, so much so that in 2018 I bought another (red) one as a backup for when the time came that I finally destroyed the yellow one (I am known to some as the "canoe killer").

I didn't know at the time that just over a year later I would do an "emergency" exit from a trip and while I was able to bring along all my gear I sadly had to leave "old yeller" behind. It's coming up on 2 years now that it has been sitting out there all alone stashed in the trees near the river.

At some point I have a plan to get back there and recover it, not sure when that will happen as it's a bit complicated to get to that location and then get out with two canoes.

Yeah, one day I'll get my crap together and finish writing up the whole sordid story, might not happen until after a successful recovery of Old Yeller (which might even happen this Fall).

Interesting thing about the location, just a couple of hours upstream there is the remnants (the back half) of an Esquif canoe pinned out in the middle of the river. I don't know what happened to the occupants of that boat. It was from one of the well known canoe camps so there was no doubt a multi-boat group and unlike my adventure there was help at hand.


For another "experience" and a bit of a reversal I have also been abandoned by my canoe which went for a long solo paddle leaving me behind, that story had a good ending because the canoe was eventually found and recovered about 125km downstream stuck on a sandbar where the river empties into Ungava Bay and the North Atlantic.
You must log in or register to reply here.

4 days at a small lake in northern Maine