3 day Father & Son Trip in the Year of the Deer Fly!

Got to spend some quality outdoor time with my older boy on our annual father son trip. For the last two years, we've been visiting the Haliburton Highland Water Trails (formerly Frost Centre) to explore these well maintained waterways.

I had planned to take him further north on a more adventurous route to Temagami for some Crown Land camping but part of the area recently came under a voluntary evacuation due to serious forest fires. Given these conditions, we decided to make an easy trip to familiar waters so we went back to the HHWT. The summer has been hot and dry and we went in knowing the area had a daytime fire ban. Turns out the day we paddled in, a large swath of the region (including Algonquin Park) declared a total fire ban so no campfires in the evening either. That kind of changed things since I was hoping to kill time making him process firewood and lounge around the fire at night.

We brought along our wanigan and a few other bits of homemade gear including his custom paddle made last summer, folding bucksaw chair and our trusty set of oil tanned leather moccasins. Along with these luxuries, my little guy wanted to bring his acoustic guitar for entertainment so we didn't want to do something too excessive. We had anticipated one night at the far end of the access point lake then we would paddle a short stretch of river, take two easy portages (less than 100m each) over to the next lake for an additional two nights.

We arrived to an near empty lot with only one other vehicle parked at this normally busy access point. Glorious weather was predicted for the week so the fact that we would see only one other group was a nice surprise. 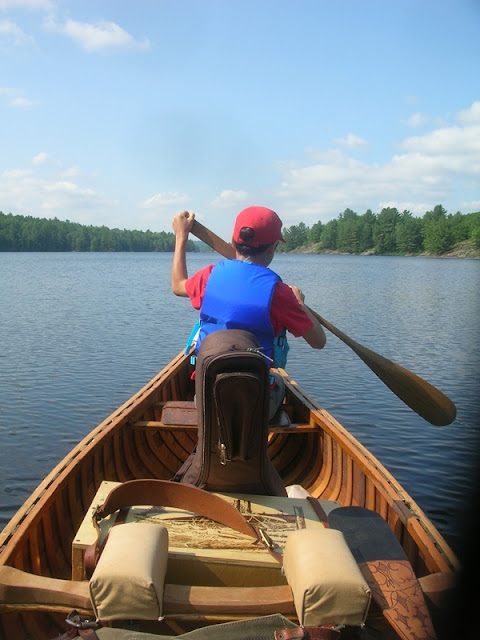 After a leisurely paddle down the lake, we explored the campsites along the route for future reference. In the end we ended up with a nice peninsula site tucked in its own private bay that had two tiers of elevation and a large rocky expanse to lounge around. 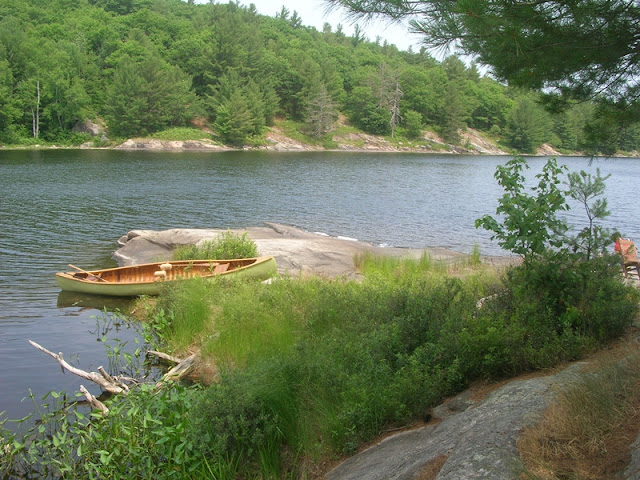 We set up our tent under a large pine by the shore and also hung our water filter system on a cut branch stub. Some flat boulders near the tent pad served nicely as a bench. 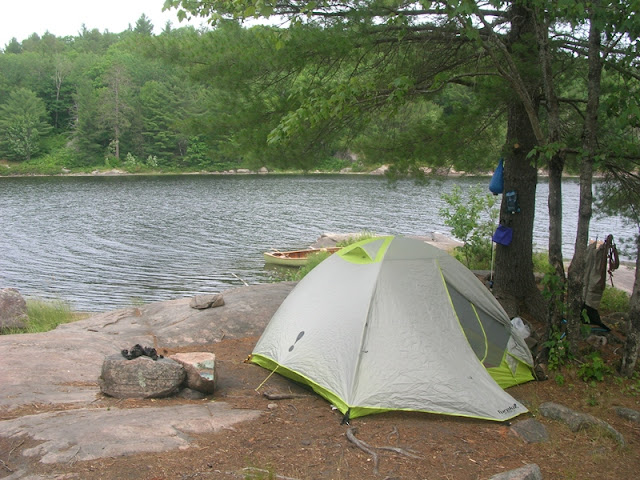 The rocky frontage had many little points where the lake depth dropped quickly. After helping out with the site setup, my boy grabbed his rod and started casting right off the edge. 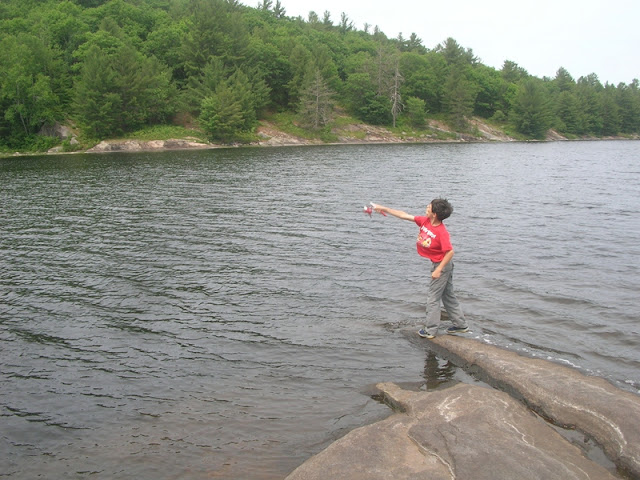 No bites at this time of day, so he decided to take out his guitar and jam. Can't quite see it in the photo below but there was a loon in the distance serving as his lake front audience. Got a couple of loony wails when playing some acoustic AC/DC. 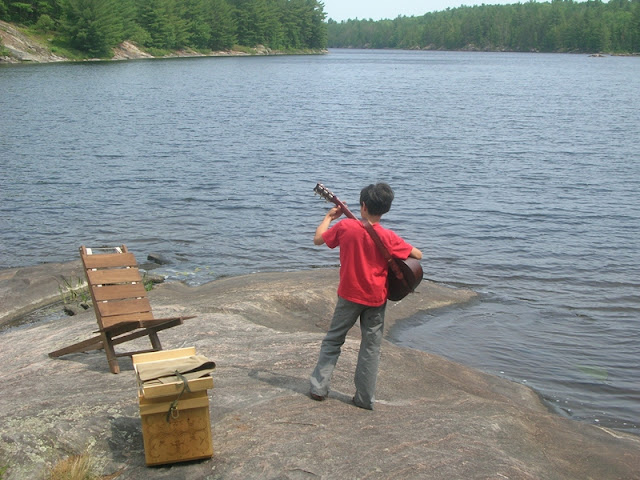 While he was rockin' out, some food was prepared and I got to enjoy a mid-day cappuccino in a new camping cup. The cup was made from a split coconut shell sanded down to remove all the hairs and a piece of antler for the handle. 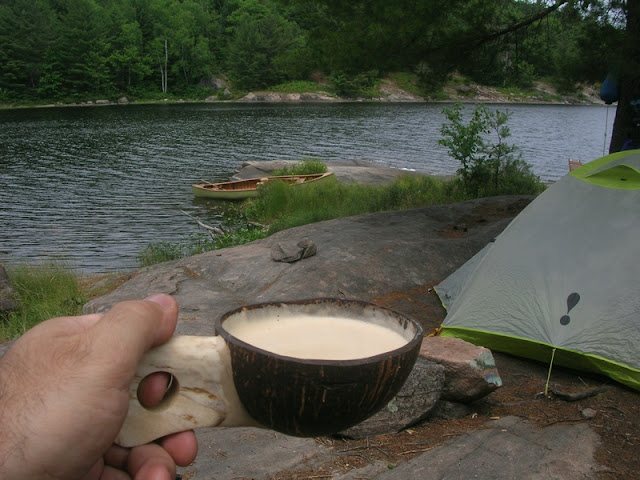 After a nice shore lunch by the breezy shore, I surprised my boy with some bushcraft gear I made over the off-season. 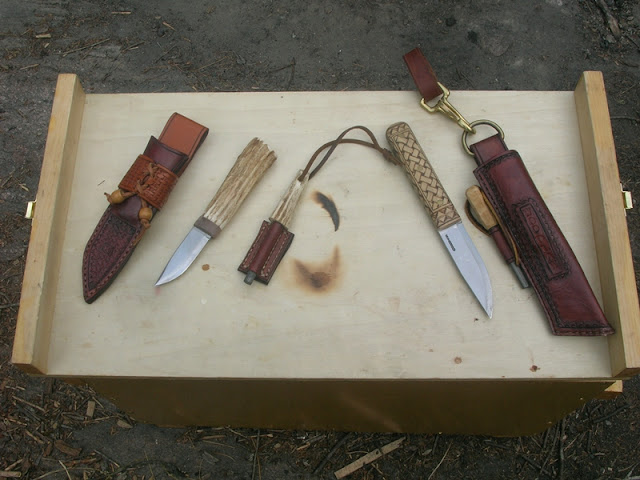 The set included his very first "real" knife and firesteel combo. Up until now he's been playing and practicing with a wooden set made a few years back. Used a Helle Fjording blade (short 70mm = 2-3/4 inch long) with a walnut bolster and elk antler handle. Also tried a different sheath and belt loop design with stamped markings and his initial. The pointy tip from the antler piece was re-purposed as a handle for his own ferro rod. Leather scraps were stitched up to make a belt holder.

Also ended up making myself a new knife using a very affordable Condor Woodlaw blank. Decorated the olive wood scales with a bit of pyrography and made an accompanying dangler sheath - a very comfortable design for canoe camping when you need to sit or kneel in the boat.

Anyway, my son loved his new kit. He wanted it on his belt right away and pretty much kept it on for the rest of the trip. 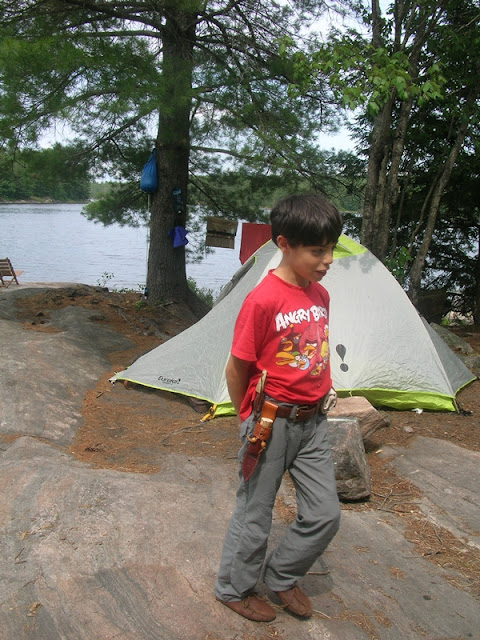 Later in the evening when the wind died down we tried our hand at fishing as well as exploring a wetland for any wildlife. 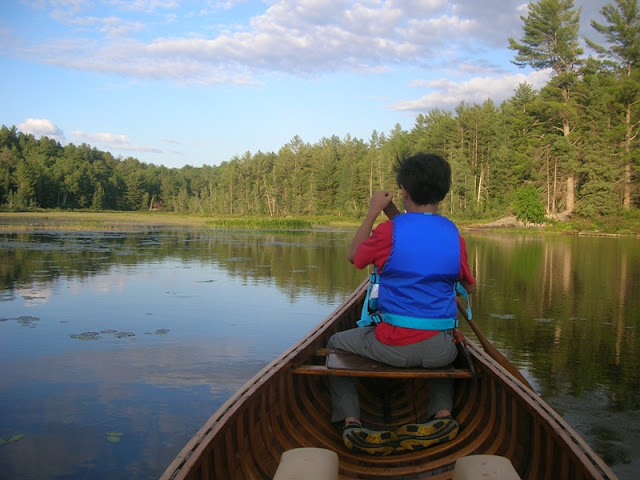 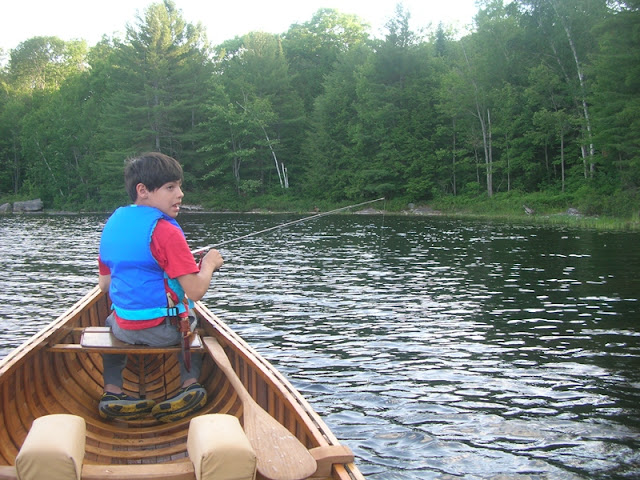 Day one ended well and the following morning a beautiful mist was rising off the lake. 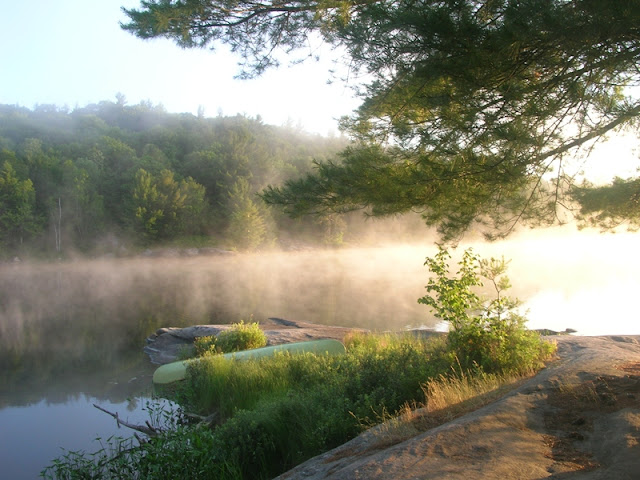 The mosquitoes were out at this time, so with armed with a bug jacket, another attempt at fishing was made while breakfast was being prepared. 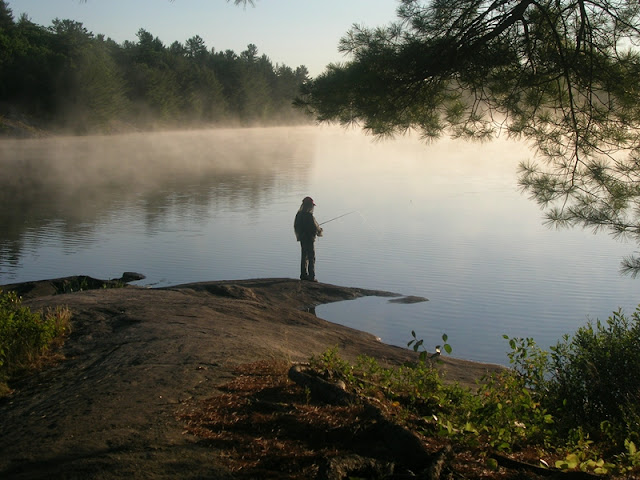 No bites again so the patient fisherman wanted to paddle and explore another section of the lake. The mosquitoes weren't quite as bad by this time but the deer flies came out in aggressive hordes. Never been bothered by bugs in all my years of camping but have to admit this year's deer fly scourge even got me frustrated. 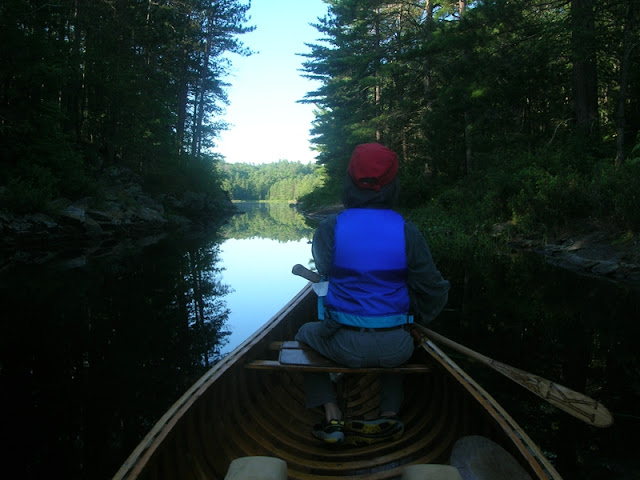 Time had come to pack up and move to the new campsite (the same one I stayed on during my solo trip last fall), but the thought of dealing with the blood thirsty deer flies on the paddle over and portages through the bush didn't seem too much fun. So far we had the whole lake to ourselves and despite being booked on another site, we decided to bend the rules and stay on being ready to move on if anyone came.

I was going to keep our bug shelter at home and just rough it with bug jackets. At the last minute, my boy mentioned we should bring it just in case. He even moved stuff into his pack so we could make space for this bulky piece of gear in the main pack. In the end it was a super smart move! We set up in an elevated part of the site and this became our home to cook and relax in relative backcountry comfort. 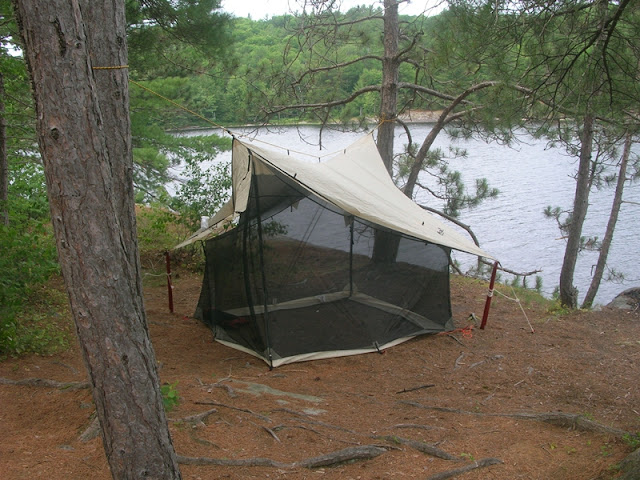 The wanigan proved to be a great practical use on this trip again. It was our kitchen, our table and our entertainment centre. The chess set I made with wood scraps and the inner tray got lots of usage. My son played lots of chess at school this year and decisively beat me every single game. 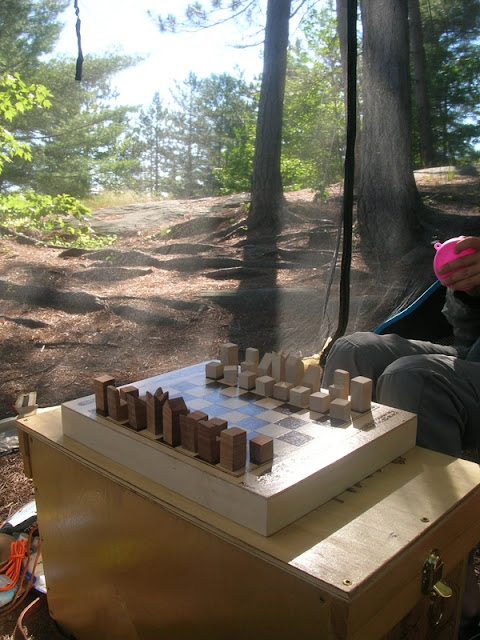 "You should stick to making stuff instead", he said.

That reminded me of another camp gift I made buried deep in the pack. Years ago spotted a design on the BushcraftUSA.com site of a folding canvas and leather pouch. I stitched the sack from a scrap of dropcloth tarp and attached the leather components that serve as a belt loop and cover. Explained to him that he could keep the pouch folded up on his belt and then open it up to throw-in whatever he collected. Here's a shot of the "Dump Pouch" on his hip. 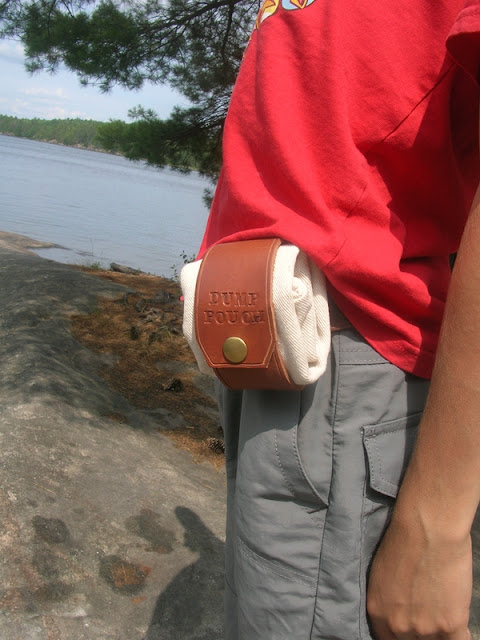 With bug shirt back own, we explored the thick bush behind the site to find various forms of tinder. I gave him a challenge to try and find things that he thought he could light with a spark from his ferro rod. 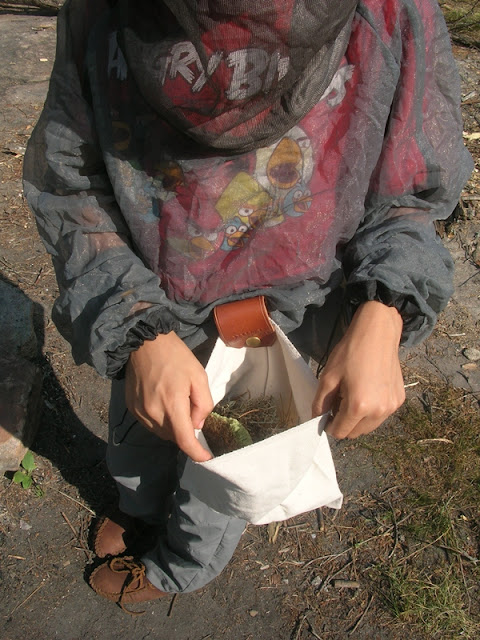 In the end he collected some dried sphagnum moss, old man's beard lichen, reindeer lichen, a pine cone, and some birchbark. 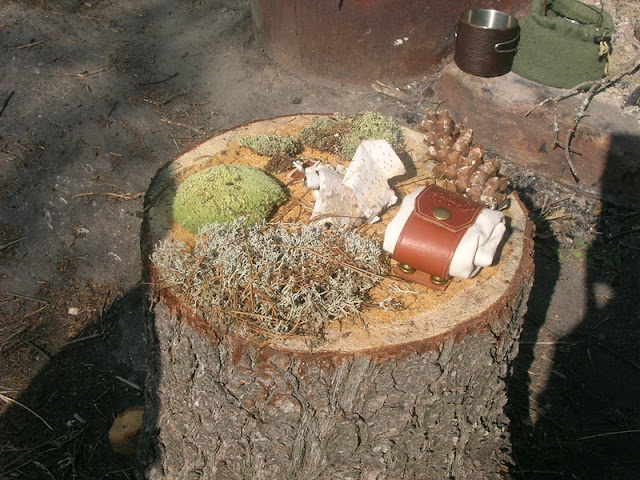 Given the total fire ban, we packed these up to bring back home and experiment in the safety of the yard back in the city. Another trip is in the books and hopefully we'll get some more family paddling in later this summer.

Thanks Murat, another wonderful trip from two gentlemen of the woods.
Last edited: Jul 16, 2018
D

this is it right here, no better way to spend time with your son. Thanks for taking us along with you.

Yup, great father and son trip! Thanks for sharing

Great trip report. I still remember the many trips my Dad and I took long ago; I'm now 65. Please know that your travels will stay with him forever.

That is one lucky kid to have you as his dad. Great forethought in planning the trip, nice surprises doled out over the course of the trip, lots of activity despite the fire ban, and the passing on of skills. And good attitude to the bugs---they exist, so deal with them, wear a net, and keep on fishing'. Great stuff all round, Murat!

60 years from now he'll be passing that blade on to his grandkids. "This was handmade by my dad, your great grandfather, and given to me on a father-son canoe trip. It's really special---a family heirloom!"

[Hopefully the kid doesn't reply, "What's a canoe trip, grandpa?" If he/she does, we'll know our generation royally screwed up!]

Wow! Yep, that kid hit the lottery getting you for a Dad, and I'm sure you feel the same way about him. I especially loved that he insisted on the bug shelter. It's good for kids to see their input pan out.

Reminds me of my own Dad and the trips he took me on. You are doing it right! Thanks for sharing this.

Appreciate all the feedback everyone! The little guy also helped me out at the Wooden Canoe Assembly in Peterborough this past week. He really liked the kids scavenger hunt at the Canadian Canoe Museum. We're off for some more paddling next week.

Very nice. Awesome bit of kit you've made for him. Also, that photo with the canoe and the mist rising off the lake is excellent.

Man ho man it is always a pleasure to read your posts!! Look like a great trip you had!!!

Looks like you had a great time in spite of the bugs and lack of a fire.

Very impressed by the leather work and the knives. Helle blades are great value. I have a couple of their knives and am plucking up the courage to buy a couple of bare blades from Canadian Outdoor Equipment to try making my own.

With all that fantastic traditional gear I expected to see a canvas tent and tarp, Maybe that should be your next project?

You got some real good photos too, and it looked like a great time. I also like the bag idea.

Fantastic! Good for you and your son. Acoustic AC/DC? Yea Baby! Loved all of those neat tools you made for him. Hmmm, ever think about adopting a 57 y/o male?

Very nice report, great pictures and I love the family approach!
You must log in or register to reply here.