After trying and failing to get a group together for the last two months, I decided that it was getting pretty late to have an opening trip. So, my son and I threw our gear in the truck and set out on a single-night outing.

I had planned to travel a new section of river, but the access point for my planned put-in had been blocked. The gate looked pretty new, so I'm guessing that the hordes of new paddlers forced the property owner's hand. He had previously allowed entry to the river through his field access drive, as long as you didn't park. Oh well, plan b.

We put in at Perkinsville and paddled down to a small island where we set up camp. We initially missed the landing, necessitating a quick upstream paddle to get back to the "top" side of the island.

The river was in flood a couple weeks ago, so a lot of the area is still soggy. There was one decent tent pad and plenty of firewood, so it was a go. 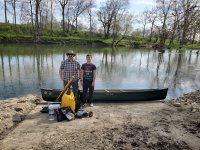 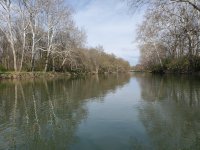 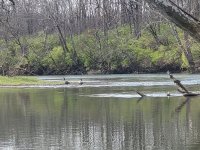 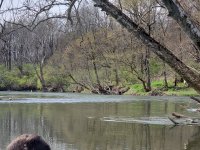 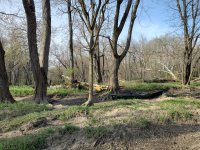 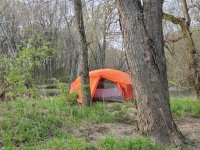 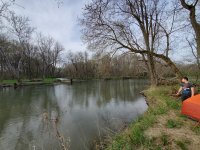 Have the flying Asian silver carp infested the White above Indy yet?

pblanc said:
Have the flying Asian silver carp infested the White above Indy yet?
Click to expand...

Not yet. Say what we will about low head dams, they sure seem to help slow the spread of invasive species.

After making camp, it was finally time to eat. I work night shift, and we had hit the ground running as soon as I awakened, so I was good and hungry. 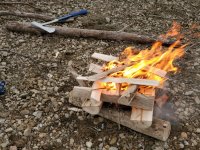 My son wanted to use the new MSR Pocket Rocket he received for Christmas, so he enjoyed some teriyaki chicken and rice from Mountain House whilst I cooked up a strip-n-eggs dinner. Zach spent a lot of time looking for this and that piece of gear that he had set down on some convenient surface. Small lessons in efficiency. He did have one bit of alarm when he realized that he had not brought a method to light his stove. I have been allowing him more and more leeway in trip planning and packing with the intent of having him learn the importance of detail, so at first he was a bit down on himself. After a bit of thought, however, he remembered the ferro rod in his survival kit. He asked if it would work to light the stove and I winked at him, telling him to try and see. He was quite pleased to see that blue flame roar to life. 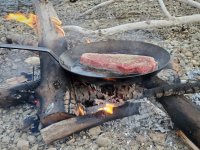 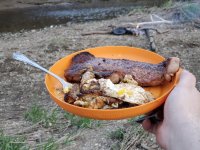 The heavy SSE wind had died to a nice breeze, so after dishes, it was fire and silence time with the reflective mood occasionally punctuated by some witty remark from him. He's definitely showing his teen-ness these days... 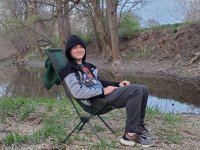 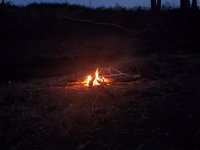 We were off to bed at around 22:30, with a sweet breeze and chorus of frogs.

The night passed fairly swiftly, with good slumber. I rolled out of the tent at about 8 and found that the day was bright and breezy. 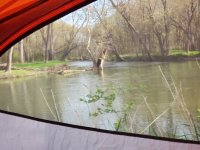 Zach was already up, waiting on his biscuits and gravy to finish the reconstitution process. Mountain House makes a SOLID biscuits and gravy. Probably my favorite meal from them. He had avoided using his phone the night before to conserve battery life, so he was busy catching up on whatever e-life events he deemed to be warranted. 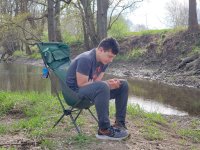 I set about making another fire for another steak. One beauty of the quick overnighter is the ease of which fresh food can be utilized. 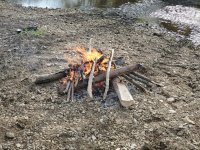 We broke camp in a building wind, making the tent tear down a bit dicey, and set off on the remaining 4-5 miles of our journey. The backup plan had us taking out just a bit down from camp, but with such a beautiful day to travel we elected to continue down to Koteewi Park. 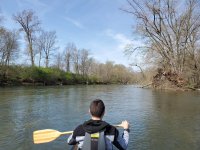 On the way, there were several riffles to add to the excitement of being back on the water. We passed hundreds of turtles, at least eight Blue Herons, many waterfowl, and one river otter. There were also some interesting man-made features, such as these transmission lines humming and buzzing away. 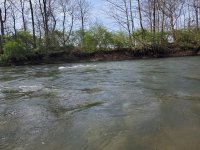 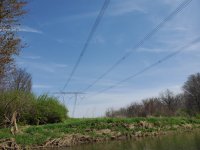 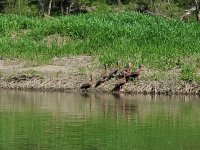 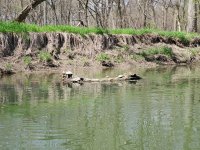 Almost quicker than it took my corpulent fingers to type this, we were at the takeout. Loading the gear was accomplished with a minimum amount of fuss, thanks to the many improvements to the launch by the Hamilton County Parks Department. I stopped by the exit to photograph one of the ten art installations that are made up of old worn-out Grummans donated by a local outfitter and painted by area schools. 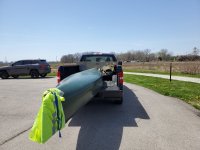 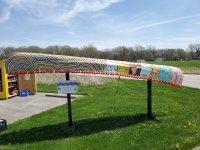 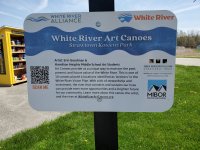 Until the next one, my friends!

Great report. It reminded me of the motherland (from Illinois).

How do you like that carbon steel pan? I’m curious about getting one for some weight savings as the big cast iron is a beast.

Maybe I missed this, but how did you shuttle your truck?

Cheeseandbeans said:
Great report. It reminded me of the motherland (from Illinois).

How do you like that carbon steel pan? I’m curious about getting one for some weight savings as the big cast iron is a beast.
Click to expand...

I like the carbon steel better than cast iron for open fire cooking. It transfers heat better around the pan and I've never broken one by dropping it on a rock. It cleans easier, even when you get it too hot, and doesn't split in two after being dropped on a rock. It doesn't "hold" heat as well for baking and such, so more care in cooking is required, but have I mentioned that it doesn't break when you drop it on a rock?

And yeah, the weight and bulk savings over cast is significant. Not as much as a slick titanium unit, but I worry about the coatings at high temperatures. This one goes with me anytime we plan to eat fish or take any other fresh meat along. And, I don't worry about rocks...

**Edit to add that the flared sides REALLY aid in getting the pan level on the fire. You can just rock it around, using the angle to make fine adjustments against the wood.... or rocks.
Last edited: Apr 23, 2022

Glenn MacGrady said:
Maybe I missed this, but how did you shuttle your truck?
Click to expand...

) dropped us off and picked us up. She is a saint.
You must log in or register to reply here.