The most you've ever paid for a canoe (buy or build)

Membership divorce rates will surely spike if people honestly answer how much they really paid for their canoes.

We have a don't ask, don't tell policy in our household, though I'm not so naïve as to think my wife doesn't know exactly how much I spend on gear.

Have a deposit on a Rheume Prospecteur Kevlar 17' which is $3600 but includes $200 of free gear (getting a Bending Branches paddle) and will be picking everything up next month.

Our wooden kayaks were built from CLC boats kits and with shipping cost about $1200 per kit.

Our skin-on-frame boats (kayak, canoe and SUP) ran $200-$300 a piece for the books/plans, wood, fabric, paint and other materials.

“We have a don’t ask don't tell policy in our household, though I'm not so naïve as to think my wife doesn't know exactly how much I spend on gear”

I know the missus knows how much I spend on boats and gear, although maybe not the non-boat accumulation of paddles, tents, tarps, sleeping bags. . . . .

She knows the cost of the boats, all bought at some blem/demo/discount or used, some of them on the cheap. But I may have over-shared regarding used or replacement value.

Some years ago I looked into an insurance rider to cover the replacement cost of our various at-the-time boats. I was taken aback by the numbers, and showed her the list, per boat and the total.

If you have a lifetime accumulation of paddle stuff, especially if you have un-used boats, that resale value exercise can be eye opening. And wallet fattening; we sold four unused tandems at first-come prices in the last few years. $4725.

Geeze, I could afford to buy a new UL carbon canoe infused with synthetic spider silk!

I bought a Novacraft Cronje in Aramid Lite in 2019/2020. Closest dealer was in Quebec City - a 7 hour round trip for me. Headed out in August to test drive a few before settling on the Cronje. He did not have an aramid lite in stock and was quite intent on selling us this ridiculous 16' carbon fibre prospector made by Canot Rheaume (presumably the same mold as Langford) - I think it weighed 32lbs. We said no and that we would need to consider our options before committing to a pre-order. My wife said she heard him mention to another staff member that we were "des teteux" - like tire kickers, but much more rude. She wisely waited until we were about halfway home before telling me.

Given that our only other option for a custom order from NC was to drive to their London, ON shop, we did not have much choice. I ordered from rude guy anyway and figured at least this way he'd have to eat some crow. It arrived in May 2020 and I was a bit worried about navigating the various Covid intra-provincial travel restrictions. But we made it and plonked down the balance - total about $3500 - and made our way home. We stuck it on a rack in the garage. We made one, 5 km trip with it on a river close to home, just to try it out.

It was soon after that I decided I wanted to build another stripper and ordered the plans for a Freedom 17. Given the market for used canoes at the time and my slight disappointment in the build quality of the NC, I decided to sell it while the getting was good. Lost no money other than the fuel for the trips.

Boreal Birch said:
After a down payment of $500 to get on Joe Seliga’s waiting list, I started to squirrel away money for the day my beautiful green cedar and canvas Seliga canoe was ready to come home. Nearly five years later on May 26, 1992, Joe sent me a note that she was ready to leave his shop. I had sent him a total of $1700 US dollars in three installments over the intervening years.
Joe told me he could keep it indefinitely in the attic of his canoe shop, in Ely Minnesota, until I could figure how to get it the roughy 3500 miles to my home in Alaska. Within a few months, I read in the Boundary Waters Journal that the publisher Stu & his family were coming to Fairbanks to race in the limited class sled dog races in March of 1993. I called them to see if they had room on their dog truck to bring a canoe, in exchange for bringing my canoe the could stay with us for the duration of their stay. That sounded good to them, so in late February of 1993 our Seliga canoe started the long ride to Fairbanks.
Since Jerry Stelmok’s book about the Seliga Canoe and then the death of Joe, the cost of one of his boats has jumped to the seven thousand dollar mark. I guess it was a good investment, at the time it seemed like a lavish amount to spend on a canoe.
As a side note, it was in a yellow Joe Seliga Canoe that my future wife and I remember first talking to each other. It was at a YCC Forest Service Camp in the Chippewa National Forest in Minnesota. The canoe belonged to one of the camps guest speakers, he had encouraged me to take it for a cruise around Lydic Lake. I needed a bow paddler, that will be fifty years ago in this coming June.
Click to expand...

That is a really cool story.

I haven’t been into canoe ownership for all that long, but I have built all of the ones I have owned. In terms of the cost of what actually makes it onto the boat the most expensive would be about $1,000 - $1,200 CAN on a 17.5 foot cedar strip tandem I finished last year (S-glass is crazy expensive here). But in terms of the total out-of-pocket costs of each boat I have built (including things like wasted wood from botched cuts or crappy boards, wasted epoxy from botched or too big mixes, hardware and tools I thought would be helpful but aren’t, hardware and tools I bought but found out later I already had) my costs per boat are much much higher. Not going to try and put a number on it, but it will hopefully be a declining average as long as I can learn from it and keep on building. I don’t count the cost of my hours and hours of labour, which are of course “priceless”.
L

Just over 3k for a one off Hemlock Eagle. LiteTech construction. 42 pounds. It is the only remaining non wood/canvas canoe in my fleet. 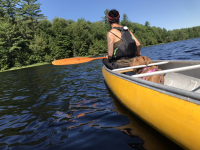 The most I ever paid for a canoe .... around 2000 (US) for a near new 16 foot cruiser from Headwaters Canoe - built off an original Chestnut form. The canoe was in Whitehorse I believe. It was trucked to Wakefield. Then put on a pick up truck and driven to SS Marie by Jamie and Conor Mihell, total shipping was a couple hundred dollars (US). I was headed up to pick up the canoe and COVID hit - borders closed. It sat in Conor's garage for a few months, then his basement .

Eventually I was told if I wanted the canoe I needed an international trucking company with special permit and bill of lading as well as a broker to arrange a deal for me to get the canoe. Once I was given permission to bring it cross the bridge into Michigan I was on my way north. The trucking company had the canoe and the truck x-rayed at the border and had a cable lock placed on his truck he was not allowed to remove until in the US. Conor charged me a case of dried whole milk for the nearly 2 years of canoe rent - I had amazon ship to him.

So - I guess it costs my self and others dearly.

I see a lot of fun no matter what anyone paid or not.. My neighbors bought a pontoon boat. They thought the price was reasonable . Mind you their boat is too large to fit through the culvert between our 3 mile long lake and the system of lakes on the other side of the culvert. Price for pontoon boat $53,000.

I have spent a lot of money on canoes ( currently 12) but not THAT much... and I can go through the culvert. Going to the library is a nice 11 mile round trip paddle.

$1,700 (including sales tax) in 2017 for a used Wenonah Escape from a dealer with a SpringCreek canoe stabilizer (which I sold for $200.) The canoe was in showroom condition. As I pieced the history together, a couple bought the canoe which they found too tippy, bought the stabilizer, still too tippy, so they traded it in for two kayaks. What a tragedy, we lost them to the dark side. 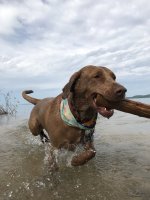 I’ve had a few people ask if that’s what she is, but she’s actually a lab mix

I see, man the head is a dead ringer for a V. Great looking dog, thanks for correcting me.

I agree! And she often comes looks like a chese. The wife had one of the dna tests done and it came back lab/pitt parents and the rest of her bloodline as lab. But who knows

My most expensive boat is my 20' EM White built by Jerry Stelmock at Island Falls. The boat was in like new condition and only on the water a few times. I paid 3600.00 for it. It came with about two thousand dollars worth of stuff, 2 cherry Shaw and Tenney paddles, a never used canoe trailer, a setting pole, a cover for storage and a couple of seat backs. I think it was a pretty good deal for a 6,000 dollar boat, more importantly, I love it.

The real question is how much did you pay per use. I bought my Trillium a couple of years ago and she has been out paddling over 300 times and many miles. I honestly tried to forget the cost but know it was over 3K. I think I better head out for a paddle to bring the average cost per paddle down.

Foxyotter said:
The real question is how much did you pay per use. I bought my Trillium a couple of years ago and she has been out paddling over 300 times and many miles. I honestly tried to forget the cost but know it was over 3K. I think I better head out for a paddle to bring the average cost per paddle down.
Click to expand...

300 sorties in a couple years, that's priceless. What's sad is when a nice boat sits up in the rafters all summer.

I'm pleading the 5th on this one, after my last purchase. That being said, it is still a lot cheaper hobby than motor sports that include purchase price, gasoline, a trailer, insurance, licensing and upkeep.
You must log in or register to reply here.