The most you've ever paid for a canoe (buy or build)

Of the 18 or so paddle crafts I've bought most were bought a long time ago, so the prices would seem low compared to today.

I paid about $3,200 USD for a custom infused carbon/Kevlar seakayak in 1996, and about the same for a custom carbon Hawaian outrigger canoe in 2004.

But since the topic is really CanAm canoes, the most I've paid is about $1,600 for a very lightly used aramid lite Nova Craft Bob Special last year. I say "about" because the $1,900 total price included two new Wenonah carbon bent shaft paddles that retail for $200 apiece. That canoe, however, was bought as a gift for my daughter not for myself.

Fess up. Don't be shy. We won't tell your spouse or the IRS.

30 years ago, I bought a custom built fiberglass canoe from a maker in Upstate NY. But that was so long ago, I don’t think I paid much more than $400 for it.

My current boat is a 13 ft Mohawk. We also have 14 ft Mohawk, Mad River guide, Mad River explorer. Didn’t pay more than a couple hundred for any of those.

I keep thinking I want to buy an ultralight solo OR a pakboat. Can’t quite get the gumption to spend that kind of money,

Have you seen the most recent price jump on Wenonahs? Whew.
M

Have you seen the most recent price jump on Wenonahs? Whew.
Click to expand...

Wenonah did me a big favor, actually. I was about to drive up to Mountainman in Old Forge last week to check out two carbon Prisms they had in stock at $3499 (which I thought was alot) when they upped the price to $4000. That convinced me to keep my old 97 Advantage. Swifts are out my $$ comfort zone now too.

Back in the early 80's I used to pass a canoe shop (Bert Decker Canoe) in Schentady, NY twice a week as a truck driver. There was a nice green Old Town Camper with wood trim in the window calling my name every time I passed by. I managed to save up $800 and my first portage with that canoe was from Bert's shop to my truck parked safley down the road. I got a lot of funny comments from my customers when I opened the trailer door and they saw the new canoe sitting among thier product.
Not long after, I spent $700 on my first wood canvas Chestnut canoe from Schuyler Thomson in Norfolk, Ct.
Those two canoes made a good pair as I explored the ADK's with my sons and friends, 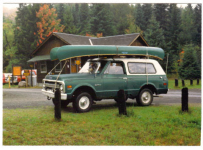 Bert Decker, I had forgotten that name. That’s where the Radisson came from!
A

The first canoe ever bought was a used Bell Magic in Kevlar.Must have been around 2009 or so. I think I paid $1200. It was money very well spent as I put many many miles on that canoe and it introduced me to the joys of solo canoeing.

There have probably been 25 that have passed through my hands since then, all built or bought for less.

About 4 or 5 years ago I purchased my first "new" boat which also happened to be my first solo boat......a Northstar Phoenix in their (then) new IXP layup for $1800.00......all of my canoes prior to this were used aluminum/royalex/fiberglass.....considerably less expensive. FWIW, while at "Canoecopia" this past weekend, I had an opportunity to talk with several of the attending canoe manufacturers and due to rising transportation/materials/labor costs, they were all looking at bout a 20% increase in sales price soon......

Waited till the snow started falling and got a discount on a Wenonah Solo Plus for $2600 - and then got the CCS cover for another $700. And I've used it once.

$3300 for a Loon Works Duet.. And something over $2k for other Loon Works boats. One was sold a few years for more than purchase price. I expect the same for the others.

Bought a new Wenonah Wilderness in rx in 2008 for $1200. Last summer I traded that boat plus $1500 for a paddled-three-times Wilderness in the ultralite layup. Really happy with that trade.

Last week I ordered it...$4,595 for a Swift Prospector 16' Combi in Expedition Kevlar. Spendy, for sure...but I will also be selling an old Royalex boat to offset a little and make some room for it. Oh well - I can think of worse ways to spend money, and I'm very excited for the delivery!
S

The most I've paid so far is $1800.00 and that was for used canoes. I picked up two solo boats, from separate owners, each at that price. At the time, each was about half of the retail value from their respective dealerships.

That's all for now Take care and until next time...be well.

After a down payment of $500 to get on Joe Seliga’s waiting list, I started to squirrel away money for the day my beautiful green cedar and canvas Seliga canoe was ready to come home. Nearly five years later on May 26, 1992, Joe sent me a note that she was ready to leave his shop. I had sent him a total of $1700 US dollars in three installments over the intervening years.
Joe told me he could keep it indefinitely in the attic of his canoe shop, in Ely Minnesota, until I could figure how to get it the roughy 3500 miles to my home in Alaska. Within a few months, I read in the Boundary Waters Journal that the publisher Stu & his family were coming to Fairbanks to race in the limited class sled dog races in March of 1993. I called them to see if they had room on their dog truck to bring a canoe, in exchange for bringing my canoe the could stay with us for the duration of their stay. That sounded good to them, so in late February of 1993 our Seliga canoe started the long ride to Fairbanks.
Since Jerry Stelmok’s book about the Seliga Canoe and then the death of Joe, the cost of one of his boats has jumped to the seven thousand dollar mark. I guess it was a good investment, at the time it seemed like a lavish amount to spend on a canoe.
As a side note, it was in a yellow Joe Seliga Canoe that my future wife and I remember first talking to each other. It was at a YCC Forest Service Camp in the Chippewa National Forest in Minnesota. The canoe belonged to one of the camps guest speakers, he had encouraged me to take it for a cruise around Lydic Lake. I needed a bow paddler, that will be fifty years ago in this coming June.
Last edited: Mar 16, 2022

I think I spent about 1500 bucks building the big freighter canoe. Most strippers that I built probably averaged around 700 bucks. I have only ever bought one new canoe, the Old Town Disco, I got some kind of wild discount, came in around 500 bucks i think. I don't think I can justify 3 or 4 thousand bucks for a ten pound difference. The last Osprey I built came in around 45 pounds, still seems pretty light.

Last year, I purchased my first Kevlar canoe, a blind purchase for a used Northstar. It was used for one season and the serial # and sings reflects that. I paid $1,500 for it and drove from Northern lower MI to just past Ely for it. Had a fun road trip!

I did have some repair work to do, and I added all new decals. Dan at Northstar was a TON of help and sent me replacement rivets. 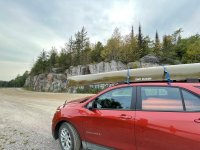 A few years before the NS, I picked up a fiberglass Michigan made canoe from Hoefgen Canoes for $125. Actually happened to buy it from my old art teacher at a summer camp my brother am I went to when were kids. It paddles amazing 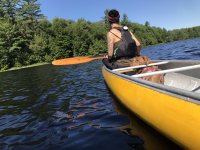 So far, $500 for an Old Town Discovery 164, including two Bending Branches paddles. It was our capacity upgrade from a Great Canadian fiberglass hull so my son and I could start tripping. Now he wants us to get separate solo boats, and I am enjoying the sport enough to spend some "real" money on the next one... Sure would be nice to find a deal like some of those above, though. 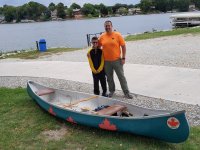 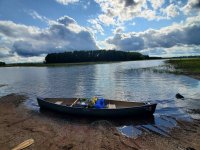 I spent ~US$1300 on a new Royalex Wenonah Champlain in January 2014. Mountainman in Old Forge, NY had it on dead-of-winter special. Royalex boats were starting to get scarce and I wanted a big tandem for rec racing and tripping with my daughter. 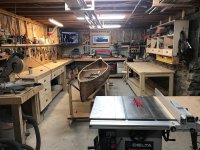 Without a question the most I will have paid on a canoe is the Chestnut Chum restoration currently in progress. I paid $600 for the canoe and I figure when the canoe is completely finished I will be in the ball park of approx $1,200.

Over the years we have bought several new canoes at blem, demo or pro-deal prices, the most expensive in the $800 - $900 range.

The most I have ever paid for a boat was $1000 for a used but pristine Mad River Monarch. The seller was a not a tripper and had replaced it with carbon Rob Roy, dropping two feet and 20lbs of unneeded weight.

The Monarch is no longer pristine, and I wouldn’t take less than 2K for it today.
You must log in or register to reply here.