I've found there are lots of little tricks and tools that can make the process of building a strip canoe easier, simpler, or more enjoyable. It also seems that everyone has their own little way of doing things. Part of the fun is figuring things out as you go but I thought it might make a nice thread to share some of these little tricks and tools.

I'll start with something I wish I would have gotten but didn't and that's some sort of little glue bottle with a long skinny spout or a glue injection needle. Trying to use a full sized glue bottle to apply glue to the edge of the strips was a pain in the butt and much messier than it needed to be, resulting it more work later cleaning up the hull.

And two little tools that I used constantly were a cheap little Stanley plane that I got from the local hardware store and a small block of scrap wood with some rough sandpaper stapled to it. 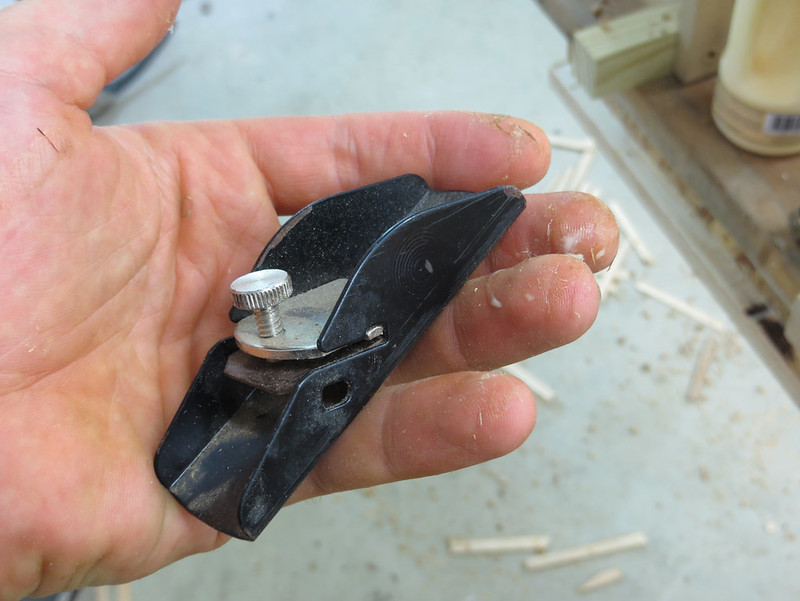 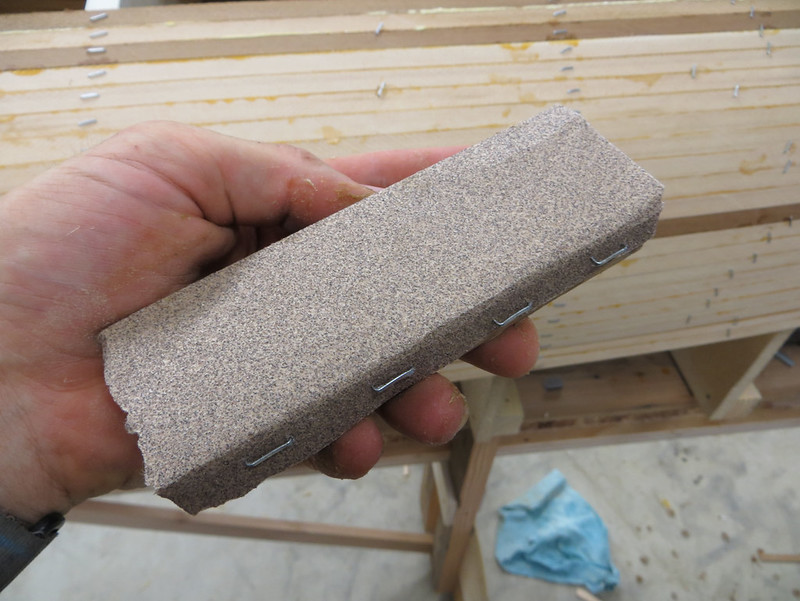 The plane is small enough that I can cup it in the palm of my hand and it's amazing how fast it can remove material once it's sharpened. This is what I used to angle all the strips to fit on the bottom of the hull. Rather than sawing I'd just mark the piece with a pencil and start zipping off material with the plane and checking it for fit as I went. It was easy to adjust the angle on the fly. Angle not shallow enough? No problem, just take a couple extra swipes off the heel. If the edge needed a slight bevel then no problem. I'd slide it back and forth just as fast as my hands could move.

The block of wood and sandpaper found many uses, as you can imagine. If an edge wasn't straight or a little rough after planing or cutting a few swipes with the block took out the kinks. Also handy for final fitting joints or rounding over edges on larger pieces of wood.

We would load up 3 or 4 and have enough to do a couple or three strips at a time. Then just wash them out for the next use. Made it easy to lay a strip of glue in the cove.

I use the same little block plane for fitting the strips along the keel line cut, very handy.
I also have several wood blocks with 36 grit stapled to them, again, very handy.
As for the glue, I just use the 1 qt bottles with built in applicator tip, I don't find it to be too messy. 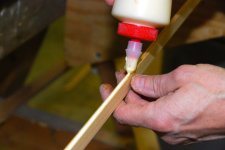 I did buy this nifty sander for fairing the hull 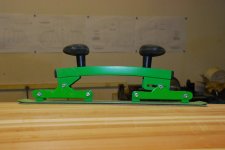 Using hook and loop 36 and 80 grit paper, it made short work of making the hull extremely straight.
A

Nifty sander, where did you pick it up?

My application troubles arose because after the first few strips the strips were no longer vertical so I could never get a straight shot with the glue tip and every time I got to a station it would get knocked off course. I can see where it would be easier to apply it to a strip in your hand.

I use two slotted supports for the strips to hold them cove up while I apply the glue. In the photo, I'm holding the overhanging part of the strip, supports are only about 10 ft apart.
I'll look up the name of the place where I bought the sander...they have all sorts of tooling for fairing big sailboats and the like. They even have 6 ft wide squeegees!!

Alan,
I just checked the name of the sander...Flexicat
You must log in or register to reply here.

Experimental Plug for a mini-Merlin
2 3