Show us pictures of your canoe vehicle with boat(s)

Let's see pictures of your canoe vehicle, current or former or both, with a boat on it or near it -- canoe, kayak, raft, I don't care. If you have a camper, we'd like to see it, too, and hear about it's details.

This is my 1997 Dodge B2500 van conversion, AKA the magic bus, which gets about 10 gallons per mile. I took out the middle two captains chairs so there is a big open space between the front seats and the rear sleep sofa, covered by an oriental rug. I've slept in it all over North America in campgrounds, back roads, Walmart and church parking lots, truck stops, interstate rest stops, and suburban streets. I keep all my canoe and camping gear and clothes in it all year round, and during the warm months I usually leave one or two boats on top. Just hop in it and go for two hours or two months

The picture was taken about 13 years ago when everything was much newer, including me. On top is a 2004 Huki V1B solo outrigger canoe (va'a, in Hawaiian), a 1996 Surge Marine Surge seakayak (infused with gold flecks in clear resin), and a 1986 Mike Galt Lotus Caper solo canoe. 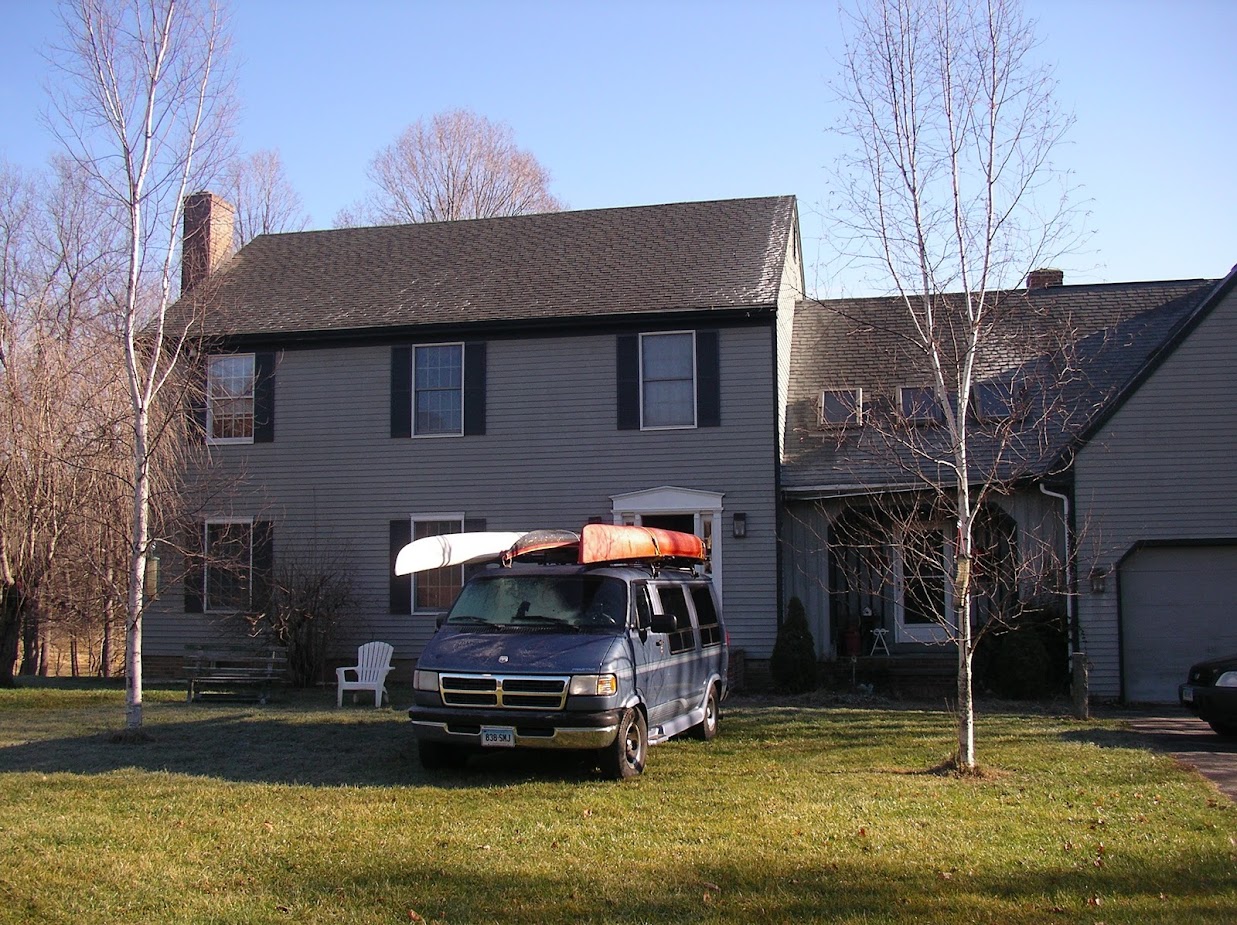 I can fit 3 full size tripping canoe all the gear for as long as we need and 6 people. The rig does 22miles a gallon on average.... Hard to find a better shuttle vehicle!! 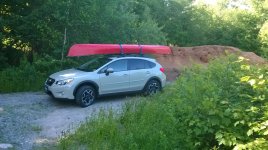 This is my '15 Crosstrek with my Rx Wilderness on it, when the car was one day old. I picked it up on a Friday and had to leave town for a long trip the following Sunday, so I felt like I should baptize it with a few drops of pond scum on Saturday. Begin as you mean to go on. (This put in has several large piles of sawdust -- I guess it's biodegradable, eventually.)

I love full size vans. If you Could get one with 4 wheel drive they would be the ultimate canoe tripping vehicle!
M

Shared before: on the way back from Bowron Lakes Provincial Park in British Columbia. 2003 Tacoma. (I really wish I had photos of my 1963 Ford Falcon we drove from SC to the Allagash, with my brother's 14 foot aluminum canoe on top!) 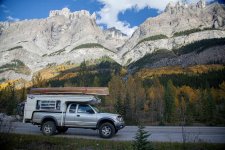 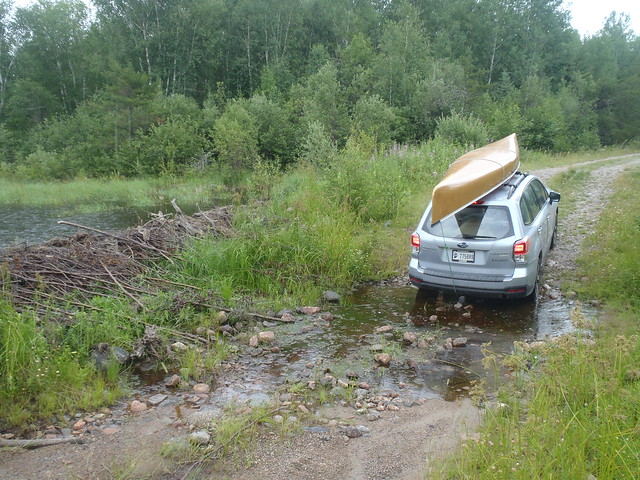 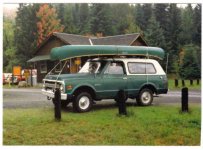 Flagstaff Lake, Maine, a few days after ice out with the wall tent/wood stove. 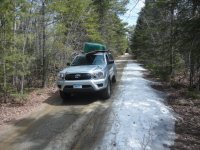 Home made racks, thanks to Jim Dodd for the idea. 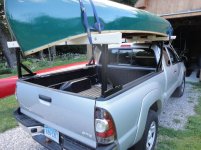 With all these macho SUVs and trucks being posted by you guys, I'm a bit embarrassed by my conveyance. 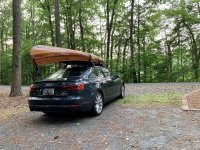 Getting ready to launch at the St. Regis Canoe area on a solo trip.

2000 Chevy extended cab pickup with 4.8 liter 8 cylinder engine and 5 speed manual transmission. We bought it new (never again!) and still have it. 323,000 miles now and have never needed to add any oil! For over 10 years Karen and I'd head out for a couple weeks every summer with our 3 kids. 2 boats on top, up to 5 bikes across the bed rails and our camping stuff in the bed. Good times! 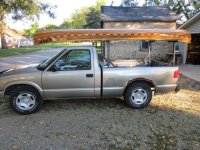 Lake Marion, South Carolina, at the Santee Indian Mound and remains of Fort Watson, which Frances Marion (the "Swamp Fox") and Henry "Light Horse Harry" Lee captured from the British in 1781. South Carolina is a wonderful state for paddling rivers, huge swamps, lakes, estuaries and ocean. 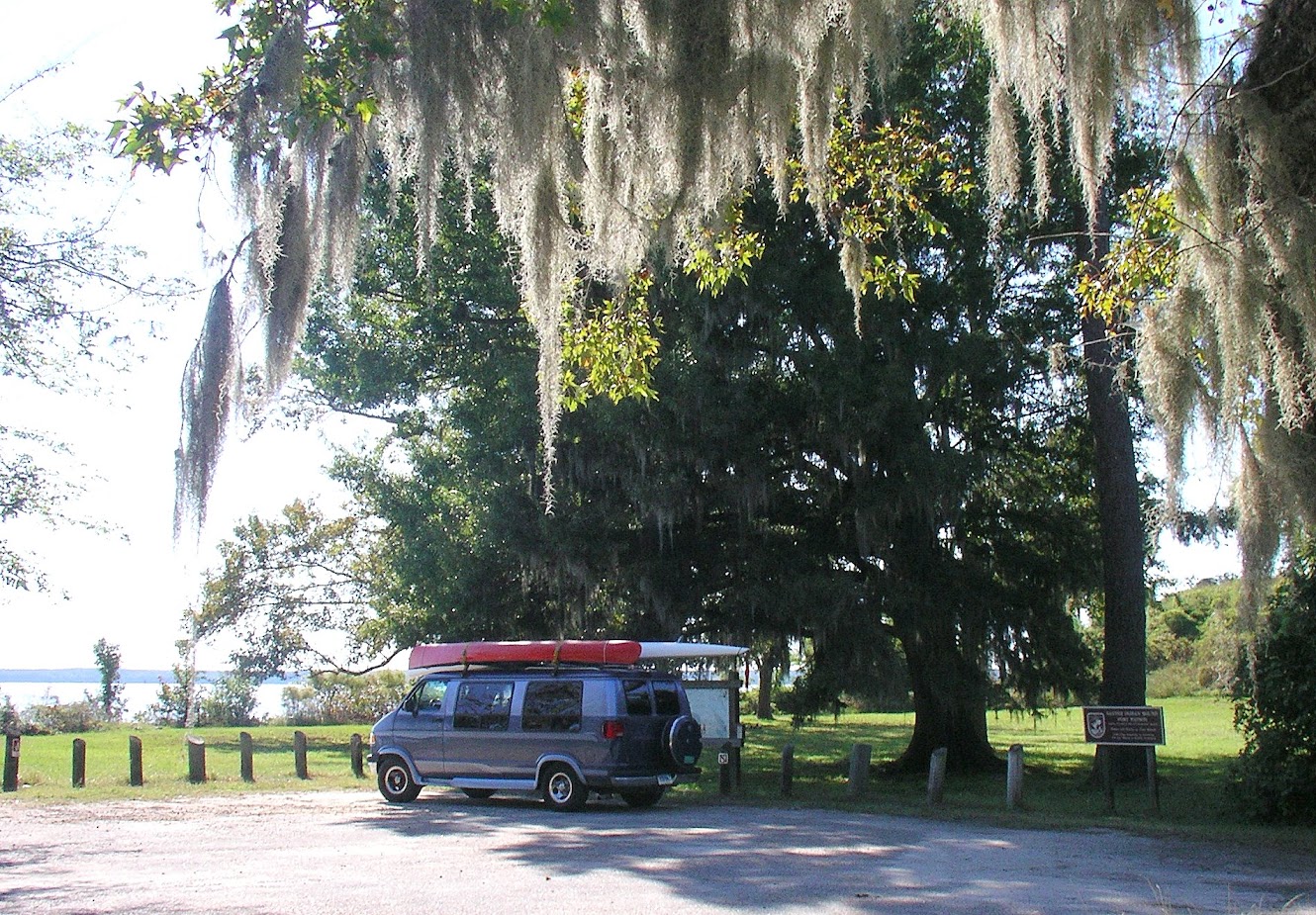 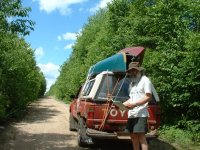 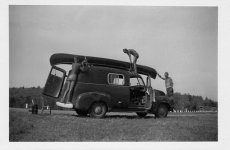 1955, location unknown, that's my mother on the roof, my father on the front bumper and my older brother on the rear bumper. I'm not sure who took the picture but I would have been in a basket on the ground oblivious to all. 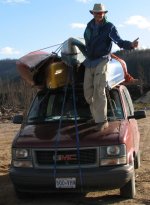 Henry Ford.....the mighty Buick....and the two at a time Toyota. All over Manitoba.

This is a project boat, new paint, varnish and retained the seats. Pic taken just before I tied it down. 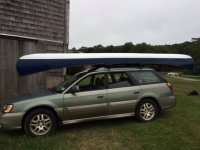 Many boats were carried on that Outback. Boats towed and spars tied on the roof.
Jim

In my hotel parking lot in fairbanks, after taking this 34' carbon fiber voyageur canoe on the 1000 mile Yukon River canoe race. 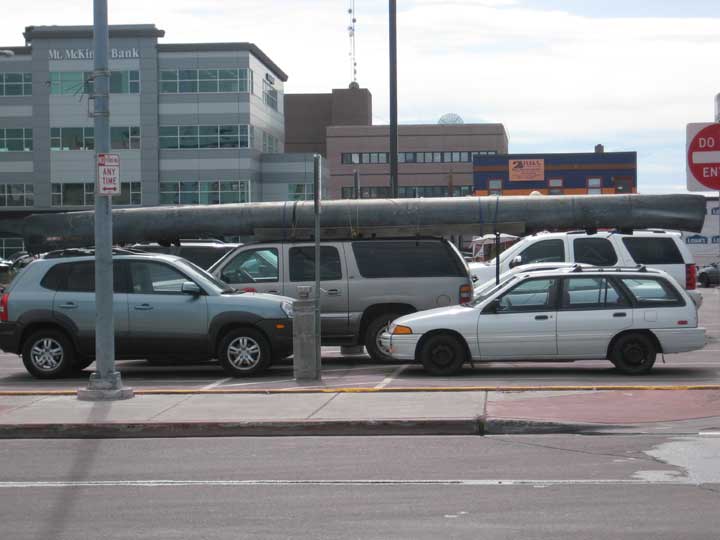 Another year, with a 28' cedar strip voyageur parked on top of the "dome", above Dawson City, YT with theYukon River in the background. 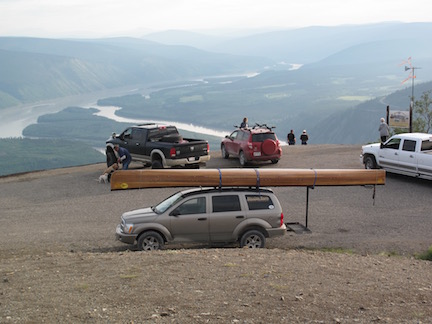 Yet another year with a 23' carbon C4 canoe on the way to the Yukon on a Subaru making my across Canada, at the giant coke can tower in the appropriately named city of Portage la Prairie. 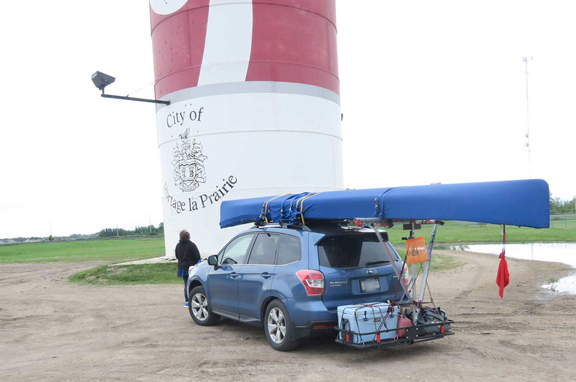 Paddling and cartopping an outrigger canoe