In a recent thread we discussed setting up a tarp quickly to escape sudden rain showers.

A few years ago, a friend gave me a bunch of CamJams that I rig on a long piece of paracord.

I keep several of these attached to the tarp grommets and I can quickly attach the tarp to surrounding trees by a timber hitch and tighten as needed at the CamJam.

When taking the tarp down, I leave the CamJam in the grommet and throw the sord tails in to mid-tarp and roll up the tarp for packing.

One of the more useful new gadgets out there IMO.

Pre-installed ridgeline with prussic knots. Tie-outs with tautline hitch and Siberian hitch at the tarp. No fuss, no muss

Same as Sweetfancymoses, but with the addition of a ridgeline stuff bag. Essentially just a stuff sack with a grommet at the bottom. One side of the ridgeline rope goes through that grommet, with a length of line, prussic and clip bundled outside the bag. The other end of the ridgeline and prussic/clip can get stuffed inside at the top during storage.

Setting the tarp up solo becomes a snap. Remove the inside ridgeline and tie the ropes at the desired height between trees, with the tarp still in stuff bag suspended in the middle. Open the bag, pull out the tarp and adjust the prussics/clips as desired and stake out guylines. When the tarp is up the stuff bag stays on the ridgeline at one end.

The stuff bag keeps the tarp off the ground and out from underfoot, and is way much easier if windy.

Packing up just reverse the process, undo the prussic clips, slid the bag and half of the tarp to the middle of the ridgeline, and stuff the tarp inside the bag before taking the lines down. The tarp need never touch the ground.

CCS sells a well designed ridgeline stuff bag, sil-nylon for easy stuffing, with two cinch cords, one cinch for compacted storage, one for looser stuffing while at home. 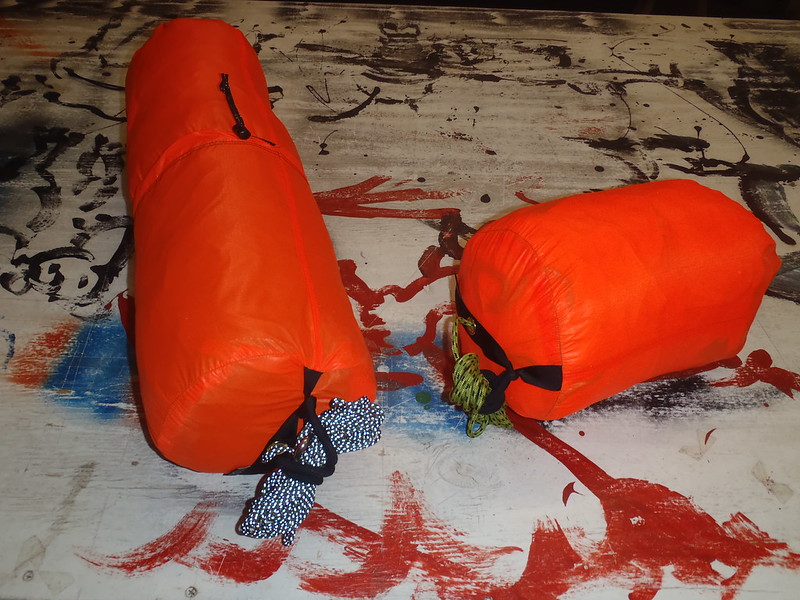 We have those for two large tarps, and while I prefer them to our DIY ridgeline stuff bags (the sil-nylon facilitates easy stuffing), sticking a grommet on the bottom of an old stuff bag, or even an old camp chair bag is easy enough. 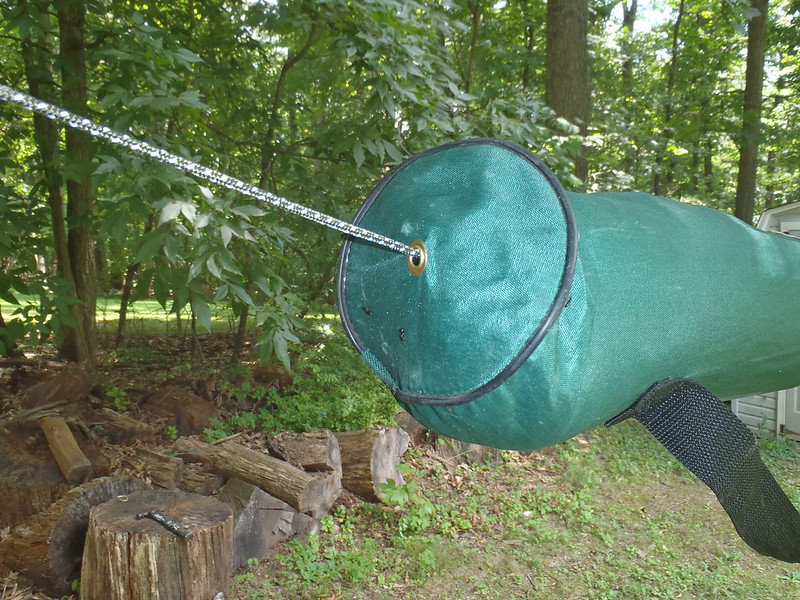 Mike- that’s brilliant. I’m a bit annoyed this never crossed my mind. Thanks for sharing!

Dan Cooke’s brilliance. Such a simple and seemingly obvious idea. A ridgeline stuff bag makes setting up a tarp, especially solo, much faster and easier. Taking one down (re-stuffed) too.

I’ve seen his and have a tarp with a pre-rigged ridge line, but never thought to put a grommet in the stuff sack. Clever.

I first saw it here. thanks to HOOP.