REPORT ON THE POST-MIGRATION FUND RAISER

The median donation was $25.00. That would not have been enough to support the site, which formerly required at least $2,000 per year, unless there were at least 80 contributors, which I doubt we've ever had. However, as detailed below, it is highly unlikely that we will require $2,000 per year anymore.

51 donations were via PayPal and 14 were via check.

Of the PayPal donations, 33 were sent via the default Goods & Services option, which charged me a fee, and 18 were sent via the Friends and Family option, which presumably charges the contributor a fee. The Goods & Services fees charged to me varied from 3.5% to 10.5% of the donated amount, with the percentage increasing as the donation decreased. The fees totaled about $68.00.

Many members sent me very nice notes of thanks in their PayPal transactions or in their envelopes. That made my migration efforts very worthwhile. I even got some gifts. Just as examples, 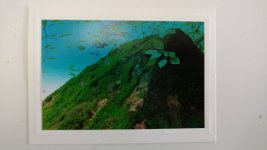 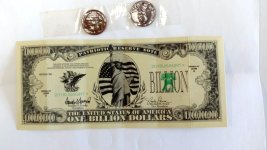 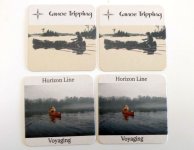 LanceR sent a t-shirt that he posted about in another thread: 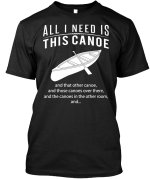 Again, thanks to all the contributors for a very successful and rewarding fund raiser. Which leads me to report on the current . . .

STATE OF THE SITE

I believe the site is in the strongest technical and financial position it has ever been in.

There have been no complaints about bugs, log-on problems or technical issues inherent to the Xenforo platform. None! Some minor issues arose as an inevitable result of the migration process because of vBulletin corruptions, but I have managed to resolve almost all of those working with the affected members.

Virtually all the feedback I have received about Xenforo has been to the effect that it is superior to vBulletin.

As to yearly costs, I have reduced every annual cost as follows:

- Software update license fee reduced from $209 for vBulletin (which included only one month of ticket support) to $65 for Xenforo (which includes 12 months support).

- Web hosting fee reduced from $1,296 at Siteground to $421 at Driven 2 (which includes Xenforo and server support).

- Spam scanner fee reduced from $20 at Siteground to $0, because spam scanning is built into Xenforo.

- Domain name ("canoetripping.net") registrar fee reduced from $20 at Siteground to $12 at Namesilo.

- IT bug fixing costs reduced from $500-$1,000+ under vBulletin to hopefully $0 under Xenforo, because Xenforo is very stable and bug free and because we get service included in our license and web hosting fees paid to Xenforo and Driven 2.

Thus, I hope to be able to run the site for about $500 per year and use any custom IT fees to pay, not for bug fixes, but for site enhancements such as the forum restructuring, logo changes, and new site color themes that already have been implemented and paid for.

- the Xenforo base and XFES licenses are paid up through August 2022;

- the Namesilo registrar fees are paid up through July 2023; and

. . . we have something over $2,000 remaining in the kitty. Hence, I don't anticipate the need for another fund raiser for about two years.

HOWEVER, WHAT WE DO NEED NOW

Is more user participation, thread starters and posters. We have registered 104 new members since the migrated site went live on August 31, but very few of those new members have posted.

We are averaging about 95 active users per day, which means people who view the site and click on some link to read or post something. Folks like to read our vast archives, but we must keep building them with new threads. You don't have compose a thread about a big trip or a boat build to attract discussion. Sometimes, the smallest or most mundane topic will provoke interest.

All in all, I'm very optimistic about the future of the site. We rank at or near the top in most internet searches related to canoeing. I think we have the best software platform and richest set of forum topics. And the best community of members.

Said it before, but deserves restating….many thanks Glenn. You have done well to say the least!

Excellent report, Glenn. It seems that our future is very rosy, thanks to you.

I note that you refer to the “median” donation. Perhaps not everyone knows, or cares, that in a Normal (i.e. Bell Curve) Distribution, that the Mean (i. e. Average), Median and Mode are all equal to each other. In our case, the Average exceeded the Median of $25, which indicates that the distribution of donations was not a Normal Distribution. Our Median does tell us, though, that half of the donations were above $25, and half were below this amount. Is this relevant, or even interesting? Likely not, but I’m killing time while Kathleen is preparing supper. I probably shouldn’t ask what the Modal ( i.e. most common) donation was.
Last edited: Nov 18, 2021

PaddlingPitt said:
I probably shouldn’t ask what the Modal ( i.e. most common) donation was.
Click to expand...

Sometimes in life you get rewarded for things you shouldn't ask for.

Ignoring the PayPal fees, the modal donation was a tie between $50 and $25. There were 18 donations of each of those amounts.

Ah. Bi-modal. Interesting. I’m guessing that there were not very many donations between $25 and $50.

PaddlingPitt said:
Excellent report, Glenn. It seems that our future is very rosy, thanks to you.

I note that you refer to the “median” donation. Perhaps not everyone knows, or cares, that in a Normal (i.e. Bell Curve) Distribution, that the Mean (i. e. Average), Median and Mode are all equal to each other. In our case, the Average exceeded the Median of $25, which indicates that the distribution of donations was not a Normal Distribution. ....
Click to expand...

So when people tell us we're skewed, we'll have to agree.

Thank you for the transparent report and full disclosure. Much appreciated as is all your work over the last months.

Thanks Glenn, great news. A lot of good information in your report, and to raise that much money so soon after a previous fund raiser speaks to your very clear and informative messages about the condition of the site and your plans to fix it.
To those who stepped up with the 3 figure donations I lift my old beavertail paddle high in the air! Having been involved in a few past fund raisers I think I know their names and I for one Thank them wholeheartedly for their continued generous support.
You must log in or register to reply here.

Problem, Issue and Solution Threads Prior to the August 2021 Site Migration

Site Migration and Reorganization are Done: We're Back!

Alternatives for this site's future
2 3 4