Thought I'd post a few notes and pictures from this past weekend's overnight paddle trip. Around here, the quick water doesn't freeze over so if you're dressed for it, there's never any reason to live by traditional paddling seasons. While I mostly paddle the bigger whitewater rivers this time of year, the weather provided a chance to paddle the Little Juniata River near Spruce Creek in Central PA. The river follows a two lane road on and off for about 50% of the section I did. The other 50% is in the woodscape with a minor section past a rural farm. The water level was about 3.75' which gives a wide range of rapids from Class I through Class II.
The weather had been cold and Saturday was about 20F. and probably 18F with the wind. It was overcast and started to lightly snow about halfway to the campsite and never really stopped until Sunday.


At the takeout, the 16' boat is a bit too big for the Rav4. My Tacoma is behind it and that is my main truck, but my wife was running shuttle for me. 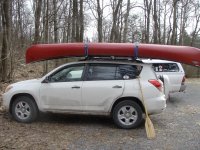 The camp is in a gorge. It was difficult to land the boat due to the level and the frozen, icy embankments. The first thing was to change from my soaking wet neoprene booties and socks to dry socks and hiking boots. I took on some water and my feet were swimming in thick slush. Then I set up my tent to get my blood flowing before setting out for fire wood. The snow was light and fine and slid off my tent to bury the perimeter. 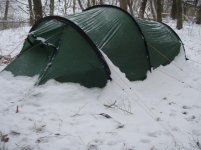 It stayed cold but I had a decent fire well into the night and made two lobster tails and a 20oz steak using a Purcell trench grill. It worked well despite the cold. I washed it down with a beer and then sipped some whiskey occassionally. My brother had arrived right at dark by hiking in from the takeout so we fire gazed through the night.

The next morning my brother headed out and I finished packing up and headed out myself. The red canoe was covered in snow when I found it. The second half of this short trip doesn't have as many rapids, but it is more scenic than than the first. 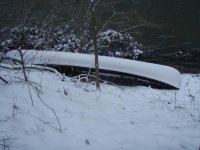 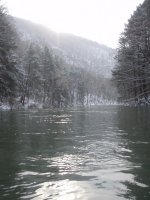 My dog has a bad habit of standing on the seat when there are rapids. We just came through some rapids and I was able to let go of the paddle for pic. In bigger rapids, she has been known to be thrown overboard when standing up like this but she's a stubborn Chessie. Other than this though she's a great tripping dog. 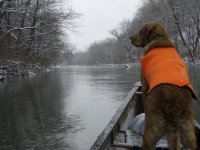 This is the last of the section I did for the weekend. It never got above 20F and the wind was constant with intermittent snow. At the this level, you go on and on with different takeouts to extend the paddle, but I figured this was enough for my first canoe paddle in nearly a month and having to get home and tidy up the gear and start thinking about work on Monday.

That's it, thought this might be a good way to practice with pictures and all before I start some other trip reports from the past and future. I also have a lot of different gear that I use different times. I really like some of the items and will try to share some reviews of my favorites sometime.

Very nice report! I enjoyed your pics especially your dog in the bow of the boat.

Appreciate the post! Any trip reports this time of the year are great for us folks stuck away from canoe country...

Waterdog said:
It stayed cold but I had a decent fire well into the night and made two lobster tails and a 20oz steak using a Purcell trench grill.
Click to expand...

That is a big dog....I have two labs that we got as pups, brothers. I have never tried to put them in a canoe yet, but maybe this year. All my other dogs where female labs and they where great in the canoe. These guys I have now get too excited when they see water.

Thanks for sharing your trip, I have that small wall tent and stove and it got me thinking.

What kind of tent is that?

I too have a dog that stand up in rapids!! A Golden..her two best friends are a lab and a Chessie.. I guess if you go over your dog will rescue you. In canoe class we had an instructor bring his Chessie..she kept trying to rescue students in rescue class!

Never above 20F..now you are a real paddler!

Awesome...that was a great report!
R

I liked your trip, report looked like a real test of your gear, lobster to boot. great!!

Thanks. looks like a great trip... however, i shudder to think of how cold that water is... my local water is probably still about 50*, and will be swimmable by April, maybe even late March if the weather keeps up (warm winter.) Funny about your dog... maybe she likes to see what all the noise is about!

You are one tough hombre, Barry. I especially liked the part about the steak and lobster and sharing the fire with your brother.

Thanks for the comments all. Some of the Members here from up North have some much nicer canoeing waters than we have locally, but our rivers very rarely freeze. If you're dressed for it and equipped for it it's no big deal....don't flip over though. Note, only my feet were cold and that was because I was wearing the same booties and socks I wear when I white water kayak. In this case though they were wet with slush in the bottom of my open canoe.

I was hoping to post some shots from my GoPro through the rapids, but alas it bit the dust this trip, thus the lack of pics. I forgot to put the water proof door on the case before heading out and it got soaked through. The door that was on it had big holes for better audio as my sister in law used it last to do a video resume.....she landed a really good job so I might have to hit here up for a new camera...kind of spin it like it was her fault. HA!

Most of my trips are up North and require portages, so anytime I don't have to carry anything, I bring a steak and lobster tail. The Purcell Trench Grill is really easy to use and split lobster tails are easy over flame.

Robin, the tent is my cold weather camping tent. It is a Hilleberg Nallo 3 GT. It is gigantic but only weighs about 5.5lbs. I take it snowshoeing in the ADK, and use it whenever the temps will be about 30F. or less. It is a nice tent for snow conditions. I often look at those Snow Trekker tents and similar styles, but they are of no use where I live. You would have to pack it on your back as there is no way to use a sled in the mountains around here. I'm thinking about a Winter trip to BWCA this year and will definitely be renting a hot tent set up for that though. With my big ole dog, I've never been cold in that Hilleberg tent, even at -10 in the ADK.

Copper likes to stand up anytime the boat gets to rocking hard, either rapids or big lake rollers in a stiff wind. I'm pretty comfortable with it though. On most trips, she is content to lay on the bottom of the canoe after a couple portages.

Barry
You must log in or register to reply here.

Worst medical situation you've had on a canoe trip
2