Well I bumped into some info on tick borne diseases, pretty grim stuff. So last summer I sprayed my tent and clothing with 0.5% Sawyers. I couldn't really tell if it worked or not but I felt better. Now bear with me; the window in my little shop seems to attract all kinds of flying bugs and the usual spiders in their wake. I hate reaching for something off the window sill and have a huge spider scuttle across my hand along with the entangling spider webs. Ugh! So anyways, I sprayed the window frame with some Sawyers premethrin I had left. Wow! There ain't nobody of an insect nature left alive. And that's still working months later! From what I read, if you let it dry before you wear or use the clothing or gear it's harmless for humans and dogs. Got to keep it away from cats and ponds etc.
I found the Sawyers preparation a little spendy so I ordered a gallon of the stuff from Gemplers; same dose but in bulk for ag. usage.
A whole bunch cheaper.
Now, do any of you use permethrin and how did it work out? Of course I'm interested in anything you've got to say but if something about it wasn't too good that would be especially interesting.
Ain't no flies on me!
Rob

When I worked in outdoor wildrness therapy for adjuicated young adults we would spend anywhere from 21 days to 5 months out doors in a national forest ... deep in the bush. Every night we had a tick check. After a few years, we started to treat the outer clothing with Premethrin. We would spray in on and let it dry. After it is dry it is ok to ahve on clothing. The amount of ticks found during tick checks was almost non existent. That stuff works excellently.

I used it on a couple of items last year. Don't know if it worked well or not. I can't afford to spray every article of clothing I have, nor the front porch of the house with permethrin. I figure the spiders are there for a reason; to catch blackflies and mosquitoes. They are also indicators of drafts so if you have spiderwebs concentrated inside look for air leaks in your structure.

I live in the woods on a lake, and just have to learn to live with ticks and blackflies and no seeums and mosquitoes. To be completely protected even with snow on the ground, I would have to spray my winter wardrobe too. The dog is already bringing in ticks when her monthly Frontline dose is at the months end.

My approach is to do a manual check.. Even back in Connecticut (the birthplace of Lyme disease) it became apparent that we were not going to spend the summer mowing lawns in long sleeved shirts and long pants and pants tucked into socks so living near Lyme we got into the habit of noticing things on us.
Last edited: Feb 15, 2013

I sure wish premethrin clothing or spray could be purchased in Canada - and don't have a clue why not.
I can buy big doses in garden centres but I haven't a clue how much to use in a pail of water and I'm leery about experimenting with stuff that will be next to my skin or mosquito net.
You need to click on the pic to get a real look at the mess on my anke. The other one was just the same. 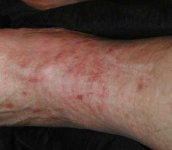 From what I read the difficulty with the garden store agricultural permethrin is the solvents are different. You just can't dilute to 0.5 percent the stuff you buy at the garden centers.

I might suggest a trip to WalMart in Ogdensburg NY for Sawyer Permethrin. While you are in Canada, you are not really deep in there.

Here is kind of a fun article on DEET vs Permethrin

I am going back to the Everglades in three weeks..just added some Sawyers to my shopping list for those horrific no seeums they have..yes I have to go to Wal Mart anyway. I would mail you some Shearwater but I bet it would not get through.

Many thanks, YC. That article had some great info.
Ted
O

Hi Shearwater, The rate of dilution for use on clothing is 0.5%; visiting the Sawyer web site it seems that the premethrin actually bonds to the fabric of the clothing. My gallon jug, made by Total Solutions of Milwaukee WI is also 0.5% the rest (99.5%) is listed as inert ingredients. On the label they talk about using it outside and inside. I'm guessing but I doubt if the solvent would have any oils in it given that they are using it on rugs and beds for lice and bedbugs. They do say to not spray it on food and kitchen surfaces. Pretty basic common sense but I guess they have to say it.
Last summer I hung my camping clothing on hangers and sprayed them outside, left them for three days to be sure they were dry. Afterwards I couldn't tell that anything was on them, nothing gummy or sticky.
I don't know if it's really important or not but folks talk about "repellent"; this permethrin as I understand it isn't a repellent it just kills them. And given that we are told many times not to put it on the skin, maybe you might want to get some real repellent for the exposed skin surfaces.
I got my large and cheap jug of permethrin from Gemplers.com , they will know if it can be shipped to Canada.
The Sawyer people have a great web site that explains just about everything.
Sorry about your ankles, that looked awful.
Rob

The Sawyers at WalMart is $9.88 for a bottle that treats one shirt, one pair of trousers and two sox. That is pretty steep.

I was given a can of permethrin spray in 1992, on my way to Somalia, by the USMC unit with which i was deploying (not my organic Army unit.) The Marines had plenty of experience and i watched and learned. the spray can treated two sets of BDUs, my hat, my jungle boots, and my mosquito netting. It worked great, and i became a believer. it is NOT a repellent. it kills the little buggers.

I generally buy 3 cans a year and re-treat my stuff in the spring. i think mine runs about $7.50-$8 at my local walmart. i live in LA, so it's pretty buggy all year round. about once every 7 years, we get a good hard winter that kills 'em off, but not normally. i hang my pants, shirt, 3 pairs of wool socks, hiking shoes, and tilley hat on the fence and spray them good. since they all get washed regularly, or wet (or both), i retreat every couple months, mostly the hat and boots. i also hang my hammock and spray it once a year, including the tie out lines and mosquito netting.

my daughter (who is too cool to wear a hat) frequently asks me why the bugs don't bite me. i give her my "magic hat" for awhile, then take it back. she recognizes the difference and puts her own (permethrin treated) hat on again.

the stuff works. it is highly toxic to fish, reptiles, amphibeans, and cats. some cats have died simply by contacting dogs who'd been treated for ticks with the stuff by their owners. i lock my cat up indoors when i use it, and while it's drying.

You can buy an agricultural-grade jug at Tractor Supply Company ($15?) and dilute it yourself as well, then put it in a spray bottle, but i've never needed the 25 gallons or whatever it would make for my own use. it's mostly for treating a herd of cattle or horses. but it would be cheaper in the long run, and as far as i can tell, it's the same stuff (just not sure how it stays on an animal... unless you're treating the fur, and it dries on, and stays put for a week or two, like in your clothes.) btw, the spray can says to re-treat after two launderings.
O

My gallon cost $25.20 the shipping is one of those deals where you pay a blanket charge for a year; I forget, somewhere around $40??? Given that I buy all kinds of stuff from them in my opinion it's a real deal. I just wish they sold canoes!
Not to beat a dead horse but that gallon needs no dilution; apply just as is.
Best Wishes, Rob

So to sum up. Sawyer at WalMart or online ( I note that online the soak application is cheaper)
Rob cited Total Solutions of Milwaukee
Tractor Supply Company I see the Permethrin is ten percent so it has to be cut in half with...what solvent? Seeker what did you dilute it with? I guess that is the big question.
O

Actually Y.C. depending on the solvent (I'm guessing water) and depending on the price, that Tractor Supply Company might be the best deal given that you hope to wind up with a dilution of one half of one percent. I'm going to get cross-eyed or get the hick-ups trying to figure that one out!
10% in half is 5%, 5% in half is 2.5%, 2.5% in half is 1.25%, 1.25% in half is .625% now were darn close, where's the sandpaper?
I claim geriatric distress and will stay with my gallon jug.
Well, I'll be safe from bugs for sure but probably get hit on the head with lightening!
Rob

i only saw it at TSC... i never did buy any, and barely read the label after i saw that the container make a bunch. i didn't need that much. as far as i know, you dilute it with water. i did a few years as a volunteer for a hippotherapy (horses and handicapped folks) charity, and we used to get some sort of equine insect repellent (not permethrin... milky white stuff) in gallons, and we'd water it down... couple ounces in a spray bottle, topped off with water... i kinda figure the permetrin was the same. it didn't mention any special solvent, and farmers demand simplicity. sorry. while my aural memory is worse than my visual, i wasn't alll that interested in the stuff, and therefore didn't take a hard look at it. if you go there (a feed store of any sort would probably have it too), they're generally friendly and knowledgeable.

The only reason I asked (seeker and OM) is that we have a new TSC in a cornfield near here. Or snowfield. Its in an odd place and actually has a LOT of tractors and farm stuff for Maine. I need a shopping hunting excuse to go there. From what you mention I better bring my reading glasses. I ain't any younger than you.
G