Well, I purchased an Old Town Pack canoe from a lady on Craigslist last fall for $250. When I drove out to Connecticut the boat was in decent shape. It did need some work though. The seat was full of drill holes, hangars were removed and PVC pipe added, dents in the hull up on the stem (looked like it was flipped upside down in a pick up truck bed and ratchet strapped in denting the stem on both sides), and some rub through on the keel from dragging on shore. 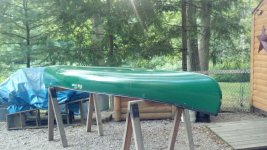 I knew what to do about the seat, the dents, and the worn out keel and did so (kevlar skids, and Gflex epoxy along with new seat and thwart)

I also fashioned a spray cover bow and stern

what I didn't know what do do was stop the oil canning that so many complain about with this little craft.

I searched the web for ever trying to find ideas on what to do about it and found pretty much one option. I can't remember where so no credit can be given and I can't find it again anywhere but I do know it was on a fishing website. That option was to take a hardwood dowel and run it the length of the canoe, add a couple extra thwarts, and brace the dowel down from said thwarts. I didn't want to add too much weight so I only braced from the seat and one thwart. Didn't work. Not enough support for my 220lbs plus gear.

So I was standing in my shed in the yard drinking a Magic Hat#9 when it hit me! Steam in some oak ribs, 8 might do it and only add roughly 3 pounds!

I broke out the measuring tape and started cutting roughly 3/16" ribs from a plank of white oak I had lying around and unpacked my DIY steam box made from gorrilla tape, a piece of 12" long 2" PVC, coleman stove, old pot, and a box fashioned from 1/2" styrofoam board insulation. I steamed up 8 ribs and jammed them in.

After they set up for a couple days I put a saturation coat of Systems Three epoxy on the ribs (left over from a Pygmy kayak kit build I did a couple years ago) then sanded the bottoms after it cured.

On to the boat. 100grit sandpaper where I marked out the rib locations, clean with acetone, the pass a torch flame over the areas to be glued. (I read that this changes the chemical make-up allowing for better adhesion)

Then I applied GFlex epoxy from West Marine onto the canoe and stuck the ribs back in.

After the epoxy set up I went back a couple days later and used more GFlex which was thickened to what I would say was a plummers putty thickness and filled in the gaps along the sides.

I still have some flex in the hull, which is probably good for bouncing off rocks and such but the oil canning is pretty much non-existant!

I also threw together some yoke pads and working on a solo yoke system based on what I saw here:

Here is a link to picasa with some photos, I guess I should have taken more.

Sorry the pics are so BIG! I'm half a moron trying to figure out how to simply add them, not to mention how to shrink them!!
Any advice?
Last edited: Mar 27, 2013

Hi Jason,
Nice restoration story, sounds like your a wood canoe type guy in denial, steaming and bending ribs, YAHOO!..just kiddin', tried to see the pictures but I get something from google wanting my profile filled out.
Thanks, Robin

If i can figure it out I will try to post some pics in the thread.

YES I AM!! a wood canoe guy. Just dont have the space or more importantly the permission from my wife "Going in the garage AGAIN!!????"
When I was putting together a SOF (airolite arrow) I never heard the end of it! Or when I put together the Pygmy kits... I'm an addict.. when I start a boat project I never leave the garage.

BTW.. I very much enjoy reading your posts! I must live vicariously through your stories, and stripperguy, and so on so on....

This is great. enjoyed very much. What else have you done?

cflcanoe said:
This is great. enjoyed very much. What else have you done?
Click to expand...

Well I dabble alot. I am by no means a perfectionist but I have put together three kit kayaks from Pygmy boats, tried my hand at a SOF canoe (Plat monfords design) and I have also sewn up my current sleeping system which is a hammock and under quilt. Thanks to all on Hammockforums.net for that.. Great folks over there .

Mostly, I try do get out there the best I can with what I have. Of course playing with my gear really helps the withdrawal from not being out there! 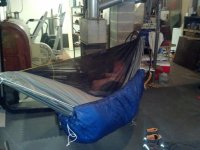 This is a hammock setup I made my father. Here he is relaxing in it

Here is another link to picasa on my airolite arrow build 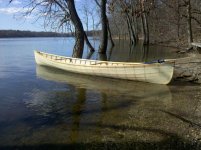 Jason,
Did you build the Arrow from plans or a kit? What was the weight of the finished canoe? Looks great.
Dave

Dave, thanks. I ordered the plans from gaboats.com

They sent me the fabric, kevlar roving, some epoxy, and a pattern and plans. They call it a kit. The user does everything else. It was my first shot at it. I never had any instruction or experience with this type of building. It turned out OK I did mess it up a little (shaved off a little too much on two of the forms which caused a little waviness). It came in at 23-24lbs. Could have been lighter but all I could obtain was white oak for the ribs. No ash available here in Long Island.

Hi Jason,
Again, I think your ideas and finished product are great, I need to get some of that Magic Hat. That spay cover from what I can see looks like a great DIY finished product, I like that rod holder too.

Condon Lumber (http://www.condonlumber.net/) in White Plains, NY, just off the Cross Weschester carries ash in 18-20 ft lengths if you ever need some. Plus plenty of shorter lengths, just call first for current availability. I have found some great clear 1" x 10" clear gunnel material there.

Any chance hearing more about that spray cover you made?

How does that seat mounted portage yoke work? Never saw one like that. I like those shoulder pads you made, that's been my mainstay for a while, I find them comfortable.

The spray deck is made from 1.9oz sylnylon. I taped clear, light painters plastic over the gunwales and traced out the inner and outer edges of the gunwales. I also traced out where the support would be (have since switched out the orange plastic for oak) and traced the seat and thwart. This gives you a basic pattern. I then cut out the silnylon to match allowing extra for a double rolled hem all around.

Next, I taped the new cover to the boat and check for fit and marked where the straps would be. On this boat I already had drilled holes every 6" and ran rope all around the perimeter. I decided to use this as the attachment point for the cover.

I sewed on plain velcro (military BDU patch kit, Army don't sew on patches anymore, it's Velcro) where I had previously marked on the cover and sewed together 2 1/2" wide straps that wrap under the perimeter line and back over the top of the cover and stick down. So far so good. I'll try to post pics but I'm on mobile at the moment. My daughter is on cpu doing homework (yeah, priorities right?) 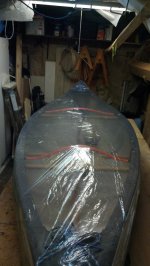 Trace gunwale and seat and support 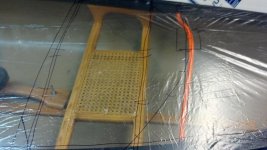 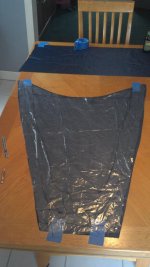 Tape it to the boat and check fit, mark anchor points 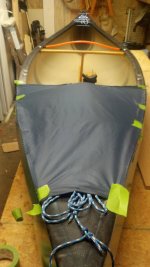 I didn't take any pics of the Velcro or straps. Basically its an 8"x2 1/2" piece of silnylon with a rolled hem all around which is sewn to the cover. Sew a piece of Velcro to it, sew the opposite piece to the cover where the straps would be attaching to the cover (I used a seamstress tape measure to check the distance around the perimeter line and back to the top)

Put it all together and strap it on 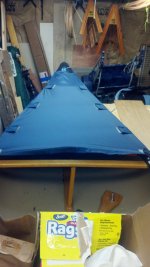 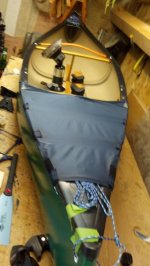 Nice reply. Have you had experience sewing? I have a nice sewing machine I used to downsize my canvas wall tent, but sewing is not easy for me, I did an ok job. A spray cover like yours is great for inclement weather, keeps the packs, canoe and paddler dry...and it's warm under the cover too when I have used one.
Thanks for taking the time to explain, nice post.

I am not a seamstress by any means. My mom taught me to sew when I was about 7. I recently picked it up again after 25 years. If I take my time, my seams come out ok at best.

That is until my wife asks me to hem crap and fix torn stuffed animals for the kids. Funny thing is my wife's mother was a seamstress and it was her machine but my wife can't sew. Go figure right?

I finished the oak yoke and put a coat of sikkens on it. I had a broken gsi sitbacker laying around so I took off the straps and buckles and put them on the REI trail chair. Now I use it as a sitbacker and it's dual purpose! I found that if I strap it on under the seat during portages it holds the yoke in place. 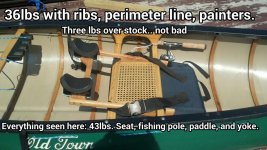 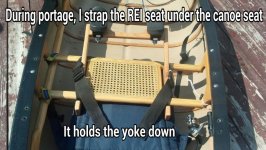 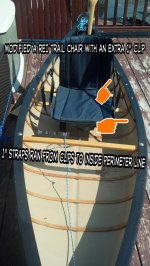 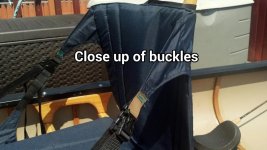 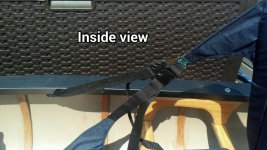 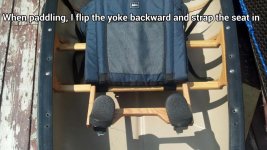 What neat thinking and execution..Did you make your own portage yoke? I have the same cups..have a couple loose ones running around.

I did make the yoke. I made pads too but pictured here are ones that I purchased BEFORE I realized how easy it was to make my own.

(And how much more comfortable the DIY version is)
Jason
You must log in or register to reply here.