Anyone ever try the old system of portaging gear that involved using a ground cloth or tarp as the actual pack carried with a tumpline? Like this: 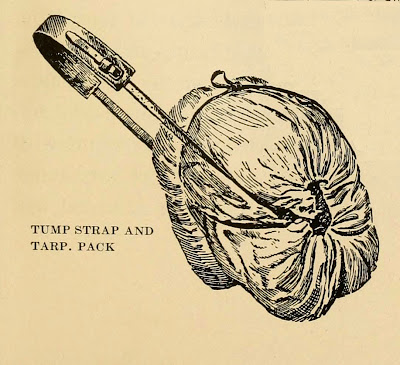 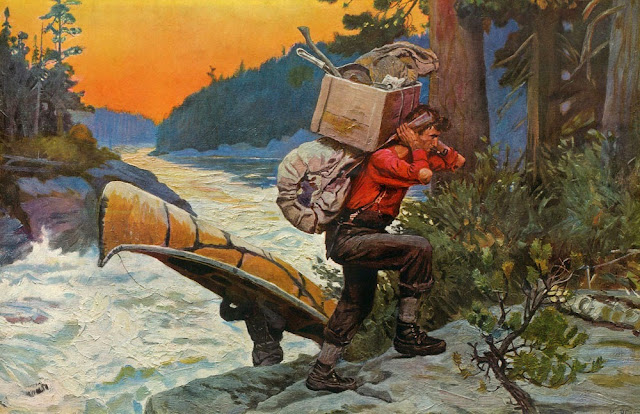 
It seems that by the time many camping books of the early 1900s began being published, this method was being replaced by "modern" canvas packsacks like the Poirier (a.k.a. Duluth Pack) which have themselves been relegated to outdated gear by lots of folks. Of course this system will never be as waterproof as modern canoe packs or as comfortable as padded shoulder straps and hip belt supports, but I like the concept using the tarp for more than one role (i.e. shelter) and doing away with a pack entirely. The most descriptive method I found explaining this packing method is in Woods and Lakes of Maine (1883) by Lucius Hubbard, viewable online at archive.org. Page 102 devotes a few paragraphs describing the bundling technique used by his guides along with the following illustration: 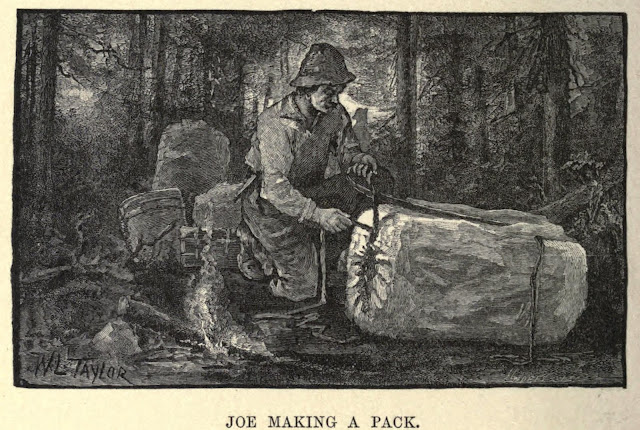 Awesome adventures like Alan's Bloodvein expedition or Memaquay's Marshall Lake gathering or Tear_knee's Temagami trip are just not going to happen for me at the moment. At that stage in life where family responsibilities are taking up all of the potential tripping time. Figured a solution to that somewhat depressing fact would be nice some tinkering around with old timey gear relegated to the history books. Don't have any intentions of a "real" canoe trip with this method, but had made plans to give it a whirl and a quick and safe outing.

My birthday present this year was free time to spend one night camping away from the family...so long as it wasn't too far. The plan was to paddle to the other end of my cottage lake where some undeveloped land has been set aside by generous locals for an overnight camps & picnics. Still within cell phone range and could be back home in an hour and half so got the green light to go from the boss of the family.

As a bit of trial run, I packed up my ground sleeping system which consists of a modern pad, down sleeping bag, extra blanket, canvas bedroll cover and a 6x8' poly tarp as a groundcloth - sort of a mix of new and older stuff. The tumpline is the one made last winter for an accompanying wanigan - it is plenty long with 9' tails. Here are some pics that show the attempt at the packing method. 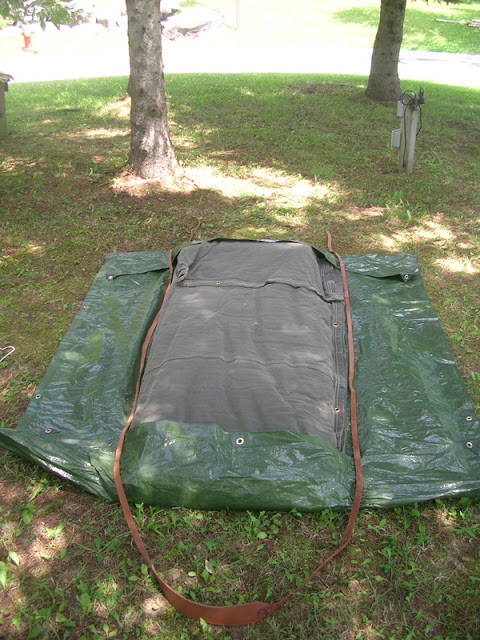 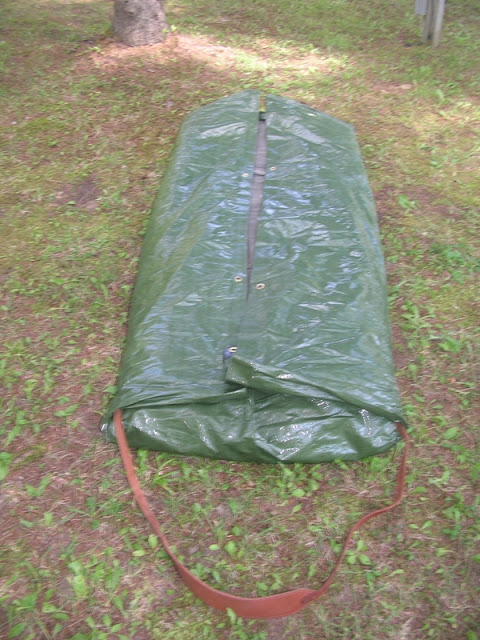 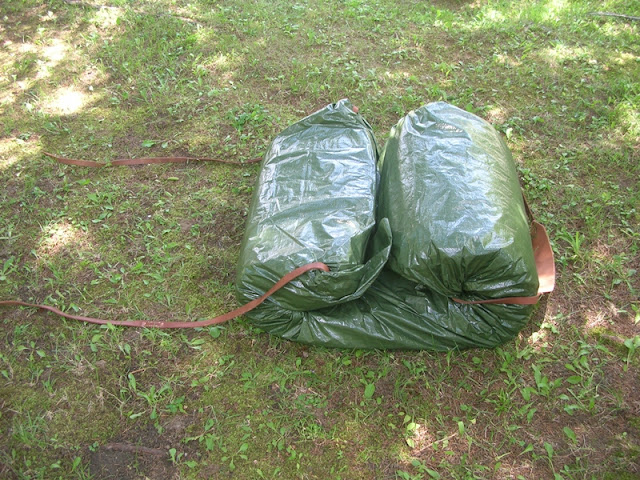 If folded correctly (i.e. not rolled from head to foot), you pull hard on the excess tails of the tumpline while holding the headstrap and the sides cinch up like the drawstring on an open bag. It tightens everything up nicely. Cross the lines, tie off and you end up with a neat bundle: 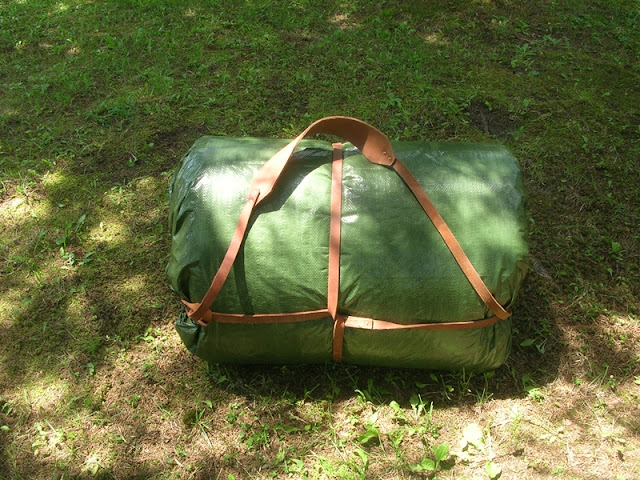 The pack roll fit well enough into the canoe along with the wanigan loaded with food, birthday happy-time beverages and other miscellaneous gear. 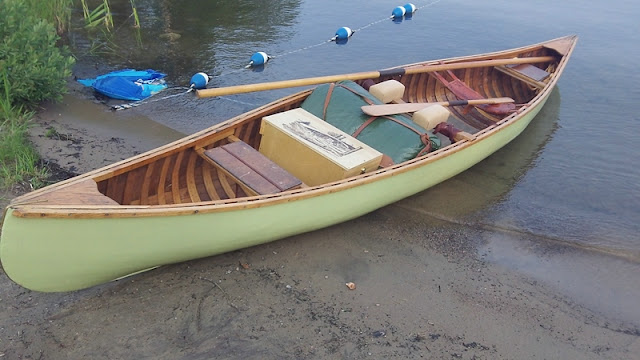 Part of the shoreline is shallow rock and sand so it's great for poling practice too. Ended up splashing round a bit and the poly ground cloth did its job keeping everything dry, but of course wouldn't trust this method entirely if a full submersion took place.

Halfway there and feeling excitment that I'm back in the boat, the cell phone rings. Minor emergency but needed back home right away...arghhh! 45 minutes of "tripping" on an urbanized cottage lake is all I got in this season.

Here is the only action shot while on the water. A standup view while poling in a shallow bay right before the dreaded phone call. 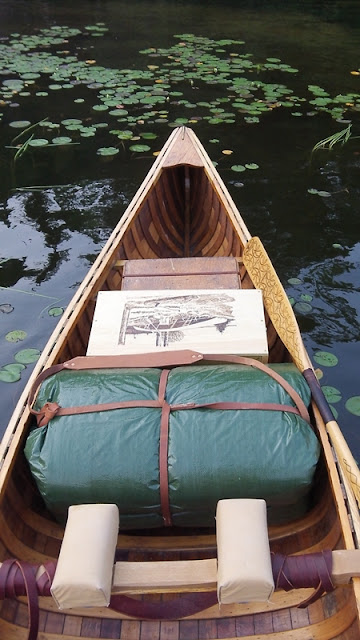 Apologies for all the self-pity seeping through the post. Life is good. Just wanted to end by saying that trip reports by other folks are most appreciated when you're stuck in civilization!

Thanks , Murat. Good to see the methods other than ultra carbon fiber super nano tech that costs a small mortgage.

Great hack of an old idea, but where your 'Cold Handle' fry pan?

Pretty interesting, does look like a fun project to experiment with, as you said, probably not a great tripping solution but fun to play with. Thanks for sharing.

I like the method, and it looks great in the canoe. You'll be able to get out soon, don't worry.. Maybe with the kiddies in tow!

That is great Murat, you never stop surprising me with your founding!! Good work!

The trouble with tump lines is that we are force loading our foreheads; that force transferring to the neck. That is fine and dandy if the user does neck bridges on a regular basis. Some AM football oriented gyms have a Nautilus machine that trains the neck. The larger Q is who among us trains their necks for the strain?
S

Murat - I've used this set-up when doing historically oriented canoe trips such as the French & Indian War event we hold on Lake George each fall. Instead of the poly tarp I use an oilcloth but it's all the same principle and works quite well. Thanks for sharing your experience.

Very cool bedroll Murat. I love the canvas cover and leather tump. An additional tarp could be added to provide shelter? The old and new works well.

Great pic ... that is EXACTLY how I do mine! I put my tump across my chest and arms, around my back and I can still use my arms on the trail. I much prefer blankets to sleeping bags, tarp shelters to tents. My deer camps used to be a bedroll, a small pack with dry goods and my gun. I loved the look of yours with your canoe ... awesome.

I hear ya Charlie. Tump lines do work great but they were mostly used by big strong guys who did this stuff on a regular basis. Thats not me. My thing is to have more packs with less weight in each thereby nullifying the usefullness of a tump anyway. My packs are never heavy enough to need a tump.

The cool factor is pretty high for this rig though and I am pondering the ways I could try it.

Nice idea, glad you posted it with the pictures, good conversation. On another note, I have a quart of that color paint on your canoe and I'm sold on it for my second Chum I'm working on. I painted a 17' Prospector like that and the new owner loved it.

I also ordered a Phillip Goodwin repo "Strange Waters" for my shop, one of many to come, Thank$ Murat! HaHa

I also love that color, I think that is what I will have my Timber Cruiser ( When I have the money to make it happen) Painted to!! Isn't called Chestnut "grey"?

Appreciate all the feedback, especially from those who've given the method a whirl. Snapper, I've been eye-balling an oilcloth tarp for a while now but the exchange rate and shipping costs are tough to swallow at the moment. As an affordable alternative, started on a 10x10 tarp from a canvas painter's dropcloth and might post on that soon too. Plan on using this canvas tarp as the pack cloth (along with the exisiting poly ground sheet) as an extra bit of shelter.

I'm a big fan of that original "Chestnut Grey" colour too. This shade isn't an exact match but close enough for a beater canoe. Got a tip to use Tremclad Rust paint readily available here in Canada as a cheaper alternative to the Epifanes and Kirby paints in the U.S. A few years back I took my then 4 year old son to the local hardware store so he could pick a colour of his choice. He ended picking that one and called it "froggie green". I think it was officially called "Moss". Anyway, the paint was at bargain basement price - $4.95 CND a quart! Just checked out the company website and it looks they discontinued the colour. Not enough cheapo, nostalgic, chestnut grey loving people out there to support it, I suppose.

the biggest trouble with tump lines is that they're easy to use wrong...

they're sure not for everyone, but learning how to really use them really changed my game -- from heavy canoes and packs to outboards, fuel cans and coolers...

more packs / less weight is a great motto -- tho, i tend to use a tump and carry two canvas packs at a go -- for really rough spots, i can drop one and triple-carry that part...

i love to watch what you're doing Murat -- i've contemplated going to a tump-roll myself -- i've sorta used this at my camp for humping large canvas tents with odds and sods tucked inside, but never for real canoe trips...

i used to hate this colour, it's grown on me...

I prefer a tump for carrying my food container, I tried some shoulder straps on it but they're no good, the tump is the way to go for sure with that thing.

the summer camp i started proper-canoe tripping with back in the early 80's taught us to roll our sleeping bags in ground-cloths very much like this, sans tump -- this was then tested by heaving it into the lake for five or so minutes...on-trip these packs were stuffed into woods bags, but were surprisingly effective...rolled by 14-year old trippers each morning before grinding down the magnetawan and temagami rivers for a week or so...
You must log in or register to reply here.