Mini-Whelan, or "How small is too Small?"

Was prepping for my test trip last year, an realized that I did not have a tent of any description. I don't really want to borrow my parents' dome, and I don't want to put a ton of cash into something.

I've been looking at tarp-tents, etc for a bit, and realize "Hey! I have about 13' of 60" 6oz. Dacron left over from the SOF Build! It shouldn't take long to do something with that!"

(Many of my projects seem to start in a similar fashion. Go figure.)

I figure something along the lines of a Whelan Lean, since soooo many people seem to love it. But, I only have so much fabric, and no time to order more. So it gets scaled down. Some minor accessories later, and I've learned the following:

- Given Upholstery Thread and Denim Needles, a home sewing machine can handle multiple layers of Dacron just fine. Just go gentle.
- Cheap Tulle from the Mall-Wart may make a decent Mosquito Block, but it is a pain to sew. Especially when you're trying to interface it w/said Dacron.
- Said Tulle needs to have a border fabric on all edges to keep it under control. Preferably with zips/ties to hold it down, which sort of defeats the purpose of the Whelan's configurabillity options.
- I'm bad a project estimation. (This I should know, but I was actually putting in grommets out in the field. That's pushing it a bit.)

- Need good stakes! See This Thread/Post.
- Dacron blocks wind very well! (It's sailcloth, so this should not be a surprise...)
- Without good stakes, it's hard to get the flaps to overlap in a way that blocks most mosquitoes. (Wind was high enough that this was not a huge deal, but still.

I think that this would have kept me dry in anything short of a monsoon, as long as the orientation was right, but... the space was limited.

I didn't get rained on, but if there was more than a light sprinkle (Enough that I wanted to stay in camp) the plan was to supplement with a Flat/Rectangular tarp for loafing about.

So, more experienced outdoors people: What do you look for when balancing cozy vs. room to do a little work in?

About 8 feet long by maybe 6-7 feet deep. I have a nylon Whelen that I have used in the snow with a fire in front.
I have a Baker tent made of canvas that has no floor and about 11 feet square. It is too big for canoe camping.

If you are trying to sleep two people, then you might go a little deeper.
Last edited: May 23, 2020
B

I would personally go with the size that Townsend Whelen came up with. I've had two, one made with 7 oz. cotton canvas of some sort, made for me by tent & awning shop in Columbia SC, when I was stationed near there at Sumter. I used the heck out of it, just the right size for a single camper, will sleep two easy enough, crowded with three. I gave it to a young friend, still in use in the high desert and mountain country North and West of Riverton Wyoming. Years latter I started craving another, Bothwell Voyaguer a member of this forum made a really nice one for me a few years ago, which is of lighter weight cotton. During bug season the Whelen tent needs a separate bug net that ties in to cover your bed roll. It really is a great tent and with a fire out front is very toasty in spring and fall weather. By selecting the correct species of firewood you can almost eliminate spark holes in the tent. A lot of good reading on Whelen tents on the inter-web.

I don't know anything about Whelan tents or their dimensions, but people have slept aground in all sorts of tiny tube tents and bivy sacks and aloft in hammocks. What you've made looks good to me. Put a tarp over it for extra protection. It's just a sleeping nook, not a living room.

I guess I think differently about the size. I have been caught too many times in multi-day, non stop rains. I need a shelter I can carry easily, but can do some cooking and moving about in. Also, I have traveled the last 4 years with a 60 plus pound dog. For me a near perfect solution is a Cooke Custom Sewing lean 1 plus ( screen in front )

it is 5 feet high, 7 feet wide and about 11 feet long, but really about 9feet Of length are useable. It weighs around 3 pounds and packs to the side of a sleeping bag packed.

it looks like a baker lean tent. I would prefer a Lean2 Plus, same size but wider, but this is what I have and it has served myself and my dog Jake very well ... even in some tremendous storms.

Do you have enough material for something this size?

Thanks for all the feedback so far!

Sounds like this is a very.... personal... choice. I think my current size would work very well if I was only concerned with sleeping, but if I'm lazing about on a nasty day...

Bob B. Wow... Cooke likes them large... I would need to get material if I were to do anything other than add trimmings to what I have, but that's not really an issue.

I'm kind of liking the more solid feel of a heavier cloth. I'm sure the silnylon does it's job well, and is very light, just not sure It'd be for me as a primary tent...

Also as a bit of a side point: has anyone group-tripped with one of these open-side things? I'm sure groups vary, but does the lack of a visual barrier lead to social awkwardness?

Something I rigged up based on the Whelen "Shelter Cloth" (7' x 6', iirc) but with a Whelen Lean-to-Type overhang and sides (proportions on the sides are just scaled down from the original 7x6 isosceles triangles). Weighs 2.5lbs, and fits just about right... 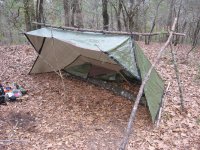 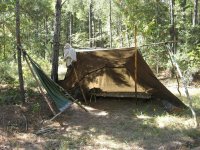 (before anyone complains that i've cut trees, i had permission to do so.)

The 'bush chair' in the photo is also my work... 24x54, doubled silnylon with a duck sleeve for the bottom stick. Weighs 8oz... you can tie one end to a tree, and the ends of the lower stick can be tied to another tree with some cordage, like half a hammock, or set it up in a frame as shown. Far more comfortable than any camp chair to me.
B

I have always thought that I should build a mini Whelen Lean-to out of a few Space All Weather Blankets. Probably like sleeping in a reflector oven with a nice fire out front. What is your tent made out of? Do you have measurements that you can share for those of us that trouble scaling down or up? The one that Bothwell Voyageur made for me I never weighed, but after a good nights rain is fairly heavy with moisture, although it remains dry inside. I did soak it in Nikwax Cotton Proof, which is a good product for cotton fabric. I also made a wedge tent mosquito bar to hang inside, tucking the bottom edges under my bed to insure a good nights sleep in warm weather.
Nice job on your Whelens.

Hey Boreal... if i'm allowed to cross link to another forum, here you go: This is my build thread (this was my second build)


and i used this plan.
https://www.backpacking.net/makegear/huntersleanto/
Last edited: Jun 19, 2020
B

Thank You for the tutorial. Nothing better than sleeping in a open front front tent before and after bug season.

Found this, later.... it's my mods to the Whelen Shelter Cloth, with the longer sides that are the same proportions as those of the LeanTo. I normally keep all my 'plans' together, but found this one in a folder of photos from the build thread.... I need to put it back! 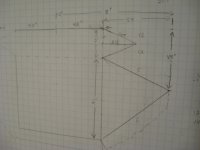 I wonder how a mini Whelan would perform made out of Dyneema / cuben fiber?

I think the design would work fine... but the intended purpose of putting a fire directly in front of them would endanger the material... I've got a ton of small pinholes in the mini Whelen (crappy wood was all i had available where i used it), but they're readily fixed with duct tape or a dab of silicone glue. my larger, full sized one has no holes mostly due to care in selecting fire wood, but also the distance from the fire to the top is larger... but i'd sure hate to ruin cuben fiber with sparks... i don't even let my silnylon stuff get near fire.

i think you'd have a dandy shelter if you made up the mini, with overhang/wings, in cuben fiber... pretty stormproof if sited correctly.

Been watching this thread with interest. Thought I'd add my 2 cents.
The Whelen design is intended, as has been mentioned to have that big open front for use with a fire. Just like a Baker Tent the back wall is intended to reflect heat back down upon the sleeper. As a by product this means the wall is nice and steep so it help rain run off. This is where I feel the CCS lean misses out. The long shallow roof is difficult to keep taught and any internal condensation doesn't run down to the floor as fast as a shelter with a steep roof line. We have a similar problem with our Sierra Designs Tensegrity though that does at least have better ventilation than the CCS Lean. MSR made a tent, the Missing Link, a while back that had a lot of the features of the Whelen
If you want to go smaller you generally need to maintain the same back wall angle with a relatively shallow front to back depth, one of the reasons the awning is so important. Without the awning you end up with a lower ridge line.The small 9 by 6 tarp I use backpacking shows this effect. Without the awning I need the ridge very low for weather protection. 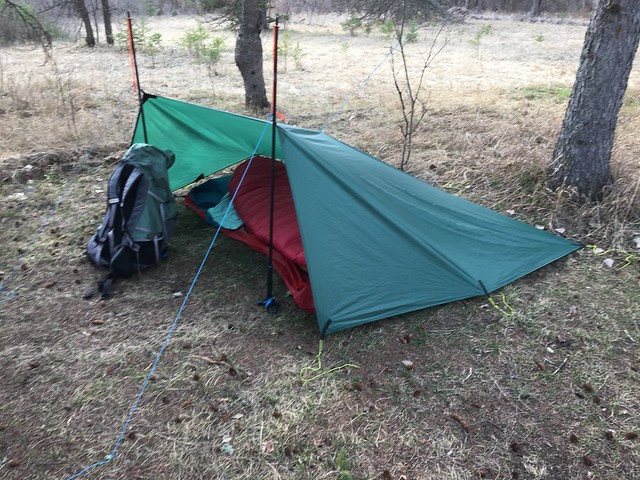 I think hammock campers have got it sorted with their winter tarp designs. Being able to lift one side of the tarp up into "porch mode" is a great option, while the end doors help keep out the wind. A simple A frame tent that could be opened right up to the ridge would be a similar idea.
As to using DCF, Aside from the ridiculous price tag, it doesn't do heat very well, shrivels up like a poly bag, on top of the spark hole issue and I suspect it may allow a lot of the infra-red radiation to pass right through. Plus it has limited life span compared to sil coated fabrics that go on for many, many years.
You must log in or register to reply here.