The Toronto air show taking place at the waterfront on the Labor Day weekend had some dramatic weather on Sunday, with rain, stormy clouds and light, and the planes kept flying right through it all. I forgot to bring the compact waterproof point-and-shoot (this maybe belongs in the what have you forgotten thread)... and probably missed out on some great pix. The forecast the next day was for rain again, so hoping for a repeat of the drama, I went again, with camera this time, but only got hazy skies. There was a bright red stunt pilot flying very low so took a few anyway. 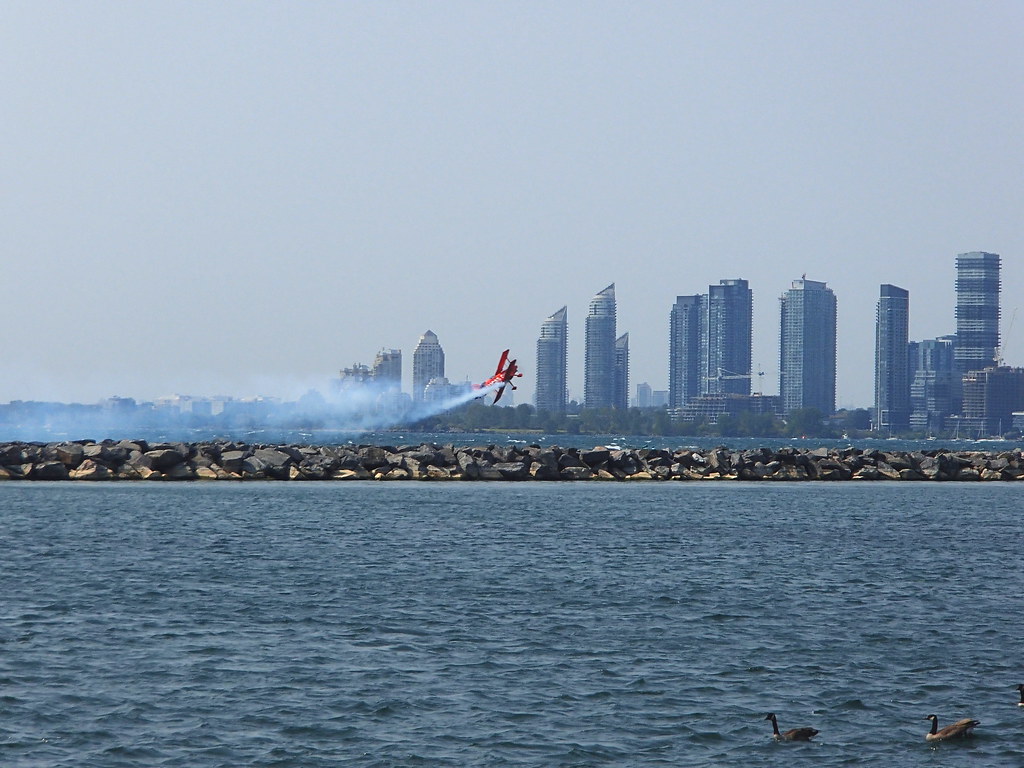 More blur is visible in a blown-up portion... the background buildings are sharp. Image stabilization must have been working to keep the buildings sharp rather than the smaller plane, even though the camera was being panned to follow the plane's movements. 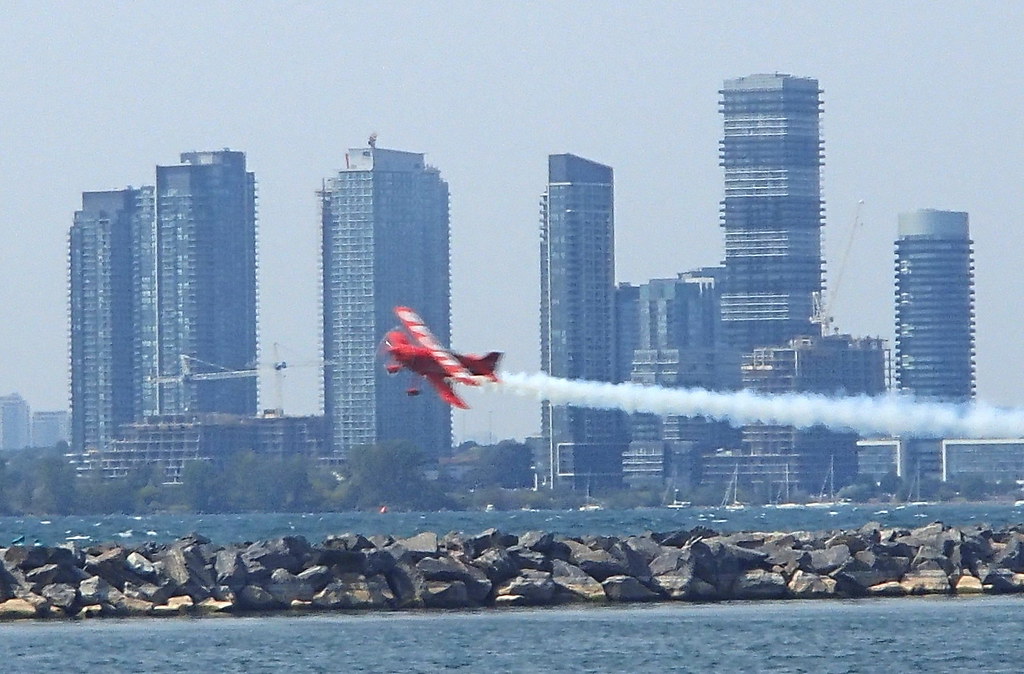 At this time of year, migrating vees of geese can make for some great photos (still haven't managed to catch this in a camera even though several times it looked great from a canoe)... so... note to self, when those honking sounds are approaching, have the camera ready with disabled image stabilization and increased ISO for higher shutter speed.

Use tracking AF and a much faster shutter speed.
It's always difficult with a cluttered background

Thanks... that is another option, along with the maybe quicker "sports" selection that hasn't been used yet.. All this needs to be tested, probably panning on cars moving on the highway.

Do you have optical or electronic image stabilization?

My guess is that image stabilization isn't the issue, but basic focus and shutter speed. On modern computerameras all these inscrutable features -- many of them completely unnecessary -- interact with each other in complex and often detrimental ways. It takes a lot of experimentation.

It's tough getting the camera to focus on what you want while shooting and panning. I tried continuously shooting s for birds coming and going last winter.
Lots of other people were doing the same.
It might help to shoot fast objects starting coming at you

Do you have optical or electronic image stabilization?
Click to expand...

It's both, according to Olympus... there's software to create sharper pictures and mechanical sensor shifting.

I don't understand how software works for IS since there isn't any detailed info on it... it may just be the image processor selecting a higher shutter speed in automatic mode, or in "sports" mode where there's movement. Or there might be a shifting of pixel data if the processor detects blur due to camera movement.

The mechanical stabilization is more understandable and standard across many cameras. The sensor sits on a movable platter that moves in yaw, pitch and roll to reduce image movement due to shake effects and eliminate blur due to camera movement.

Whether image stabilization is the issue in the above photos could have been determined at the time by switching off the IS and taking more photos the same way, panning on the plane, and looking for a difference, IS on and off.

I'll try and do something along the same lines during the next several days by panning the camera on highway traffic at the same shutter speed, 1/160 sec, with and without IS... if IS is causing the subject to blur and is keeping the background sharp while panning, that effect should disappear when IS is disabled. Along with some other experimentation, AF tracking, higher ISO for faster shutter speed and the mystery "sports" setting.

I'm not aware of any settings I can change. Have no idea if it's got image stabilization. It does have focus lock

The pics turned out pretty sharp

All these functions and modes have different terminologies. Sports modes will usually shift you into higher shutter speeds, lower the f/stop to reduce depth of field and increase ISO, most of which you can do yourself by using shutter priority mode for action shots. For the plane, I'd try at least 1/500 of a second in shutter priority.

A sports mode, or just any camera in general, may also have an autofocus tracking mode. Sometimes they have a "predictive" tracking mode. Supposedly, this allows you to focus on a single player, and then that player will supposedly stay in focus as she moves around the court. I've used this as a photographer at basketball games, but it doesn't work all that well, especially when the player is moving towards me. Maybe this kind of tracking autofocus has become much faster in the past three or four years. I don't know and don't really care.

I just go old-fashioned and zone focus. Shoot the player (plane) when she's in my focus zone. Using a fast shutter speed.

Image stabilization be damned. I think that's more important for video than stills, such as when you're shooting video while walking. Use a monopod to reduce camera shake. Also, shoot action shots in bursts. Most sports photographers delete 95+% of their shots.

I took the time yesterday to shoot some test photos to see how image stabilization affects blurring and sharpness when following panned and moving subjects at slower shutter speeds. Since there were no planes flying past at the Toronto waterfront and the air show was over, settled for panning the camera on moving cars on the highway instead.

Below, shooting on bright sunny day at 1/250 sec at the slowest ISO 100 with the camera following the moving cars at what seemed to be a normal panning rate more or less... with image stabilization on, the anti-blur mechanism on the sensor is including the movement of the background features to try and sharpen up the image, so the car details on the subject aren't sharp with the car doors lines and the rear edge lines blurred. And the background details aren't blurred as they should be, if the image stabilization mechanism had been following the car. The sensor is probably trying to keep everything in the frame sharp and that results in overall blurring, with the overall result being nothing is really sharp. 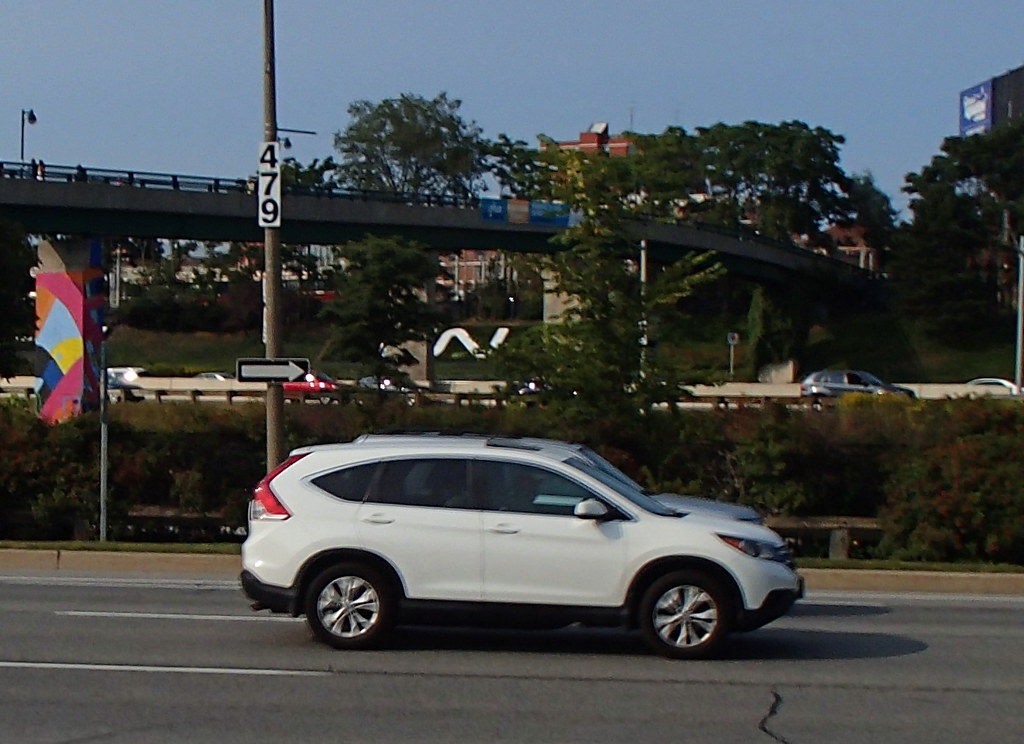 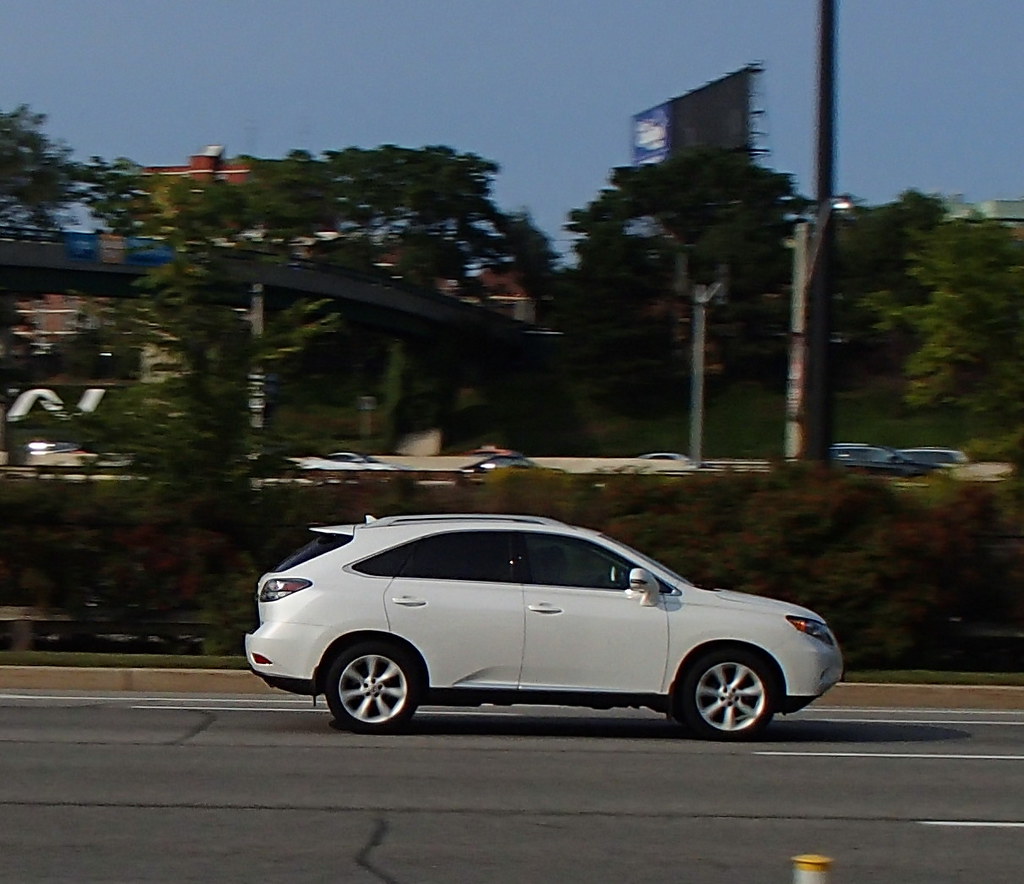 So in the much-anticipated someday-photo of a vee of geese flying south maybe this fall, I must remember to turn the image stabilization OFF... hoping that there's enough time to do that in the evening when light is low and image stabilization might otherwise help to sharpen up non-moving scenics.


Other test notes while I was at it... AF tracking didn't result in any significant improvements, since the cars should have been far enough away to be in focus at all times. Closer in, it could have helped, if the camera had recognized the subject and tracked on it to maintain focus. Switching to AF tracking mode takes time, and probably not much needed outdoors, at least for me.

The "sports" setting... switching to this is relatively quick since it's on a different menu...this increased shutter speed to sharpen up a moving subject (going from 1/250 to 1/1250 sec) and also helped improve the overall sharpness. The same as bumping up the ISO setting from 100 to about 500, which is on a different menu and slower to get to.

Test is over, put down your pens... I agree, image stabilization be damned, especially while panning on a moving subject.

PS... the above car photos are blow-ups from small portions of frames that were shot at a wide angle 28mm lens equivalent while the plane earlier on was shot in telephoto at 160... the blurring effect would probably be greater in telephoto since there's more image shake and movement. I was trying to duplicate the large area of background dominating the response of image stabilization with the small size of the subject being relatively insignificant.
Last edited: Sep 17, 2017

My Nikon P7800 P&S instructions say to turn off image stabilization ("vibration reduction" = VR) when the camera is used on a tripod, which I always do when videoing basketball games. Keep in mind that when using a video camera on a tripod at a sports event you are panning it constantly left and right and even up and down.

I didn't think about it earlier, but it now makes some parallel sense that you might not want image stabilization on for smooth panning movement on still shots.

Says that if VR is on when camera is on a tripod, monopod or other circumstances where there is unlikely to be hand shake (maybe including wide angle lenses), the VR will still "look" for shakiness, and if it can't find any, this may cause "technical problems".

Finally, one book says VR (like auto focus) will create lag between the time you press the shutter button and the time the photo is taken, because the photo elements are looking for hand shake and corrections for it during this lag interval. Hence, your shot may end up slightly "late" when VR is on.

I'm going to be working on night photos with a tripod. 25 sec shutter speed. im so happy my lens is manual and VR-IS less
The only reason I mention it is that if you are using a tripod you can get great lenses for a whole lot less money than those same lenses with image stabilization.

Two years later and still experimenting with technique... I got a chance to fool around again at the Toronto air show... while panning... does image stabilization blur a panned moving subject when there is background detail?

Shutter speeds were not fast enough to eliminate blur. Upping the ISO higher resulted in greater grain effect, esp in blue skies which should have a smooth appearance, without grain or artifacts.

Shooting moving subjects like waterfowl and flying vees of geese, switching the stabilization off can take ten seconds minimum on the menu, so some anticipation might be needed... where's that honking coming from?

My Panasonic ZS100 has two stabilization modes. Full for all movements and panning where it only compensates for up and down movements. Now I understand why.

Marten, I've enjoyed your vids with the grey jays feeding from the hand several times in the past.

Thanks for the info on the stabilization... something to look for in the next camera.

Here's a blown-up portion of a photo showing with image stabilization turned off, the background is blurred a little as it should be... compare with the first photo up above with IS on.


PS.... pix taken with a little Olympus TG-820 waterproof point-and-shoot, an anyplace, anytime pocket camera. The heavy duty telephotos and tripods at air shows will provide sharper results but for me it's not that big a deal. 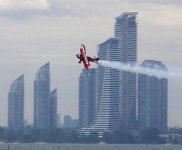 And another, practicing panning on a pigeon, where there's much more blur going on... both pics taken at 1/125, no IS, ISO kept lower at 200 to try and keep skies from being grainy. 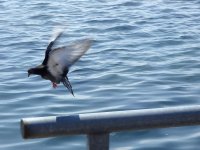