It isn't exactly a canoe, but I built a 14' pirogue to fish out of. It has a wooden seat that isn't fastened down and is moveable depending on the load (cooler, dog, etc.). I'd kind of like to add a foot rest(s), but really don't want to glue/bolt in anything permanent at least to start with. I think I recall seeing mention of using a cord with some kind of rest that just attached to the seat, possibly here on this forum. I wasn't able to find anything via a search. I was thinking just a dowel or maybe a foam block.

Anyone remember do anything like that or recall a link?

Pics please! I remember a discussion like that too.

I didn't take many pictures and she isn't much too look at up close She paddles real nice and doesn't look bad as long as you stay back a bit. I found that despite being a single blade canoeist I like paddling the pirogue with a double blade paddle. She just feels more like a kayak to me in some way.

I haven't paddled her much yet having just finished the build, but hope to use her for fly fishing for panfish and maybe other species this year. I figure that since she is a lot lighter than my canoe (she is 30 pounds with 4mm okoume ply and the outside and floor glassed with 6 ounce glass, not counting the seat) and therefore easier to load, unload, and carry to and from the water. I figure frequency of use is greatly affected by ease of loading and unloading, so she will see more use than the canoe. For now I may leave her on the roof rack and try to get out several times per week on waters a few minutes from the house.

I also live a bit farther but fairly close to the gulf so there are also lots of sheltered tidal waters where species like sea trout are available if I choose to venture a just bit farther from home. She isn't really built for open water, but with 12" sides can probably handle some chop, so she is probably okay even for near shore paddling in the gulf on calm days and close to shelter with caution. I figure she can even carry ultralight camping gear and a couple days of food and water for a float down some of the panhandle rivers. I am used to camping with an ultralight packing style when backpacking and bicycle touring so I figure it might be fun to try it with the pirogue.

I've tried a wooden dowel attached by lines to my fixed central seat in one of my canoes, and also just two long loops of strap attached to the seat. They sort of of worked but never felt nearly as useful as a fixed foot bar or foot braces. If they could stay in the proper place on the bottom of my feet without slipping down, which did happen, maybe they added 2% to my overall speed. But speed was never my interest, so I quickly dropped the kludgy experiment, especially since I am 90% a kneeler. However, it's not hard to rig up and try.
S

What Glenn said The dowel attached by lines (even simple cotton clothesline) will work for a temporary fix. Not the best as it can move around a lot but it should take care of things.

Pete, I’ve seen DIY footbraces, hung from the gunwales or off a thwart, with horizontal lines or straps to keep them from swinging like a trapeze. Better than nothing, but not by much in comparison to a fixed (or adjustable foot) brace and kinda kludgy.

Or one of the adjustable pedal systems

I put a set of those Slidelocks in a recent rebuild, and found them handy to be able to adjust on the fly while seated. When I initially adjusted them in the Slidelock notch location I was definitely not wearing mukluks, and when I got in the canoe with mukluks on they were too close. The adjustability makes a difference to me; stacked heel mukluks vs thin watershoes (or barefoot) makes for some fore/aft foot brace comfort location variation.

But, Houston we may have a problem


PeteStaehling said:
It has a wooden seat that isn't fastened down and is moveable depending on the load (cooler, dog, etc.).
Click to expand...

I’m presuming the seat is fastened to the hull in some fashion, but if not, if it is freestanding (sitting), too much pressure against the foot brace may tend to simply slide the seat backwards.

One possible DIY solution, that doesn’t require drilling holes in the hull, would be to attach the foot brace to the seat itself. Something like two horizontal struts off the bottom edges of the seat frame, forward to foot position with a cross bar there at ball-of-foot height.

That could be a permanent attachment, or a removable |_| shaped frame pinned in place to the bottom of the seat risers. Maybe some notches for the foot bar, so it was still a bit adjustable in distance from the seat.

That at least would be three pieces of wood cheap and simple to DIY, and maybe a fun design challenge if you wanted notches for adjustability.
R

I made a foot-brace that has worked well for me. I posted at Canadian Canoe Routes: https://www.myccr.com/phpbbforum/viewtopic.php?f=20&t=17564&p=410068#p410068. It consists of a piece of aluminum tubing, two nylon straps and 2 foam canoe carrier pieces.

Mike, so far the seat is either free standing or in one position (a bit far forward maybe) anchored with a notch that sits over the center rib (I haven't yet tried it there). I have a 70# dog that will go along sometimes and a cooler that will go sometimes so I am unsure about locking down the seat. Something with notches that allows various offsets from the center rib might be a solution. That could either be an attachment for the seat or another seat.

I am unsure how much the range of adjustment of seat position will need to be or whether I will be able to get by with a fixed position.

I may try something seat attached, perhaps with cords to start and see if the seat moving is an issue. The little pirogue moves along so easily I suspect unwanted seat moving may be a non issue with my laid back usage in sheltered waters. I know that when I got in the boat and the seat was off center a bit and I needed to move it it wouldn't slide without lifting my weight off of it. That said the piece that has the foot rests could have notches that engage the center frame allowing the whole seat/footrest assembly to move fore and aft.

I have a notion that something that looks like a little barbell with minicell ends attached to the seat with cord just might work. Width could be adjustable to a friction fit in the hull and reach could be adjusted with a cam cleat.

On the other hand I have used kayak foot rests on many different boats of various types and they work well. I have not used the Wenonah setup, but it does look interesting.

It may make sense to get more of a feel for how much range of adjustment I actually need (if any?). If the seat were to be in one place I think I'd be satisfied with a little piece of false rib glued to each side at an appropriate angle. I guess I am not ruling out a series of several of them.

The seat looks like the image below. Supposedly the notch goes over the center rib, but I am thinking the weight would be pretty far forward that way unless there was some effort to put some weight behind the paddler especially if my dog were in the front (where I could keep an eye on her). On hindsight I wonder if a stadium seat and a pfd boat seat cushion wouldn't have been the way to go. I could still do that. 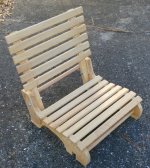 YAER (Yet Another Explorer Rebuild)
2 3