I installed a foot brace today in the solo canoe I built and finished in August. I know foot braces are not traditional but I find it makes a world of difference to me comfort-wise when paddling ( I am a sitter, not a kneeler). Do any of you other sitters find them useful?

I paddled for 45 minutes today, the first time paddling anything since Christmas day 2011 due to a rotator cuff tear and subsequent surgery on 4 June. My release from the Dr is in 2 weeks so I jumped the gun a bit but it felt great.
Dave

Foot braces are traditional for sitting paddlers. There is no reason not to put one in. But when you say not traditional I take it that you mean they are not supplied often in off the rack canoes.

A foot brace will counteract the tendency to pull yourself forward off the seat with each power stroke. It makes a lot of difference in power transmitted to the hull and also makes life far easier for your back.

YC, thanks for the excellent wording of why we use foot braces. I know mine is an important part of my paddling technique, especially when the headwinds kick up.

YC,
Thanks for the correction. I know they are options and not usually standard equipment.
Dave
W

I don't know what I would do without my brace. I don't kneel and the brace really helps as others have stated so well above.
B

Look at the header photo on this forum. You can see a footbrace mounted on tracks ( for adjustability) under the bent paddle .

I went with these peg kind instead of the cross brace type for a few reasons.
1) they are easy to adjust.
2) the pegs are removable from the slides.
3) they do not get in the way when packing for multi-day trips.
4) my.....dare I say it......cooler fits between them and they are still usable too.

Looks like you have a Royalex boat. How did you fasten them? I have had no luck with glue as the curve of the boat does not match the straight of the base of the footpeg. You have the Harmony footpegs as I do.


I wonder if bolting them in will cause cracks in the Royalex. If you screwed them in how did you avoid that unhappiness?

I see screws or bolts through the sides in the bottom photo.
P

If you don't want to drill holes there are at least a couple of ways to mount this type of foot brace. One could shape a strip of wood to the contour of the hull interior, bond it to the hull with epoxy, then secure the braces to the wood with stainless steel sheet metal screws. Or one could 'glass into the side of the hull on each side a pair of stainless steel studs like these:
http://www.clcboats.com/shop/produc...-rudders/internal-footbrace-mounting-kit.html

I seem to be in the minority regarding foot braces. I do have a bar type foot brace in a Sawyer Summersong and I feel it is of some benefit but I don't feel like it provides the great benefit that a lot of folks claim. I'm sure if I were a marathon racer I would use a foot brace but for recreational boating it just doesn't make that much difference for me. If I use a foot brace I prefer the bar type since it allows the feet to be positioned closer to the mid-line of the canoe. If one uses this type of brace along with some foam "knee bumps" glued to the hull sides just below the gunwales, a bar brace allows one to not only brace the feet forward against the bar, but against each other. That allows you to push your knees into the bumps for more stability.
Last edited: Nov 25, 2013

Yes they are bolted in with the supplied hardware.
I had asked on here (or maybe ADKforum) about epoxying them in because I didn't want to drill holes in the hull. I believe YC replied her experience with them popping of because of the flex. It made sense to me so I went ahead and bolted them.
Never thought about cold cracking at those holes but like pblanc said, and everything I have ever read cold crack are from the wood and royalex expanding and contracting at different rates. I will keep an eye in them and report back if I have any issues.

I kayak as much as I canoe so those foot braces feel right to me. I use them when I use my double blade, I mostly kneel when single blading.

We intended to bolt the footpegs in the Argosy over the summer but some 1900 canoe hulk has taken our attention away. Plus installing hardwood flooring in the house. We have to get back to the boat before we lose all the hardware...(duh if it can be lost we will ..). Now that I have my readers on I see the screws..

Another duh.! I wasn't worried about cold cracking but rather stress from pressure on the footpads.
B

Dave ,, where did u purchase your foot pegs?

Well, I actually work at a canoe and kayak shop in Maryland and there was a old one laying around that I just grabbed. Perks, you know. I am most familiar with the aluminum Wenonah footbrace as pictured in the header photo. Requires pop rivets or bolts through the hull. Available by special order through Wenonah dealers. The kayak type foot pegs can be ordered on line from Rutabaga or Austin Canoe and Kayak and other places. That type doesn't work well in wide canoes because you have to spread your legs too far apart. The full width brace would be better. I made one once out of a broom handle suspended from a thwart that was forward of the seat by 1/8" cord, and 2 straps that attached each end of the broom handle to the seat frame that took the pressure from pushing on it with my feet.
Last edited: Dec 4, 2013

If the paddler sits, they need a footbrace for bone to boat contact. The Glutimus maximus amounts to the old Buick fluid drive, our arses squish around a lot and forward power is lost in the movement. Cross bars are better for ergonomics, we pivot/torso rotate more but most don't paddle at that level. Kayak footbraces can be screwed or glued to a canoe's sidewalls pretty easily The wider footprint stance compromises rotation a little but makes room for packs, and the several slide fit units now available make it easy to adjust a tight fit when we want to run the boat and a looser spacing when we want to kick back and wait for the osprey to come back to the nest. That bone to hull also improves stability and paddler control of the boat.
Last edited: Jan 4, 2014
G

Nearly all of my canoes have a foot brace bar (the Wenonah slider) and I have had zero problems with the holes drilled to accommodate that hardware. It may actually help that the bar in that Wenonah slider is tensioned in place with little twist knobs instead of the older-style and more rigid wing nuts through drilled holes – I ran a broken mill dam in my Mohawk Odyssey and slammed the bow into a rock at the bottom hard enough to throw me forward off the seat; instead of tearing the foot brace bar through the RX the bar slid forward. (kneeling suggestions unnecessary)

Thinking about it, I have never seen cold cracks emanating from a pop rivet in RX


pblanc said:
Cold cracks sometimes occur in wood trimmed Royalex boats but this is attributed to differential expansion of the Royalex and wood. I read somewhere someone claiming that drilling holes through Royalex was a bad idea since it exposed the foam core to water which caused accelerated degradation, but I have drilled hundreds of holes through Royalex canoes below the gunwales for airbag lacing and not observed any evidence of this.
Click to expand...


Pete, nearly all of my RX hulls are drilled for float bag lacing or DIY covers and I have not (knock wood) had any cold crack issues. Of course I no longer have any RX canoes with wood gunwales.

Both were Maryland boats, so not exactly the bitterest of winter temps. One was a $100 fixer-upper, an ancient MR Explorer. I went to look only because it was minutes from home. That boat had cracked along the sheerline on both sides at nearly every float bag lacing hole, even those center spaced between the gunwale pop rivets.

The other was a friend’s RX/vinyl Old Town. He stored his boats outside on cunningly simplistic lean-to racks, essentially a set of 2x4’s with pegs, leaned / against a wall. That canoe similarly cold cracked at the lacing bag holes, but only along one gunwale – the side that habitually came off the car on onto the racks downhill.

My personal (and unsubstantiated) belief if that cold cracks develop in the rare RX hull that had some construction miscue, in the forming of the Royalex into a hull shape (oven too hot, or not hot enough), or perhaps in the manufacture of the RX sheet itself.

With the seemingly soon to be absence of new Royalex hulls it becomes a moot point mystery.

I'd guess all flatwater marathon racing canoes have foot braces, almost always the bar type. They also have bucket or tractor seats. There is a connection between the bar and this type of seat, literally.

If you paddle hard with your feet planted on the brace, you tend to slide backwards off the back of the seat. The up-curled back lip on the tractor seat prevents the backslide. By wedging your body between your feet on the brace and your sitzbone up against the back lip of the tractor seat, you have a powerful stationary body base, solidly connected to the hull. Therefore, you can generate all the power you are capable of on the forward stroke without causing any energy-wasting body slippage, which allows all the power to be devoted to forward hull propulsion.

Thus the Wenonah bar brace works very well on my Hemlock SRT with Deal bucket seat. The Conk Comfort Curve seat also has a sort of raised back edge--because the front edge is down-curved--so it's more effective as a foot brace seat than a flat cane or webbed seat. (It's also much better than a flat seat for kneeling, it's primary purpose.)

The Wenonah bar brace can be adjusted forward or aft or completely removed in five seconds via knobs if you need to do that for gear arrangement or car topping. It also allows you to place your feet at the ends or in the middle of the bar for different paddling stances, such as one leg forward, or in different conditions.

You don't need to bolt or rivet the Wenonah bar track to the hull. I had the track screwed into a strip of ash, which is glued to the hull. 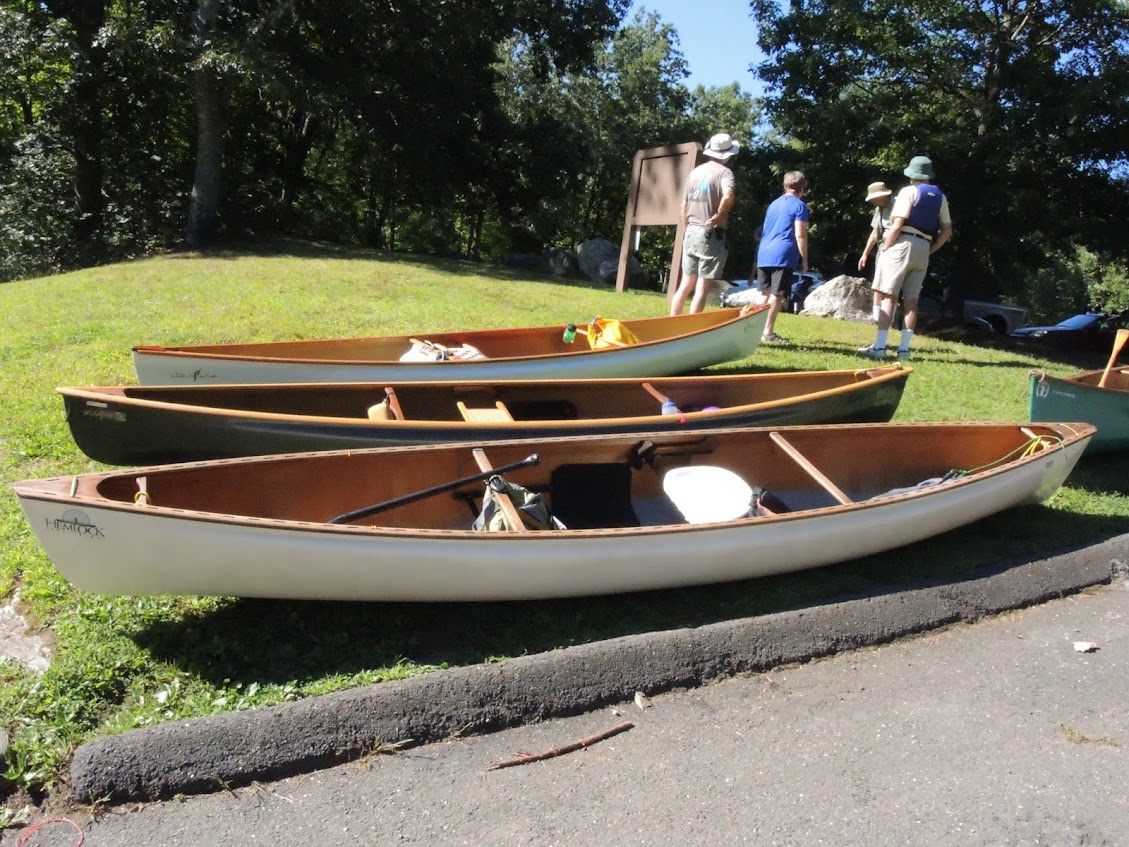 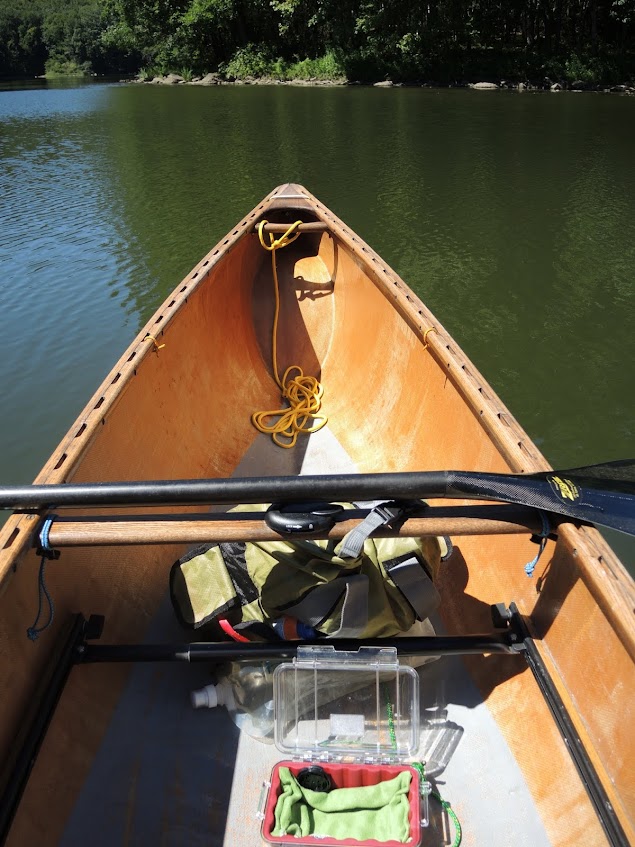 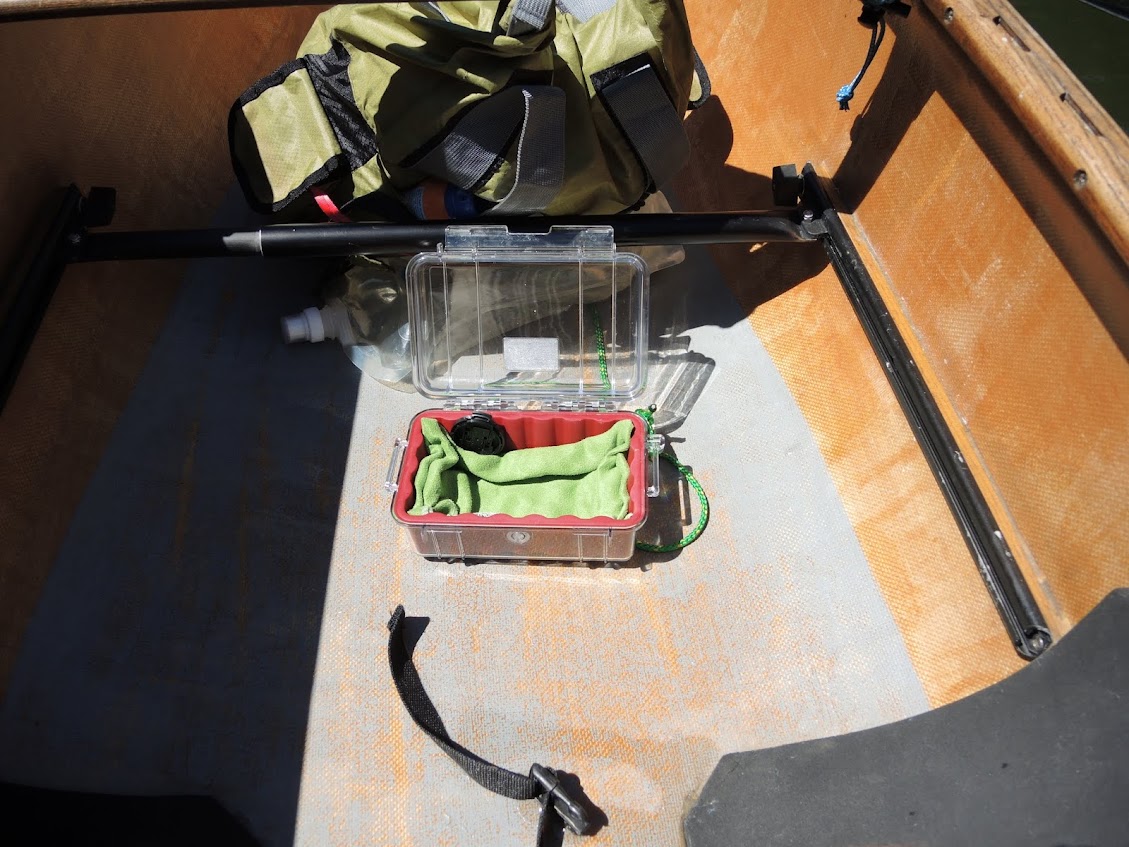