I have a nice carbon fiber ferrule I cut off a too long (290cm – what was I thinking?) DIY’ed wood double blade. 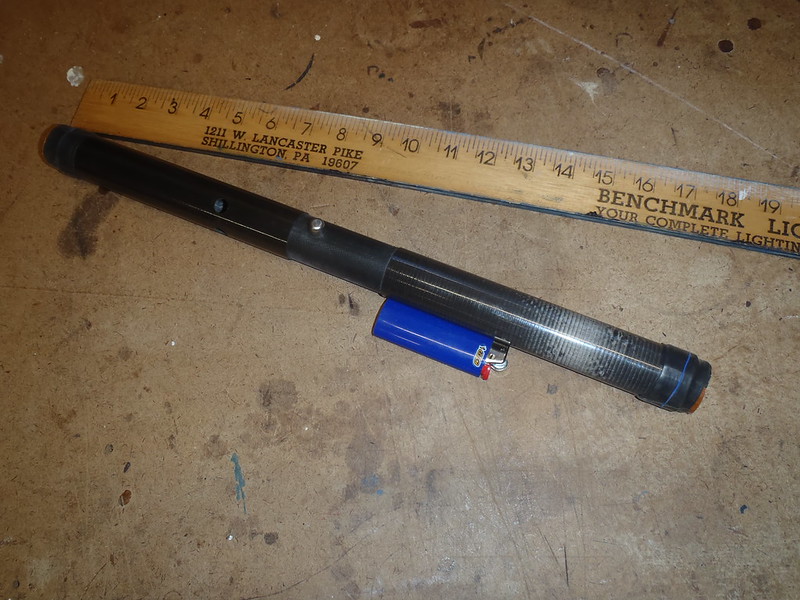 The ends of the wood shaft were epoxied at max length inside the ferrule tube. 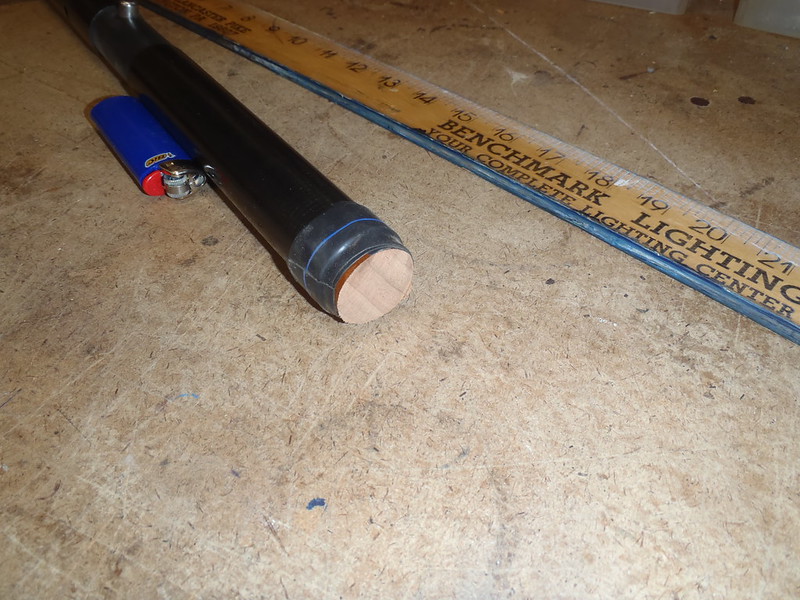 I am at a loss for how to cleanly remove the shaft wood without damaging or destroying the ferrule.

Run an eye screw in the wood plug ends, soak it in a pot of boiling water and pull maybe?

Ideas or suggestions?
A

Mike,
If you know someone with a decent sized Metal Lathe (large enough bore through the spindle
to pass the item) have them chuck it up and bore out the wood.
Larry S

Boiling water should do it though of course it would make the wood swell. Hot air gun?

Would the wood swell if you taped off the wooden end when it was in the pot of boiling water, or whatever you can do to prevent the water from touching the wood?

If you take the ferrule apart, can you also push the wood from the other end, as in banging that other end of the wood with or onto something of a smaller diameter than the carbon tube?

What can you tape with that won't peel apart from the boiling water? Heavy duty condom maybe!!!

To amplify my second idea, if the wood can be "pushed" out from the ferule button end, I visualize clamping the half ferrule in a vise, heating it with a flame to soften the epoxy, and then banging the wood with some sort of small diameter probe with a hammer to "push" the wood out.

What the hell, that ferrule is useless as nunchucks to me as is. If I destroy it in an attempt to unplug the exposed paddle shaft nothing ventured, nothing gained. And I’ll know if it works or not.

Some prep work – there is always prep work – eye screws in the ends for pulling, dowel piece cut for pushing/pounding inside the ferrule, insulated leather gloves so I can handle the boiled object of experiment. 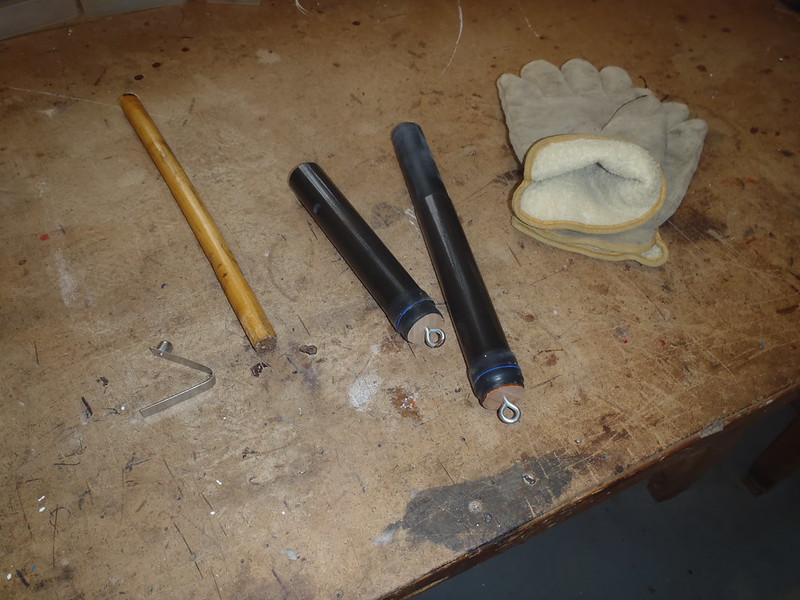 I removed the button clip, it doesn’t need to get boiled. And I didn’t want spaghetti flavored with a hint of old epoxy, so I turned to the battered pot I use for melting Fire-in-a-Can wax. As a preliminary precaution I left the ferrule parts sleeved together. Those pieces are very tightly sleeved, some carbon ferrules come with factory matching ID numbers. If boiling were to misshape the ferrule sleeves, that would be an immediate fail.

First glaring oversight failure. It is a carbon fiber ferrule with wood inside dumdum. When you try to submerge one end in a pot of water guess what? It floats! I added a weight to keep the wood shaft end fully submerged. 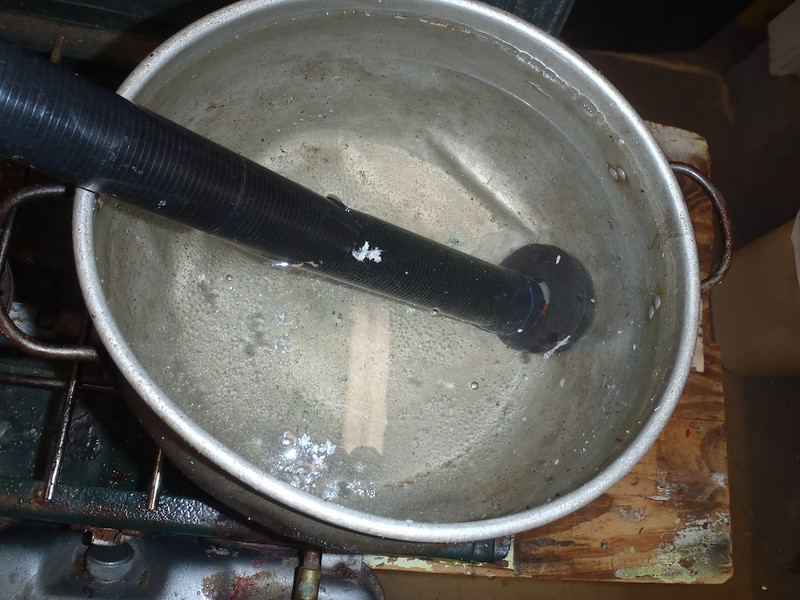 A half hour later, with a rolling boil, I gave it a try. The wood inside was unbudgable. I let it get to a rolling boil once again, pulling the eye screw while pushing, then tapping, then, screw it, forcefully hammering inside with the dowel rod. Bupkiss; I can at least take satisfaction that, when I sanded the shaft ends to fit snug inside the ferrules and epoxied them I did a helluva fine job.

Continuing attempts. Boiled for nearly an hour, until the Coleman fuel ran low. In case that long-boil worked I took the ferrule apart and submerged both ends. Yum, ferrule soup. Needs salt. 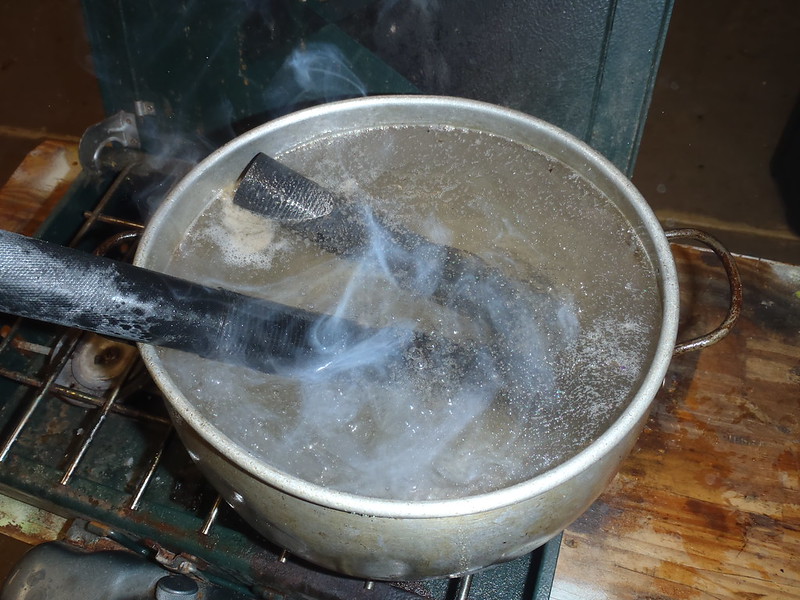 That was another nope. But y’all know how I am, one last try, the stove is out, the pot has water and the shop smells funny (residual wax). I refilled the fuel tank, boiled them for another hour and then let them seep for a spell in the hot water. Another nope.

While they were still saturated hot it was time to try the heat gun. Lots of heat gun action. Pulling on the eye screw while hammering with the push rod, the shaft remnants didn’t budge an iota. I tried grabbing the shaft end with channel locks and tried twisting while the carbon fiber tube was hot. No dice. 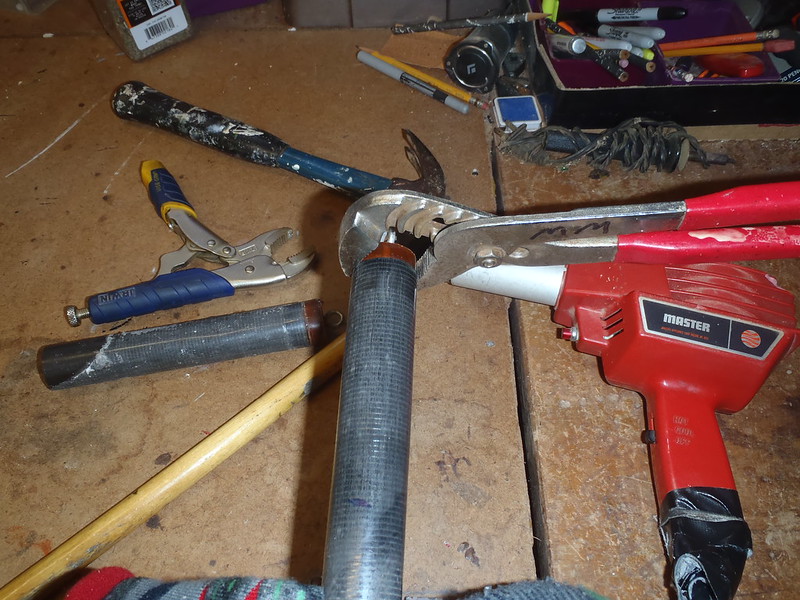 I have given up on a heat solution. It seemed like a possibility, considering “some epoxies can withstand temperature up to 100 ℃ ( 212 ℉), whereas carbon fiber reinforced carbon matrix composite can tolerate temperatures above 2000℃ (3632 ℉)”.

However “Carbon fibers by themselves have a negative coefficient of thermal expansion (CTE)–meaning that when they are heated, they shrink”.

Eh, having the carbon ferrule tubes shrink tighter around the paddle shaft remnants wasn’t helping my shaft removal cause.

The carbon ferrule reuse idea, and I’m not even sure it is a good one, was to make a take-apart pole, using the 15” long carbon ferrule and two 6’ long sections of wood for easier transport. Duckworks carbon fiber ferrules run $30.

We have several poles, and I’m not dropping $30 just to see if it works.

A failed experiment is still an experiment, and I learned a few new things about carbon fiber. BTW, even after long boiling the ferrule halves unsleeved they did not warp; they still went back together tight, snug and easy.

I haven’t given up, and may try drilling out as much wood shaft as I can, but I have funner projects to turn to.

Mike .... heating isn't the solution as you have discovered. that wood goes in for a max of 3" ... get it lined up on a drill press and bore through the whole thing leaving about an 1/8" all round .... then when you make the paddle, just use a "lesser" diameter there. I think that may the easiest solution
With twist drills go from small to large bits, till you get the size you want. Even better get a Forstner bit, they come in pretty hefty sizes that aren't pricey

Maybe you need some pet termites?

Seems like there must be a solution from the dissimilar materials angle. What if you "kiln dried" the wood (like, in a dehydrator or oven on warm overnight)? Would it shrink enough to crack or pull away from the sides of the carbon tubes? (Disclaimer: I know nothing about epoxy muffins.)

Mike McCrea said:
Carbon fibers by themselves have a negative coefficient of thermal expansion (CTE)–meaning that when they are heated, they shrink
Click to expand...

Unlike experimental physicists who actually have to touch and use equipment and tools, I was training to be a theoretical physicist, who only thinks about and writes things.

So, here are are three theories as to how you can expand a carbon fiber ferrule, assuming the truth of the quoted CTE statement:

Rather than paying me $30 for this valuable and (im)pertinent advice, feel free to spend it on a new ferrule or . . . 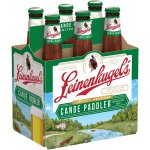 Just an FYI, that epoxy is not going to delam, it is not going split ... it is considered the best glue for a reason.

Mike McCrea said:
“some epoxies can withstand temperature up to 100 ℃ ( 212 ℉), whereas carbon fiber reinforced carbon matrix composite can tolerate temperatures above 2000℃ (3632 ℉)”.
Click to expand...

Willie likes to ask "what would a smart guy do?" Like negative thermal expansion, turn that on it's head and ask, what would Bevis and Butthead do? Fire. Fire. Fire, fire...heh, heh, heh.

So, once you are totally aggravated and ready to blow up your ferrule, consider burning it. I read that depending on type of wood, a campfire burns at about 1100F. Charcoal can get up around 2000F, so maybe don't let the ferrule sit in the coals. Possibly drill out as much wood as you can and then get a fire going inside the ferrule. Maybe hold it upright over a fire (tongs) and get that inner part burning. I have no idea if that will work. Seems unlikely, but something to do next time you are sitting around a fire. There might be some fumes, so stay upwind.

I read that cured epoxy doesn't burn. If it is melting, does that still count as cured?

Again, depending on the wood, the wood can start burning around 500F.

I had a closet-rod, two piece pole incorporating a CF ferrule. I still have the pieces. Under severe bending stress on the Rappahannock River, the ferrule popped before the pole. That pole has been in the fix-it pile for years now. If you'd like to have a fire-play test case, you can have it. 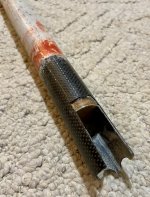