Got to go on a wee little excursion with my son - an easy 3 hr day trip to a pretty waterfall on the lower Oxtongue River near Dwight, Ontario. I've been here solo before and thought this would be an ideal introduction to future tripping with the boy. Up until now, he's been limited to about 1 hr of paddling time before wanting to get back to shore, so we've been puttering around the cottage lake.

This time, needed to make it a bit more interesting so I hyped up the adventure of going up a "wild river" to a "secret waterfall" where we could climb up the rocks and have a shore snack before returning. Wanted to get a little fire going once we got there in a homemade hobo stove and thought he'd enjoy scavenging for bark, dried moss, and pine cones for fuel. Figured it was important for him to be involved in the process so he helped pack his own gear but interestingly did not want to fish along the way, so the rod stayed at home. Matching Captain yachting caps (a gift from Grandpa) were necessary to complete the adventure wardrobe. 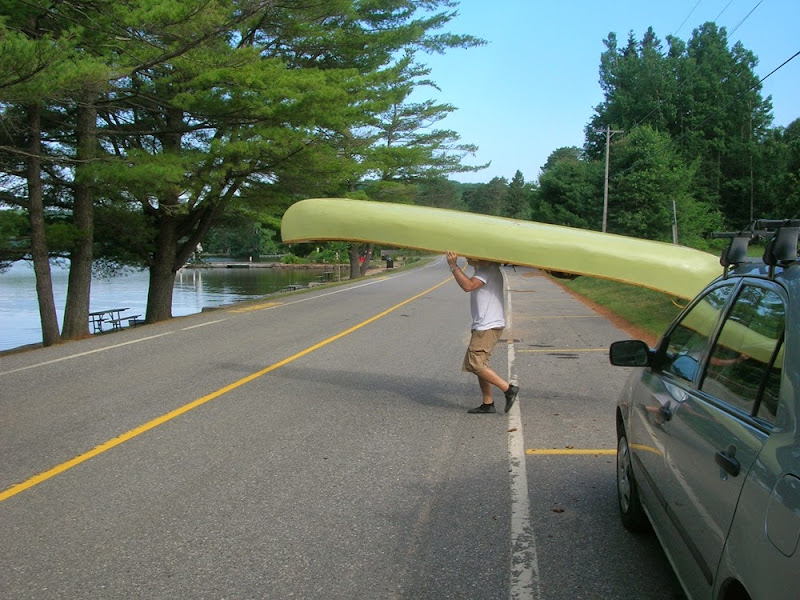 The only carry...across the road to the beach launch


Since this was a portage free route, I ended up packing the newly constructed wanigan full of goodies as well as the packbaset with some dry clothes and other items in case of a mishap. 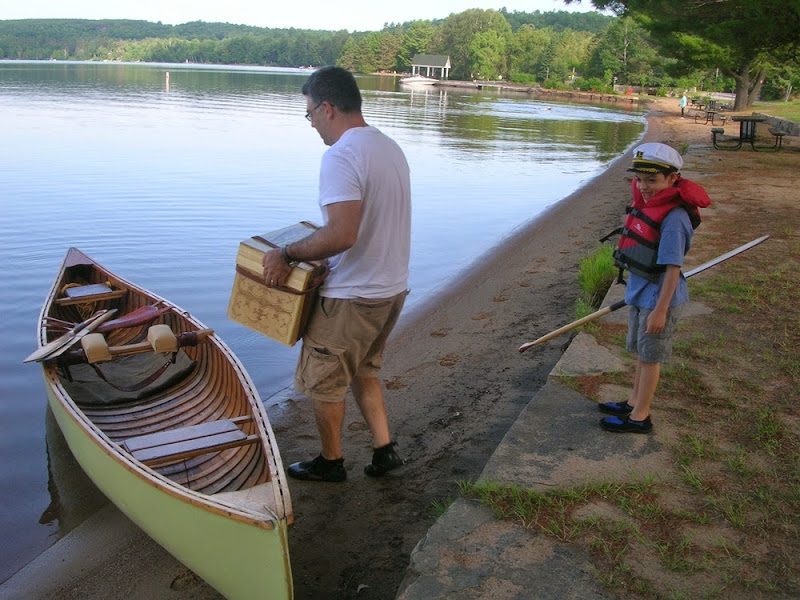 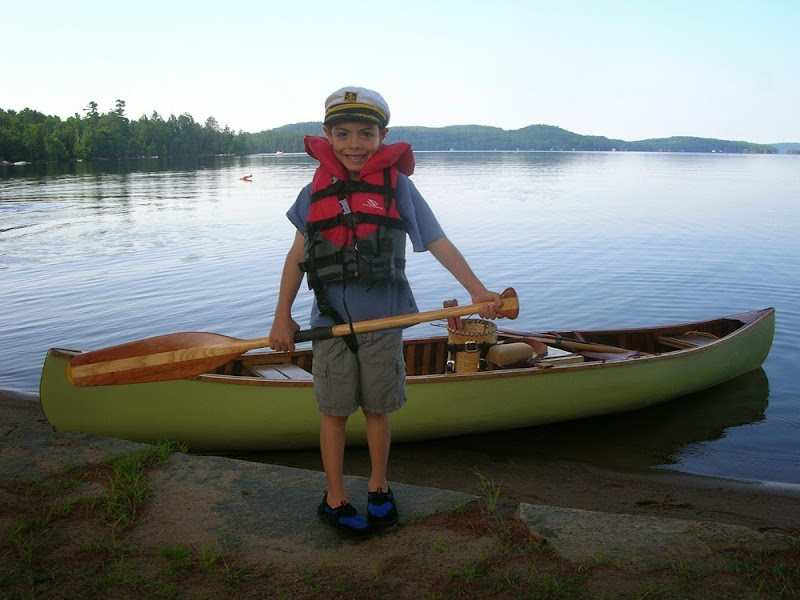 
The trip starts with a about 1 km paddle along Lake of Bays to the mouth of the Oxtongue River. The little guy is getting the hang of paddling and prefers the right side which is great because I prefer paddling on the left. 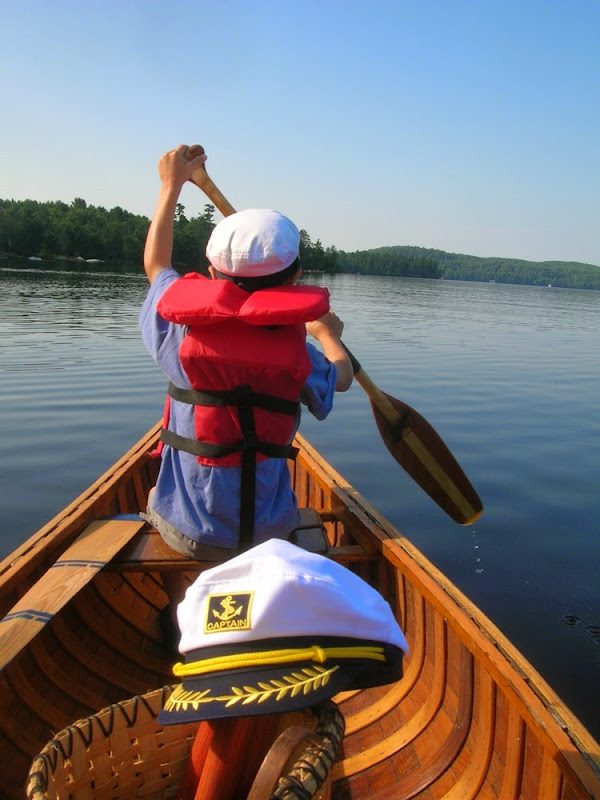 Across Lake of Bays


Wonderful still-looking waters greeted us at the river outlet. I say still-looking because there was a noticeable current that was manageable to paddle up but it was at this point that the bow engine decided he needed a break. 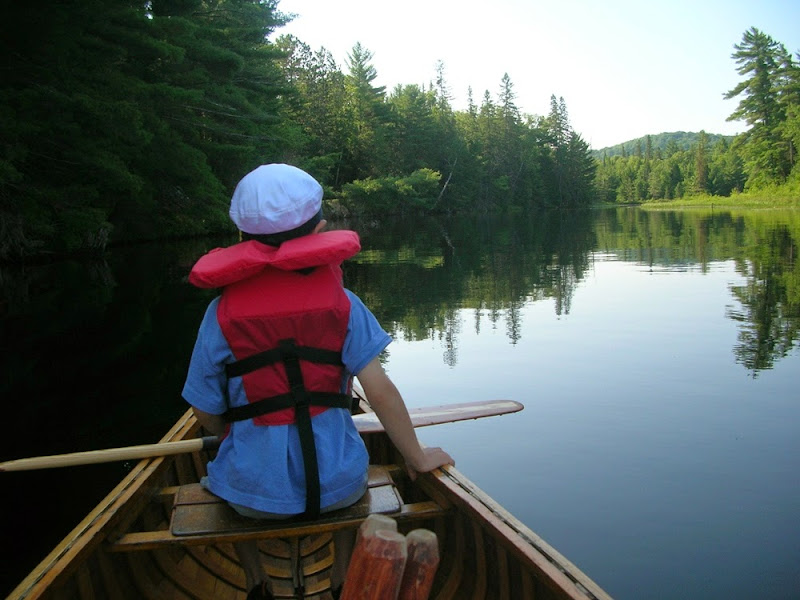 Mouth of the River 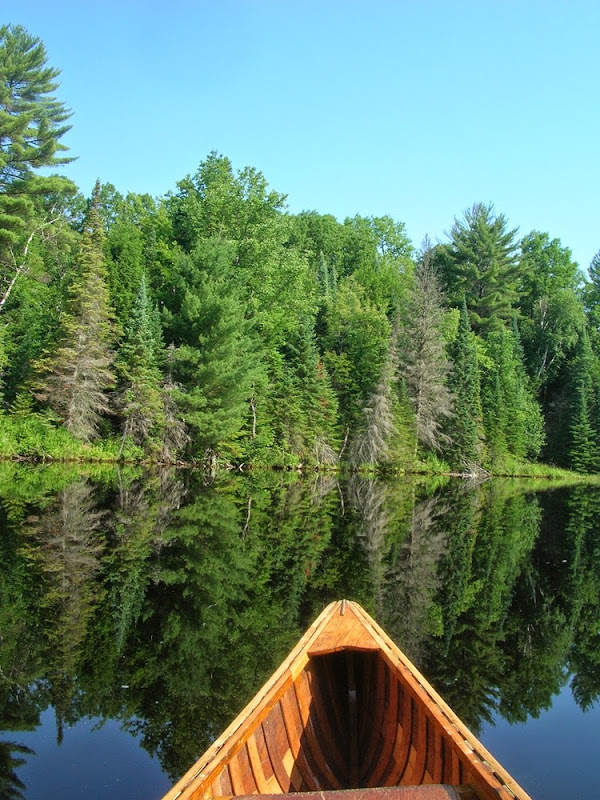 
I suppose at this age, there's only so much silence and stillness a 5 year can take, so it was time for entertainment. He had packed a bunch of small toys in anticipation for the trip and now took them out. One of the neat things he discovered was that the space between the canoe ribs were excellent tracks for his race cars. He'd hold them up right below the gunnel and let go. Gravity and the deep, boxy canoe design would shoot the car across to the other side of the hull. There's Lightning McQueen about to race down steep slope. Plenty of paddling time was now spent setting up cars to drag race side by side. When he tired of this, his toy helicopter was used to chase away the dragonflies that would hover around the boat. 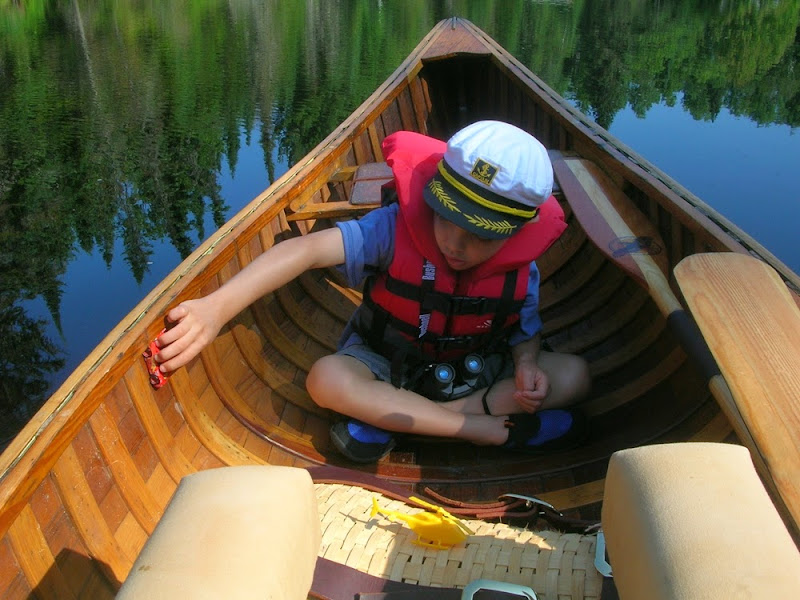 Drag racing between the canoe ribs


The anticipated shore lunch by the waterfall never materialized. He got too hungry and insisted on eating right away. The wanigan lid made a perfect tray for his lunch and beverage. 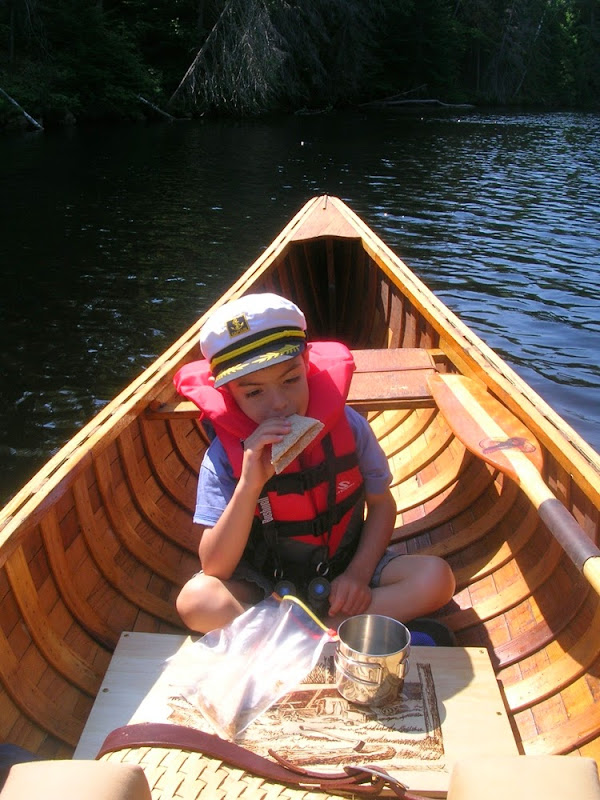 Lunch in the hull rather than on shore


After seeing the artwork on the lid, he wanted to draw pictures on the flat surface too. So next time paper and crayons will be packed as an extra distraction. Soon the roar of the waterfall could be heard. Things were packed up and the little Captain took his place in the bow seat again. You can just make out Marsh's falls in the distance. 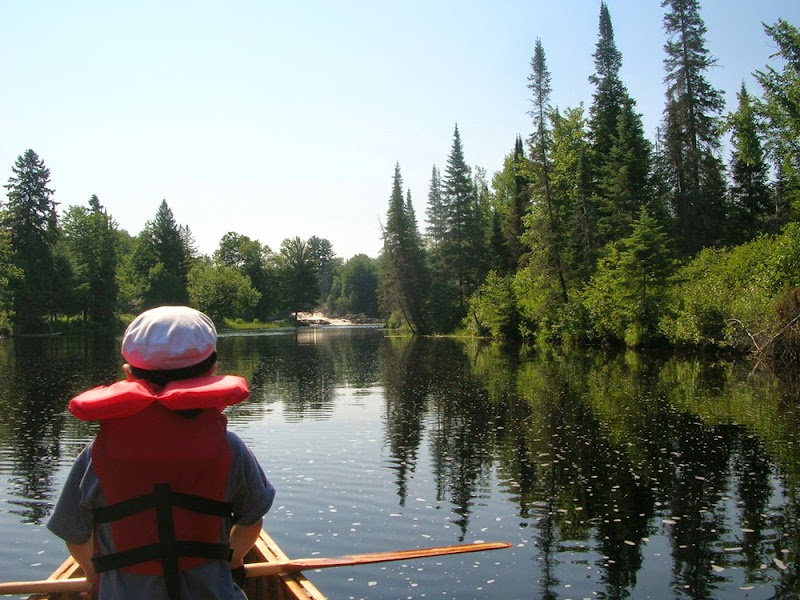 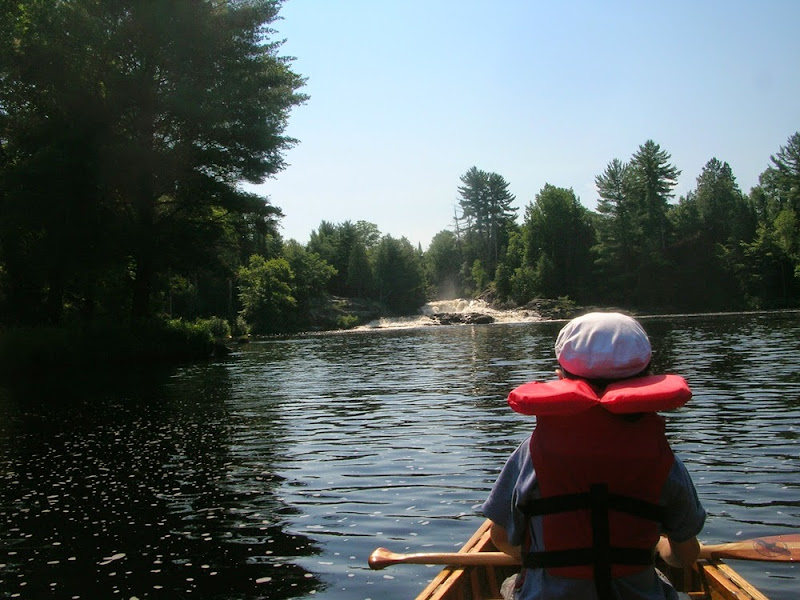 Water levels were high for this time in the season. Plenty of mist and spray. The waterfall is usually tame enough for people to swim in the pool that separates the upper and lower cascades - not so this year. There's private property on the left and the usual landing spot on the right was too flooded with strong currents to go on shore. 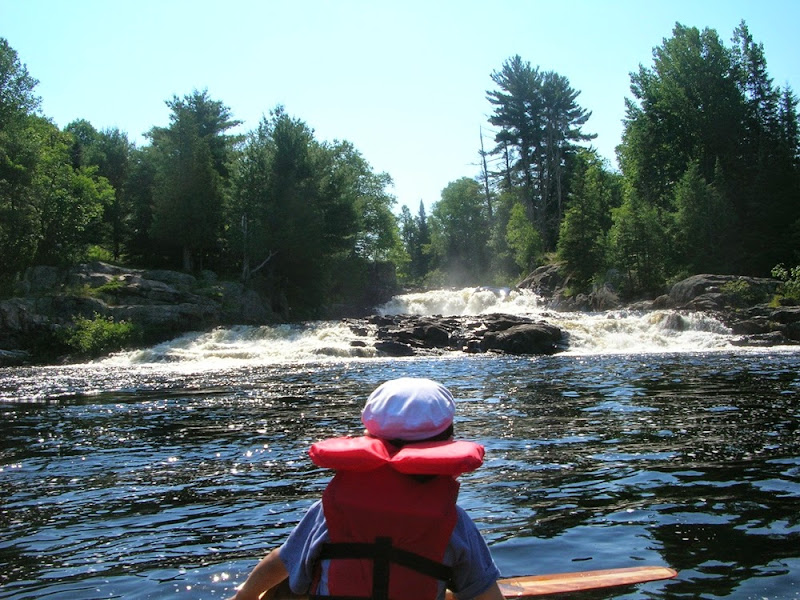 After dabbling around at the base of the falls and taking more pics, it was time to head back. However, after not helping with the upstream paddling at all, the Captain was informed of the need to help with the downstream propulsion in order to get a surprise treat. Did we ever start moving after that! While he was busy maneuvering the boat, some marshmallow treats were prepare on the wanigan lid. 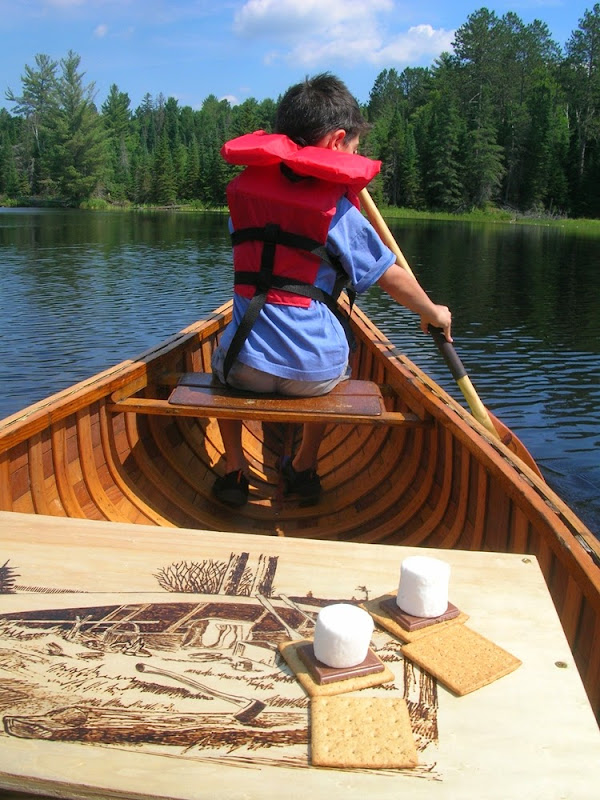 Fuel for the bow paddler


On the paddle back he practiced some French songs learned this past kindergarten year. Singing helped immensely with the paddling rhythm. That's the secret to getting kids paddle harder, I suppose...singing and sugar!

Since I've always been a solo paddler, it was great learning experience for both of us to see what worked and what didn't. I consider it a success because by the time we ended up back at the launch point, he asked about when we could go out for another canoe adventure again. Hoping that next year, we can do an overnighter finally and eventually he'll be as accomplished as all of Memaquay's kids in the Outer's program.

By the way, any other tips or stories on tripping with young kids would be appreciated.

What a great way to get him hooked on canoeing. I'm glad both of you had fun.

Thanks for sharing the photos and the story to go along with them.

My son was not too keen on paddling. When he was 10, I took him on his first trip, an 8 day loop on the Steel River. He did pretty well, but wasn't too keen to do it again. Over time, the experience settled in, and he went on most of the Outers trips. He's now 27, and caught up with work and such, but we usually get one trip a year in, even if it's just an overnighter. Making it positive is the key to long term success, looks like you have all the right ideas!

What a great day out Murat! I'm glad your 1st mate wants to head out again. The s'more sandwiches were a nice treat!
I was more nervous than our son when I finally took him along for a first trip with my friends. When I saw the joy on his face I knew it was the right thing to do. Our children are all grown now, and have many wonderful memories of family tripping. It looks like you're well on your way to making many wonderful memories of your own.
Thanks for sharing your father and son trip report.
O

What a treat first thing this morning! Your bow paddler is just about as cute as the law allows! And Dad, you've really thought out the trip well and when things changed on you well, you just adapted to the new situation. Well done! Although it wasn't needed this time your forethought bringing extra clothes is very, very wise.

About suggestions: You'll need to translate this into canoe lore to use it but something that worked for my daughter Mary, when she was in second or third grade. She had helped me with the training of my retriever (lab) and really for a little kid she was pretty dog savvy. We three (man, dog and kid) did a show and tell at her school where she handled the dog and I threw the bumpers. We worked up a little spiel for her in advance and along with the field demo, it was a resounding success.

For her classmates the idea that a dog could be handled with precision to perform tasks was beyond magic. And by Mary! goggled eyed glasses wearing girl with pigtails, was mind blowing. Especially to the little ruffian boys. She came out of it with a considerable boost to her ego. Which with those danged glasses she need just then.

The idea of being able to impart valuable knowledge to a peer, adds quite a bit to the little kid and as a byproduct, knowledge of canoe and how it all comes together becomes prized for it's self as a result.
This could be as simple as showing a playmate one on one or at a school setting. I think they call that a win-win.

Thanks for sharing this with us Murat, Rob

You are very blessed. Thanks for the report and pictures. I really liked his hat.

Looks like you did a great job Murat!
You must log in or register to reply here.