Any interest in a group paddle in the Tetons?

When I read your first post, I was thinking you were travelling to WY on your trip. but I see you are based there. How is your snowpack?

What's the itinerary for the five days of the trip? Is it all on Leigh Lake, which is fairly small?
P

DanOver, I live in the Bighorn Basin. We average 6 inches of snow a year. We got twice our usual amount of snow
Last edited: Apr 14, 2018
P

Man, I'm being held hostage for that time frame right now for something we're not even sure is going to happen.

Here's a little something to keep the excitement up.... 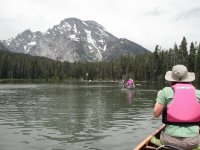 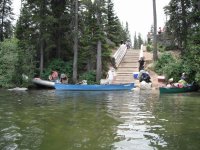 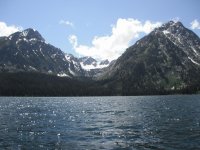 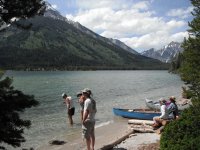 The computer keeps eating my responses. Let me see if this goes through.
P

Yay! I mentioned the trip at a meeting and I now have a lady from work and her husband going along. I asked my boss, and she is interested, but she has to wait to try to schedule with her husband. I
P

I think this site can handle six, or maybe more. Steve in Idaho, you may know. I love your pictures, that
P

Once upon a time I lived in Victor Idaho and paddled it all out there. Be careful about being out after 11:00 as all those lakes get VERY windy by that time on most days. Not many overnight opportunities although Shoshone Lake in Yellowstone is a good choice. Honesty, I wouldn't travel there to paddle exclusively.

If you want a nice 3 day trip, Leigh lake (Tetons) has nice backcountry camp sites available. If you want a nice peaceful 5 day trip, Shoshone lake is a great choice. You have to pull your boat a mile up the river channel but that keeps out the riffraff. If you want an excellent 7-10 day backcountry canoe trip, Yellowstone lake is the ticket. Nearly 80 miles of backcountry shoreline with excellent day hiking from most camp sites. Take Yellowstone lake seriously though - its a big one and can get very nasty when in the mood.
P

Black_Fly, I live about 5 hours away, and just wanted a pretty place to paddle, and I succeeded. I had a great time. The campsites were beautiful. I had 2 pine marten go through camp one day. It might have been one that went through twice, but the first one looked tidy, and the second one looked scruffy, so I’m guessing they were different animals. I got to paddle for a few hours each morning, a abefore any wind came up. My sites were on the back bay, though, so if I’d wanted to paddle some, I’d have been ok. I saw a moose with a calf, and those at my neighboring site said that a bear had come by just before the moose. I missed it, though.

Holmes375, I hiked in on the Lewis Channel Trail over Labor Day (and went out the Dog’s Head Trail). I spent two nights at the site to the right as you exit the channel. It was also a beautiful site. It is an odd site in Yellowstone, in that there are two sites combined... one for hikers and one for boaters. The first night I was alone, and the second night two men paddled in. The wind had come up, so we sat at the kitchen area and chatted for hours. They had a really nice boat, which I cooed about. They also had stories about pulling their boat up the channel. I have a small, backpackable, inflatable. I’d like to hike that in next year, and play in the channel a little, and if it’s calm, play out in front of the campsite. Lest anyone worry, I’m saying *calm*, and close. I saw the power of the lake when the waves were up. I’m thinking of doing a hike around the lake next summer. I got to the geyser basin a couple of summers ago, and it would be nice to tromp through that again.

Glad you had a good time. That Snake River brewery on the Idaho side is almost worth a 5 hour drive. Pine Martens can be bold. Nothing beats a moose sighting near camp.

I had totally forgot that I posted to this topic. My mind is like a big sieve.
You must log in or register to reply here.

P
Reservations in the Tetons!