Thanks for posting the trip report. I enjoyed it. It brought back memories of my past trips to the area and got me more excited about my planned return this year.

Terrific report of a sweet trip, done in style. The area at the end of Fish Pond is a favorite. I've got to get back there sometime soon.

Patrick Corry said:
Barry, Thanks for the suggestion of the Whitney Loop. It's on my radar, consulting Cilley's book. Your picture of the pup in your canoe is a fine one; the deck detail is nicely finished with tapered inhales and looks very aesthetic! I've admired your canoe in the pictures you have posted. Pup is pretty nice too; I would enjoy having a furry pal in my canoe for a trip.

Both of my trips to the SRCA have been pretty much people free. The first time in November I had the same concerns as you. Every trailhead I passed along the way in Keene Valley, Keene, and the Cascades Lakes area was jammed with cars so I assumed the canoe area would be as well. That first trip I saw no one! 18,000 acres of ponds and woods.... and it was ALL mine. This trip I waved at one guy at his campsite, observed a party camped on a distant island (with shrieking little kids in the water- but that's OK), and only encountered the one older gent like me on the carry trail. I would highly recommend that you go for it.

Awesome. that doesn’t sound like its too crowded considering the time of year. Raquette River Outfitters suggested I wait to late September or October. This works for me because I try to avoid the heat and bugs. The boat is a 16’ prospector and 35” wide if I recall. Probably a bit slower than yours based on your sketch. The dog was a fine paddling companion for 13 1/2 years. I have started a new chessie and she is doing great in a boat. The fall trip to ADK’s will be her first week or more trip. She has an overnight canoe trip behind her and Dolly
Sods next weekend.

Friday morning I awoke to an overcast, but not rainy day. I had another great night of sleep, something which is not usually true for me- I tend to toss and turn trying to get comfortable. And then there's the usual (for an older guy like me at least) several times a night ritual of getting out to relieve myself. I experimented with a more comfortable pillow, actually two; a Nemo Fillo inflatable pillow which I like, but with an additional foam filled packable pillow on top. Since this isn't a backpacking trip where bulk and weight is more critical, I decided to go for comfort and it worked.

The usual oatmeal & coffee routine continued, and then having packed up I made the 10 minute paddle over to the carry to Turtle Pond. Along the way I was entertained by a pair of loons which stayed very close to my canoe & the shore, and then it dawned on me; they were probably staying close to a nesting site and were more concerned with my proximity than with their own personal space! A little bit chagrined, I realized my mistake and left them alone with their private pond domain.

Arriving at the Turtle Pond carry: 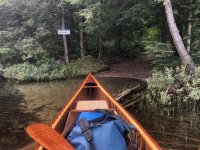 Being honest, I was a little bit daunted by the prospect of this carry. I had read some, admittedly way out of date, reports of boggy conditions and a beaver pond somewhere along the way. In fact, the first third of the carry was a reasonable uphill carry to the height of land where I put the canoe down and went back for my pack and returned to the canoe. I could see from my map that all the elevation lines I would cross from here on were downhill, so up with canoe again and I headed downhill all the way to the beaver "pond". There were a couple of blowdowns along the way, one of which was quite daunting with a large tree across the trail on a steep side hill, but as usual with a little patience and care I negotiated the spot without incident. The beaver pond which I had feared to be a shoe-sucking bog turned out to be a pleasant open pasture with the trail just skirting the edge. The trail was reasonably firm and I quite enjoyed myself. At this point I let the canoe have a rest in the grass and again turned uphill to retrieve my pack back at the height of land. Returning to the canoe for the final third of the carry, the remainder of the trail was a gentle stroll through an open pine forest and before I got tired I saw Turtle Pond through the trees. Wow; what a pleasant surprise the carry had been. I had been prepared for a horror show and instead it was fun!

A natural rest along the carry: 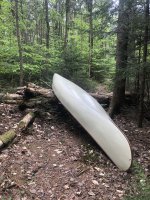 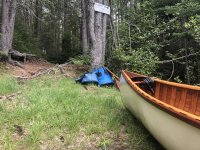 Ready to roll on Turtle Pond, with a brief side trip to see the connecting stream to Slang Pond. I'm wearing my favorite shirt from L.L.Bean. It's old and comfortable, and some of you guys may know the expression, to turn the collar?.... When a collar wears through from age, my Mom taught me to unstitch it, turn it around, and then re-sew in into place so that the old frayed part is now under the fold! I'll probably get another 20 years out of it. Goes on every canoe trip with me! 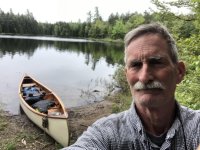 I was a little sad that my little trip was nearly over. I only had to paddle the length of Turtle Pond where I spotted this venerable old white pine, apparently struck by lightning gauging by the long vertical scar in it's bark. 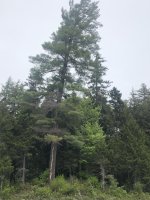 Arriving quickly at the end of the pond, I spotted the outlet pipe from Hoel Pond and easily carried my canoe and gear over the old rail bed. 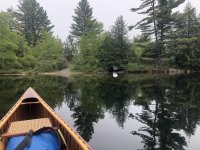 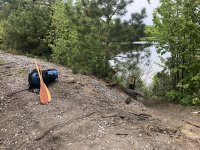 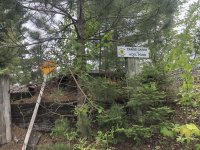 With the trip nearly over, I decided to paddle around to the northeast shore of the lake and into Rainbow Pond to have a look at some of the cottages and boathouses that dot the shoreline in that area. Most appeared to be shuttered from winter still, but with Memorial Day Weekend coming the following week I imagine the lake would become busy for the summer. All that remained for me was to continue clockwise around until I spotted the takeout, but I dawdled... not wanting to be done. Eventually I came to a carry landing with a sign indicating a carry to Polliwog Pond and thought, "this can't be my takeout", so I kept paddling for another long while until I realized there was no more shoreline left in which I'd find the takeout. So, now I paddled back the way I came- into the wind this time- and at the "Polliwog" takeout I stepped out and once I stood up I saw my truck parked above the steep bank. 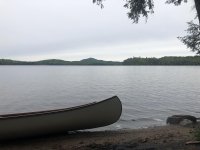 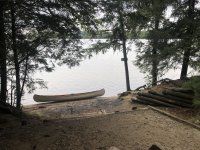 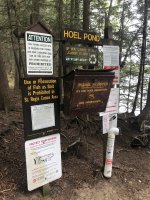 So ended a wonderful trip. Couldn't have asked for a better one. Next time... maybe Long Pond, Pink, Little Pink, Ledge, and Mountain Ponds with a side hike up to Long Pond Mountain??? Thanks for following along.

20+ years of Quetico and BWCAW trips and this looks so different.

Lovely trip, lovely photos, lovely canoe. I want to steal it. Thanks.

Great trip and report. Thanks for sharing it.

Glenn, my canoe is a sweetheart for sure. I was fortunate to stumble across her on Craigslist, and even ignored it for weeks because I wasn't looking for a w/c canoe. Eventually I just gave in to her good looks and was rewarded with a fine paddling canoe I didn't even deserve. I'm very fortunate! Thanks for your compliments.

Way to get out there in that W/C canoe Patrick, it's a beauty.

That was a very good TR Patrick, great pictures and informative, I enjoyed it. I have been to that area a few times and always had a good time. That's a really sweet looking canoe, I'm glad you took it on this trip. Thanks for sharing, well done.
You must log in or register to reply here.

NOT... the Whitney Wilderness Loop (as I had planned)

Furthest you have carried to launch a canoe?
2