Not really into fishing but spend a lot of time pulling trash out of the water. Sometimes you can turn trash into treasures. 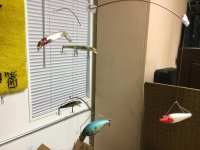 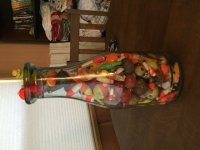 Only thing in my "tackle box" (usually a small paper bag from the hard ware store) is a bunch of standard jigs. We use minnows on them, or when back on a multi-day canoe trip, rubber tails, or when you forget those, flagging tape. I'm lucky to live in an area where the flagging tape jig will produce a multitude of walleye. I used to be a pretty serious fisherman, still have all my fly rod and fly tieing stuff, but I basically only fish now when I want to eat fish, so the jig is easy, cheap and it works.
W

Bread balls on the end of a barbless hook My daughter 20+ years later still talks about all the blue gills (sunnys) we caught and released at the local pond. Most fun fishing I ever had.

The better the fishing is, the less the patterns matter.
Click to expand...

Yep... I've caught lots on days they were biting, using some very cheap lures (like, a generic two dollar spinner which outperformed a much more expensive "catch guaranteed" plug).

Here's a place where the fishing's cranked up to eleven... notice the lure selection, or maybe more correctly, lack thereof. Just happened to see this today, I enjoyed the screaming as much as the catching.

Based on the lures I've recovered in the past week it looks like around here you want something that wiggles in some combination of gold, black and fluorescent orange.

Personally I've always liked the lures that look like frogs; I think they're cheerful. 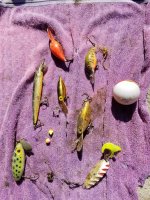 Well this past weekend at our favorite early season Gayling hole the Copper John nymphe was the best and managed half a dozen good size fish!!

I haven't fished in quite a few years, but I have used and liked original Rapalas a lot in the past. Mepps spinners too. I forget the model but there was some kind of Yo-Zuri plug that worked great on stripers in the Chesapeake Bay.

I did a little fly fishing on backpacking trips and loved it. I can't say I have favorites though. I just googled what the locals used and took some of those I suspect that when/where I was in the Sierras almost anything would have worked. The trout were plentiful and hungry and almost any reasonably competent cast to a fish resulted in a hit. That was in the little streams any way. No one else seemed to fish in those little streams. In the lakes where everyone was fishing I couldn't catch anything and didn't see anyone else catch anything either. I did also catch some bigger trout on that trip during impromptu road stops at bigger streams on the drive too and from the trail heads.

The fish in the streams were small, but fun to catch and delicious. I could often stop and catch enough for lunch in a few minutes.

I plan to get out and try some local fishing again here after a long layoff. I have not found any of my tackle other than my spinning and fly rods and some fly fishing stuff. My tackle box and contents apparently didn't make the move or are packed away somewhere that I have not discovered.
Last edited: Aug 27, 2020

When I was a kid, growing up in Sacramento, California, my father often took me on backpacking trips into the coast mountains of Northern California. We usually went to Bear Wallow Creek, where his father took him when he was a young boy. Bear Wallow Creek flowed into Stony Creek, which flowed into the Sacramento River. I fished with a spinning rod, and used natural bait. I would turn over rocks at the edge of the stream to find hellgrammite nymphs, which would eventually turn into Dobson flies. I also caught stonefly nymphs. Both nymphs were deadly on Rainbow Trout. If I didn’t catch anything by the third cast, it was time to move on to the next pool. As I grew older, and took some of my friends to Bear Wallow, one of them, a fly fisher guy, ridiculed me for being a “meat” fisherman. But I caught fish, and he didn’t. He was still ridiculing me while dining on my catch. While fishing on lakes in The Sierras of northern California, I would chase down grasshoppers.. They were effective as bait, but much less so than hellgrammite nymphs.

When I started canoeing in northern Canada, I tried to pack light. I take three Mepps spinners, two gold, one silver. I have caught pike, lake trout and grayling with these spinners. Usually fairly easily. But then again I have caught grayling with a bare hook. Reading this thread, it seems there are many ways to skin a cat, as well as many ways to catch a fish. I don’t know anyone who has ever skinned a cat.
Last edited: Aug 27, 2020
K

Oh boy.....favorite lure. By species, water clarity, temperature, sunlight. So many variables. At any given point any of the hundreds of lures I have could qualify.

But - one thing I have learned is that when you decide to buy a lure and have selected the one you like, buy two. The one you buy might be a great producer and when you lose it you will wish you had another. Seemingly identical lures can also produce different results. Back when plugs were wood you could buy identical lures that acted completely differently - sometimes one would out perform the other by a mile.

Now with plastic lures and modern manufacturing techniques you don't see this as much. But with painted spoons you can often times find one that performs better than the other.

To narrow down your lure purchases and improve your results, start a log. You will soon see which lures perform the best for you, and re-reading will provide you with reminders based on conditions.

And when you come across those old wooden plugs and patina'd spoons (provided their not way overpriced) pick those up. They are fun to fish and often times they are something the fish don't see. This can bring good results.

And mix up the application. There are three dudes from CT that gave me all manner of s*** when I pulled out Daredevle's to fish for steelhead. One hour and 45 mins later I left after going 5 for 7. And they hadn't hooked a thing.

Same as Mem....yellow jigs and twisters is all you need here for supper and an evening or day of fun fishing.
O

A few of my favorites. Cotton Cordell Big O in crawdad color. That one is probably my number one go to lure. For a long time, I only fished with a black lead jig and 3” Power Bait Grubs in Chartreuse and Brown. Now I don’t see that color available any more. Another lure no longer available is the Walleye Assassin in Glow. Wall Mart always have bag as and bags of them, then they disappeared. I think I have 6 or 7 bags of them still. As others have mentioned, Mepps in all sizes are proven producers. 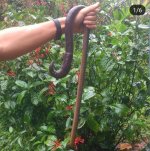 just the one
L

That ain't no Walmart Worm!

Green pumpkin tube...or a yellow twister tail...or a rooster mepps spoon...hell, do I have to have a favorite? The jointed silver shad rapp has alway done well trolling...probably couldn't live without green pumpkin tube, though.
You must log in or register to reply here.

G
One or two Lures to Rule Them All?

A
Wenonah Wilderness vs Prospector 15