What is the Proper Way to Solo Paddle a Tandem Canoe?

My first thought is that the boy is paddling into the current upstream. I suspect that from looking at the vegetation and the water pile-up splash at his paddle blade. Paddling from the extreme bow is the best way for him, at his weight, to make upstream progress efficiently without the loss of muscular energy and forward vector velocity to yaw correction strokes.

First, his maximally forward center of gravity position renders makes it maximally likely that his bow won't yaw and that the canoe won't pivot downstream. By moving his weight as far forward as possible, he is maximally pinning the bow into the current to prevent yaw, just as shifting one's weight as far forward as possible would pin the bow into a strong wind if going upwind and preventing leecocking were the objective.

Second, the further he and hence the canoe's pivot point were to move aft in the canoe, the more likely the current would yaw the increasingly unweighted bow and tend to pivot the canoe, out of control, downstream. Sitting in the stern, as the ultimate contra example, would result in the least upstream vector control, because the canoe's pivot point would then be at the stern and the tendency of the bow to pivot downstream would be at its maximum.

Third, from the extreme bow, the boy can paddle up-current with the least possible time, force and energy wasted on stroke correction, since there will be virtually no forward stroke induced yaw to correct. Being right up in the prow, he can literally stroke along or very close to the keel line, which will impart almost no yaw (turning moment) to his forward strokes. No C, pitch, J, or loaded slice return will be needed to correct yaw, and hence all muscular energy will be focused on forward vector propulsion and none will be wasted correcting horizontal yaw.

Compare if he were sitting in the stern. Massive pivoting yaw would result from the down-sweeping current upon each forward stroke unless a huge amount of muscular energy were expended to implement equally massive yaw corrections, which would waste forward vector energy and forward velocity.

Finally, the boy is light enough, and the dugout is heavy enough, for him to sit up in the prow (stern seat backwards) without cantilevering the stern ridiculously high out of the water. If he were much heavier, the stern would become too airborne and the LWL would hence become too short for him to paddle as efficiently, because hull speed = 1.34 x √LWL. A heavier him would probably move further aft, possibly to bow seat forward, to maintain some fore-weighted bow pin while lowering the stern back into the water to increase LWL and forward hull speed.

If the boy were paddling downstream, he might change his position to further aft in the canoe, even at his light weight.

We used to race canoes from the bow like that. So I think he's racing. Probably a gunnelling race next.

I think I may be the only one who thinks the boy is traveling downstream. When I look at the partially submerged vegetation it all seems to be leaning in the direction of his travel. The muddy water, plants protruding through it, and absence of a river bank suggest flooded conditions. The current can be quite strong then, although it isn't always apparent at the water surface due to washed out river features.

I fooled around quite a bit last season poling a local river. I learned quickly how important it is for the up current end of the boat to be trim light, regardless of direction of travel. Otherwise sometimes slight, misalignments of the canoe with current resulted in a quick, unplanned 180. I guess the wonderful photo of the boy paddling what I assumed to be a purposefully trimmed boat reminded me of poling an empty tandem in current.

In any event, another great thread! Thank you Glenn for initiating it. I like the way you keep us "thinking".

I decided it was upstream based on careful examination (blown up) of the tree trunk that is up against the standing tree. I don't see how it would be there if it was downstream. I'll admit it was quite a while before I decided as the lean of the trees seems to indicate the opposite.

Glenn's analysis fits perfectly with my experience wading my canoe through rapids, when going downstream you have greater control if you are holding the boat in the stern area while when going upstream you want to hold the boat by the bow (and not just because it's easier to pull against the current as opposed to pushing).

I have paddled my Discovery 158 from the front seat like this. The situation (more than once) was out fishing, caught by an unexpected sustained high wind which raised 2ft-plus waves on the reservoir. It was a headwind paddle back to the put-in, against the waves, with occasional gusts slapping the boat around (in the dark, uphill.. ;-) . Paddling from the front seat facing back is the way I usually do it but the boat was uncontrollable in this situation. In the front seat facing forward, there's not much need for correction strokes and all the effort can go into forward strokes. It's also possible from here to use crossbow and forward correction strokes that keep the momentum going. The weight up front also works for better tracking.

That does not sound fun.

it was the least amount of fun I've ever had in a canoe ;-)

DougK said:
it was the least amount of fun I've ever had in a canoe ;-)
Click to expand...

They say a bad day in a boat is still better than a good day at work, but I don’t agree!

I've seen Natives paddling similar canoes from the bow before on TV, so I don't think it is that uncommon. My guess is that is where he would paddle from regardless of the conditions. It may be the position that can handle any and all conditions of wind or current, eliminating the need to move around in the boat to adjust trim.

rickr, the wake shows he's going up stream , or if he is going downstream it would have to be extremely fast to cause that downstream wake.
paddling from the bow causes the stern to weathervane, just like in a strong headwind, keeping him on track

Next time you are paddling solo up a winding fast flowing stream trim the canoe and give it a try. Think front wheel drive as you pull your way around obstacles and sharp turns. Been there done that and its a real winner.

I tried paddling the 16 wabnaki I made while sitting in the back seat. Popped the front up enough it didn't track very well. 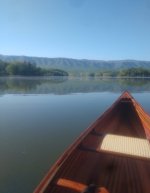 Then I got up and sat in the front seat and faced the stern. Handled better but the center thwart was a bit of a nuisance. 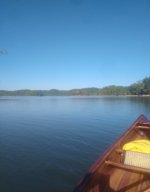 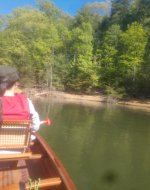 Here is my preferred method to solo a tandem. Obviously good tracking is not a priority for me. I prefer what I call a "lively feel" that you get with a light bow 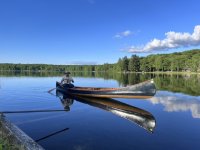 I guess I'd do it the same way I'd ride a tandem bicycle solo, not very well.

lowangle al said:
Here is my preferred method to solo a tandem. Obviously good tracking is not a priority for me. I prefer what I call a "lively feel" that you get with a light bow View attachment 131172
Click to expand...

I watched a guy try to impress his gal who was on shore. But he had a grumman. And a breeze came up and away he went. That is just before in he went.. Nice bottom.

I hope he got the girl.

Funny thing is I almost had the wind blow my downwind gunnel under water while leaning away from it while kneeling amidship, in that same boat this week.

It seems counterintuitive but bad things can happen leaning away from the wind. Unless you need to lean to keep waves out, your boat will be less affected by the wind if you stay upright or even lean into it.

He's probably already better at paddling a canoe than any of us ever will be.
You must log in or register to reply here.