The benefits of using a two foot fishing rod. 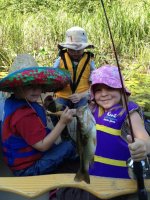 Feel free to mock me, but I use 2 foot long fishing rods when fishing from a canoe. Here is why:

1. They are relatively cheap. This means both inexpensive and simple. A "Dock Defender" can be purchased at any Wal-Mart for less than $9.00, and comes with an adequate closed face spinning reel and some line. It is ready to go. When your daughter inexplicably drops it over the side, you have less reason to scream obscenities. When your wife slams the cargo door on it, you don't feel the need to file for divorce. You just swing by Wal-Mart and pick up some replacements. I have lures that cost more than $9.00.

2. They cast way farther than you think. I discovered the 2 foot pole when I took a small child fishing in the canoe. He had his 2 foot Shrek pole, I had a decent 5' pole. For paddling convenience, I would put the pole behind the stern seat where I was sitting. My son was too small to really cast, so I would cast and he would reel in. I quickly learned that the Shrek pole would cast a decent distance. Not as far as my pole, but almost. It was much easier to cast the small pole and then paddle to where I wanted to fish, than to reach behind me, grab my pole, cast etc. Soon I was just bringing the Shrek pole and not bothering with mine at all. If you want to fish a spot and can't quite cast far enough, take a stroke with the paddle, and your problem is solved.

3. It seems you can cast more accurately with a short fishing rod.

4. A short rod will fit in a 2.5 foot length of ABS conduit in front of you in the canoe. In white water I lash the conduit to the yoke. I can then yank it out like a sword, cast, reel, and replace it in seconds. I can fish rapids in this manner, even while canoeing through them. When the rod is stowed, it does not flop around, hook your gear, grapple passing tree limbs, puncture dry bags, or get knelled upon. It does not get in the way of switching the paddle to the other side either.

5. A short rod is less likely to smack you bowman or sternman in the head while casting. I have six kids. They are reckless. The canoes are often crowded. For me this is a big deal.

Obviously this won't replace your 3 wt. bamboo fly rod, but if fishing is a hobby rather than a reason to live, I really recommend trying a 2 foot rod with a closed face reel. I find I fish a lot more, and every one of my friends who have tried it so far have been converted after initially making unfortunate comments about my manhood/sexual orientation/etc. Stay away from the Barbie, Shrek, Spiderman poles. They tend not to last even one season. Find a Dock Defender, or sometimes I'll see a Shakespeare uglistick that short and just put a good but cheap Zebco reel on it. Unfortunately an open face reel does not work because the first line guide is too close to the reel seat, even if it has a huge guide. I would also recommend against an ice fishing pole. They are not made to cast, and do a pretty poor job compared to even a Dock Defender. Eagle Claw makes a 3' fiberglass rod that holds some promise too.

I watched a 3 year old land a bass on his Snoopy red and blue special, while I got shut out. That little rod gave him better "location and presentation"!

Didn't someone catch a record setting fish with his daughter's "Hello Kitty" rod/reel some time ago?

Most of the trout I've ever caught were either on jigs or with worms, and most of those were taken straight down out of a canoe on some little Adirondack pond or lake. I actually have a 3' rod I keep at my parents house in NY (where I do most of my fishing, despite living in the sportsman's paradise. warm muddy water just doesn't do it for good-tasting fish). Two small loops of paracord on my thwarts and through the spaces (what are they called?) in the gunwhales of my canoe hold it conveniently for portaging. So I won't laugh. I think it's a good idea. I also have something I found in a deceased friend's shed when we were cleaning it out, similar to a Swede Stick, that is similar to what you're talking about.
Last edited: Aug 1, 2013
G

Many long years ago, my father bought a thing called a pocket fisherman so that he'd have a fishing device no matter where he found himself. I recall he caught a pretty nice walleye with it. It had a folding rod and a zebco style reel. It cast fairly well for short distances.

I have a "light" tackle set up with a rod that's about 4 feet in length. I caught my largest bass on it with a little bitty "Rooster Tail" spinner one day fishing for pan fish. The bass was easily over 6 pounds, but I'm a minimalist who doesn't carry a scale, but I do carry a little tape measure. It was 23 inches. The line was 6# test. We had a lot of fun landing that thing.

Nuthin wrong with minimal equipment. Fish the way you want to. The operative word is "fish."

Just passing through this thread, and I thought I'd snark that I've been very happy for more than 60 canoeing years with a 0' rod (and 0' line and 0 bait). I do occasionally throw bread upon the waters, but only when the LNT police aren't looking.

Glenn MacGrady said:
Just passing through this thread, and I thought I'd snark that I've been very happy for more than 60 canoeing years with a 0' rod (and 0' line and 0 bait). I do occasionally throw bread upon the waters, but only when the LNT police aren't looking.

Since this is the "Hunting & Fishing" forum, I'm surprised you ended up here.
You must log in or register to reply here.