Woodpuppy said:
Seems to me that if glass is weak in the inside of the canoe that another material might be better. I get that cedar strip boats are beautiful; but would Kevlar be a better performing interior layer?
Click to expand...

The green bars in this chart shows that S-glass followed closely by carbon have the highest relative compressive strength/weight, so that is why those two material are frequently used as the outside layers of a canoe. Carbon is lighter and stiffer than S-glass, so it is often chosen as the exterior layer to lighten and stiffen the canoe overall, but at a much higher dollar cost than glass. Kevlar is very low in compressive strength, so it is rarely put on the outside. The exception is the rare all-Kevlar hull, which might be made simply to prioritize total canoe weight as much as possible, because Kevlar is lighter than glass or carbon. 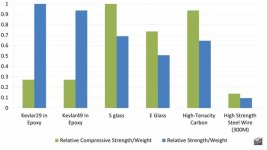 For the inside hull layer where you want tensile strength, here is a chart that shows the relative ultimate tensile strengths. S-glass is the strongest here, too, followed in a close almost-tie between Kevlar and E-glass. 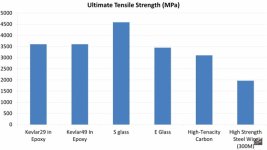 So, to build the strongest canoe, these charts would suggest S-glass on both outside and inside. And, indeed, such canoes are made. But they are heavy because fiberglass is much heavier than carbon, which is slightly heavier than Kevlar.

The blue bars on this next chart take fabric weight into account and show the relative tensile strength/weight of the fabrics. Kevlar is very commonly used as the inside layer of a composite canoe hull because its tensile strength is high and its weight is the lowest, resulting in the best tensile strength to weight ratio by a significant margin. 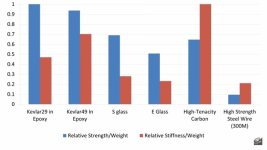 So, Woodpuppy, you are correct that Kevlar would be a very good choice for an inside patch on a hull because of its tensile strength and especially its low weight. I believe Cruiser agrees with this.

However, there are other considerations besides tensile strength, compressive strength and fabric weight. On a wood strip canoe, like Jeff's Raven, one likely would want the internal patch to be as invisible and transparent as possible so that the wood will show through. Only glass is transparent, and no one would likely want a yellow Kevlar patch on wood.

In addition, Kevlar is harder to cut, easily frays, is hard to sand, and is generally reputed to be harder to work with than fiberglass. That's why even on a canoe with a Kevlar interior an inside repair may be made with fiberglass instead of Kevlar, unless the repairer is quite experienced working with Kevlar. And perhaps unless the Kevlar patch can be closely color matched to the older, sun-darkened Kevlar hull interior—another aesthetic factor, which is a concern except maybe for banged-up dedicated whitewater canoes.

I took these charts from the video I linked in one of my posts above.

I feel much better about selecting s glass for interior/exterior of the next build now, thanks Glen ... that is all good info

Woodpuppy said:
Seems to me that if glass is weak in the inside of the canoe that another material might be better. I get that cedar strip boats are beautiful; but would Kevlar be a better performing interior layer?
Click to expand...

I thought about it but decided to save on money.

I got done sanding the inside and outside of the hull and there was no cracking on the outside, just gouges. I plan on taking care of that with epoxy.

On the inside I'm making small patches of 4 oz e-glass on the few places where the original glass split because of the tension and then I'm re-glassing the whole bottom with 4 oz e-glass to stiffen the hull without adding too much extra weight.

Thanks for all of the comments!

The more you discus composite structures/layers the more apparent it is that you really need to define what it is you want the final product to do. In this case, I made the assumption that breakage on the inside is a bad thing ..... if the composite design was deliberate, that the exterior layer was designed to allow a lot of flex, just to handle this scenario ... the inside absorbs the impact and if necessary breaks, while the exterior skin remains intact, keeping the hull water tight integrity at the cost of some structural strength ... that may not be a bad trade off.

So to your query with kevlar ... depends what you are looking for, it's harder to handle, more expensive, has a visual issue with wood and will offer better (but not substantially better) performance.

This is a useful discussion for me, as I have just finished figuring the layup for my next boat and the more you think on things the fuller your understanding becomes, and while this can be a pretty complicated subject, it all seems to come back to the idea of "Good Enough".
Backing away from the abyss of the "what ifs" and staying in the main lane of your requirements, the typical 6 oz layup is strong enough to do the routine job of rivers/streams/lakes easily. However as Glen pointed out (and I missed) this is more of a white water situation, which takes it into another realm of requirements, and that is another lane
Click to expand...

The repairs on the raven are complete. I added some small patches on the inside in 3 places where I lost a little wood when removing the loose glass and then glassed apart the whole bottom with 4 oz. E-glass on the inside. The outside for sanded and re-epoxied. 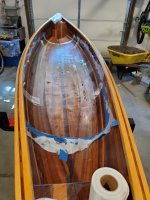