I wish I had scanned in (er, had my son scan in) more photographs of trips with Kathy, Ben and their kids; we have 10 years of photo albums with them on two-family canoe trips.

(A side note about order of naming; I still refer to couples starting with the name of the person I first met; I worked with Kathy at the Center for Vaccine Development before I ever met Ben. Same with CVD’er Jane and husband Tom, and others. Kids go in birth order)

The four of them were our constant tripping companions for a decade when our kids were young and like aged. We each had an OT Camper and a Pathfinder, and tripped with those canoes from Maine to the Adirondacks, south to the Buffalo, on coastal bays, blackwater rivers, swamps and marshes. Those canoes got us there and back (although sometimes the driving there and back was more challenging).

When the kids were little those canoes were paddled bow backwards for better adult boat control and easier kid reach over the gunwales. Kid reach is important, not just in paddling; one of Quinn’s favorite games was to hurl Barbie ahead into the lake and then rescue her as Kathy guided the canoe past within reach. That canoe doll took on the appearance of a rare “Trailer Trash Barbie”, complete with matted hair and bedraggled outfit, eventually becoming “Naked Trailer Trash Crack Head Barbie”. 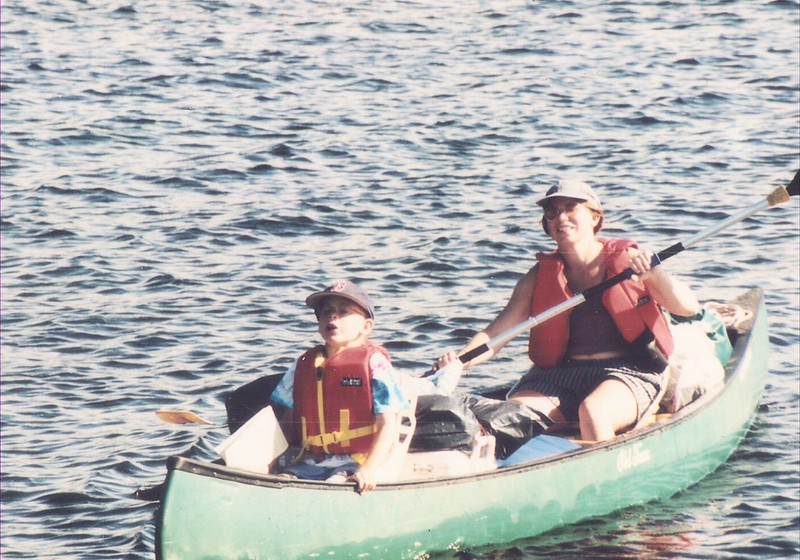 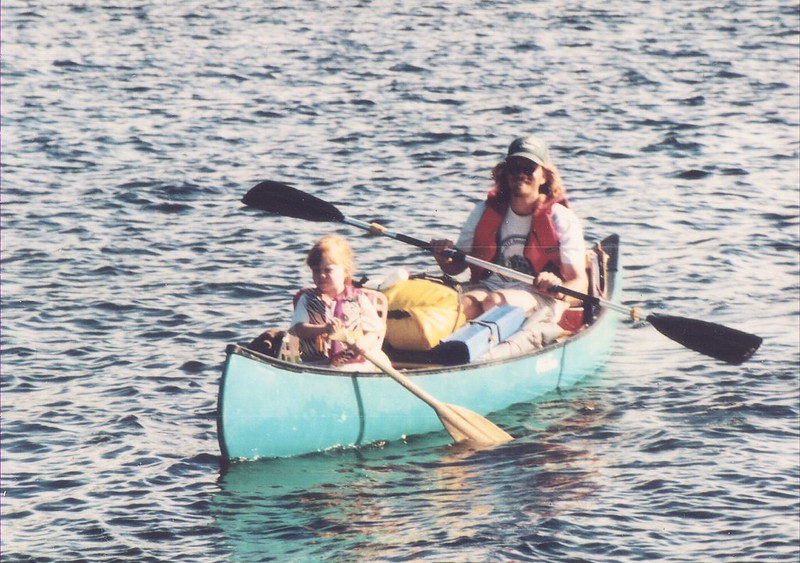 Those plebian OT’s were marvelous canoes for family tripping with younguns, flat bottomed stable and forgiving. While it is possible to capsize a Camper or Pathfinder on benign waters, it takes some effort, even with weight on the seat edge against the gunwales in an empty canoe. 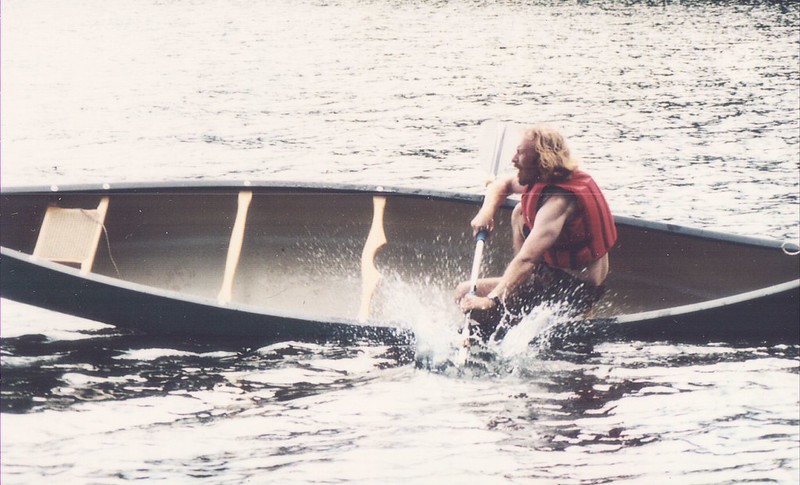 That was part of capsize and self-rescue practice in front of camp on some summer trip. We all practiced, including with kids aboard. Being younger and more agile we could sufficiently empty the canoe and re-enter. It was great family fun, and I believe gave the kids more confidence in canoe travels.

Soon enough the kids went into solo boats, OT Rushton, Wilderness Piccolo (the best kid-sized mini sea kayak ever made) and other kids sized hulls. On Cooper’s first solo downriver trip, in a Dagger Tupelo, he was already an experienced paddler, made eddy turns and even attained up a small rapid. 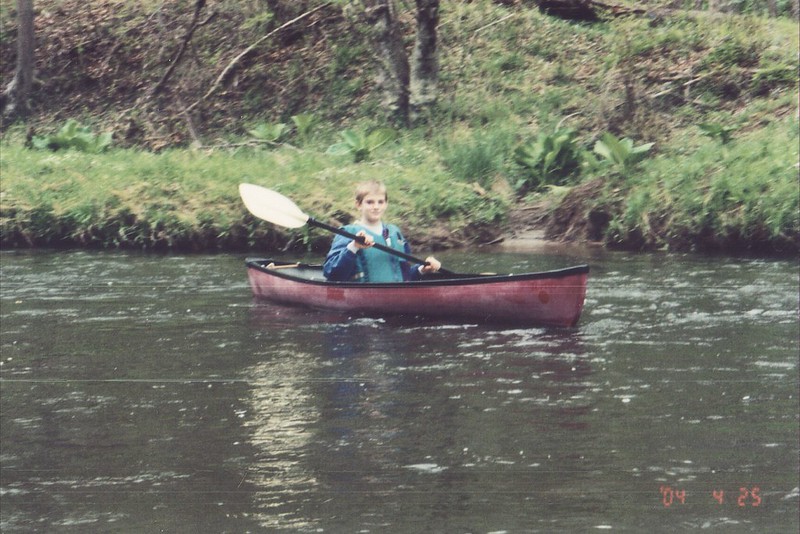 I know our children hold fond memories for those trips. Windbound on Third Machias, the trip where blessed Ben pulled a complete Sunday New York Times from a dry bag, the kids spent two days cooperatively erecting a “Fairy Village” back in the woods behind camp, using bark and twigs and other forest floor findings.

Fairy Villlage eventually included fenced farmers fields (with planted “crops”), multiple dwellings, stores, sand paths to town center, a high rise (Fairy Towers, with condos built between the trunks of a forked tree) and a complex and evolving storyline; scofflaw Fairies in arrears were indentured, and worked in a mine (a hollow under a tree) to pay off their debts. 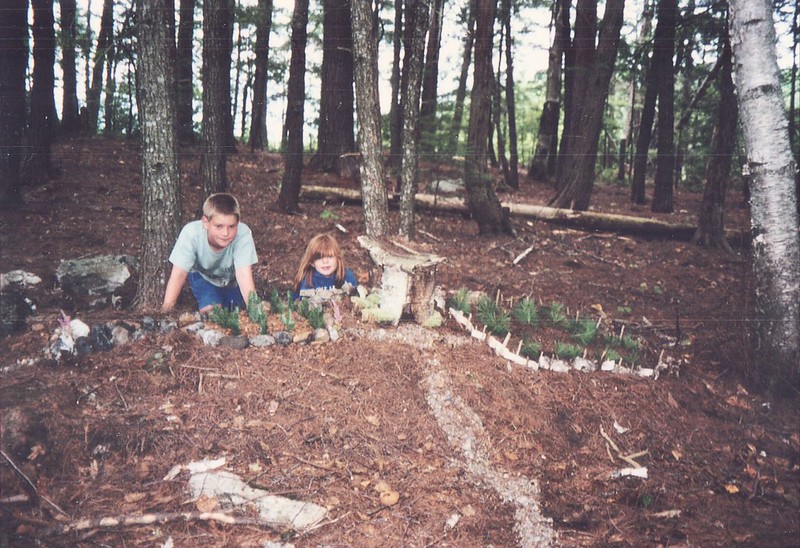 That was all from the minds and imagination of children. Quinn was the driving force behind that construction, and before we left sketched she out a complete plat of Fairy Village. I’d love to see that sketch again someday; Quinn had mad skills as a child artist, and still does today.

We could not bear to disassemble Fairy Village when we departed, and I could only hope that the next party to camp there had young children with vivid imaginations along. Or, if all adults, ate some shrooms before wandering behind camp into the woods.

I really need to scan in more photos of other paddler companions. Anita, Dave and Paul were on many a trip. Especially Dave, there are some stories there. Dave managed to get in a lot of jams, and proceed to figure a way out of them, to the point that when something went wrong we would stop, think, and ask ourselves WWDD, “What Would Dave Do”.

Blew the engine in the Dodge minivan (Kathy, Ben and family, with Wilma the wonder Weimaraner) en route to the Edisto. Oh no, “What Would Dave Do”?

Rent a Ryder box truck, one long enough to hold the canoes and gear inside, and a car carrier trailer to tow the defunct minivan, and keep on trucking. There was some consternation when the Ryder truck proved to have two bucket seats, not a bench seat as expected, but in conjunction with our van we made it all work.

Last Kathy and Ben story. They traveled with the middle bench seat removed from their minivan, so the kids were further away, and their front seatbacks not kickable, and Wilma had a dog bed on the floor in between. This didn’t leave room for their paddles, so they tied them inside one of the canoes on the roof racks.

One trip down south they were very late in arriving. When they finally turned up Ben related that he had glanced in the rearview mirror and was surprised to see the cars behind him swerving every which way on the inter-State.

The paddles, two take apart Mohawk double, a couple singles, a couple kid paddles, and fallen out of the canoe and onto the highway. Ben took the next exit, headed back north, next exit beyond and headed back south, hoping to salvage some paddles for the trip.

Pulling over amidst the paddle debris field Ben found a disabled Volvo, with a Mohawk paddle shaft sticking out of the punctured radiator. Not just any Mohawk paddle, but one with Ben’s last name and phone number inscribed on the blade in yellow paint pen.

That trip was almost as expensive as the Ryder truck and car hauler rental.
You must log in or register to reply here.

Things that interfere with or otherwise screw up canoe trips
2