Well, I finally got out with a couple of friends for some fresh air. The destination was Lobster Lake, west of Katahdin and east of Northeast Carry. Since it was after Labor Day, we expected to have the whole lake to ourselves, but sadly that was not the case. Most of the campsites were spoken for. There was also a great deal of seaplane activity and some fly in campers.

We took the 20 foot, Chestnut Canoe Company, Ogilvy "Pool" model. It has a wine glass transom that we mounted a 3HP kicker on. This served us very well in the wind and the chop.

I tried out a backpacking tent that I bought pre-Covid and hadn't got around to trying. It rained hard all night the first night and Sadie dog and I were as snug as two bugs in a rug. I can't say as much for the lack of performance of a new Sawyer Squeeze water filter. I have to play with it more, but I had to rely on the filters brought by the team. Very disappointing to say the least.

All in all, a good trip. The leaves are just starting to change. It won't be long until snow flies. Get out while you can!

The Chestnut Canoe Company, Ogilvy, 20 foot, "Pool" we restored a few years ago. 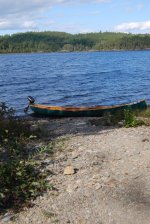 Sadie dog enjoying a boat ride in the Maine sun. 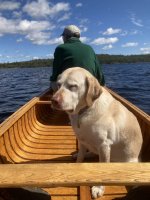 View of Katahdin and points east from the summit of Lobster Mountain. 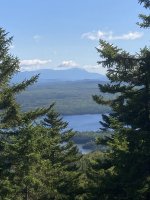 A view of Big Spencer Mountain to the south. A big body of rhyolite that sticks up like a sore thumb. 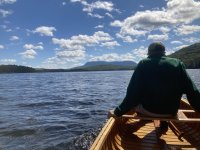 Just beautiful, Thanks for sharing .

Too bad about the crowds. Such a great lake.

Nice pictures, is it hard to get into Lobster with that canoe?

No, easy ride in for the most part with the 3 HP kicker. We needed to watch for shallow spots though and did break 2 shear pins in the process. It didn't take much to break the pins.

Al - I may have exaggerated the "crowding". Campsites on the lake are spread out pretty well, so crowding is really not much of an issue. Finding a site could be an issue though.

This will dismay some. Lobster Lake has a wonderful wildernessy feel. I have managed to ruin that for us by going there on day trips. It is fairly common to see canoes with kicker motors as the passage is passable if you stay left on approach to the lake ( to the right is an extensive area to ground out on). The downside is that people often motor back to their cars and drive to Raymonds store if they have forgotten something.. So much for the wild..

We camped in a ( horror) trailer at Seboomook Wilderness Campground in mid July and Lobster put in was an easy 35 minute drive. We cruised past Ogden Point North ( the only campsite that was taken-there are 21). However we did not go as far as Big Claw. Big and Little Claws are the farthest and often the least used.

We had a nice lunch on a beach and paddled back to our truck.. about a total of 12 miles. You can do a six mile day trip too and get most of the scenery.

Crowds are not the norm for this lake as far as I can tell. In some 15 trips I haven't failed to find a campsite. Ogden North is usually claimed first and is the hardest to get.

September is fishing season, so I'm not surprised that you saw others. I've been in there with my 20' grand laker stripper canoe with a motor several times without difficulty. It is gorgeous. Thanks for the report and photos.

Did you flip that canoe over or cover it with a tarp during the overnight rain?

For big canoes that have motors a kayak ( eek!) hand pump is most helpful to remove large puddles in the boat. 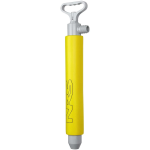 What was the first river you ever paddled?
2 3