Lawson Equipment has been mentioned several times on Canoe Tripping. Their cordage and hardgoods are well worth a look to support a family run business specializing in high quality products.

Small, family run businesses means customer service above beyond; I received a personal (not auto-generated) e-mail response to my last order, as well as an automated shipping response.

Among their products I appreciate the incredible reflectivity of Lawson’s Glowire.

And their two-hole bar tensioners.

Those tensioners are handy when group camping with folks who can’t manage a taut line hitch in the dark, especially after the bourbon has made its rounds and the wind suddenly shifts, the rain commences and needed tarp adjustments require dashing out in the deluge. Even which loop to pull free on three-hole plastic line tensioners confuses some folks. Cue sudden tarp collapse.

I have admittedly been one of those confused folks.

I ordered another 50 feet of bright yellow highly reflective Glowire, and a half dozen line tensioners. Last round of tarp(s) maintenance I added Glowire guy lines and bar tensioners to every family tarp. Except, somehow, the tarp I use most often.

Four appropriately-length Glowire guy lines cut for corners of the ridgeline hung Tundra Tarp, and I packed the leftover Glowire and two extra line tensioners for additional guys, to be made in the field if/as needed.

Or made in the field as needed for companion’s tarp needs; I have brought-along extra GloWire and used it on friend’s tarps. Usually after someone tripped over a tarp line. Repeatedly.

Q re Glowwire. I have some similar stuff and it is very rough. I have the Tundra Tarp of course and find that the reflective cord could abrade and cut through the loops in the tarp. I used a softer paracord to make sacrificial corner loops then tied the reflective cord to that.

Not having Glowire I would like to know if it too could be abrasive.
G

yellowcanoe said:
Q re Glowwire. I have some similar stuff and it is very rough. I have the Tundra Tarp of course and find that the reflective cord could abrade and cut through the loops in the tarp. I used a softer paracord to make sacrificial corner loops then tied the reflective cord to that.

Not having Glowire I would like to know if it too could be abrasive.
Click to expand...

YC, I guess it could be more abrasive than softer cord. The Glowire is noticeably rougher than some other cordage, but on the plus side, as advertised, it is largely snag and snarl free.

Like you I have cord loops on the Tundra Tarp tie down webbing, not just at the corners but on every perimeter webbing loop. And not just loops; I have a short loop of cord there, with a 10 inches or so of the cord’s two bitter ends left dangling free.

Those loose danglies are handy when I want to stake one end of the Tundra Trap near the ground as a wind break, but don’t want the sil-nylon itself directly against in the pine duff, dirt or sand. 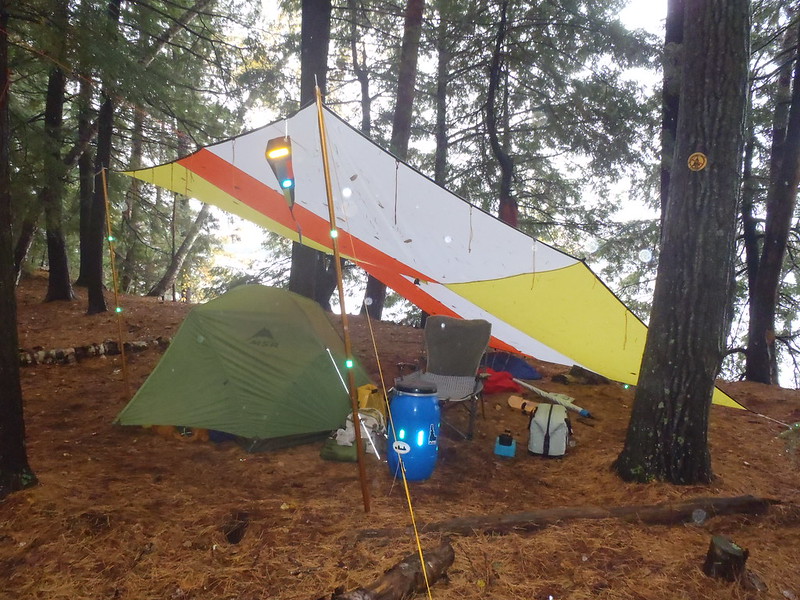 The pole guy lines in that photo are not reflective line; I neglected to replace the guys on my most often used tarp when I did all of the others.

I don’t use reflective cord as the ridgeline, but instead some softer, higher strength/low stretch 5mm line; the ridgeline is above head level and poses no tripping hazard or inadvertent strangulation obstacle.

Instead of tying the reflective cord for the corners or sides to the tarp’s webbing loops, or to the cord loops, I have a minibeener on the tarp end of each guy line, which saves time in set up and take down, and makes it easier to move the guy line to the appropriate place on the tarp perimeter as needed for windage. Those are not affixed to the tarp, but stored in the stake bag, so I can attach whichever length wherever needed in a variety of set ups.

I have a minibeener on one end of the ridgeline and prussic set up as well, again for ease of set up/take down. With the tarp prussic-adjustable along the ridge line I just swing the beenered end of the ridgeline around a tree and clip it around the line, and trucker’s hitch the other end of the ridgeline for desired tension. That also allows the prussic knot to slide all the way to one tree, without a hitch in the way on one side. Sometimes that little bit of leeway is appreciated.

Anything that makes set up and take down faster and easier works for me, especially putting up a large tarp while solo.
G

https://lawsonequipment.com/
You must log in or register to reply here.