I just got back from a trip to the Adirondacks with one of my usual tripping companions. Not a wilderness trip, but we didn’t have more than a few days and needed somewhere with cell service. We launched in Northwest Bay Brook (free parking) and traveled down Northwest Bay and to the islands in the narrows between the north and south basins. 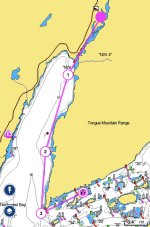 I had been in the area a few times on fishing trips, but never by canoe. I knew the lake can turn into a beast with a north or south wind, but that wasn’t called for and had confidence the TW Special could handle a bit of rough water. As the brook widens the scenery can’t be beat and it was a beautiful day. 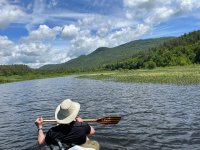 As we got a couple miles down the bay we could see the white caps after the point. There was a stiff breeze out of the north east that wasn’t called for and not noticeable due to the ridge line on our left side. 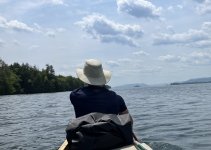 We figured we would see how bad it was as we turned the corner.
It seemed manageable as we turned, but as we kept going the wind continued to increase and it was pretty hairy. Up front stayed dry, but I took a couple waves over the side- enough for me to slide down and paddle from a kneeling position. I was glad I put the minicell pads on a few days prior. We were able to tack to the lee of the first island and wait it out a bit. It did die down enough to safely paddle another mile or so, but when we got out around the corner of the big island (Turtle Island) we weren’t making any headway and decided we had had enough for one day. We found a nice spot on Turtle island in a small bay and called that good for the night. 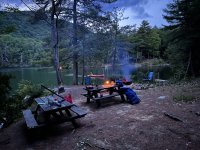 We had planned on Gem Island being our base camp, but being out in the open water wasn’t an option. We had this island to ourselves and decided to stay for the next few nights. We had an uneventful rest of the trip and had a fine time fishing, paddling, and just taking it easy. 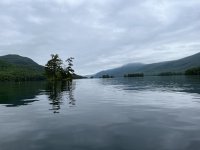 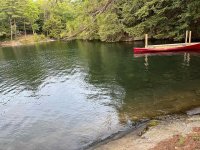 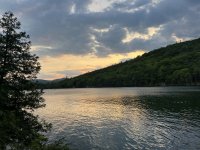 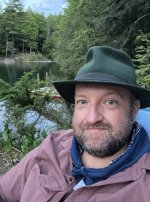 It's a beautiful area.

You can also hike along the ridge on the east side of the lake. Also gorgeous views.

Years ago we did that trip early in the season.. It seemed to be quiet for you thank goodness.. Beautiful backdrop. Then the crazies come in powerboats. We did not go into the bigger part of the lake either; it can be scary not only for wind but for yahoos in overpowered boats.

I paddled that area 25 years ago in sea kayaks. We launched at Bolton Landing, explored the islands in the Narrows and took out at Northwest Bay Brook. Did you get a chance to go into Paradise Bay, which is a famously scenic spot on the lake?

Glenn MacGrady said:
Did you get a chance to go into Paradise Bay, which is a famously scenic spot on the lake?
Click to expand...

Not this trip, but I have been there before. I really like the green tinted clear water.


yellowcanoe said:
It seemed to be quiet for you thank goodness..
Click to expand...

We chose the day after Memorial Day for that reason. The chilly water helps with the big boat crowd too.
C

I believe I met you at the launch; I remember the CT plates. Beautiful day.

Yes- you had the Placid Boatworks canoe?
C

Gorgeous! I never got to camp on the islands on Lake George.

Great trip report. I would like to paddle that area of Lake George. I have hiked the Tongue range a number of times. It's a beautiful spot.
You must log in or register to reply here.