Well, back in October(?) I washed some 18 ounce #8 canvas to preshrink it and then ironed it and cut out most of the parts for a 70 liter(ish) basic envelope pack loosely based on the Duluth #4 Traditional pack. I used a Sew-Go pattern and general instructions set I bought from Outdoor Wilderness Fabrics in Idaho for a whopping $1.50 USD. 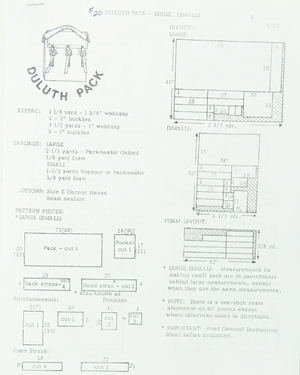 Duluth uses 15 ounce canvas but I have most of a 50 yard roll of black 18 ounce canvas so that's what I used. I have a pair of industrial sewing machines so I used T-135 bonded nylon thread which as twice as heavy as the T-69 heaviest thread most home sewing machines can handle (some can't even handle T-69). The pattern calls for fairly light pack cloth though which pretty much any machine can sew well. If you wanted to use canvas I suspect that you wouldn't want to go heavier than 10 ounce canvas, and maybe not even that heavy, using a household sewing machine. Both my machines are triple feed (AKA "Unison feed") with the usual feed dog under the fabric and both a walking foot and needle feed up top. Triple feed makes it easy to sew lots of layers of heavy fabric.

I got a good bit of the sewing done in October and then other projects and the holidays got in the way of wrapping it up until this week. Please don't yell at me about the absence of in-progress pictures as I've always sucked at stopping for pictures.

The biggest modification from the basic Duluth pattern was to order a shoulder harness set from ALPS Mountaineering for a Red Tail 80L pack that mounts to a webbing ladder on the pack that allows you to adjust the harness up and down on the pack body. That feature is intended to allow folks with widely varying torso lengths to wear a single pack size of a pack with a waist belt. I wanted to be able to ensure that the pack would ride low enough to be out of the way when carrying a canoe so I went with the webbing ladder for that reason. A plus is that I can buy the harnesses for less than the cost of the materials to make it.....

Here's the pack with a Council Tool Hudson Bay belt hatchet for some scale. 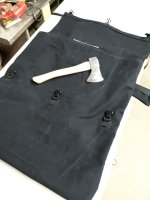 The strap locations were reinforced on the inside. As a part time climbing instructor I have a 50 yard roll of 2" tubular nylon so I cut 2" squares of that which gave me good stout reinforcements with minimal work. The lower shoulder strap locations already had canvas reinforcement sewn on before I switched to the webbing so they are kind of holding your pants up with a belt, suspenders and Gorilla Tape. And the lower shoulder strap locations were already on the double layer reinforcement wrapping the lower part of the pack. Happily, the sewing machine didn't care even a little bit about sewing through all that. It did grunt a bit on places where three doubled seams intersected each other so I turned the machine over by hand on those. And wrestling that much canvas and leather around on the machine took some planning and a good bit of sewing seams in reverse to make it all fit under the machine's arm. 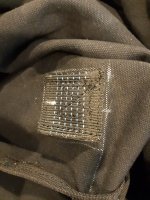 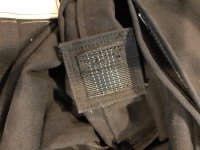 The straps were all sewn with "Box X" stitching. 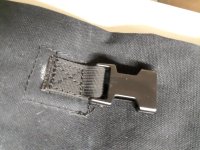 Here's a few shots of the shoulder harness showing the height adjustment ladder and the removable tumpline. One lesson learned is that the next time I'll add a pair of side release buckles to the lower end of the straps so I won't have the straps dangling if the tumpline is removed. The webbing ladder is sewn through to a 6x10" piece of 8-10 ounce vegetable tanned leather cut from the belly section of a hide where the leather is too soft for making holsters. The pattern called for a total of three layers of packcloth there but I have a lot of the leather and the machines sew it so that's what I used. 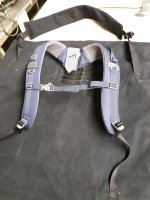 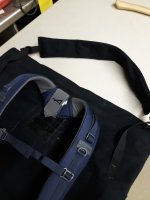 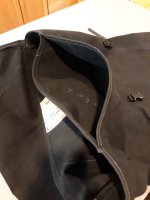 But unlike the Duluth pack I got a rash every time I thought about the unfinished edged of the pack body Duluth leaves in their pack interiors so I used heavy nylon binding on all the exposed cut edges. 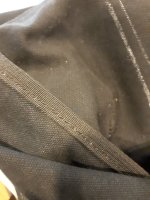 It took all of ten minutes and a couple yards of binding to clean up the exposed edges. The rash stopped itching right after I got that done......

I stuffed a couple of sleeping bags, two wool blankets, my Gore-Tex parka and trousers and a heavy cold weather parka into it. There was still more room but you get the idea.

Oops! One thing I should have done differently was to put the fixed part of the buckle on the flap and the webbing on the pack body. Oh well..... 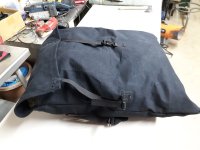 Now I need to go over the seams to clean up and melt any thread ends I didn't attend to while sewing and put a pair of grab handles on the side of the pack to make getting it into and out of a canoe that's below you easier.

The next few projects will be smaller bags and pouches to learn how to make different kinds of pockets and to try different styles of zippers and then I want to make something similar to Duluth's Kitchen Pack. 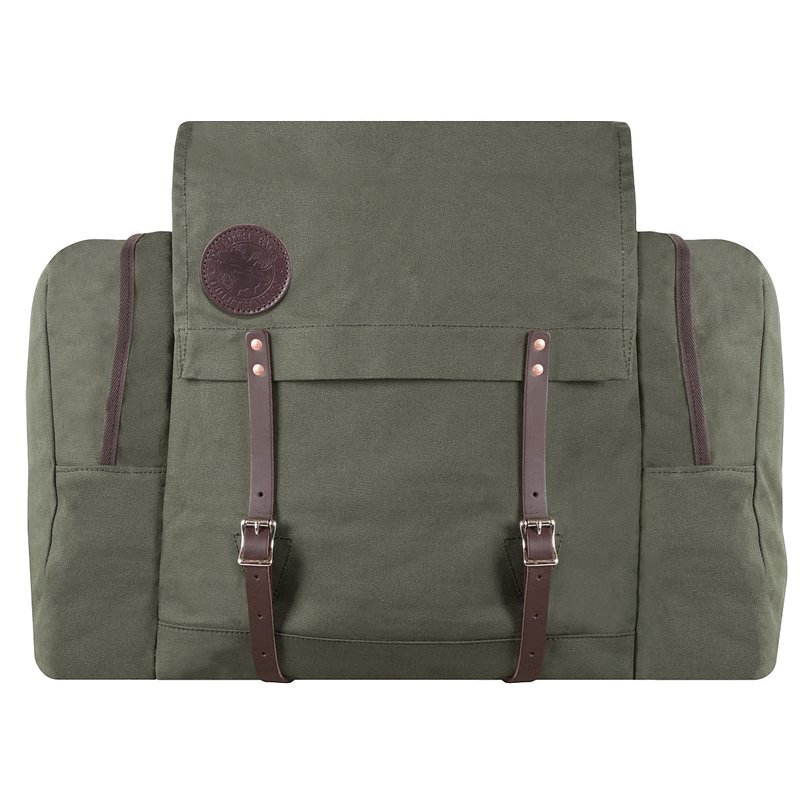 Check out the deal on Camp Kitchen - 64L at Duluth Pack
www.duluthpack.com

Best regards to all,

That looks really nice, great job on the sewing. Very neat and professional.

Nice work! Looks very durable. The camp kitchen pack is really cool looking; has anyone used that pack? is it a good design? I also made my own packs with canvas and nylon thread. Duluth Pack and Frost River both have a video on YouTube of how they make a model of their lineup. I used them as reference as I had no idea what I was doing. Did you size the pocket to fit the hatchet or was it that size in the plans? That contrasting stitching around the opening looks great! Don't forget about a utensil roll.

Thanks to all for the kind comments. I assure you that as I'm still pretty new to sewing and that this is the first really big hunk of canvas and leather I've wrestled around the sewing table the longer seams especially are nothing like professionally straight and even.....

GRS Riverrider said:
Nice work! Looks very durable. The camp kitchen pack is really cool looking; has anyone used that pack? is it a good design? I also made my own packs with canvas and nylon thread. Duluth Pack and Frost River both have a video on YouTube of how they make a model of their lineup. I used them as reference as I had no idea what I was doing. Did you size the pocket to fit the hatchet or was it that size in the plans? That contrasting stitching around the opening looks great! Don't forget about a utensil roll.
Click to expand...

I can't speak to having used the kitchen pack but maybe someone else can. Part of the reason I want to make something along that line is that the inset side panels mean that I'll be sewing on much smaller sub-assemblies which should make for much neater seams, strap attachments etc. At that point I hope to start using the olive green thread as I also really like the look of contrasting threads. I sewed the top of the pocket piece with olive green thread partly to see how the color combination looked and partly because that's what was on the machine at the time.

I already have a knife and utensil roll with leather pocket protectors to keep the knives from cutting the canvas. Its sized for full sized butcher's tools and large spoons, meat fork and spatulas for cooking in big 45-60 quart pots though so at some point I'll make something smaller for canoe type trips.

The pocket is a simple envelope pocket and not sized for the axe. As this is the first things like this I've done I wanted to keep it simple.

Very nice work! This should serve you well for quite some time.

LanceR said:
....I can't speak to having used the kitchen pack but maybe someone else can.
Click to expand...

I had a Duluth Kitchen pack, it had a lot of room and pockets but just too heavy when you fill it up. I used it on two trips and ended up trading it for a Duluth “Wanderer” to somebody on the west coast. Gave him my utensil pack too, just not needed for what I do. 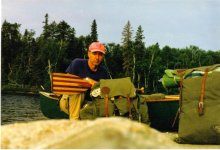 Good idea.
Canoe packs get hard use. I don't like plastic buckles because they fail. Nylon can fail after some sun exposure. Brass buckles don't fail. Leather lasts a long time with proper maintenance.
Great job of sewing.

ppine said:
Good idea.
Canoe packs get hard use. I don't like plastic buckles because they fail. Nylon can fail after some sun exposure. Brass buckles don't fail. Leather lasts a long time with proper maintenance.
Great job of sewing.
Click to expand...

As a general rule for when I buy plastic stuff I only buy ITW FASTEX hardware. I have some of my old military gear with those buckles that's been in use for more than 30 years and the only buckle I ever replaced was cracked when it was crushed in the armored hatch of the commanders station on an armored personnel carrier.

I have leather for making some sheaths and axe masks and am ordering rivets and burrs and hand stitching leather needles and thread. At some point I'll be using leather straps and at that point I'll switch to brass buckles. But I suspect that I'll always have a use for plastic buckles and nylon webbing.

Sounds like you have found the right Fastex buckles Lance.
I have all kinds of equipment like boat covers with rotten straps and broken buckles.
You must log in or register to reply here.