Spent a fun day practicing some canoe poling on my local river (Big East, Ontario, Canada). The plan was to pole upstream further than last year's trip , setup a day-camp on a sandy spit somewhere, and snub back down to the launch area. Here's a shot of the gear loaded up at the access point. 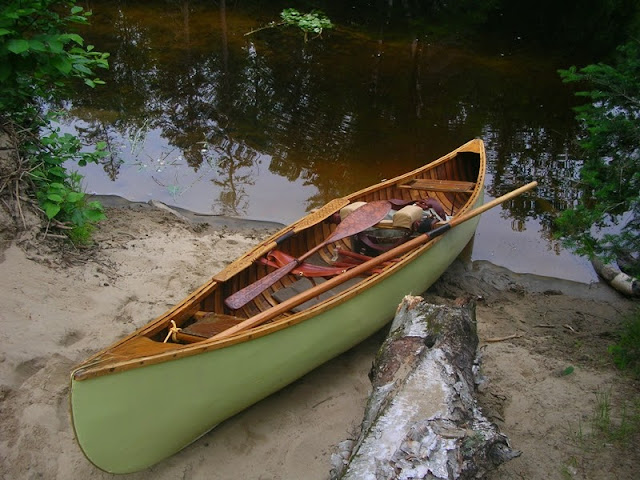 Water levels were much higher than last year's trip when the driest season on record forced a total fireban across much of this part of the province. Surprising how much this changed the nature of the river. Obviously the current was stronger, but this year there were many more downed trees to contend with as well as a lot of channeling where parts of the river had serious flow and others were too shallow to move. Plenty of horizontal trees along the riverbank waiting for their turn to plop down 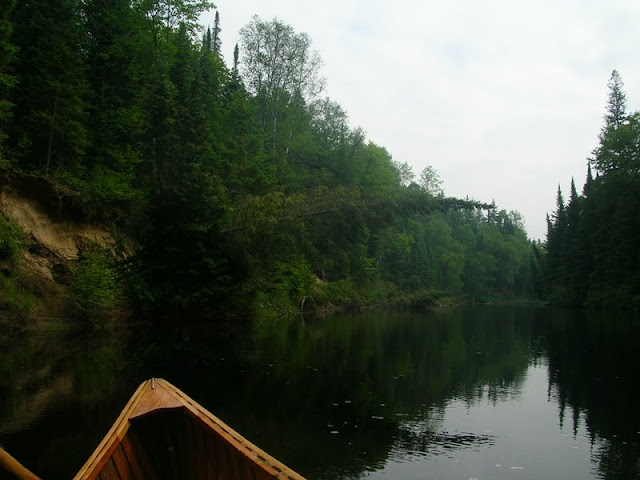 Horizontal trees on the riverbank

In deeper sections of the river where the canoe pole wasn't needed, I rigged up the camera on the end to record some footage. To secure the pole, the other end was tightly lashed in with the leftover leather straps from the tumpline on the centre thwart. Really like it when gear has more than one usage. Hope this is useful to other solo paddlers wanting to experiment with filming. 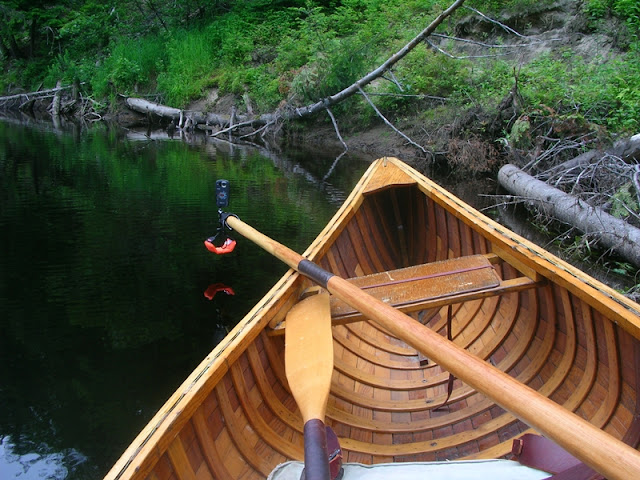 Camera secured to top of pole 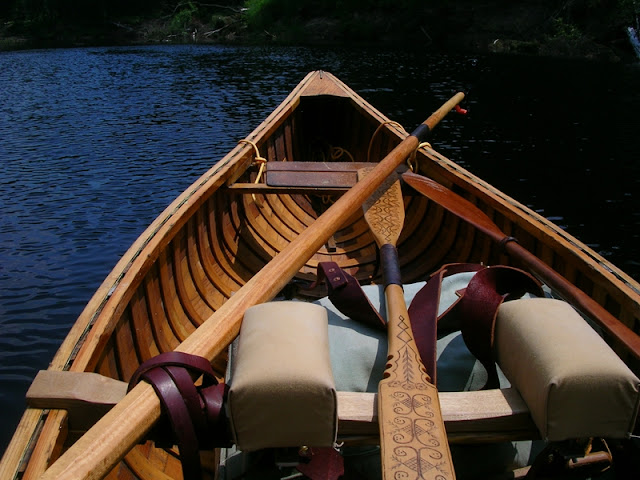 Other end lashed with the excess tumpline straps


Last winter I made a homemade camp stool. I tinkered with the idea of making the legs multi-usage into a homemade camera tripod. Came up with a very crude version, but at least I can justify bringing the campstool and putting it to use when not sitting on it. Here it is in "camera mode". Used this for filming some of the basic shots on shore and for the downstream run. 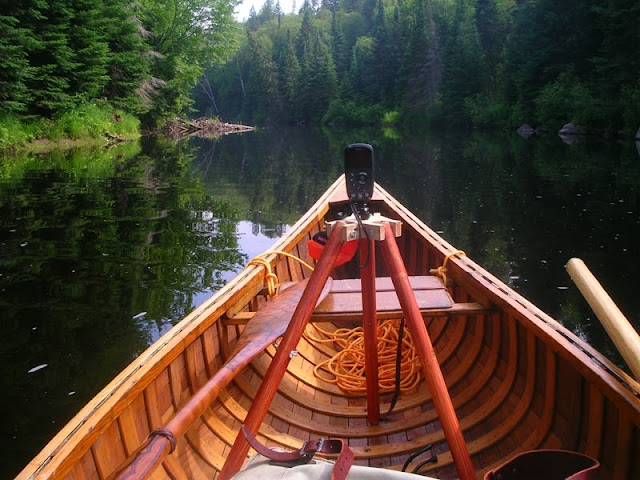 Anyway, after some deep water paddling against the current, the bottom of the river could be seen. At this point, I switched to the much more efficient pole to get further upstream. 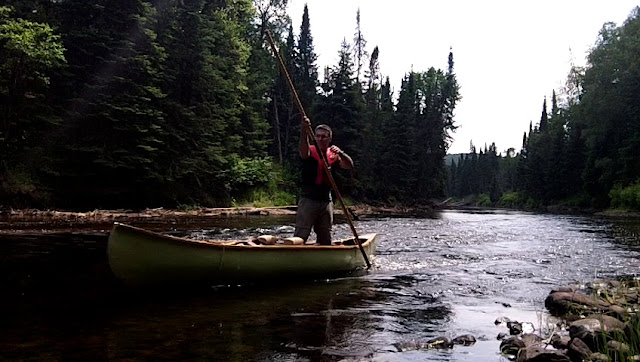 Eventually needed a break to rest up and eat. Spotted this sandy spot which looked perfect to setup a temporary shelter from the sun. The sand was scorching hot! The tripod was reconverted into its "campstool mode" to sit up and enjoy some lunch. If it wasn't so hot, I would've had a fire and cooked up some noodles or something, but a daytime fire in such humid, muggy conditions made no sense. 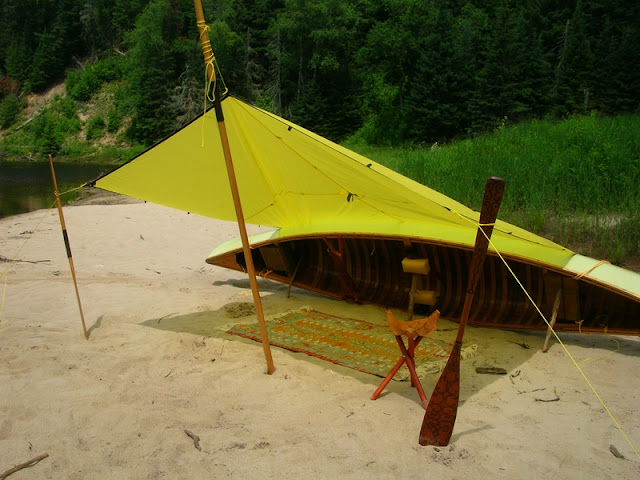 After recharging the inner battery, headed further upstream. As mentioned, the current was much stronger than last year and at one point was too much for a novice poler like myself. After exhausting myself with a few attempts, the only option was to track upstream with painter lines. Rigged up using the bridle system seen in Bill Mason's films and illustrated in Ray Goodwin's great book (see sample pages of this chapter HERE. Found it to be quite tricky work to hold the line angles and not be slipping all over the rocks. 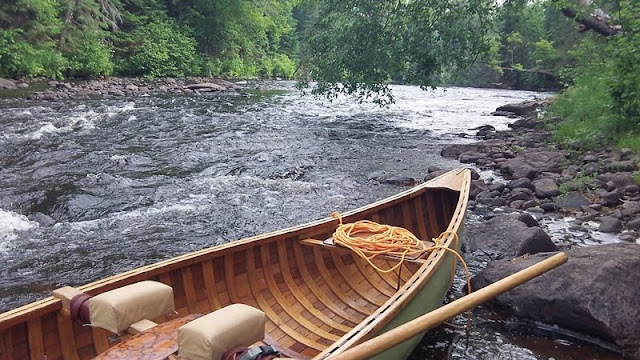 Couldn't pole up this section 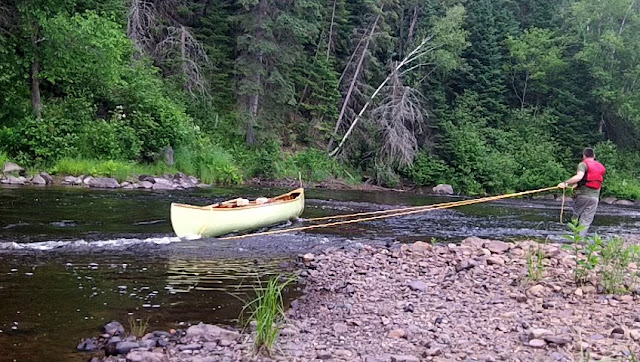 Eventually it was time to turn around and head back. Couldn't really manage taking too many pics during the steady downstream run while trying to steer and avoid the fallen debris, but here's a shot in a riffle. 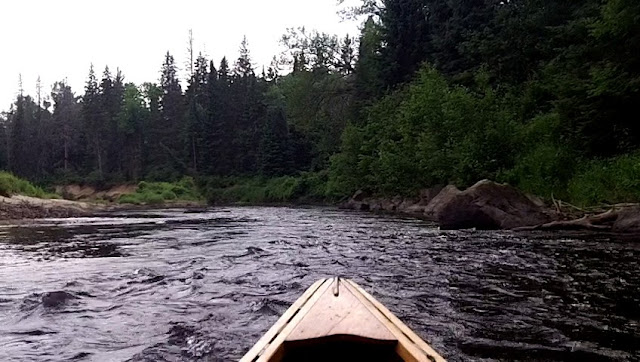 On the way back noticed this adjacent pond off the main river that I didn't catch before. Ended up exploring this neat little section that was free from the current. This is where poling really shines to help get you into these shallow spots 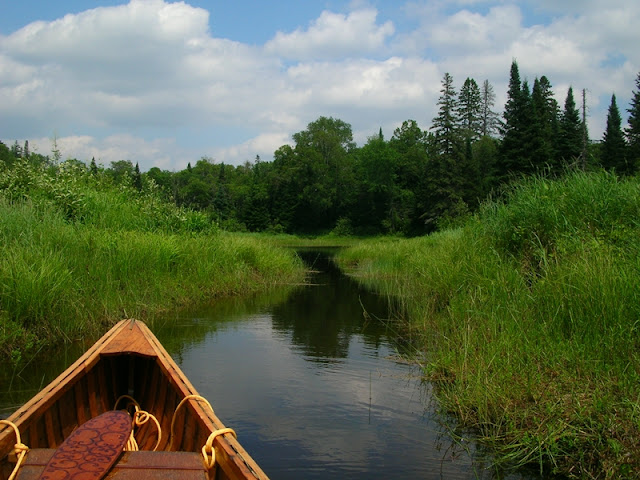 Channel to a little side pond 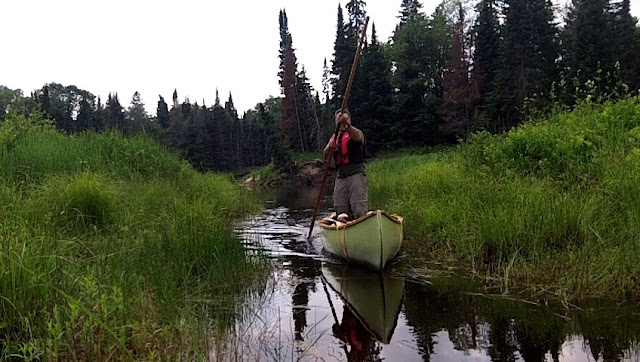 Poling up the tiny channel

At the far end of the pond was a marshy area where I spotted this guy fishing in the shallows. It allowed me to get a relatively clear shot before retreating in the reeds. 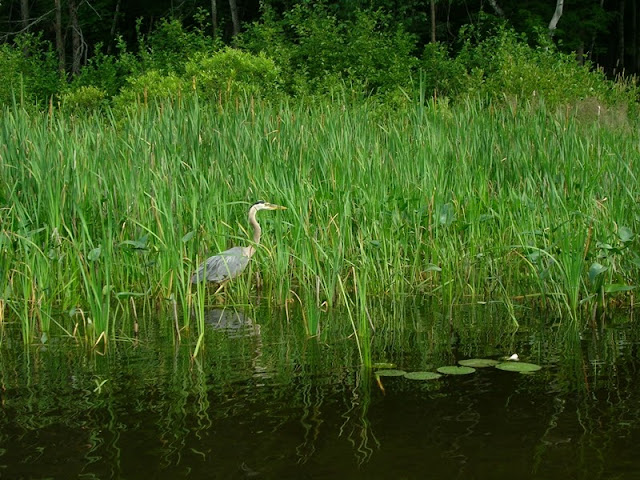 Even though this wasn't really remote trip, I found the different water levels meant that this river was a great place to practice some backcountry skills - paddling, poling, snubbing, lining, & tracking. Put together a brief vid (3:49) of the scenery. Sorry no dramatic music in the background - just the sounds of the river, the bird life, and the deer flies buzzing around.

Oh man - that was great! I prefer videos that have the natural background sounds. Looks like a very nice river. Thanks for taking the time to post the photos & video!
S

Yes, thank you for that. Great editing. And no "epic" soundtrack. Wonderful.
A solid demonstration of skills.
Thanks also for the link to that book. It is clearly written and presented.
O

What a great report! One more who likes the real background sounds and not some noise. However, I've got some serious lust going on towards your paddles! Your whole rig is so pleasant to look at in the photos, I can only imagine the deserved pride in paddling such a beauty.

I really like your forward stroke technique: a good comfort angle with the paddle, horizontal gripped, with a smooth and strong pry off the gunwale into a Canadian stroke recovery. None of this overblown vertical paddle and stacked hands stuff.

Being lazy, I probably would have just traipsed through the water and dragged the canoe up those shallows.

What kind of canoe is that?
L

You've all been reading my mind!! What a great trip, a great report, and a great video! Just as was said above, it is the variety of water conditions that allows for the practice of all those skills. I second the admiration of your paddles, your boat, all your gear, and your way of presenting and sharing the experience. Appreciate the Ray Goodwin reference, too. Have seen him on DVD and have been hoping for more. Thanks!

Geeze, I gotta start poling this summer. What did you make your pole out of? You should come up this way for a trip some time!

Appreciate the kind feedback everyone!

Glenn, I can't seem to get the technical paddling rhythm I read about in advanced paddling books these days. This style just worked for me when kneeling in the hull. Hey, whatever works to move the boat to where you want to go, right? I did drag up the first rapid before slipping on the algae covered rocks and splashing around all silly (that scene didn't make the video cut). After that, thought it'd be better just to practice with the lines.

I picked up the canoe by trading for some unwanted, non-canoe related stuff collecting dust in the garage. It's been heavily restored (quite amateurishly) over the years but is still water worthy so it's the user boat. Dick Persson of Buckhorn Canoe assessed it as a Rilco / Richardson Aquacraft model Cree - a 15 footer. Rilco / Richardson was the successor of the defunct Lakefield Canoe Company run from '62 to '67ish. It used narrow wester red cedar planking and a distinctive set of holes for the seat caning pattern. Apparently right before going bankrupt, the company made a series of low quality canoes using up whatever material they had so it has original mismatched rib widths and other building shortcuts. Then someone restored the stems and did a splice on the inwales near the bow, slapped on some plywood over the seats, and put on a very thick keel. It's a boxy, deeper canoe and not very ideal for poling, but it works and I'm not worried about using this one on a rocky river. It was red but to get my 4 year old into paddling, I let him choose the colour for repainting. He picked that mossy green color and now this is the only canoe he wants to ride in (my other canoes are blue).


Memaquay: I made the pole from a 2x12 spruce board left over from another project. It had a knot free section on one side and decent grain. Posted some pics of the build process on this thread...
http://www.canoetripping.net/forums/showthread.php?299-Making-a-Spruce-Pole

I'm sure where you are, you could find an ideal dead standing spruce and get a perfectly tapered pole straight from nature. Would love to make it back to NW Ontario again sometime. We used to head over your way for hockey tournaments as a kid but no Outers program at my school unfortunately...
Last edited: Jul 14, 2013

Thanks for posting this report, very entertaining and inspirational. It must have required alot of planning to get those neat shots of you poling and linning, like your gear, it shows your commitment to excelence, Thanks, I really enjoyed seeing the pictures, video and learning a few new things.
You must log in or register to reply here.