This rock face tells an almost 100 year story of the BWCA. It's not uncommon to see water and ice lines on the rocks in BWCA lakes but this one is quite different, as are the rocks all around Little Gabbro, Gabbro & Bald Eagle lakes. The current lines are 1-2 feet higher than the water level but unlike almost everywhere else there isn't any moss or lichen for another 6 feet or so. This is because at sometime in the past there was a damn put in by the portage from Little Gabbro to the Kawishiwi river to help float logs out in the spring is my guess. Can't find any info on when but I would bet during the CCC camp days in the 30's & 40's. That caused the water level in these lakes to be at least 6' higher and that's the story the rock face tells. Sometime n the last 30 years most of that damn has washed away, you can still see it and even parts of the wooded structure that was used to pile the rocks up if you look.
The first number of times I was on these lakes the water level was at the higher level and everything looked so different. The last time I saw the water that high was 1981 or so. It was fun paddling all around this time seeing how it has changed. These used to be motor lakes and it was no problem to motor right up and into Bald Eagle, in fact at the end of the lake where it is just river through a marsh now used to be a great crappie bay. In the 60's and early 70's there were docks at the end of the portage in off of Spruce road that resorts kept boats at so you could just walk in, unlock a boat and go fishing.
It's hard to tell now that this was a motor route and pretty much all logged over at one time. I also looked and couldn't find any sign of the old docks.

Still figuring out how all this new stuff works, I'll post a more complete trip report in the next few days. 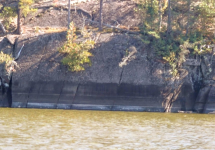