Visit to the 2019 Temagami Canoe Festival

Got the chance to check out the canoe-themed festival held in Temagami, Ontario. Last year the festival was cancelled due to the major forest fires in the area. 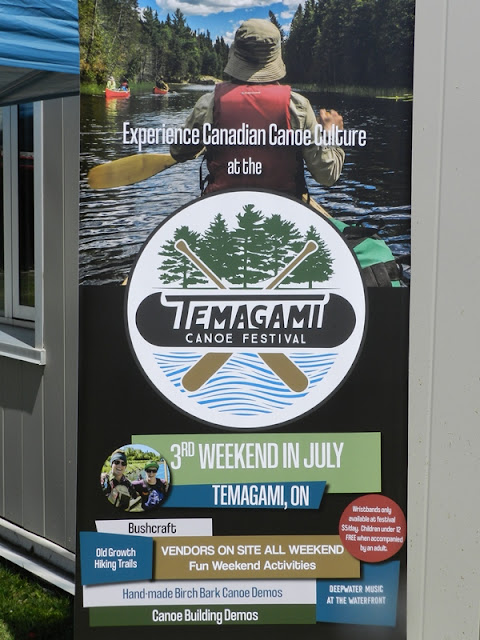 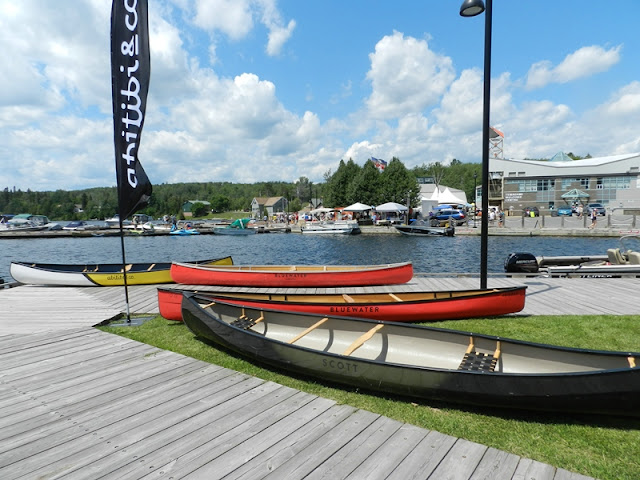 One of the neat features was a small brigade of voyageur canoes which made their way to shore and set up camp... 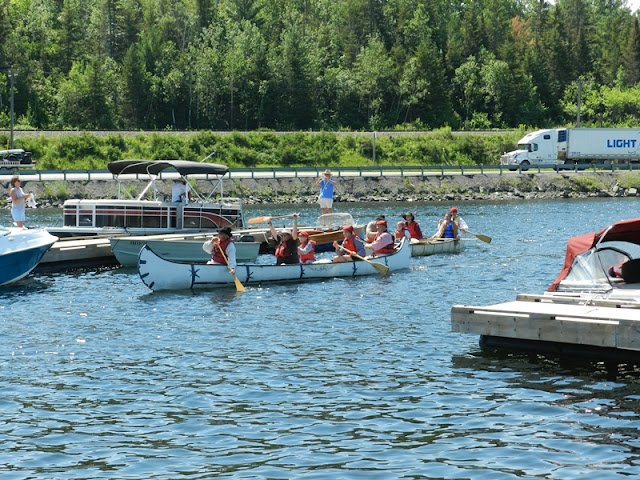 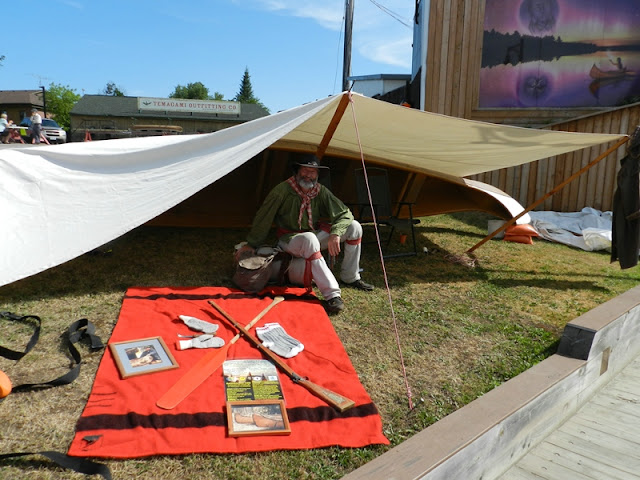 Got to meet Dave from Sewn Home, a new canvas tent maker based out of Timmins, Ontario. He had a variety of tents and tarps setup all with dried spruce poles. His wall tents looked great. 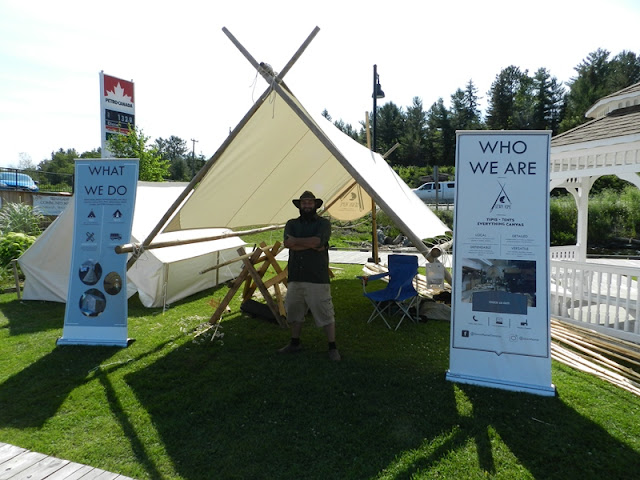 I was there to check out the various wooden canoes and hand-made paddles. There was a neat one in the booth of a Coureur du Bois re-enactor alongside the display of pelts. The long blade was etched with the typical travel route through the region from Montreal to Fort Temiscamingue just northeast of here. 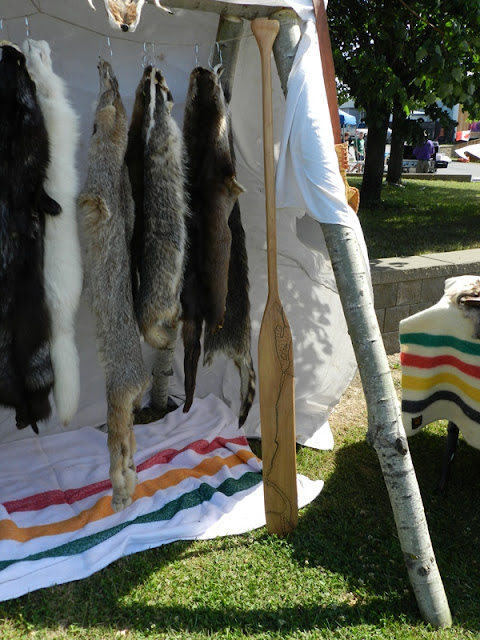 Bob's Backcountry Paddles had a nice booth with wide array of hardwood paddles. Like myself, Bob decorates the blades with some pyrography, mostly maps of local Temagami waterways. 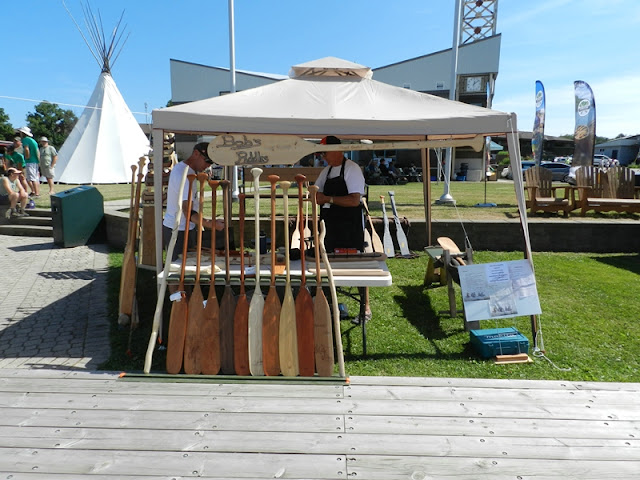 A solo paddling display was conducted right off the main dock for the audience. You'll also see some folks checking out a red canoe up on the dock in the background. I went over and took a couple of pics as well. 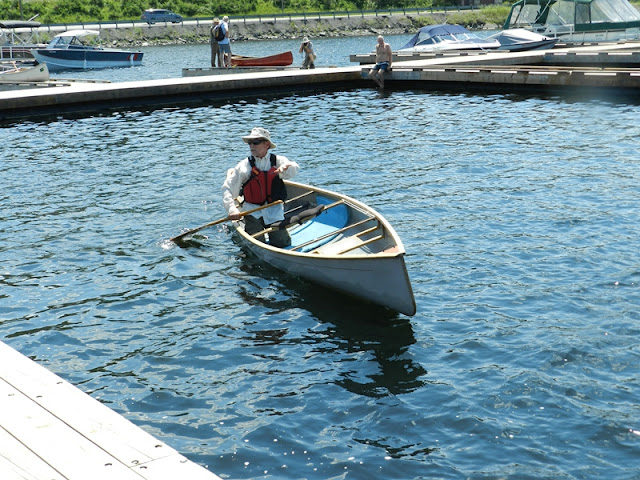 Turns out it was an older model from the Temagami Canoe Co, said to be Canada's 2nd oldest surviving canoe company. The short boat was particular wide, someone akin to a Chestnut Bob's Special. The bow seat was covered with a fuzzy sheepskin top for ultimate seating comfort. 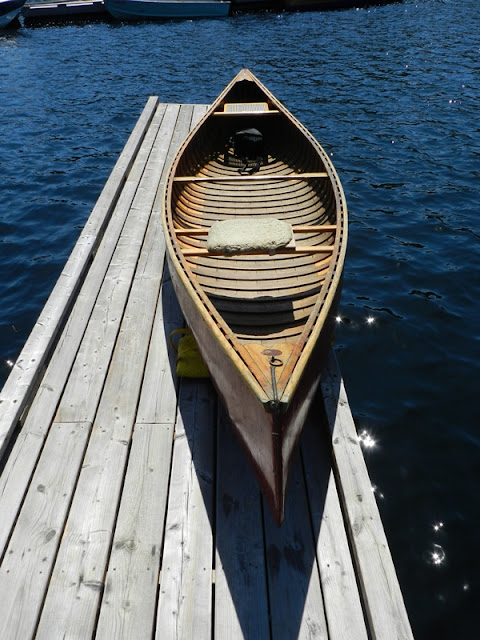 Other wood canvas canoes were on display. Here is a restored 17 foot cruiser made by another local maker, Garden Island Canoe Company. The maker constructs seats with woven nylon cordage that get varnished forming a tough weave that is more ideal that cane for tripping canoes. 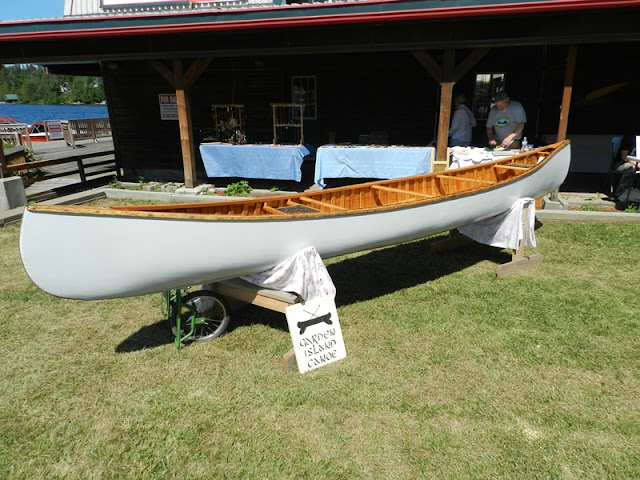 Another beauty on display was a 16footer built on the original Prospector form of Chestnut Canoe. The maker, Hugh Stewart from Headwater Canoe Co in Wakefield, Quebec was on hand. Hugh was one of the few individuals to acquire Chestnut canoe forms when the company folded in 1979. This one was being raffled off as a 2nd place prize for a local contest. 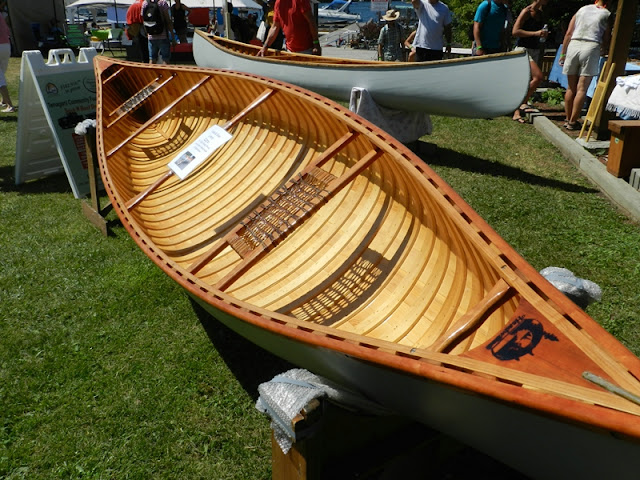 The highlight for me was seeing the various birchbark canoes on display. Very impressive was this canoe built by an impressive young lady from Bear Island First Nation with an elder last summer. The canoe made the the trip down the Lower Missinaibi River to Mattice as part of inaugural journey. 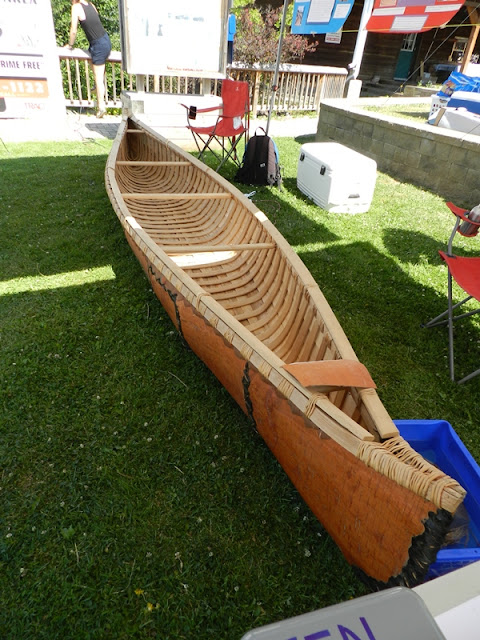 The cedar thwarts had etchings of a feather and the maker also implanted feathers in the stem deck weavings... 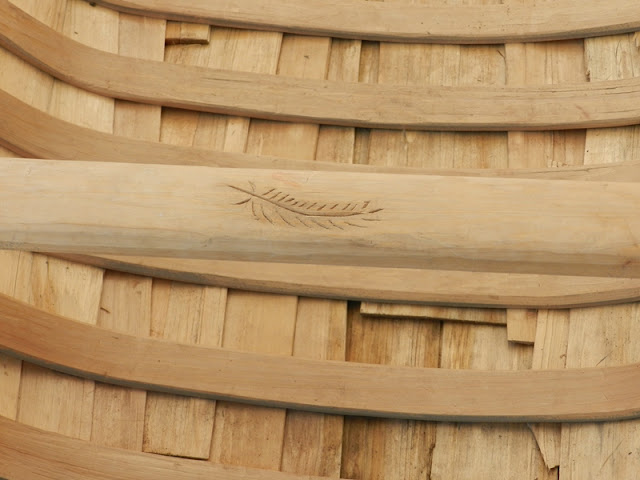 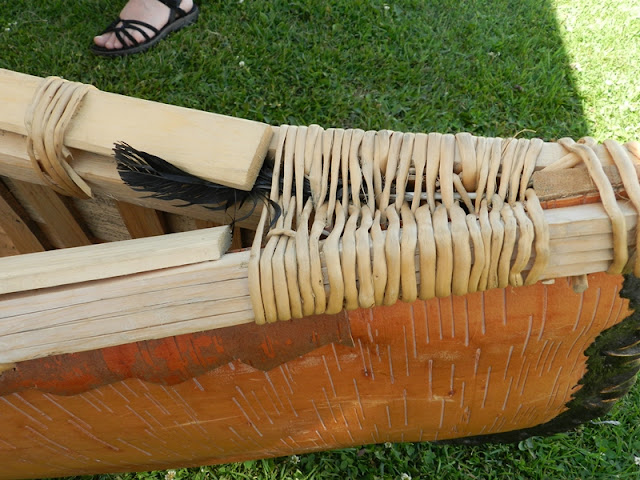 The main outfitter in town also had an impressive collection of modern canoes... 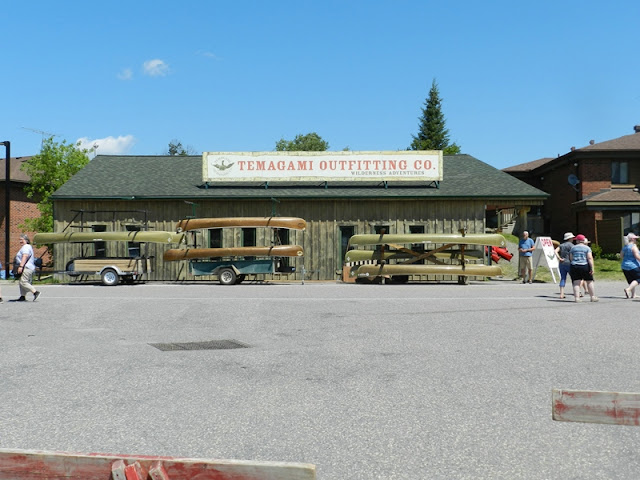 Inside was a rare treat - another bark canoe dated to be at least 80+ years old but needing substantial repair. With the broken lashings holding the thwarts, the canoe has widened quite a bit, but the woodwork was very neat revealing a skilled builder. 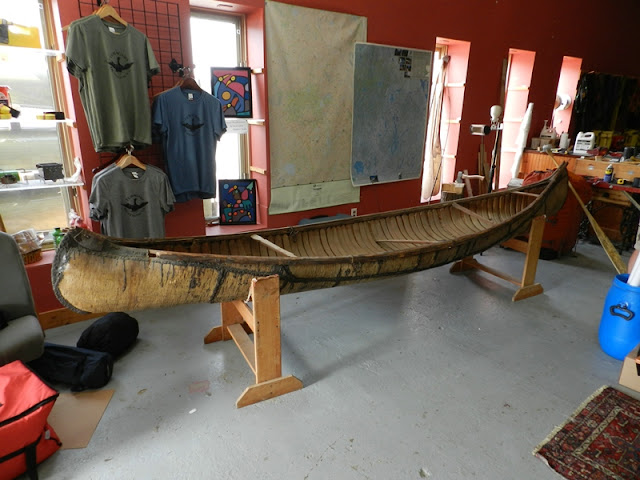 Along with on-going musicians on stage, the full day BBQ and plenty of artwork and crafts from First Nation artisans, it was a happening event for such a small little town.

Bill Mason said that the canoe has a perfect shape. It has also shaped so much history. Thanks for shaping such an interesting report on this festival.

Great to see that festival has grown. Dang it I keep missing this.
I used to swim off those docks, we called "the government docks" once upon a time. Speaking of which, I attended a memorial service last autumn for a dear cousin of mine who passed away. There were a number of photos of her there, one of which was my favourite which best showed her fun personality. In the photo she was looking up at the camera from down in the water at those same government docks 40 years ago. As they were tying up the boat someone teased her with a bribe to jump in the lake for 10 bucks. She said she'd do it for 20. They said sure and just like that she jumped in. I'm told that when she was asked if it was worth it she said something like " The water's friggin cold, I shoulda held out for 40."
This would've been a fun demonstration to check out. https://www.temagamicanoefestival.com/portaging
And so much more! Thanks Murat, a great trip report.
Last edited: Aug 9, 2019

Thanks for sharing this Murat, I have always tried to stop in Temagami when I passed thru if only for a coffee and gas. I even stopped at a building I believe was the Temagami Canoe Company shop but no one was there at the time.

Looks like it was a nice day and the displays where interesting. I follow "Sewn Home" on Facebook, he's always got some interesting posts. He seems to being doing well, good to see.

Being a fan of Chestnut canoes, I would have liked to have met Hugh Stewart. He has a great video on Youtube about a canoe trip in the Yukon with 3 wood canvas canoes. https://youtu.be/hscUVF6MKkc

Thanks for taking the time to post this, I really enjoyed seeing the pics and captions.

Thanks for sharing.
You must log in or register to reply here.