Vehicle problems while driving, or parking, to and fro canoe trips

In 1996, I was driving on I295 in Maine in my increasingly problematic but sleepable 1982 Ford van conversion with a rental Surge seakayak and my Lotus BJX open canoe on top. I was going to Westport Island, Maine, to see Kerry King about the custom Surge he was building for me and to paddle a couple of lakes. My van spluttered to a stop on the shoulder somewhere north of Portland. Thank goodness I had a new invention, a cell phone.

I called AAA and they towed me to a Ford dealer in Brunswick, who gave me a ridiculous (to me) estimate to replace a timing chain. I was so sick of repairing that old van that I asked to see what used vans they had in stock. I bought a high mileage, 4wd Ford minivan for about $5,000 on my credit card. But not without difficulty. MasterCard turned down the purchase on the grounds that the charge might be fraudulent because it was so high. So, I had to spend more time on my newfangled cell phone to get it all copacetic.

My two boats were on the floor of the Ford dealer's garage while we pondered how to get racks onto the minivan. I drove to LL. Bean in Freeport late at night and bought some fake rain gutters that would hold my old van's Thule rack. I told the garage to just bolt them through the roof and headliner. I didn't care how that replacement van looked. I had to stay overnight in a nearby hotel while the racks were being attached along some other fix-up work.

The next day I was off to see Kerry King and to return my rental seakayak to Bill Zeller's Country Canoeist shop in New Hampshire (now closed).

Between seakayak rental costs, travel costs, motel costs, buying a new-old van, and the puchase price of the customized, resin-infused new Surge, I spent about $8,500 to buy my first seakayak and paddle two lakes in my Lotus BJX.

That Ford minivan didn't last but a few years.

My current canoe vehicle, a 1997 Dodge van conversion I bought in 2003, is now 25 years old and has put many a mechanic's children through college. And taken me paddling all over North America. Here it is with my Mike Galt Lotus Caper on top, a few days before the back tire rack fell off from rust at Cape Canaveral and had to be welded back on. 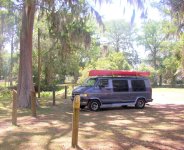 Your travails certainly beat my 1990 Ford Econoline van stories. Although I have been towed twice going up to and back from Yellowknife. Also drove much of the way home from Dawson City with cracked flex hoses. We liked sleeping in the back, in campgrounds, and all of our gear easily fit. This year we didn’t take the van, but instead drove to Yellowknife in our RAV4. Had to stay in hotel rooms, and had to get a new rack. Just don’t trust the van anymore.
You must log in or register to reply here.

Owning a canoe while living in a city, apartment, condo or high-rise

Fears while paddling or on canoe trips
3 4 5