This was a short trip and there's already good coverage of the area in other TRs, so I'll keep this a lite trip report. I wanted to make a post mainly to make people aware of a couple of less popular access points that enable a self shuttled loop trip.

The timing of my trip was early May, and I only had one night to camp. I was solo and mostly just looking to get out and sleep in a tent to open up the canoe camping season. I had a longer trip with a friend planned for the next weekend (the Millinocket Carry), so I wasn't looking for anything ambitious, but it's always nice to try something new. I love loop trips, and this was one that I'd scouted out a while back but not actually done. Why not give it a try?

The local Jo-Maryland in-the-book loop trip is Middle Jo-Mary to Lower Jo-Mary by way of the chute at Buckhorn Camps and return via Cooper Brook. It's a good trip and is described in the AMC Quiet Water guide as well as the TRs referenced above. What I wanted to do was start and end at the road on the isthmus between Turkey Tail and South Twin Lake, so I could take in the Jo-Mary's as well as the bigger Pemadumcook and Twins. By doing that I would only need to do a foot shuttle and not a portage. The distance between the put-in and take-out was only 1.4 miles, so doing it as a portage would also work, and then one could start anywhere. Note also that 3rd Debsconeag is just a short, maintained portage from Pemadumcook, so a person with some vacation time could wander around for a week or longer.

When I arrived, I first verified that the road was still driveable (it was, mostly; a beaver flooded the last 100 yards) and that both of the access points were still viable. That being confirmed, I carried down the short trail from the road to the southeast cove of Turkey Tail. The trailhead is below: 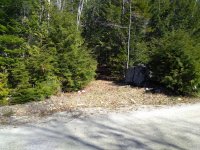 It's not hidden, and there's even a small flag, but it's very easy to miss. Still, if you know where it has to be, you can find it.

The put-in was more pleasant than I'd remembered, probably because the water level on Turkey Tail was higher. Note that there's an informal campsite here, nothing special but it might work for a late arrival. 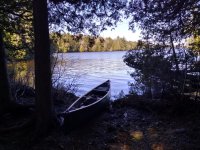 I put in around 10am, and paddled West across Turkey Tail. Entering the main body of Middle Jo-Mary, my progress was frequently impeded by this mountain that required me to stop and fish out my camera. Really I could have just bought a postcard at a gas station in Medway and saved some time, but when it jumps out all the time sporting just the right amount of spring snow it's hard to ignore. 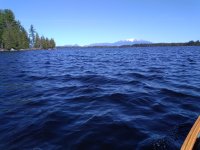 The chute at Buckhorn Camps had enough water, so without any difficulty I made my way into Lower Jo-Mary, where I stopped on a nice rock for a second breakfast. Continuing, I paddled to the outlet and right away I could see that there was a Problem. The stream that drains Lower Jo-Mary into Pemadumcook was supposed to be 30 seconds of fun easy whitewater, but the obvious path was blocked by a dead tree. I took out on the left/west side to scout from land, rock hopping up to the road. 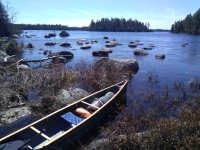 A forest road crosses the outlet on a bridge (or actually three bridges; amid the boulders the stream has a number of channels). From the bridge of the main channel I could see that the tree was a bank-to-bank strainer. Hrmpfh, this was supposed to be an easy trip. There was potentially a way to eddy out left just under the bridge to make a short portage around the tree, but that'd be a tough move to make in the loaded Traveler, and a miss would be bad news. 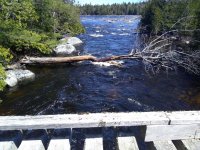 Bit of a strainer

After a bit of investigating, I found a path right (east) of the main channel, over some floating logs, to the road, then down to a cove with more floating logs. Definitely not a dry feet kind of thing, but workable and relatively safe. This was the first time I'd introduced the Traveler to the travails of places that are neither land nor water, and it didn't complain. 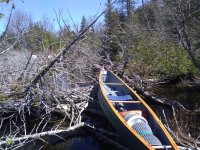 Working canoes have to put up with this kind of thing

When the schlepping was done and I was back in the boat, the stream deposited me on Pemadumcook in a sheltered cove with a number of islands, and I wandered among them looking for a campsite. The DeLorme showed campsites on two islands. One of them appeared to have a cabin, and the other had a campsite but it looked like it hadn't been used in many years. (This was a ~20 year old Maine Atlas, I probably should have looked at my newer one.) Continuing to explore, I found a nice campsite on a small island west of the two I'd seen on the map. It had some official trappings -- thunderbox, Fire Permit Site sign, etc.

I'm not picky about campsites. I find there's a certain pleasure in making a marginal site comfortable. Besides, real estate envy just takes the brain back to syphilization. OK, all that said, this was a what-more-could-I-ask campsite. It was on a pleasant little island with a pocket beach, a flat rock in the sun, a view of Katahdin at the north end of the island (a mere 75 yards away), a soft pine duff tent pad. 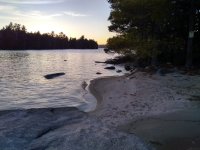 Evening in the unexpectedly posh campsite

The next morning I was up at dawn and left early, around 5:30. These are big lakes and the water was still damn cold, so I wanted to get out of dodge before any afternoon winds picked up. My paddle out was longer than my paddle in, about 12 miles vs 7, but less eventful since it was basically a one seat ride.

My take out was a small bridge across a stream which comes out into a bay pointing southeast into South Twin Lake. Just a hint of that mountain again on the horizon. 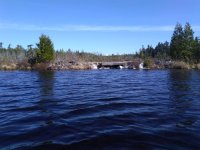 The local beavers had decided that the road was a very useful formation and had incorporated it into a dam just a few yards above the bridge, so the walk back to my car started with a bit of wading. No worries, there are always dry socks in the car. By 9am I was loaded up and on my way home. 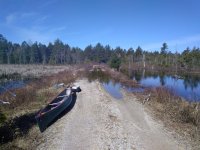 Final wet foot portage, this one on the road

This is an overview of the route (sorry, no GIS pro on this trip so only Google Earth doodles). 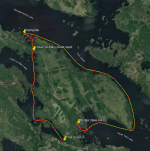 Although this was a small beer trip, I'm glad to have confirmed that those access points work. Between them and others in the area -- the launch on Middle Jo Mary, the boat ramp on South Twin, Spencer Cove, Omaha Beach, the Grant Brook Rd bridge -- there are a number of trips that can be stitched together, including some Friday after work fast breaks.

Nice trip report. Thanks for sharing.

That was an awesome trip!
You must log in or register to reply here.