Found this video, nice to hear comparisons of the way they sound while figuring out what to buy.


A video comparing the Storm to the Hyperwhistle:


The other thing besides sound that I consider important is size/form factor. I may have a Storm whistle in the dry box for my outboard, but I’m not going to carry one in my PFD. This pic from the Fox 40 website shows relative size of their product line: 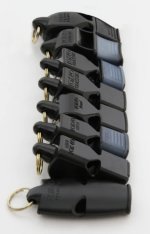 The Micro did very well in the test that Glenn posted, and I like the compact form factor. I’ll be ordering a batch of Micros for our PFDs.
Last edited: Apr 16, 2022

Now that we all have a whistle so that we’re in compliance with the law, how do you use the dang thing? We all know how to blow and make a racket, what I mean is how do we communicate with it? It seems there are numerous specialized signal systems for scouting, climbing, etc. but the three most consistent “standardized” uses I’ve found are:

1. One blast - Attention! Look at me! Or “Marco” while responding to someone’s call for help.

2. Two blast - Stop, I need to stop, or bring the group to a stop. Also “I’m OK” as an answer to someone’s single blast.

Paddling groups can also agree upon different or additional signals for their trip. What other common signals have you used or established?

Not sure it was what I intended when I made the original post, but I learned way more about whistles than I expected. Thanks, all.

Re: the signals, when I took ww class with the DC Canoe Cruisers, they explained something similar. I occasionally use a blast to try to get the attention of distant paddlers, but that's about all I've got on that.

I thought I’d piggyback onto your thread rather than create another. There was already good stuff here when I found it.

In river rescue training I received my memory was 1 whistle blast was to halt the group and 3 whistle blasts signal distress, help needed.

Whistle signals are mostly used by groups running whitewater rivers. More often than whistle signals, my groups would use paddle signals to communicate whether and where to run a rapid.

Groups can agree on any whistle signal format, but three blasts typically signal an emergency on any kind of waters or trip.

The only time I use whistle blasts to signal my own emergency was on a lake in Maine, which three of us were traversing in whitewater boats to get to the lower Moose River—a couple in a tandem canoe, a kayaker, and me in a highly rockered, Kevlar Millbrook ME.

Maine lakes can be Jekyll and Hyde—heaven in the morning and evening, but wind hell in the afternoon.

This day was wind hell blowing from the stern and I was lagging behind the other two boats. I could not control that ME's direction at all. The stiff winds just kept blowing the canoe sideways no matter how hard I tried to keep it straight. At least it was blowing me in the general direction of the destination. But I was constantly balancing on a downwind brace in the sideways canoe in the increasingly white-capping waves, in constant danger of tipping over in cold and deep waters. Very scary.

Worse, the other two boats were pulling further and further away from me in the distance, until I became all alone with no one to rescue me if I dumped. I blew my whistle until blue in the face, but no one heard it in the whipping winds and increasing distance. I was irate that no one even turned around to see where I was, since one of the safety rules of our group boating, supposedly, was always stay to in visual contact when possible. I suppose they thought I couldn't possibly be in trouble because it was "only a lake" and I was theoretically the best boater in the group.

I probably needed a better whistle that day . . . as well as more alert companions. I blasted them, and not with my whistle, for their inattentiveness when I finally caught up with them at the mouth of the river.

Princess Diana was killed the next day.

From all my experiences, I'd now invest the loudest whistles possible. You may never need it, but if you do, you may REALLY DO! Consider that in all the places you may paddle in your career, the people you want to hear the whistle may have other nearby sounds drowning out the sound of your distant whistle or may be far away.

For example, I've been in shipping channels and the Florida Intracoastal with my sea kayaks and outrigger canoe with with big ships that I may have wanted to warn of my presence. Same with roaring power boats, jet skis and airboats in lakes or rivers—maybe with distracted or drunk drivers—bearing down or coming too close to you or your kids. Raging winds, rapids and waterfalls can drown out the sound of whistles. You may fall out of your canoe, become separated, and are trying to get the attention of anyone on the water, on the shore, or anywhere. You may be lost in the forest or the Everglades trying to signal unseen rescuers you hope are out there somewhere. Or on a road trying to flag down a car.

You may face these unforeseen dangers years or even decades after you first attach the whistle to your PFD.

Yes, sea kayakers carry them. But for PFD-attachable whistles that can last a lifetime, I can't think of any reason not to get the loudest one available. 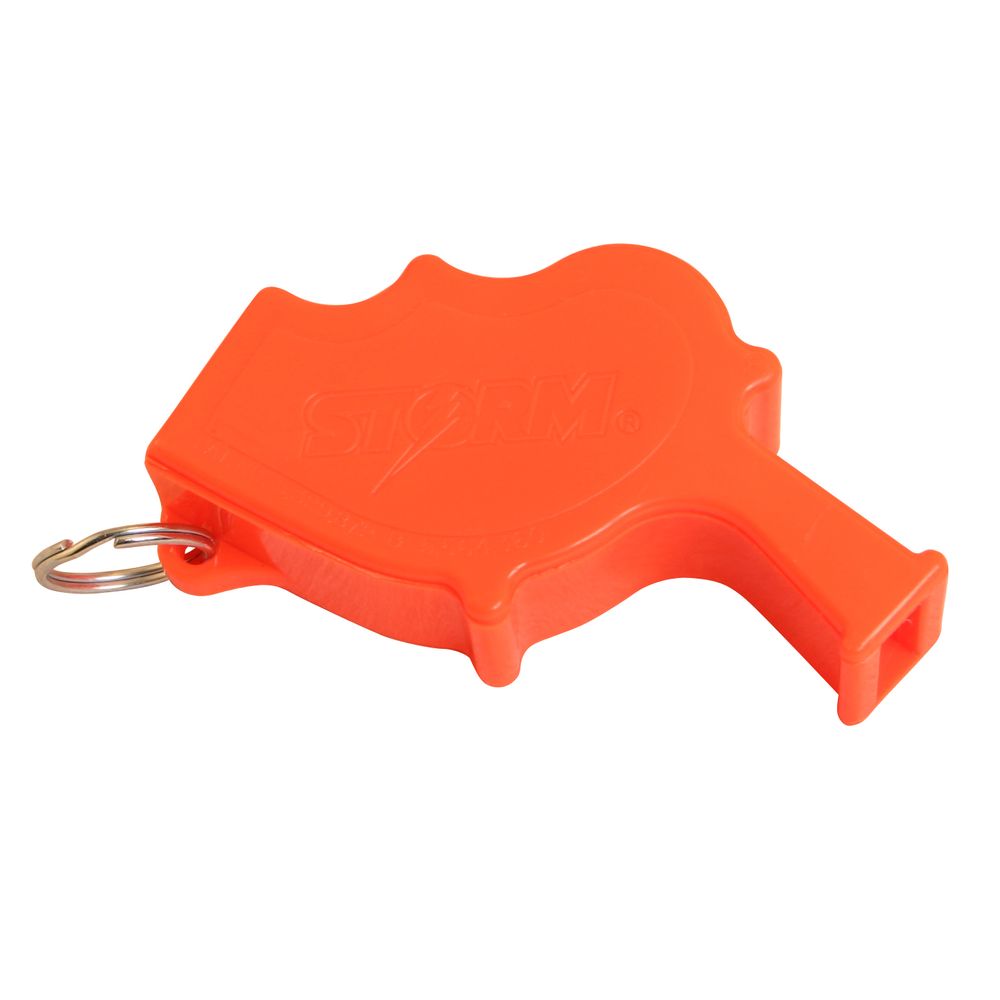 Sometimes, to be rescued you have to be heard. The Storm is the loudest whistle we carry.
www.nrs.com

I once saw a guy make a Whistle out of an Acorn top, you can make one from a twist off bottle cap also.

Right now I don't remember how it was done.

Jim Dodd said:
I once saw a guy make a Whistle out of an Acorn top, you can make one from a twist off bottle cap also.

Right now I don't remember how it was done.

Dad taught us kids that eons ago. I can also use a blade of grass… though it’s much more fiddly. But how do you attach a lanyard?!?
Last edited: Apr 18, 2022

Glenn MacGrady said:
For example, I've been in shipping channels and the Florida Intracoastal with my sea kayaks and outrigger canoe with with big ships that I may have wanted to warn of my presence. Same with roaring power boats, jet skis and airboats in lakes or rivers—maybe with distracted or drunk drivers—bearing down or coming too close to you or your kids.
Click to expand...

Do you think any of those big ships see or hear canoeists? I've paddled in the 10,000 Islands and even the tour boats scare me to death. I also don't think they can steer quickly enough to miss a canoe even presuming it was seen. Just the motor boats are to be feared. My greatest terror is crossing the channels solo. Don't go out there much anymore now that I live inland.

It’s known to be so loud, that it wakes up Chalchiuhtlicue, the goddess of water and gives good surf back to camp.

ErktheRed said:
in case anyone is still looking for a loud whistle to strap to their PFD

It’s known to be so loud, that it wakes up Chalchiuhtlicue, the goddess of water and gives good surf back to camp.

That thing needs its own PFD.

I bought a couple monstrocities that are advertised as loud (including the Storm), but I couldn't make them as piercing as they should be, and they were huge, hard to make work in water. How do these whistles perform WET! I can see needing rescue in int water. The big orange ones, that were supposed to be the cat’s meow, are hard to get a peep from when wet. The Fox 40?
Last edited: May 7, 2022

I got the Fox 40 micros for the kids. My son is extremely enamored of it and took it with us on last weekend’s trip to a dance competition. The night we all got to the hotel, the kids were in the pool. When it was time to get out to eat, I let my son blow the whistle to get everyone’s attention. It’s loud! Worked swimmingly.

Ditto
You must log in or register to reply here.