I have an experiment I want to try using a small parawing. At least 12’ long on the taller “ridgeline” axis, or maybe 14’ at most. But every wing I’ve found is either too large or too pricey to hazard for an experiment.

I’ve been through enough unsatisfactory tarps to appreciate functionally designed and strengthened tie down points that resist ripping out in the wind, and I intend to expose this experiment to wind and rough treatment. If I knew this experiment would work I’d pop for a CCS Tundra Tarp, but I’d rather have a simple wing.

I have an old true-catenary cut parawing, with no tie downs other than doubled webbing loops at each corner, it is bombproof in the wind and rain and is inherently easy to set up. Even in two-pole no-tree configuration as long as the guylines extend out aligned with the perimeter edges of the <> tarp it is wind shedding no-flap solid even in extreme conditions.

That long-ago Campmor branded cheapie is simplistic in design and packs relatively small for urethane coated nylon, but it’s an 18 footer and is several feet too long on the axis ridgeline for my purposes.

I’ve Googled and searched with no success. Every decently thought out parawing I’ve found is too big. What’s out there in small wings?
B

Kelty Noah's Tarps. I've used one with a cheap mosquito bar as my primary solo shelter for 15 years.
G

Here's what i have learned, i was only interested in moving as fast as i could paddle
Sit on the bottom of the canoe.
Remove the center thwart so you can easily move fore and aft.
I needed to use lee boards on my 17 foot canoe.
I used a 2.6 sqmeter kite,(two line) could have used an even smaller kite but the small kites are very quick in the air.
It was more effort than paddling and every time I tried it with gear or a passenger I essentially lost control
The kite I used pulls strong enough to drag me through beach sand.
G

Richard1726 said:
Here's what i have learned, i was only interested in moving as fast as i could paddle
I needed to use lee boards on my 17 foot canoe.
I used a 2.6 sqmeter kite,(two line) could have used an even smaller kite but the small kites are very quick in the air.
It was more effort than paddling and every time I tried it with gear or a passenger I essentially lost control
Click to expand...

Richard, I’m thinking about adapting a small parawing tarp for multifunctional use in camp.

I tried the sailing thing years ago when I was into kiting and while it worked it was too awkward for my purposes. I could only go a few degrees off straight downwind, even with a dual-line kite, and in iffy breezes the kite needed constant attention lest it plummet to sea and leave me with 100 yards of string to collect en route to the downed kite. Plus my larger kites were expensive to hazard losing in wind and wave.

The auxiliary tarp adaptation I have in mind is to find something, if need be cut and sewn retrofitted, to use as a wind block at one end of an 18x18 parawing tarp. I have a decent solution for blocking the wind at one open end of a center line ^ hung flat tarp (Tundra Tarp), but something that will install as easily and work as efficiently for a parabolic wing shape remains elusive.

I have a peculiar penchant for windy places in the off-season, where sheltering from the constant breeze makes a huge comfort difference. I’d like to be able to windblock one end of the wing with minimal fuss (ie, easy to “install” and secure) or move from the tarp end to windblock a chair, hammock or even campfire as needed.

I agree that kite sailing can be as much effort as paddling. Likewise I’m not interested in going fast under sail (although I have), or in anything beyond simply sailing downwind when fortuitous breezes present themselves, or in installing leeboards or anything else I can’t easily manage quickly while still on the water and underway.

I’ve tried a bunch of different sails and for my simplistically simply downwind desires nothing comes close to a Spirit Sail.

Mike,
have you tried Lee Valley Tools here in Canada?
they just brought out their mini catalogue for June, and have 2 triangles and a square shaped sail that may be what you are looking for. Their catalogues are all on line. Good luck, and let us know how you make out with it
momentum

I had an opportunity to try a wind end-cap on the parawing. Like many of my ideas this one proved an utter failure.

There are several downsides to a parawing tarp. There is a lot of unusable/wasted space – the low ends are too low for anything but gear storage, and even then it’s a crouch to get down in there. The diamond shape <> loses a lot of coverage on the corners, more with rain-blown wind.

Where a true catenary cut parawing shines is in being bombproof and unflappable in the wind. When set up properly it becomes, well, a wing, with the windward side concave and the back side convex.

The winds there were in excess of 30 mph and probably gusting 40, funneling straight up a narrowing canyon. I was waiting for a seam to blow or a bow-string taut line to snap, but the harder it blew the more the tarp “settled in”. That true catenary cut seems to distribute the load evenly across the fabric and the seams never seemed stressed.

I cut up a crapped out blue poly tarp as a cheap end-cap experiment. Cheap was good because it was a failed experiment. Blocking one end of a wing for added protection disrupts the airflow; in anything but mild winds the wing flaps and the stress points are obvious.

Blocking the open side of a flat tarp works far better.

I’ll still opt for a ‘wing in certain circumstance – when solo or with a single companion, when the reduced coverage doesn’t matter, or in extreme winds, when the design helps keep the tarp erect and in one piece.

I’m not done with the wing experiments just yet. I have another idea that might prove just as useless in practice.
G

I once had a Noah's Tarp and hated it. I could find only one way to put it up without having to take up a lot of slack, and then the coverage was minimal, as Mike says in the post above. I've found that a rectangular tarp can be set in several ways that work fairly well to block and rechannel wind. 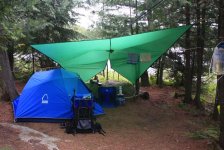 This one held up to about 40 mph and then one of the tabs started to come loose. 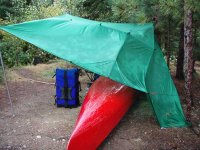 I originally staked this little blue tarp down to the ground when the wind was 30-40 mph. I raised the bottom to reduce pressure on it and cut the backwash (vortex). During the night it deflected 50-70 mph winds. The backwash on the tent bent the poles inward but luckily they didn't break. 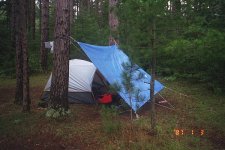 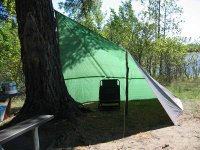 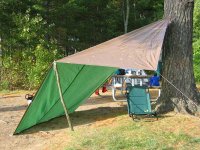 These last two are from my recent Boundary Waters trip. The tent channeled the 20-30 mph wind above the tarp. The boat was the best windbreak of all. 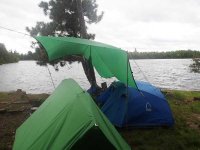 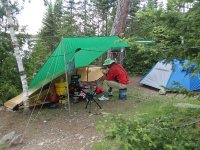 Hi Mike, I'm pretty sure I'm missing what you're trying to do; never really understood the reasoning behind the cat cut tarp.
Howsomever, I do get the idea that a tarp gives shelter and one of the adverse conditions a tarp must buck is the wind.

This last weekend I was playing with my little 2-man Timberline tent and a 10' x 10' Hilleberg (the tent maker) tarp. I set the tent sideways to the wind and pitched the tarp with one side overlapping the tent and the down wind side tied out nearly horizontal. The ridge line on the tarp and the centerline on the tent were parallel. The idea was to provide a sheltered spot to do my outside cooking and lazing about (down wind) My very rough rule of thumb is that if something breaks or a seam rips out while I'm experimenting, then it probably would go during an all night storm and better to find it out now.

So...we had some winds est. 30mph with higher gusts. My tarp looked a lot like your blue tarp: catching a lot of the wind and looking very much like a sail. Nothing broke loose or ripped but the whole rig was under quite a strain. Then I got an idea: if I could break up that steady push of the wind it might help. I placed the canoe upside down just on the upwind side of things. The effect was something to see, the pressure was off the tarp and tent. There were some gentle ripples in the tarp from the wind but nothing like the pressure that had been before.

I'm guessing now but maybe I introduced some "burbles" swirling tumbles of air that disrupted the steady push of the wind. Anyways, it seemed to work.

That's all I know and a little bit more, Rob
G

oldie moldy said:
I'm pretty sure I'm missing what you're trying to do; never really understood the reasoning behind the cat cut tarp.
Click to expand...


My rational for using a cat-cut tarp is based on quickness of solo set up and high wind performance. The cat-wing has proven to withstand severe winds, and my paddling places often seem to involve high and unbroken winds,

oldie moldy said:
This last weekend I was playing with my little 2-man Timberline tent and a 10' x 10' Hilleberg (the tent maker) tarp. I set the tent sideways to the wind and pitched the tarp with one side overlapping the tent and the down wind side tied out nearly horizontal. My very rough rule of thumb is that if something breaks or a seam rips out while I'm experimenting, then it probably would go during an all night storm and better to find it out now.
Click to expand...


In my retiree “Slow Down. Pay Attention” mode I’ve become more attuned to setting up tent and tarp for wind and sun protection, but space limitations don’t always allow for the best orientation. It’s a rare site that allows for the ideal positioning of tent, tarp, kitchen and fire pit

Ideally, in order of ciriticality, I’d like a well-drained tent site with a tarp location in rain-dashing distance to the tent/ gear stash vestibules, One or two trees in handy tarp spread distance. Some wind protection in camp (or not, if it’s buggy).. An easy canoe landing that isn’t a half-mile from the campsite. Dancing girls and a stash of $1 bills.

I usually settle for partially fulfillment.


oldie moldy said:
So...we had some winds est. 30mph with higher gusts. My tarp looked a lot like your blue tarp: catching a lot of the wind and looking very much like a sail. Nothing broke loose or ripped but the whole rig was under quite a strain.
Click to expand...


It’s mostly the strain on the seams that concerns me. I’ve had the CCS Tundra Tarp up in winds that destroyed a Hennessy Hammock rain fly in gusty seconds. In the time I took two of us to PDQ re-rig that flat tarp pin-holes of daylight had begun to appear along the stitched seams. (I had sil-nylon seam sealed it before the trip. And did so again after)

I like the idea of using the canoe hull as a wind break/deflector. In places where the landing-to-camp distance isn’t over long I’ll give that a try.
You must log in or register to reply here.