Really enjoying the great trip reports from folks being posted so far. We're getting hit with the white stuff today and most people are staying at home. So thought I'd add another report from warmer days...this one from August 2010. Might be useful for southern Ontario folks looking a short loop. Southwest of Gravenhurst is some Crown Land, part of the Severn River Conservation Reserve. The main access lake for this loop, Nine Mile Lake, is heavily dotted with cottages but the other finger lakes in the region allow for some pretty decent camping. After securing a vehicle at the public boat launch, one heads southward to the mouth of the Gibson River which begins a meandering flow through wetland marshes. At this point one loses sight of any other folks and I would spend the next 4 days with only an occasional bushplane flying to the nearby fly-in fish camp on the adjacent lake system to disrupt the serenity. I'm not much of an ultralighter, so brought along a lot of luxury foods and gear. Portages are very short (longest = 650m) so a double carry wasn't a waste of time. Plus I'm never in a rush on these sort of trips.


Start of the Gibson 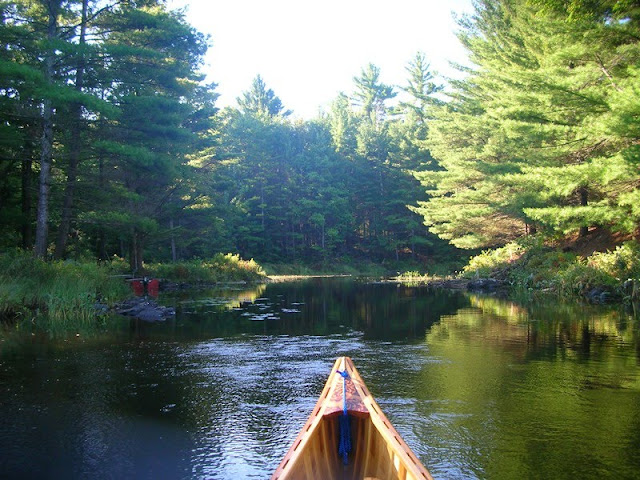 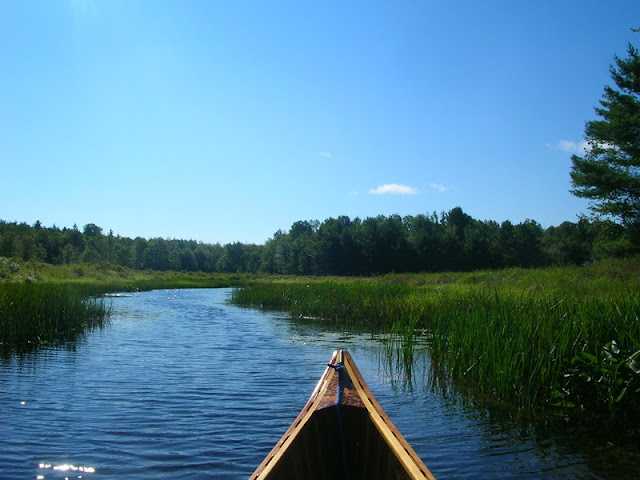 In some places the river narrows to just a width of canoe only to open up again. Water levels were typically low this late in the season, but thanks to the efforts of many beavers, the majority is the river is certainly accessible by canoe with some minor lift-overs and 3 short portages of 75 meters or less. It was over this marshy territory that I spotted a pair of provincially significant Red Shouldered Hawks with their nervous "Kee-Ahh" shrieks. Very cool. Beaver dam holding back a pond 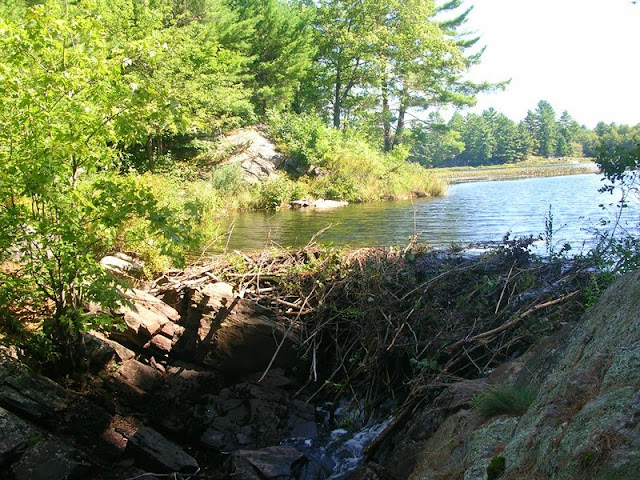 Made it though some of the portage sections with plenty of blown down trees and overgrown trail heads meaning not too many folks come down through this route. After this point, the river empties into a series of long, narrow lakes that loop back in a generally northwest direction. The lakes tend to have sloping granite shores making landing a bit of a tricky affair. 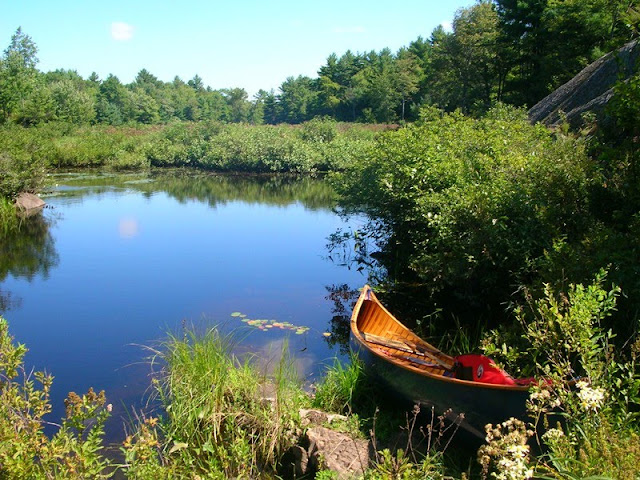 Somewhere in there is a trail 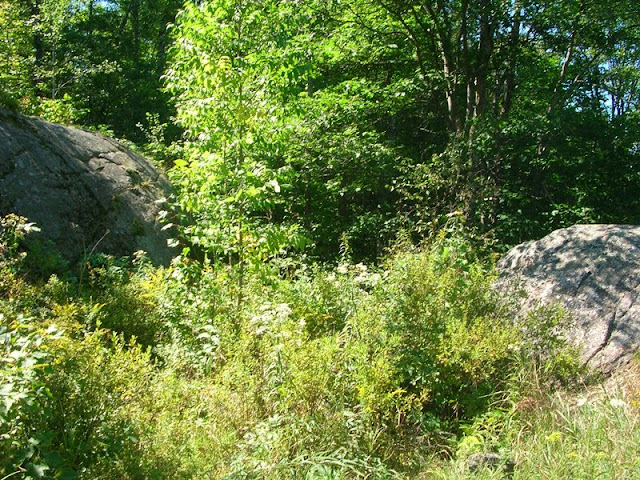 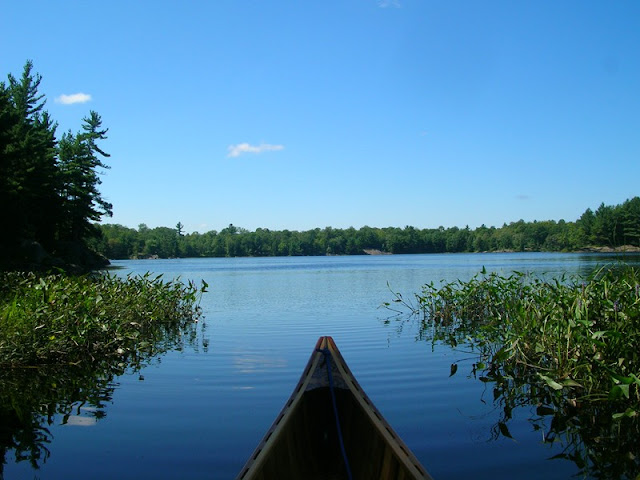 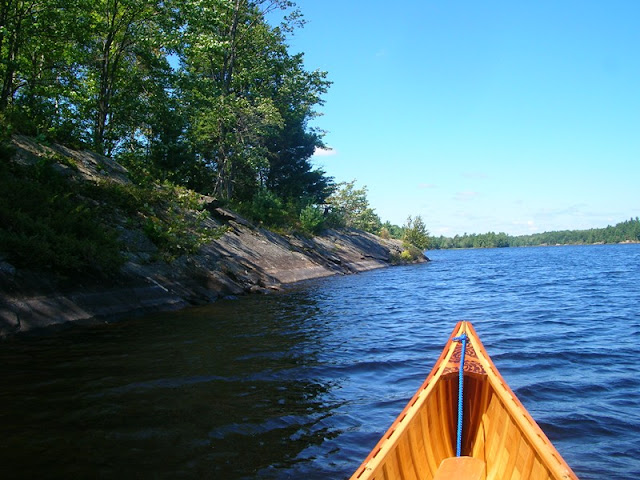 Managed to find a very clean site on a small peninsula on Woodland Lake that gave a fantastic 3-sided view of the water. This site has been frequented by other folks who've rigged up bush kitchen table and decent firepit so the site has an established feel but at least it was spotless on arrival. Set up my Hennessy Hammock shelter in a protected area away from the kitchen. Nice night sleeping to the sounds of a nesting Whip-poor-will and the haunting "Who-cooks-for-you, who-cooks-for-you-all" hooting of a Barred Owl 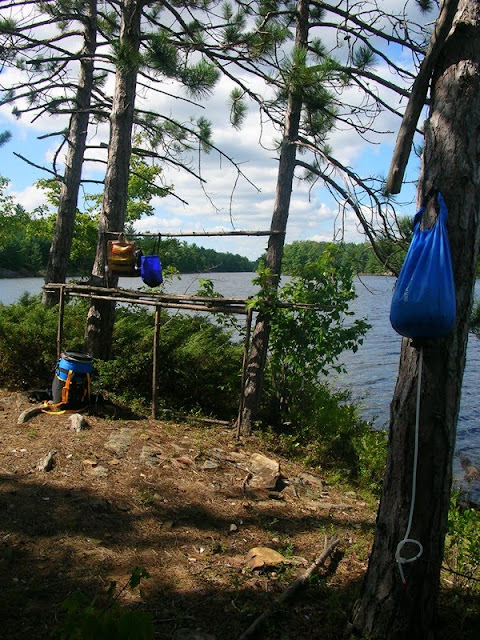 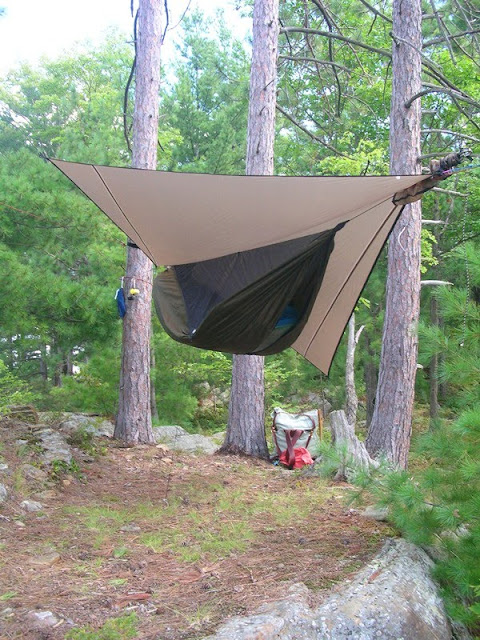 View from the hammock 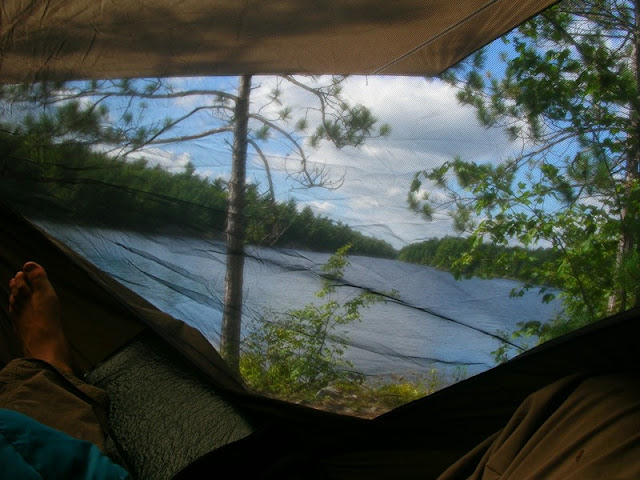 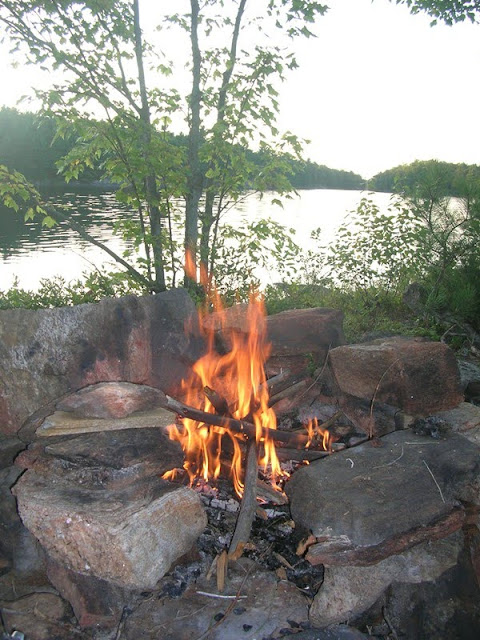 Spent the next day huddled in camp as rain moved in. Stayed totally dry in the hammock with its strange asymmetrical rainfly design. Once the steady rainfall relented in the late afternoon, the winds changed and started blowing icy cold from the north. To get any cooking done, I set up a tarp windblock behind the firepit so rigged up a modified Diamond fly with a high peak but low profile. This worked to use the cooking stove that evening. Got down to 7 degrees Celsius that night but seemed chillier with the relentless wind. 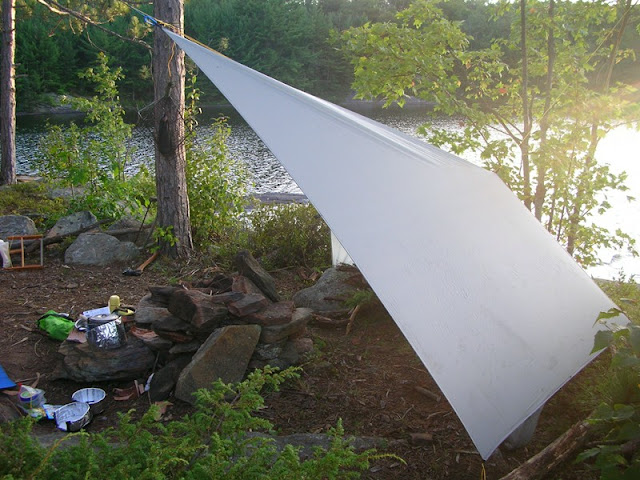 Thankfully the sun came out the next day, but the winds still blew from the north (my direction of travel). To get to the next series of lakes in the loop involved a short wading through a boulder infested channel and another more significant uphill portage that follows a pathetically flowing waterfall. 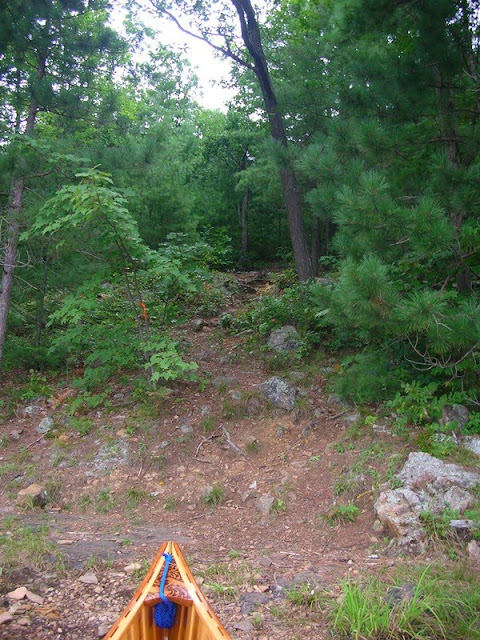 Packed up for the climb 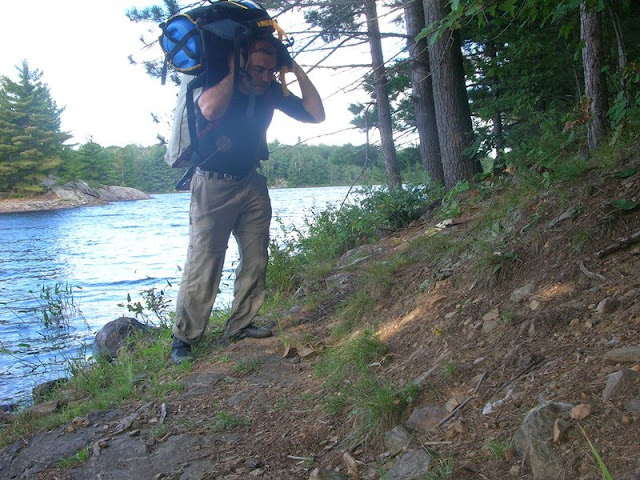 Reaching the top of the climb, I realized why the waterfall flow was so minimal. The largest beaver dam I've ever come across had flooded the forest floor and created a mini lake. It was eerie paddling through the stand of flooded birch that followed... 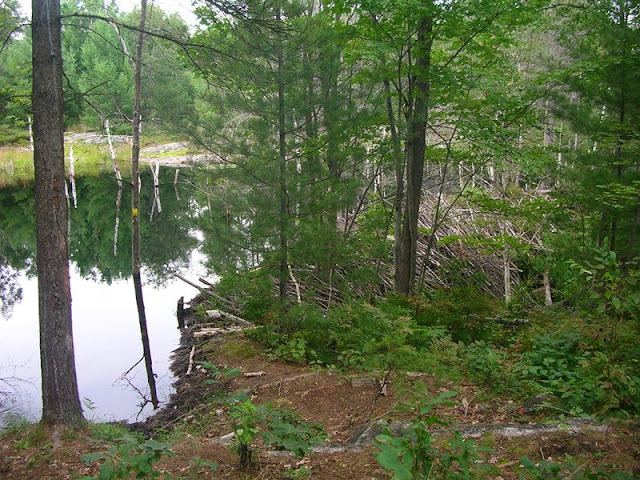 Shot of the dam closeup 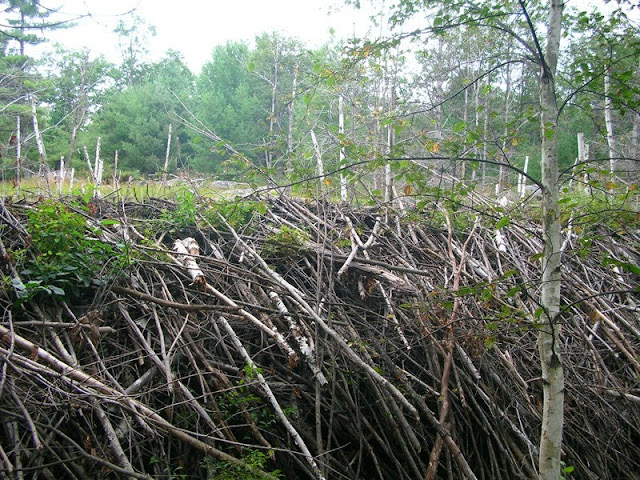 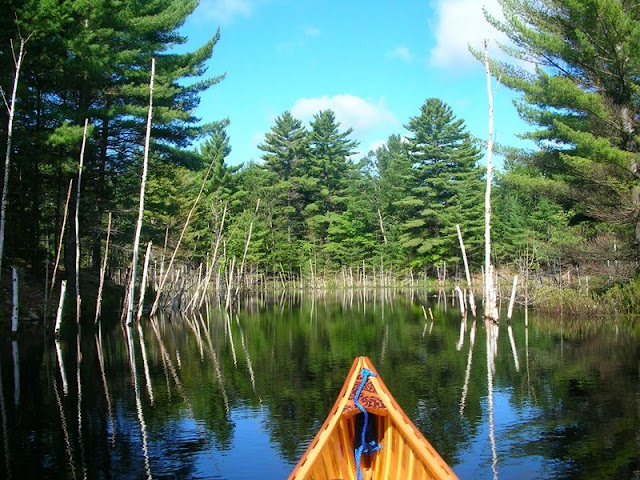 Sure enough I spotted 2 beavers busy at work although they slapped their tails and fled underwater to safety before I could turn the camera one. Oh well. The next lake had some wonderful rock formations and much evidence of more wildlife. Headwinds certainly made getting to shore for camp a pleasure. Managed to find a small sheltered site. Of course, sheltered also means the bugs come out ferociously so dinner had to be eaten on the windy point with a cap and wool sweater to beat the flies and the chilly north breeze. 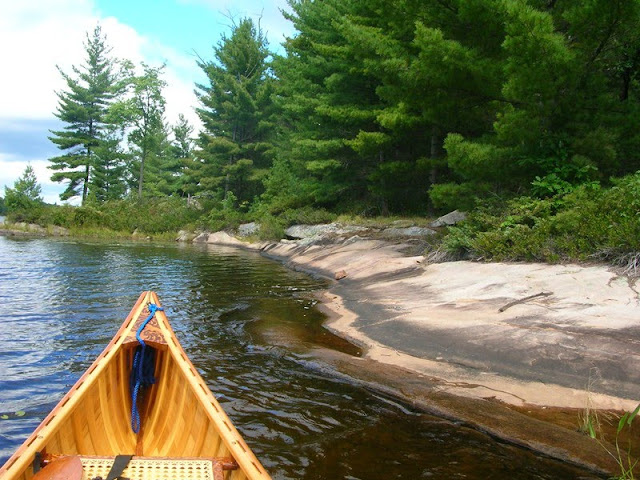 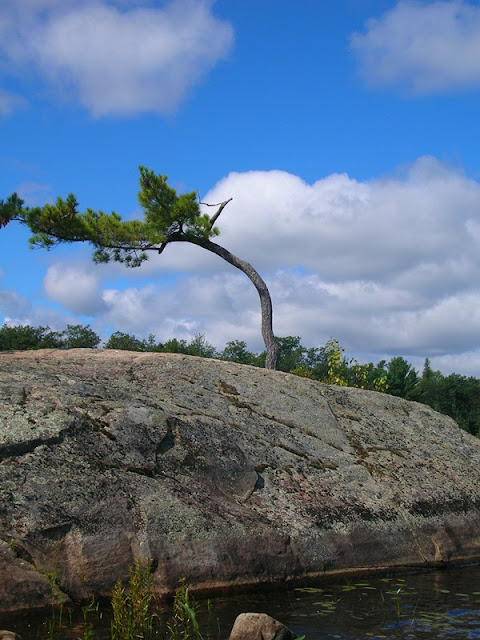 Dinner on the point 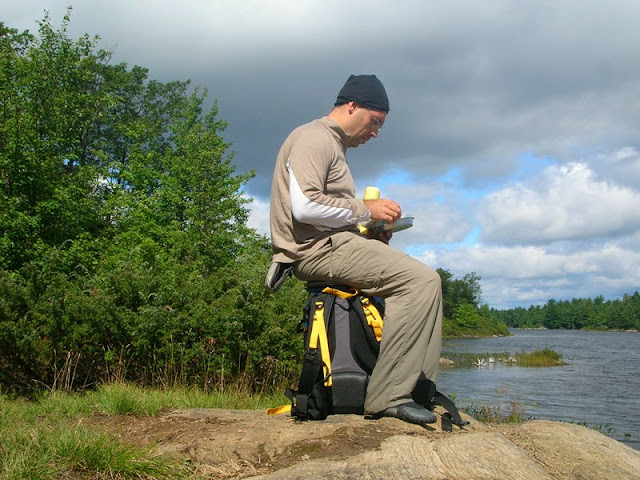 The next day involved the longest portage of the trip - a mild 650 meters or so through some uneven terrain that also serves as a snowmobile trail in the winter. While lugging the gear for the first carry, I came across a pair of boots, then a single sock, then another, and then a pair of pants! This weird bush strip-tease had me convinced that the only human I'd encounter on my trip was some sort of frolicking nudist perv catching unwary canoeists at the end of the portage...very grateful that my solo trip remained a solo trip when no one came out of the bushes to reclaim their clothing. 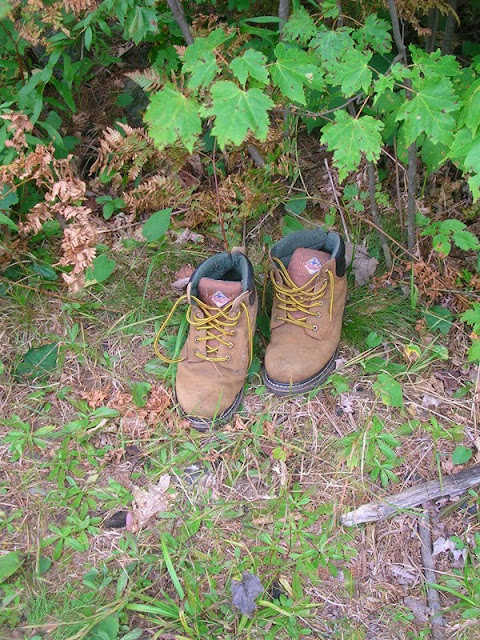 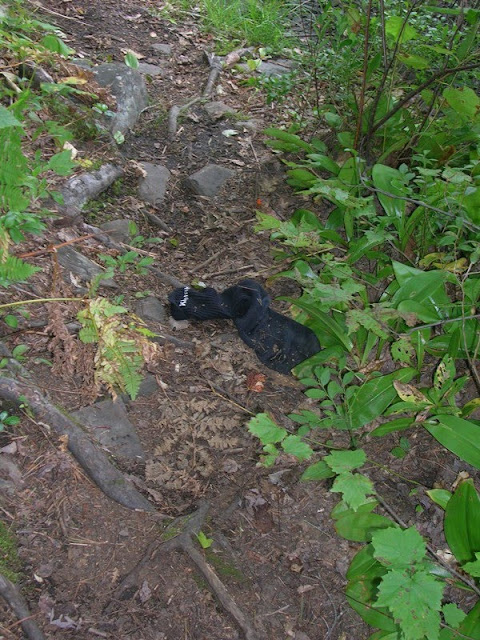 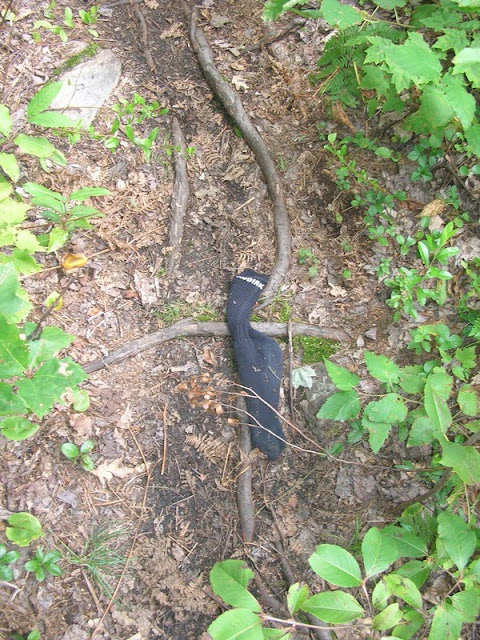 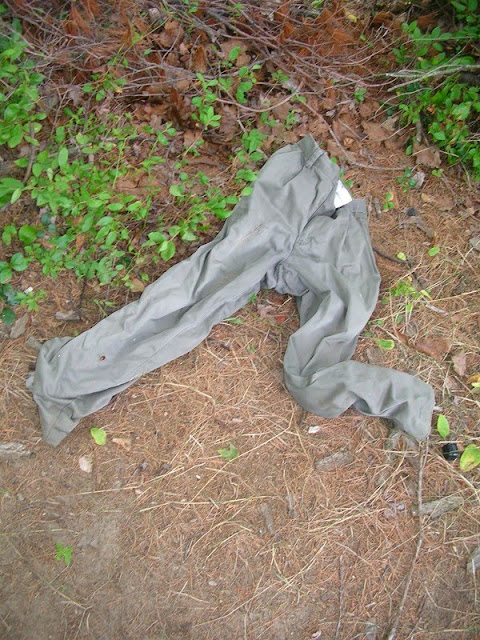 Who loses their pants in the bush?


On the last leg of the trip, the sun came out and warmed the remainder of the day nicely. Here's the gear and canoe at the end of the final portage before the uneventful paddle back to the public launch. 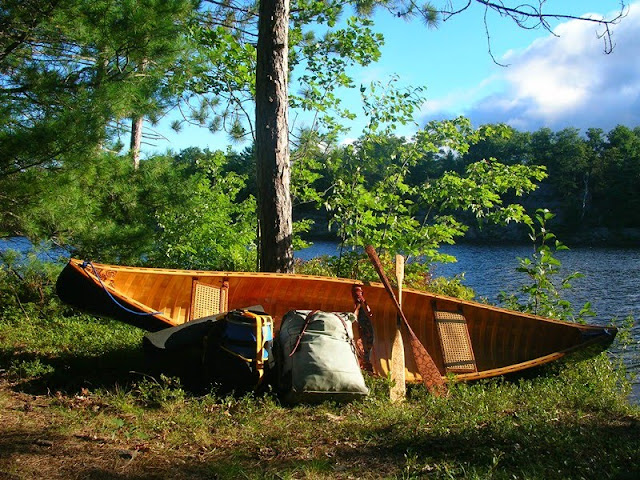 I'm experimenting with the Gmap4 website: Clicking here should open a new window with a top map and the track route for anyone interested...

Nice! Looks like you have that map site figured out. Did you keep the boots? They didn't look in too bad of shape!
G

That is a great trip report and you're right about the size of that dam. Weird about the clothes, huh? I hope their owner didn't die.

Boy those are some real nice pics ... beauty! I really like your canoe as well ... who makes it - it looks like the Ami (sp?) from Stewert River? How do you like your hammock? I have used mine for about 5 or 6 years now and I really like it.

Nice pics. I am a happy Hennessy Hammock owner as well. There's nothing like crawling into that set up when your body is tired and achy. Dave

Didn't keep the boots - they sure did look pretty new. Figured the guilty party would eventually find or be re-united with his clothes. They were right along this well used portage trail.

Finding the Hennessy Hammocks are a very comfortable way to sleep on rocky terrain. This area didn't seem to have many obvious tent spots and when it did, had lots of rocks and roots everywhere. Overall a good investment for my tripping needs.

Bob B - the canoe is a small 14 footer I built on a course with Pam Wedd of Bearwood Canoes in nearby Parry Sound, Ontario. Tiring work for a novice like me to churn out a canoe in 9 days but a great learning experience. Its certainly not meant for hardcore backcountry journey but this trip seemed mild enough to take it out for a quick 4 day jaunt. Stewart River does make some beautiful looking boats and gear - I've purchased their kneeling and portage pads for my other cedar canvas.

Ok, yeah I have lusted after Pam's boats for years. Your canoe is a beauty, you did a hell of a job. There is nothing like paddling a wood canvas boat ... to me it feels so much more a part of me while on the water. I wish I was more handy, I would take mine deeper in the back country ... alas, I am such a putz!

My son and I spent a weekend paddling the Severn Conservation Reserve in late summer 2011. A very beautiful area, and feels quite isolated considering you're right in the middle of cottage country. Unfortunately we had a lot of rain, but on the plus side we did manage to catch a nice bass for lunch. Here's a little video of our excursion: