Friend Joel was cleaning out the old stuff from his over packed gear storage. 40+ years of stuff accumulated while running a couple outdoors gear stores and paddle shops. I was bummed that I couldn’t manage social distancing and help out, but asked him to save certain items for me, mentioning “save me slender tent poles and guide books”.

No shop time as usual, but we managed to enjoy a mask-less social distancing driveway visit. I guess I could have at least offered him a real chair. 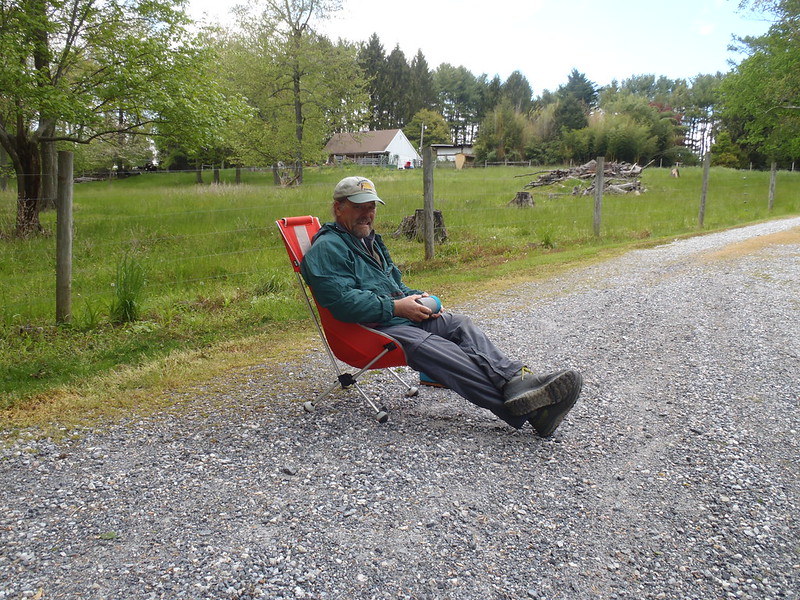 Joel left me lots of goodies, to keep and to share. 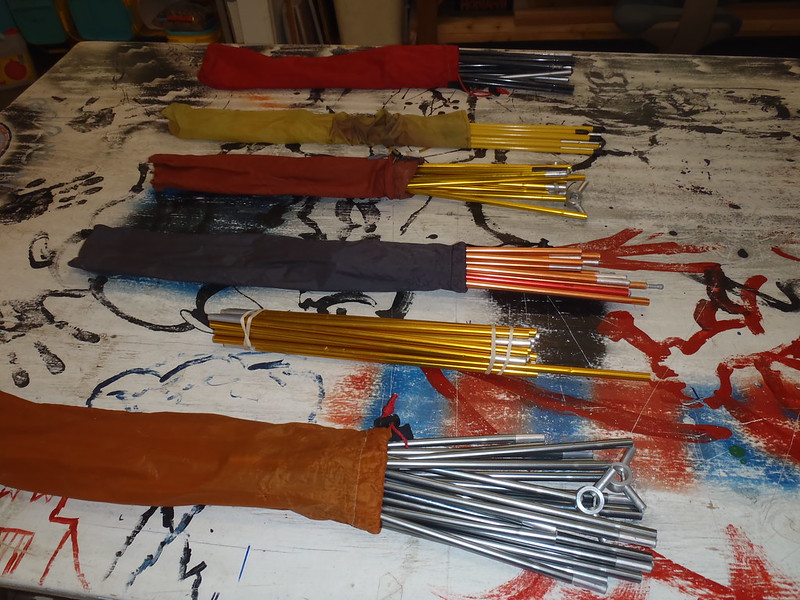 I expect Joel, whose gear memory is astonishing, will be able to identify the makes/models from that photo and I’ll Sharpie ID the pole bags later. If anyone needs a few replacement poles or spiders for modern tents, or a full set if you really effed up, hit me up. (I’ll keep the MSR Hubba Hubba set; we own two of those tents). One set at least goes to a single-person Hubba.

Yes, Joel has a lot of modern tent poles; he (and clients) use his tents hundreds of days a year, every year, in harsh environments, and his lightweight tents wear out before the poles. Some tent manufacturer really should pay him to field-test their gear; Joel has an exceptional mind for gear design, and for design flaws.

Along with the bags of shock-corded/spidered tent poles he brought me a bag of a dozen 3 foot sectional telescoping tarp poles. Those need to find a good home, but I’m not mailing them. 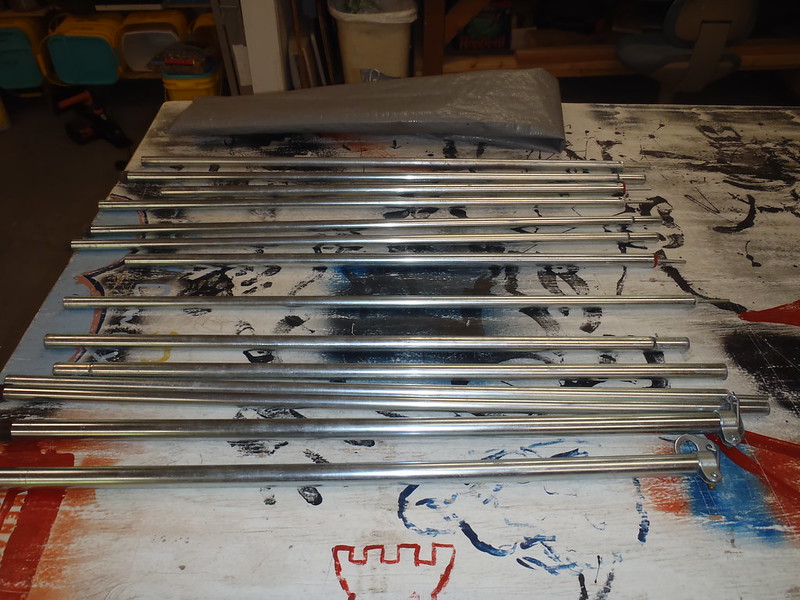 We have a half dozen of that style telescoping tarp poles no longer used in storage (Kelty poles now, and until something better comes along), including a specialty center-pole with a ridgeline eye screw epoxied at the end. The ridgeline eye screw prevents a center pole from falling over when the tarp lofts in a gust of wind.

Been a long time since those telescoping poles were used. I really should have used a stainless eye screw, and may set one of those Joel poles up the same way before they go bye bye. That new batch of tarp poles needs to go to a good home. 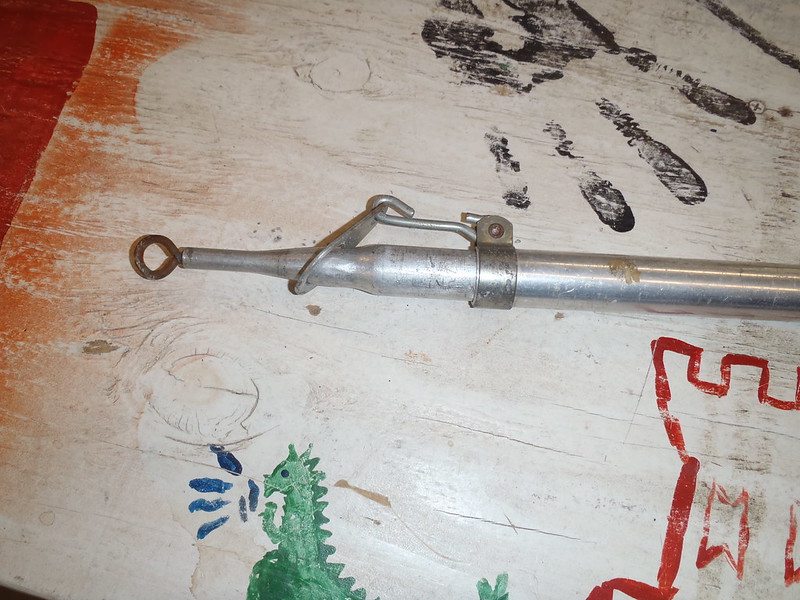 What else? Some miscellaneous outfitting treasures; a virgin deck cap, couple of paddle tee grips, a stopper ring for a sliding seat rail. And the world’s sturdiest gunwale clamps, from Spring Creek Outfitters. 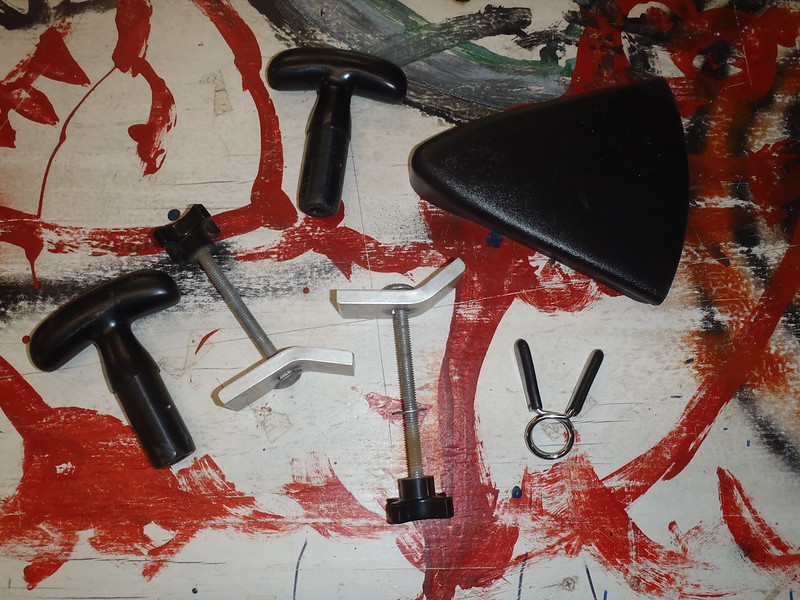 I’ll keep the gunwale clamps, and add them to my collection for future use. I don’t really need another sliding seat lock or plastic tee grips, and have a box of large vinyl deck plates from OT’s MRC’s and Mohawk’s. Not a fan of small deck “caps” anyway, so. . . . .

A pair of Old Town oar locks? I can’t imagine ever using those, so more “Free to good home”. 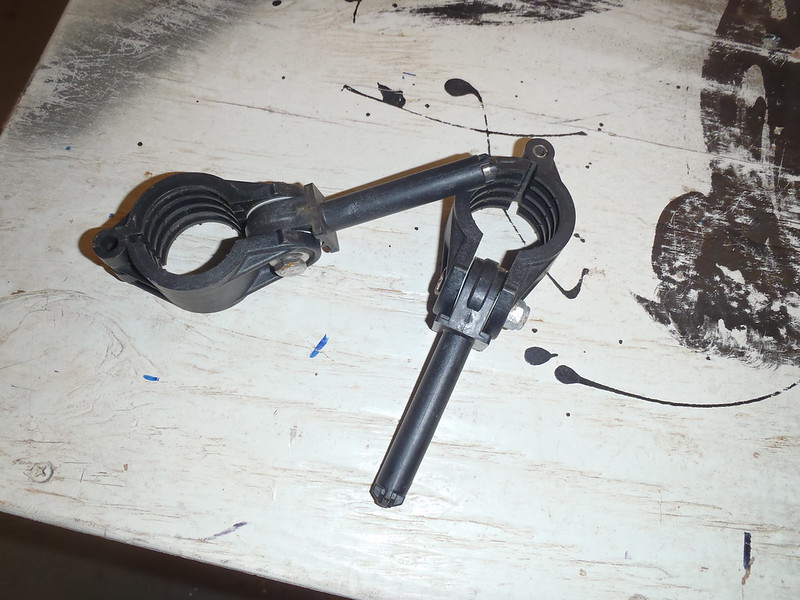 As requested and most interestingly, to old guidebook aficionado me, dozens of old paddling and hiking guidebooks. Shelving the ones I do not have, these are left up for grabs. BTW, Joel tells me he forgot another box of old guidebooks, so expect more eventually. 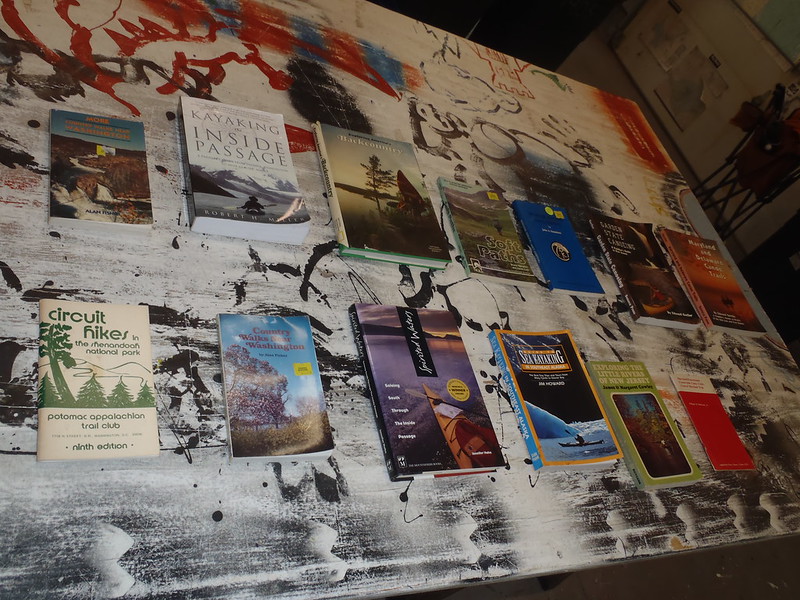 Maryland-Pennsylvania Countryside Canoe Trails: Central Maryland Trips (1974) William Robinson
(Got one, a classic, the first paddling guide I ever owned. 25 pages slender, priced at $1. Bought in 1974 at a rural Esso gas station near a PA put in. ($1 was three packs of smokes or three gallons of gas at the time; I must have really wanted it)

The Gertler Bibles for MD and NJ. Maryland and Delaware Canoe Trails (1989), and Garden State Canoeing; a Paddler’s Guide to New Jersey (1992). We have multiple editions of each and our guidebook shelves are tight as is.

Exploring the Little Rivers of New Jersey (1971), James and Margaret Cawley. Already got one, love those early 70’s guidebooks. Look Ma, no PFD’s, even on the cover photo.

Guide to Sea Kayaking in Southeast Alaska; the Best Day trips and Tours from Misty Fjords to Glacier Bay (1999), Jim Howard. Not happening in this lifetime, and it has That-Which-Shall-Not-Be-Named in the title (TWSNBN)

Circuit Hikes in the Shenandoah National Forest (9[SUP]th[/SUP] edition) Potomac Appalachian Trail Club. Great little guide book, we have dog earred the crap out of ours and this copy is pristine.

Soft Paths; How to Enjoy the Wilderness Without Harming It, (1988), National Outdoor Leadership School. I may need to page through that one first for 1988 funsies. And then go hug a tree.

Winter Hiking and Camping, (1982), Adirondack Mountain Club. Also not happening. I don’t know if anyone has yet realized this, but it is freaking cold out in winter.

Freebie books first. Media/book rate shipping within the US is relatively inexpensive. If anyone wants/needs one of those guidebooks please PM me a mailing address.

I’ll pay the postage, the deal is this; when the site fundraiser comes up again next year please toss a few extra dollars into your contribution. Apologies for the US-only shipping.

If someone really needs modern tent poles, plastic T-grips or a pair of Old Town oarlocks we can work something out. Telescoping tarp poles available for pick-up only.

Pick of the litter goes to the first person with a semi-accurate word count for this post ;-)

Hi Mike. I am interested in a bunch of the books. I tried to pm you, but it says your quota is exceeded! If books are still available, please advise. Thanks, John Blaser

Same here, Mike. Those three with TWSNBN (no,not going to the dark side).
G

I cleaned out my message box. Probably; I didn’t delete every “Notification”, not sure exactly what the “quota” means.

Lance was first with an accurate word count, and asked for the Shenandoah Hiking guide. Lance, the telescoping tarp poles are yours as well; I’ll just hang on to them ‘til we meet up again.

John, the Maryland and New Jersey paddling guides are yours, and the DC hiking books your daughters. I received a “visitor” message from you with your mailing address and will send them next week.

The DC area hiking guides are all the same size (4” x 7”) and I’d be happy to send them separately to your daughter, which might make for easier media rate packing. If that works for you just PM me her mailing address.

Steve, the three TWSNBN Inside Passage books are yours. Try me again with a PM for your mailing address.

Hi Mike, I tried to PM you with my daughter's address but got the same error so I just posted her address there. Thanks very much for everything! Be well.

Hi Mike- I would be interested in the oar locks. Really generous. Thank you.

I wish the poles(4) could migrate to Maine.. We used to have some and in some moment of insanity we jettisoned them I have NO idea what we were thinking. Then we got a Nemo Bug tent which came without poles. We were able to get some skinny chinese knock off poles that will work but frankly if the wind blows hard they will snap.
L

Thanks, Mike And thank you to Joel.

If the virus issue calms down enough we're headed to Lancaster for a long weekend at the end of the month to visit the son who recently got married. I'll plan on swinging by the way home so you might as well hold onto the book too. Maybe that'll give Rosie another chance to try and squeeze through your cat door in search of your cat

Best regards to all,

John, I got your and Adrienne’s mailing addresses and will mail out the books next week.

Lance, I’ll hang onto the book and poles. We can sit outside in the yard and social distance mask-less for a spell. Give me a heads up and I’ll set out some camp chairs; you can try the ALPS leisure Chair.

Steve and Bob, I have deleted every Private Message, Visitor Message and Notification in my Canoe Tripping account and received a couple of Visitor Messages from John, so try me again with your mailing address as a Visitor Message.

If that doesn’t work try my Gmail account. Which is my last name + paddler (all one word).

John, Adrienne and Bob, your packages of books and oar locks will go out tomorrow.

Bob, you will need to buy or DIY the “sockets” for those oar locks; if Joel had them they got tossed. I threw a couple or four other non-related trinkets in the box, just ‘cause I liked the rattle.

Those OT sockets are sold separately.

I, and Joel, would love to see a photograph of those oar locks in use on a boat.

Steve, I promise I won’t do that, the Inside Passage TWSNBN books are currently wrapped in plain brown paper. See post #9 for an e-mail address hint, or ask DougD.

Thanks Mike! You’re the best.

Steve, I promise I won’t do that, the Inside Passage TWSNBN books are currently wrapped in plain brown paper.
Click to expand...

I still wonder why Steve in Idaho was reluctant to give me his mailing address for those freebie guidebooks. I mean, I promised not to send him a DougD style faux-labeled package. 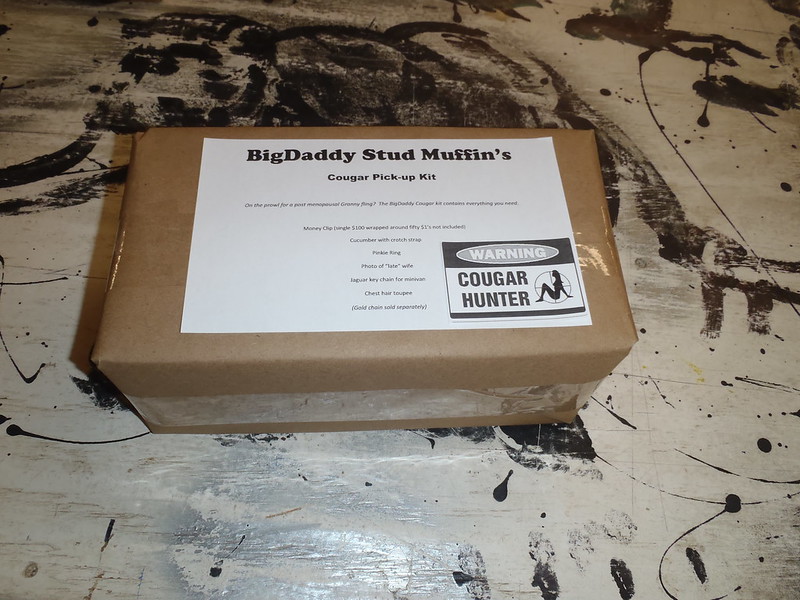 Enjoy those glittered mil-spec stakes and Thule Load Stops. Dammit, I should have glittered up the load stops.
You must log in or register to reply here.