I've always been a bit enamored with the concept of the whitewater canoe saddle. I however, never had purpose to test or install one as I generally paddle flat water, own longer boats, and when I kneel it is in a heeled boat Canadian style.

That being said I have wanted to try a saddle and the boat I posted about before needed some outfitting so now was an opportunity, at least I though so, until I saw the prices they run for.

Saddles are wildly expensive for something you need to then shape to be comfortable and in the process can be readily destroyed by overzealous shaping. I couldn't risk the money or time for something that I wouldn't make use of.

I saw pictures of the Stingray Kneeling Saddle online and thought I could make something similarly shaped and portable. Inspired by Mike McCrea's drink holder I had found the perfect material; yoga blocks!

I had found a company where I could get yoga blocks for $4 a pieces shipped. This is well under half of what the equivalent volume of minicell foam would cost so I bought 10. The blocks are approximately 4x6x9.

My goal was to build an alternative to a kneeling thwart. I won't need the full control of a WW playboat but I do need enough support to allow my knees to rest. While most pedestals seem to be about six inches wide and about eight inches tall, I decided to go quite a bit bigger using 9 inch width and about 10 inches tall to allow room to remove material and some extra comfort.

I used 3M Super 77 to glue the blocks together. I tested on two blocks and the Super 77 held up better to my child's abuse than the manufacturers adhesive so it should be fine going forward. This also showed that I could peel the blocks apart giving me a 4x5x9 and a 4x1x9 piece increasing the layout options.

I tried a few configurations. Ultimately, I settled on what is pictured. One late solution was to use velcro to connect the top two blocks that I will be kneeling against. This was stolen from a homemade saddle I found for sale online. They intended the velcro for you to adjust the seat fore and aft. I am hoping to allow different blocks for different size paddlers or to allow me to adjust the size and shape without risking spoiling the whole saddle. The velcro is the industrial type you can get at any hardware store. I also carved a grove in the bottom to accommodate the keelson on the boat. Last benefit here is when removed the remainging pedestal makes a decent seat and allows a lower sitting position for paddling with legs forward during rest.

Finally, to make it portable and usable in any of my boats I attached the hook side of the velcro to the bottom of the saddle. It turns out the cheap commercial entry mats are essentially all looped polyester which the velcro grabs as well as anything else. I already kept a mat in my car for loading the boat and placing on the floor of the canoe to keep gear from clanging and scraping. This keeps the saddle in place under me while the rubber mat base keeps it from sliding in the boat.

The velcroable floor allowed me to use the rest of the yoga blocks to make adjustable knee pads and ankle supports. I was expecting some give but nothing moves. The velcro adhesive is more likely to detach unexpectedly than the velcro from the rug.

I have yet to fit the saddle but so far it is comfortable and gives me plenty of control, at least as much as kneeling thwart. I am a bit concerned about having the saddle loose in case of capsizing but all the pieces stay together. I can't imagine portaging this. Maybe if it was stuffed under the deck of the stern.

I am now thinking of other solutions. A 5 foot long mat would allow the positioning of an easily removable seat and foot blocks for foot braces. The mat/velcro yoga block combo really allows any combination of non-permanent outfitting.

I’ve been thinking about trying something like this for a long time, except what I had in mind was a height and fore/aft adjustable bucket type seat from carved Yoga blocks, velcro mounted to the floor. Why pay the “boat shop” premium for minicell when most Walmart or similar yoga blocks have the same characteristics?

But I stumbled on three smallish slabs of minicell in a one-time deal at a very good price (surprisingly, in a boat shop), and made a fore-aft adjustable pack canoe seat from it (but not height adjustable, so still looking at this).

I also found that Super 77 works great in bonding the foam together - for the attachment I used 3M dual lock, which is like Velcro on steroids. As it doesn’t adhere to minicell very well on its own, I first contact cemented some thin wood strips to the bottom of the foam seat and stuck the dual lock to that. 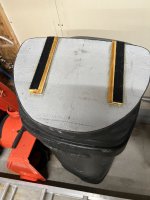 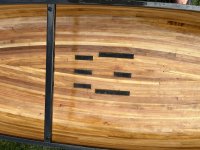 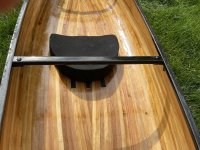 Very strong bond - attaching only to the two longer strips in the middle photo above, it is enough to let me pick up the whole canoe (just under 28 pounds) by the seat alone, but easily detachable with a sharp tug at a back corner.

If you are worried about things staying put or floating away with your setup I would suggest trying Dual Lock.
Last edited: Jun 19, 2022
A

Traveler said:
If you are worried about things staying put or floating away with your setup I would suggest trying Dual Lock.
Click to expand...

That is a good tip. I generally prefer Dual Lock for most industrial uses. I feel like its hold is more consistent and I like that both sides are the same material. If I decide to have it attached to the boat hull I will definitely use it, but for now since I am using the mat for to connect the seat to the boat I will have to rely on the hook side of velcro. For what it's worth, the velcro itself seem stronger than the adhesive and takes a good bit of force to pull apart. I might need to copy you by putting a thin wood layer between the foam and the velcro.

I might add a grommet and a leash to the mat so it doesn't become separated from the boat in case of capsizing.
You must log in or register to reply here.